Accompanying the Eurozine conference 2013 in Oslo, entitled “Making a difference: Opinion, debate and activism in the public sphere”, this focal point explores some of the aspects of building – making – a space for public exchange of opinions and worldviews. A place where anyone can make a difference.

The focus is on cultural, intellectual and political debate or, more precisely, on the production of the public sphere. The public sphere, die Öffentlichkeit, is not something given; it is made – over and over again. Therefore it is all the more important to ask who is active in this space and what roles do they play? Where does the debate take place? In which media or in which public space? Is there a difference between an intellectual and an expert? Are theory and action, discourse and protest, really separate entities or should they be thought of together?

The current European crisis has not only shaken faith in the prevailing economic system but also led to a loss of trust in democratic institutions. However, resistance is spreading: alliances are forming across academic, artistic, journalistic and activist milieus. Social movements such as the Spanish Indignados, Occupy! and Right to the City favour bottom-up production of knowledge over top-down expertise, and help to ensure that associated themes find a place in public discourse.

Some of the texts in this focal point address exactly these questions: How are research, art, journalism and activism influencing the public sphere? What is the role of traditional and new media in the establishment of alternative public spheres? What kind of influence do contemporary social movements have on social and political processes? And how do the new alliances influence public discourse?

An additional question would be: how can one make protest last? This has never been more difficult than now, writes Olav Fumarola Unsgaard in a text describing the decline of the once so strong Attac movement. While new technologies can be made to work for political change, bridging the gap between virtual and real-life activism remains a serious challenge, notes Belarus media activist Iryna Vidanava.

All over Europe, journals in the Eurozine network are in one way or another involved in activist and/or discursive attempts to influence the current state of affairs: there is Varlik’s committed take on the Gezi Park protests in Istanbul; Dialogi‘s intellectual involvement in the revolt against the political elite in Maribor, which led to a nationwide uproar; or Intellectum‘s campaigns in Greece, based on the provocative claim that “the simple translation of facts into words is outdated and words alone lack the power to attract a wider audience”. Some of these cases are reflected in this focal point, alongside attempts at overarching theories of “the new social movements” (see for example the articles by Saskia Sassen and Nilüfer Göle).

We also take a closer look at the role of experts in public debate. While the task of intellectuals is often perceived as that of opening debates (and keeping them open), experts can be brought into the discussion to end it, presumably replacing opinion with knowledge. Here there is certainly room for doubt: the rhetoric of no alternative, as recently practiced mainly by economists, is giving experts a bad reputation. What is obviously an area tainted by ideology is described as a simple choice between right and wrong.

In the field of climate change, however, the image of the expert is different; here facts and figures are thought of as an asset. While one debate might be closed by experts (Is climate change anthropogenic?), another one opens up (What measures are to be taken to try to deal with climate change?).

Werner Plumpe and Sverker Sörlin provide different perspectives on the roles of experts in debates on economic and environmental issues respectively.

Another aspect of the changing public sphere has to do with knowledge as a “common property of mankind”, as US Founding Father Thomas Jefferson put it. Currently, the large institutions involved in the production, dissemination and mediation of knowledge – libraries, museums, universities, media – are redefining their roles in society. Or, rather, they are reformulating their strategies for fulfilling these roles. Digital super libraries Europeana and the Digital Public Library of America are finally catching up with private endeavours such as Google Books. Yet it isn’t only the big institutional actors that are driving this process forward: small-scale, independent initiatives based on open source principles offer interesting approaches to re-defining the role and meaning of the library, writes Alessandro Ludovico.

Finally, a third major focus of the Oslo meeting, and of this focal point is the representation of gender in the public sphere. The figures speak for themselves: there are roughly twice as many male as female editors-in-chief in the Eurozine network. We have asked selected partner journals to respond to a European survey on gender. Somewhat surprisingly, the participating editors showed little support for quotas for women in cultural journals – a measure examined in more depth by Lena Brandauer.

Read the conference report of the 25th European meeting of cultural journals held in Norway. 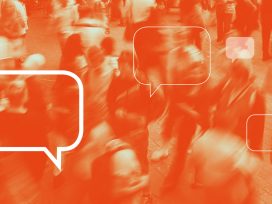 In a text based on her presentation at Eurozine’s Oslo conference on the making of the public sphere, Pelin Tan explains how artist-run platforms are generating unique forms of solidarity, translocal networks and various types of transversal knowledge and alternative pedagogies. In so doing, Tan makes the case for a language that remains faithful to the project of rebuilding a collective consciousness.

The changing nature of environmental expertise

For the time being, it seems that nothing on Earth is capable of reducing the release of carbon emissions into the atmosphere. But if the global consensus among scientists as to the causes of climate change is not enough to effect change, what is?

From Attac to Occupy Wall Street

Creating political movements in the age of globalization

It’s never been more difficult to form new political movements that do justice to the connection between the local and the global, as well as the abstract and the concrete. Olav Fumarola Unsgaard on the rise and fall of the social forum movements of the past two decades.

The power of minus

Using guerrilla tactics in a state close to collapse

The periodical translation of news into words and the associated analysis that constitutes the print medium, writes Victor Tsilonis, is no longer enough. It cannot attract a wider audience. The answer: humorous, issue-specific poster, social media and video campaigns.

Interactions of the technical and the social

Digital formations of the powerful and the powerless

Saskia Sassen compares the impact of two kinds of socio-technical formations on the public sphere: electronic capitalist elites concentrated in global cities and globally networked, local social activist movements. Both have the power to transform existing political and economic systems.

Living in the matrix

In Belarus, the digital dissident generation born in 2006 came of age during the political and economic crisis of 2011, writes Iryna Vidanava. However, bridging the gap between virtual and real-life activism remains one of the most serious challenges facing Belarus’ democratic movement.

As the use of the Internet in the post-Soviet space continues to evolve, Natalya Ryabinska shows how tools of control, surveillance and propaganda are more than up to the task of hindering online sources that promote democratization. Once again, the fate of civil society hangs in the balance.

The revolution begins with Rosia Montana

The prospect of Romania’s parliament passing new legislation, allowing the expropriation of citizens’ homes to make way for Europe’s largest gold mine, has prompted some of the country’s most significant protests since the fall of communism. Claudia Ciobanu reports.

Traditional libraries are increasingly putting their holdings online, if not in competition with Google Books then in partnership, in order to keep pace with the mass digitization of content. Yet it isn’t only the big institutional actors that are driving this process forward: small-scale, independent initiatives based on open source principles offer interesting approaches to re-defining the role and meaning of the library, writes Alessandro Ludovico.

Political change and the performing arts

The case of central and eastern Europe

When politics and the arts collide, “coded speech” invariably becomes the norm on stage and in books, newspapers and public discourse. Géza Kovács tries to unravel why it is that the arts in central and eastern Europe keep getting thrown into the whirlwind of historic change.

As democratic imaginaries linked to new protest movements circulate globally, Nilüfer Göle reassesses relations between the public sphere and democracy; and shows how the Gezi Park movement, among others, has used public space as a site for the rehearsal of new forms of citizenship.

Human Rights: Past their sell-by date

If the concept of global human rights is to endure, a new and more political, transnational and adaptable movement must emerge, argues Stephen Hopgood. Only then might bottom-up democratic norms replace top-down authoritative rules.

As protests continue in Slovenia, Robert Titan Felix sees the need for a programme to protect the welfare state and citizens themselves from the greed of capital, which pushes the less successful to the margins of existence.

The hour of the expert

What constitutes economic expertise? Looking at how European politics has answered this question over the last four centuries, Werner Plumpe argues that, at any given time, economic expertise is judged according to its coincidence with the conjuncture.