The Legacy of Division: East and West after 1989

The Legacy of Division is Eurozine’s new anthology published in English and in Slovenian. Watch the book launch discussion with authors Simona Škrabec, Jannis Panagiotidis, Jill Massino and Bogdan Iacob, moderated by Adam Reichardt, editor of our partner journal New Eastern Europe. Watch in Eurozine or on Facebook.

Can one speak of a new East–West split? How has our understanding of the two halves of Europe, shaped by the Iron Curtain, changed in the past three decades? Some seem to forever carry the East with them, while others substitute the colloquial ‘end of history’ with shallow concepts for political gain. Easterners are tired of the perpetual post-Communist stigma, while Westerners suggest the promised land wasn’t quite so promising in the first place.

The book was supported by the Bundeszentrale für Politische Bildung and published by CEU Press in September 2020. Order the book here.

Widening the Context: A Eurozine Anthology 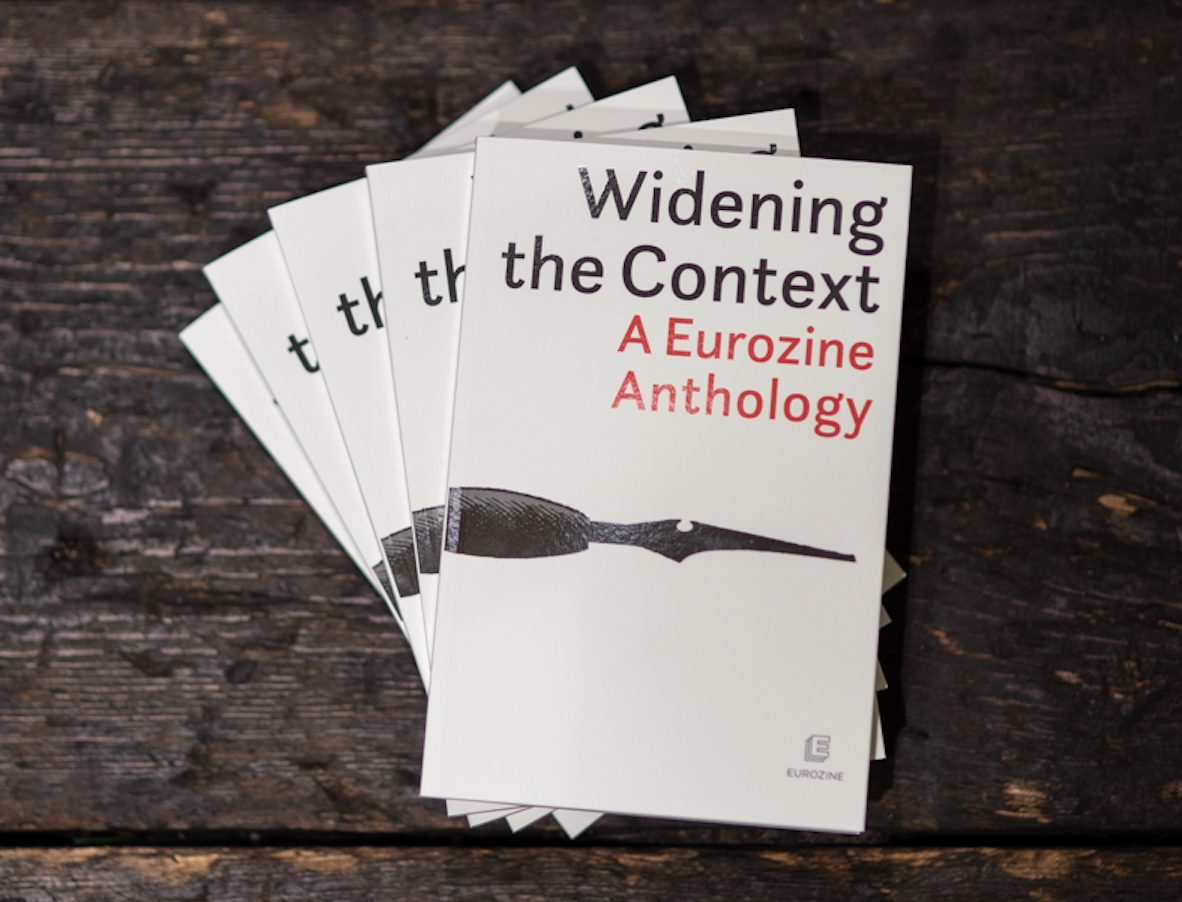 What started in 1983 as an informal meeting of European editors became the basis for Eurozine, founded in 1998 as an online cultural journal and editorial network. To celebrate this double anniversary, Eurozine has published a print anthology spanning the project chronologically, thematically, generically and geographically. The book provides an insight into two decades of engagement with issues at the heart of the European debate. From the new nationalisms to Euro-Islam, from Paris and Prague to free speech and the role of intellectuals, from algorithms to post-truth politics and the masculinities of Vladimir Putin and Donald Trump – a collection of texts that widen the context.

With an introduction by Eurozine co-founders Carl Henrik Fredriksson and Klaus Nellen.

‘Europe is being torn apart. However, one of the positive effects of the crisis of the EU is that Europeans have started to become interested in one other. The financial crisis made the ordinary German an expert on the Greek and Italian economies; the refugee crisis turned Czechs and Poles into experts on the German asylum system. In short, the common European public sphere is now more a reality than ever before. If there is a project that embodies this idea it is Eurozine. What could be more European than a small journal of big ideas? If Eurozine did not exist, it would have to be invented. Thank God and its visionary founders, it is already with us.’ – Ivan Krastev, author of After Europe

The book is also available via Amazon, see link here.

Europe talks to Europe. A polylogue on culture and politics

Eurozine im:print is a series of print collections, compiling Eurozine articles and essays around topics of special interest and of relevance in a transnational debate.

The second issue publishes a series of public debates Eurozine organized in cities across central and eastern Europe, including Budapest, Bratislava, Brno, Bucharest, Lviv, Sofia, Warsaw and Vienna from Autumn 2009 to Spring 2011. The texts based on the discussions were first published on the Eurozine website and republished in translation by journals in the network. In this volume they have been supplemented by further articles and interviews.

All these discussions illustrate the importance of a communal space transcending national boundaries – also the borders between eastern and western Europe. A space where arguments and analyses based on diverging historical experiences can be formulated. While Marxism has strong critical potential in western Europe, many eastern European intellectuals regard it as a totalitarian relic. Both perspectives are part of the European intellectual legacy. Nationalism in Belgium might be very different from nationalism in Ukraine, but if we want to understand the current European crisis and how to overcome it, we need to take both into account.

The debate series Europe talks to Europe was a cooperation between Eurozine and ERSTE Foundation.

Literary criticism in the more narrow (European) sense of the word – meaning texts discussing and criticizing recently published books – is today a very national affair. Almost all books reviewed in daily newspapers, weeklies, and journals are published in the country where the reviewing medium appears. Single reviews or general overviews of books written in other parts of the world and not (yet) translated – be they poetry, short stories, or novels – are extremely rare. Eurozine’s series of essays Literary Perspectives aims to ‘re-transnationalize’ literary criticism by providing overviews of diverse literary landscapes written by distinguished critics based in the respective countries.