The transnationalization of politics does indeed pose a complex challenge to democratic institutions that were designed to cater to the needs of nation-states, and the critique of the “democratic deficit” of the European Union grows stronger by the day. However, the crisis of democracy is not confined to the EU. Regimes claiming to be democratic come in for vigorous criticism almost everywhere and pundits and analysts claim that we already live in a “post-democratic age”: while modern democracies are keeping up the facade of formal democratic principles, politics and government are increasingly slipping back into the control of privileged elites in a manner characteristic of pre-democratic times. This development has provided a breeding ground for populist movements whose antipathy towards political elites quickly turns into the rejection of the parliamentary system per se. Mistrust of the state and its institutions ranges from “political apathy” to violence.

Under the double-edged heading “The ends of democracy”, we have collected articles that make the problems of democracy so tangible that one actually starts to wonder if it has a future at all, but also those that return to the very basis of the principle of democracy and make clear its purpose – its ends.

Thus, Turkish sociologist Nilüfer Göle remains optimistic about the “circulation of social imaginaries” that Turkish protests surrounding Gezi Park in Istanbul triggered, and the new forms of citizenship rehearsed there. Her article, entitled “Public space democracy”, sets the tone for discussions of experimental approaches to new forms of participation as formal modes of representation and participation come under increasing strain.

For all the creativity of recent alternative approaches, mistrust of the democratic state and its institutions might never have been higher than in the wake of the NSA scandal, the latest in a series of episodes in which the technological culture of constant feedback (see Ivaylo Ditchev’s “Democracy live”) once confined to politics has expanded to include the public at large.

This is a theme that Ivan Krastev picks up on in an article written prior to the NSA scandal, entitled “The transparency delusion”. The citizen armed with a smartphone, writes Krastev, has the power to disseminate evidence of abuses of power, captured on the phone’s camera, in the name of transparency. However: “Contrary to its stated ambition to restore trust in democratic institutions, the transparency movement may accelerate the process of transforming democratic politics into the management of mistrust. The politics of transparency is not an alternative to a democracy without choices; it is its justification and blurs the distinction between democracy and the new generation of market-friendly authoritarian regimes.”

Nowhere is the question of democracy more pressing than in connection with climate change. Can democracy enact a radical change towards a sustainable order, or has it meanwhile assumed a form that above all serves to stabilize an unsustainable status quo? If so, what is then the future of democracy? Claus Leggewie and Harald Welzer argue for more participation, a position to which Ingolfur Blühdorn provides a sceptical response.

In the end, it seems as if the future of democracy hinges on the transnationalization of politics. That means a cultural, ideological, strategic and ultimately institutional redefinition of the very meaning of democracy. The result of such renegotiation of the basic principles of modern societies is hard to predict. However, it is not a wild guess that the change will be radical. Perhaps a new democratic order will even entail some form of Transnational citizenship? 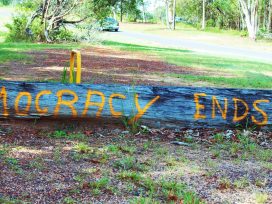 The global politics of protest

The new wave of revolutionary politics, from the Arab Spring to the Turkish Summer, is an insurgence against representative democracy that offer no alternatives, writes Ivan Krastev in a new book. Is protest really a better instrument than elections for keeping elites accountable?

A conversation with Thomas Piketty

At the heart of every great democratic revolution there was a fiscal revolution, argues Thomas Piketty. And the same will be true of the future. Only a global register of financial assets and a progressive global tax on capital can keep global wealth concentration under control.

Between hegemony and distrust

Representative democracy in the Internet era

Iceland’s crowd-sourced constitution and the impact of Beppe Grillo’s blog on Italian politics reveal how “Internet democracy” has opened a new phase of democratic innovation. The relationship between citizens and politicians may never be the same again.

Democratic transition in post-Communist east-central Europe was primarily facilitated by external developments including the fall of the Soviet Union and European integration. Today, in the absence of any such favourable exogenous factors, it remains to be seen whether democratic institutions have grown strong enough in the region to withstand undemocratic and illiberal currents induced by the economic crisis.

The unpredictability of politics in the age of social media

Social media extend the range of participatory acts open to citizens. The result can be unpredictable leaderless mobilizations involving massive numbers of small donations of time and effort. And although the vast majority fail absolutely, a few succeed dramatically.

Post-democracy in the age of global financial markets

Beyond do-it-yourself politics, short-lived mass protests in the metropolises and a further swelling of the ranks of the popular right, the democratization of democracy is still possible, contends Claus Offe. But not if political life remains locked within the “prison of the market”.

Living in the matrix

In Belarus, the digital dissident generation born in 2006 came of age during the political and economic crisis of 2011, writes Iryna Vidanava. However, bridging the gap between virtual and real-life activism remains one of the most serious challenges facing Belarus’ democratic movement.

Is China more democratic than Russia?

Power rotation, listening to the people, tolerance of dissent, recruitment of elites and experimentation: the truth is that, in all of these respects, China is more democratic than Russia. And China’s decision making is undoubtedly superior too, argues Ivan Krastev.

There's more than one road to the promised land

Russia might be more democratic but China is better governed

Comparing China and Russia in terms of their conformity to western liberal-democratic standards shows the inadequacy of such a general yardstick, writes Rein Müllerson in his response to Ivan Krastev. What really matters is rule of law and good governance.

As democratic imaginaries linked to new protest movements circulate globally, Nilüfer Göle reassesses relations between the public sphere and democracy; and shows how the Gezi Park movement, among others, has used public space as a site for the rehearsal of new forms of citizenship.

Democracy protection in the EU revisited

What, if anything, is wrong with a Copenhagen Commission?

Jan-Werner Müller deals with critical issues raised by his proposals for a Copenhagen Commission: an independent institution specifically tasked with alerting Europe to threats to democracy, the liberal rule of law and individual rights such as those currently seen in Hungary.

Cracks in the Kremlin matrix

Peter Pomerantsev enters the matrix of managed democracy that underpins postmodern dictatorship in Russia. A society of pure spectacle, with fake parties, fake opposition, fake scandals and fake action: this is the political technologists’ project, in which (almost) everything becomes PR.

On the side of democracy

Brussels is not empowered to be a policeman for liberal democracy in Europe. Not yet. But should it be? Following recent developments in Hungary and Romania, Jan-Werner Müller argues that it is legitimate for Brussels to interfere in individual member states as a democracy watchdog.