The fear of being torn apart

Hungary, Estonia and Belgium before the EP elections

The products of Hungary’s post-truth laboratory are being received with increasing scepticism, while in Estonia the European elections will be a test of nerve following March’s general election. In Belgium, at least, things are just about holding together.

Fidesz underlined the limits of euroscepticism in Hungary with an EP campaign that earned the party suspension from the European People’s Party. However, central government’s tight control over the media has thus far precluded realistic representation of the Hungarian people’s pro-European views.

In contrast to the top-down eurosceptism seen in the workshop of illiberalism, this is the first EP election in which Estonia is experiencing the emergence of a major eurosceptic player – and this in the midst of ongoing coalition negotiations following March’s general election.

In Belgium, the gap between French-speaking and Dutch-speaking Belgians seems to be growing, as the French regions focus on the European Union’s ability to confront socio-economic issues and the Flemish regions on its capacity to reinforce national security. 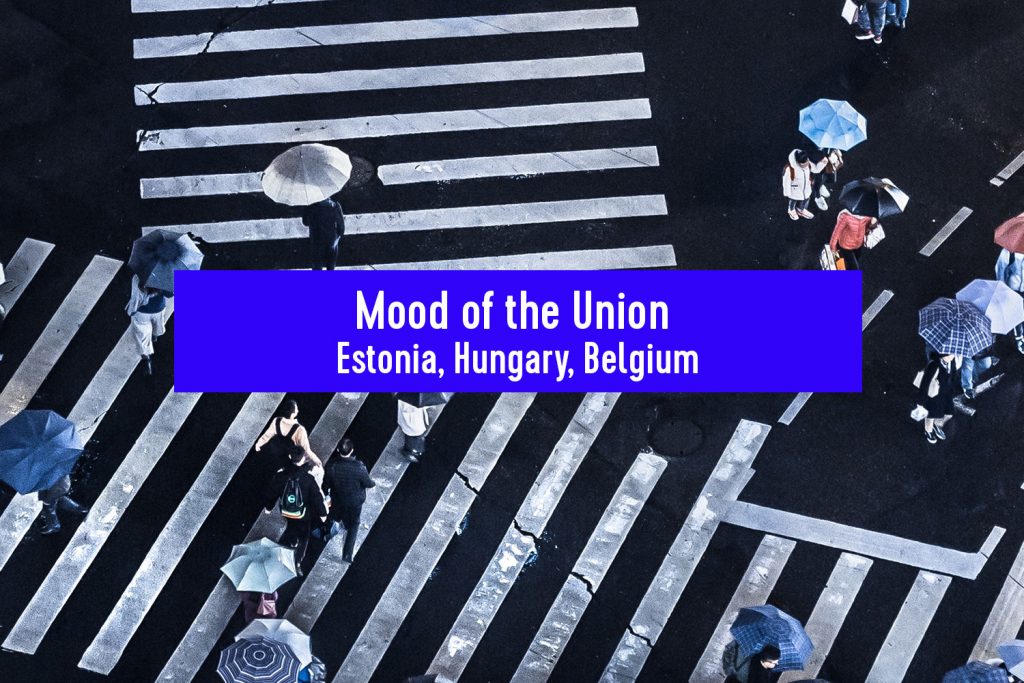 Photo by Yiran Ding on Unsplash

Hungary: Replacing the pro-European views of the people?

Mainstream political parties often struggle to mobilize their supporters in the European elections. But the Fidesz government has outdone itself with this year’s campaign, targeting European Commission President Jean-Claude Juncker and US investor George Soros, and ‘informing’ the people of the malevolent plans of Brussels. Not only is this likely to mobilize Hungarian voters. It has of course already mobilized European political elites – against Fidesz itself. The party’s long-term efforts to heighten tensions between ‘European Elites’ and ‘the Hungarian People’ do draw on some genuine conflicts. But there seems to have been some miscalculation about the possible consequences of the campaign, namely, Fidesz’s suspension from the European People’s Party.

In contrast to many western European countries, where politicians try to ride the waves of euroscepticism already present in the electorate, Prime Minister Viktor Orbán has tried to make waves in still waters. While his rhetoric suggests the polar opposite, Hungarians’ trust in the EU is higher than the average for member states. And whereas eurosceptic voters in the West want to oust pro-EU elites, the anti-EU elite in Hungary wants to replace the pro-European views of the people.

In the post-truth laboratory

The means: aggressive campaigns run by a huge, increasingly centralized machinery of fake news and conspiracy theories funded by central government, making Hungary the sole ‘regime of post-truth’ among member states. Here, the only news about the EU is about incoming ‘swarms’ of migrants and George Soros.

Admittedly, this has already had a negative impact on attitudes towards the EU. Orbán wants to destroy the EU’s image for three reasons. First, he has a vested interest in stopping European integration. For the further this process advances, the more difficult it becomes to build and sustain a hybrid regime based on nepotistic corruption. Second, he sees the EU as a political rival that is actually rather popular in Hungary. Third, Orbán wants to transform the EU from within. Luckily for the EU, this will be increasingly difficult to do from the political periphery – which is precisely where he is heading.

Estonia: A test of nerve after the general election

Estonia traditionally has six seats in the European Parliament but will gain one more if Brexit goes ahead. Until now, the European elections have been rather anaemic affairs only livened up by independent wild card candidates attracting protest votes. This time around, they come less than three months after the parliamentary elections on 3 March. Right now however, nobody seems to be thinking ahead to 26 May as the suspense around ongoing coalition negotiations holds most attention.

Contrary to forecasts, the senior partner in the previous coalition, the Centre Party, came second in the national elections after the neoliberal Reform Party. The far-right EKRE made the biggest gains, more than doubling their seats and taking third place, while the governing Social Democrats and conservative Pro Patria both suffered losses. In previous years, all major parties have supported EU membership and European issues have received little attention. The European elections have mostly been a lottery for launching half a dozen senior politicians into lucrative jobs.

Can the centre hold?

This time, things may be different. First of all, there is now a major eurosceptic player on the scene. EKRE ran on a platform of pushing back against Brussels, subordinating the judiciary, reversing the legalization of same-sex partnerships, fighting non-existent immigration and withdrawing government support for Vikerkaar. While the Centre Party has a eurosceptic past (indeed, it campaigned against Estonia’s accession to the EU), it has changed face over time and caucuses together with Estonia’s Reform Party in the Alliance of Liberals and Democrats (ALDE).

Second, the European elections will likely be seen as a major test for the public’s support of whichever coalition emerges from the ongoing negotiations. If the Reform Party fails to form a coalition, or EKRE is admitted to the government, voters may punish the liberal parties, while support for EKRE may grow.

On 26 May Belgians will vote in European, federal and local elections. This threefold exercise in democracy obscures what is at stake at the European level. However, there is a general consensus concerning the widening gap between French-speaking and Dutch-speaking Belgians, which has a direct influence on perceptions of the European project. In short, the main issue in the French regions is the ability of the EU to confront socio-economic issues: how to avoid social dumping? How to fight tax evasion? The Flemish regions are primarily concerned about the capacity of the EU to secure borders, avoid mass immigration and fight terrorism. The dynamics of pre-election debates in the media vary accordingly.

Paradoxically, as critics of the EU grow louder and eurosceptic parties become more prominent across the continent, the EU receives more support from those citizens who fear it being torn apart, of which there are a considerable number in Belgium. This fuels a strong pro-European sentiment among political parties, even those with a eurosceptic history.

The parties’ lead candidates carry considerable prestige in general and are already well known to activists and voters, not least ALDE leader Guy Verhofstadt (Open VLD). Therefore, even if the European elections are less discussed than the others on talk shows or in the newspapers, the candidates themselves do attract a relatively high level of attention. This has sparked a reasonably vivid debate on the European project. Meanwhile, according to the 2018 Eurobarometer, 75 per cent of Belgians believe that EU membership has been beneficial to their country – the highest proportion in 35 years.

Clearly, rightwing parties play a major role in the Flemish political sphere. According to the survey of the European political landscape that the European Parliament published in February, the New Flemish Alliance (N-VA), a nationalist separatist party, is expected to preserve their lead with four seats. The Christian Democrats (CD&V) are predicted to win two seats and the liberal Open VLD party to lose one of its two seats. The extreme-right Vlaams Belang and the Socialist Party (SP.A) would keep one seat a piece.

The situation is quite different in the French-speaking part of the country, where two political parties of the Left, the Socialist Party (PS) and the Greens (Ecolo), are expected to win two seats each. The Liberal Party of outgoing Prime Minister Charles Michel would also retain its two seats and the Christian-democrats (CDH, center-right) would win one seat.

Cash for visas, Fridays for Future, and the prospect of a no-deal Brexit

However, since these projections were published, a couple of disruptors have surfaced that could upset the current balance of power. First, the N-VA was hit by a scandal involving one of their leading political figures, Theo Francken, the former secretary of state for asylum and migration. His staff members are alleged to have been implicated in the granting of visas outside official channels, despite the fight against ‘illegal migration’ and human trafficking being one of the party’s major focal points.

Meanwhile, civil society is mobilizing on the climate front, with students from all over the country demonstrating each week and thousands of people protesting in Brussels alone. This has clearly helped to shift the focus of election campaigns, with the Greens being most likely to benefit on both sides of the linguistic divide. According to some commentators, Ecolo could even come first among the French-speaking parties at the European level, with three seats. The party’s lead candidate is Philippe Lamberts, a finance specialist who is strong on climate issues. Finally, fears of a no-deal Brexit have to some extent galvanized pro-European tendencies, with the lead candidate for the N-VA being outgoing Flemish Minister President Geert Bourgeois, one of the party’s more pro-European politicians.

Up next in the series: Austria, Bulgaria, Croatia.