European responses to the far right

Croatia, Cyprus and Slovakia after the EP election

A mixed field of populists emerge in Croatia amid a loss of confidence in the status quo; Cyprus takes stock after a campaign defined by nationalism; and in Slovakia far-right advances underline the need for innovative politics.

The liberal conservatives who head Croatia’s coalition government saw their share of the vote halved in May, as populists from across the political spectrum offered various alternatives. Some of these hail from the right or far right, others from the centre left or the country’s anti-eviction movement.

The ruling liberal conservatives in Cyprus took a hit at the polls, after departing from their traditionally pro-EU stance and moderate approach to the country’s division. That the main opposition party fielded a Turkish Cypriot candidate did not make matters any simpler, although it did produce an interesting outcome.

The far right in Slovakia has secured an advance in the polls that would have been unthinkable five years ago. Yet coalitions of new parties – including Progressive Slovakia, the party of new president Zuzana Čaputová – are responding well to the fear-mongering that characterizes the latest tide of extremism. 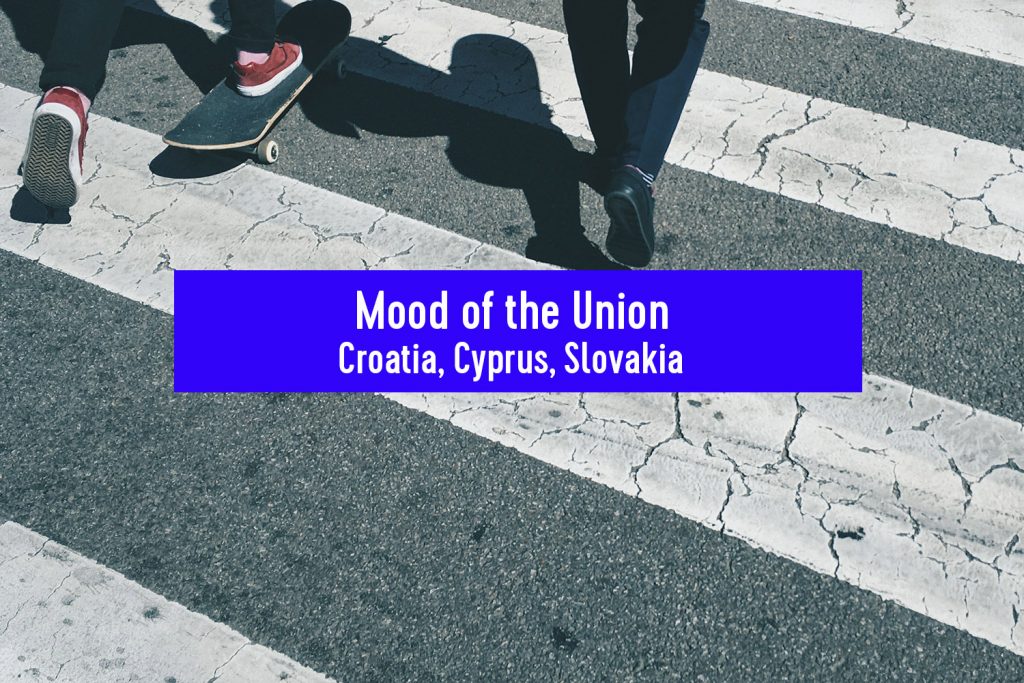 Photo by Max Tarkhov on Unsplash

Croatia: Turning to the right for alternatives

The EP election results reflect a loss of confidence in the status quo in Croatia, with voters seeking alternatives among a mixed field of populists.

After almost three years as lead coalition partner in the current government, the liberal conservative Croatian Democratic Union (HDZ) is gradually losing support. The party received 22.72 per cent of the vote in May, only slightly more than half of the share it won in the 2014 EP election. The likely cause is dissatisfaction among its rightwing supporters with what they perceive as signs that the party is taking a more centrist position. Its number of seats in the European Parliament fell from six to four. Whether this dissatisfaction will also be reflected in the Croatian parliamentary elections due to take place before the end of 2020 remains to be seen.

The Social Democrats (SDP) continue to provide the most appealing centrist option, retaining their four seats with 18.71 percent of the vote – a strong result given the party’s internal struggles since losing power and forming the opposition in 2015. However, the greatest surprise came with independent conservative populist candidate Mislav Kolakušić winning 7.89 percent, more than enough to make the cut as an MEP. Far-right politician Ruža Tomašić of the Croatian Souverainists, who formed a coalition with the national conservatives HRAST, retained her seat.

Of the two remaining mandates, one went to the populist party Human Shield (Živi zid), which grew out of the country’s anti-eviction movement, though turbulence within the organization means it is not clear which of its candidates will take up the party’s seat. The other mandate was secured by the Amsterdam Coalition, a progressive centre-left option.

Amid a turnout up 4.62 to 29.86 percent, two-thirds of voters opted for right and far-right options. Meanwhile, parties of the Left are in disarray, with truly progressive options such as the coalition of Možemo, New Left and Ora-H, or the Workers’ Front and SRP, receiving a little over two percent of the vote between them.

Cyprus’s ruling liberal-conservative Democratic Rally (DISY) suffered a blow in the European elections in May. Having won 37.75 percent in 2014, its share of the vote fell to 29.02 percent. This may be a result of DISY’s ideological shift towards nationalist rhetoric and away from its traditional pro-EU and moderate approach to the long-standing division of Cyprus.

The nationalist shift coincided with the hard-line position taken by president Nicos Anastasiades on fundamental aspects of a compromise concerning the division of Cyprus proposed under the auspices of the United Nations. This has resulted in complete deadlock for two years and in the escalation of tensions and claims made by Turkey relating to the exploration of natural gas resources on the continental shelf surrounding the island.

Just one month before the ballot, Anastasiades and DISY entered into a fierce confrontation with the Progressive Party of Working People (AKEL). This was sparked by the latter fielding a Turkish Cypriot candidate, the academic Niyazi Kizilyurek.

Despite facing a concerted campaign against him, Kizilyurek successfully secured his place as an MEP. He was able to draw on broad support from among pro-peace sections of Greek-Cypriot society as well as from Turkish Cypriots – numbering around 4,500 according to exit polls – many of whom crossed from the north to exercise their voting rights in the European elections for the first time.

This development is of great importance for the political scene in Cyprus and the strict separation of voting rights between Greek and Turkish citizens since the establishment of the Republic in 1960. DISY lost a section of its moderate supporters, who mostly chose to abstain or to give their support to Kizilyurek.

The election results did not ultimately change the share of seats in the European Parliament among the parties. DISY (EPP) and AKEL (GUE-NGL) retain two seats each, while the nationalist centrist Democratic Party and the Movement for Social Democracy EDEK (both S&D) retain one seat a piece.

Finally the neo-Nazi ultranationalist party ELAM, the Cyprus branch of Greece’s Golden Down, received 8.25 percent of the vote. In absolute numbers ELAM has seen a rapid increase of influence in Greek-Cypriot society, where it may have had as few as 500 supporters in 2009. The figure for 2019 is estimated to be around 23,500. Younger and more marginalized voters in particular tend to find the party’s patriotic and anti-establishment neo-Nazi slogans appealing in a Greek-Cypriot society that is confused about its political future and relations with the northern part of the island. However, the party’s share of the vote was not sufficient for it to win a seat in the European Parliament.

Slovakia: How to discuss the far right without empowering it

Fifteen years ago, Marián Kotleba marched the streets wearing a uniform of the Hlinka Guard, the militia of the Slovak People’s Party under the first Slovak Republic, a client state of Nazi Germany. Kotleba’s political movement was Slovenská pospolitosť (Slovak Togetherness). The Slovak Supreme Court dissolved the extremist organization after it was registered as a political party in 2005. At the time the party polled below 1 percent.

It was not only the uniforms that openly referenced and glorified the fascist era. However, the actual political potential of such open extremism was in any case very low at a time when Slovakia was still recovering from the semi-autocratic government of Vladimír Mečiar and the Slovak population was eager to celebrate joining the European Union. Marián Kotleba learned his lesson. Having grasped that his political activism could not be openly fascist, he assumed the more conventional role of an ultra-nationalist and self-stated protector of traditional Christian values, with undertones of Christian fascism.

In 2010, Kotleba launched ‘Kotleba – People’s Party Our Slovakia’. It gained less than 1.5 percent of the vote in national parliamentary that year, but Kotleba was still not discouraged. He adjusted his political rhetoric once more and was elected governor of the Banská Bystrica region in 2013. His party finally entered the Slovak parliament with over 8 percent of the vote in 2016, despite the initial mockery it had received from political analysts.

Support for Kotleba is rising, with his party recently polling at over 11 percent and now occupying two seats in the European Parliament. The latest attempt to ban Kotleba’s party failed just before the EP elections. The Slovak Supreme Court ruled that it could not be legally dissolved for its anti-democratic stance, since the party’s political program provided no evidence of such. Kotleba assumed the role of an unjustly persecuted victim and can now wear the badge of democratic party leader.

Though members generally try to disguise their far-right ideology, some are still not careful enough, as the recent case of Stanislav Mizík illustrates. Mizík, who secured a seat in the Slovak parliament in 2016, was charged with anti-Semitism and encouraging violence against ethnic minorities in his Facebook posts. His name was only cleared after his defence lawyers argued that the politician’s inability to operate computers and electronic devices meant that he could not have written the posts himself. This is how such fascists-in-disguise are able to function in a democracy today.

Originally anti-EU, Kotleba announced during the EP election campaign that the party had changed direction and would now try to change the EU from within. Meanwhile, the eurosceptic Sme Rodina party (We Are Family) failed to secure a mandate under the more moderate rightwing populist Boris Kollár. Not even the party’s hosting of an official visit from Marine Le Penn and public endorsement from Matteo Salvini could help them get their candidate elected on a eurosceptic card.

Kotleba’s party ran the more aggressive campaign. Milan Uhrík, one of its successful candidates, shot some ridiculous fear-mongering videos in Brussels. In one scene he stands in the municipality of Molenbeek and declares it a ‘no-go zone’ for white people. As people of colour pass by oblivious to his presence, he says that he feels unsafe and that the EU intends to flood Europe with migrants and homosexuals.

During the campaign it became clear that an emphasis on real social and political solutions, dialogue among democratic forces and a willingness to create strong coalitions can and must be part of the answer as to how to respond to the fear-mongering of the far right. Victory in May’s EP election went to a coalition between the newly formed parties Progresívne Slovensko (Progressive Slovakia) and SPOLU (Together). Progresívne Slovensko, an openly liberal democratic party, scored its first political victory when Zuzana Čaputová secured the presidency in March. The coalition won just over 20 percent of the overall vote, sending four MEPs to Brussels. Its campaign was built on warning against the rising tide of extremism all over Europe and the success of Kotleba’s party in particular.

Whether such tactics prove sustainable is an open question, as they too need an ‘external enemy’ to mobilize voters. This is a debate that will continue into the next parliamentary elections in Slovakia, which are scheduled for spring 2020, when a third new party will run alongside Progressive Slovakia and SPOLU. Za Ľudí (For the People) was established last month by outgoing president Andrej Kiska. Whatever the outcome of the next elections, a new democratic politics should promote global cooperation on such pressing issues as climate change, technological disruption and extreme economic inequality. Only then will the latest wave of extremism be stopped and reversed – both in Slovakia and in the rest of Europe.