It is less than a year since Greece exited its third bailout programme, wherein the Syriza government agreed to even harsher conditions than those that the Greek people rejected in the 2015 Greek bailout referendum. The party may well be about to pay the price for betraying its own stated aim of ending austerity in Greece. Thus the results of the snap national election on 7 July, triggered by Syriza’s poor performance in the EP election, are eagerly awaited.

Somewhat fraught relations between Greece and European institutions are just one distraction among several in this particular member state when it comes to actually dealing with the core issues of European politics. Meanwhile, in Lithuania there is felt to be a distinct lack of constructive criticism of the way the EU works and of any robust vision concerning its future. Finally, an increasingly pro-European mood in Denmark has dealt the nationalist populist Danish People’s Party a severe blow. 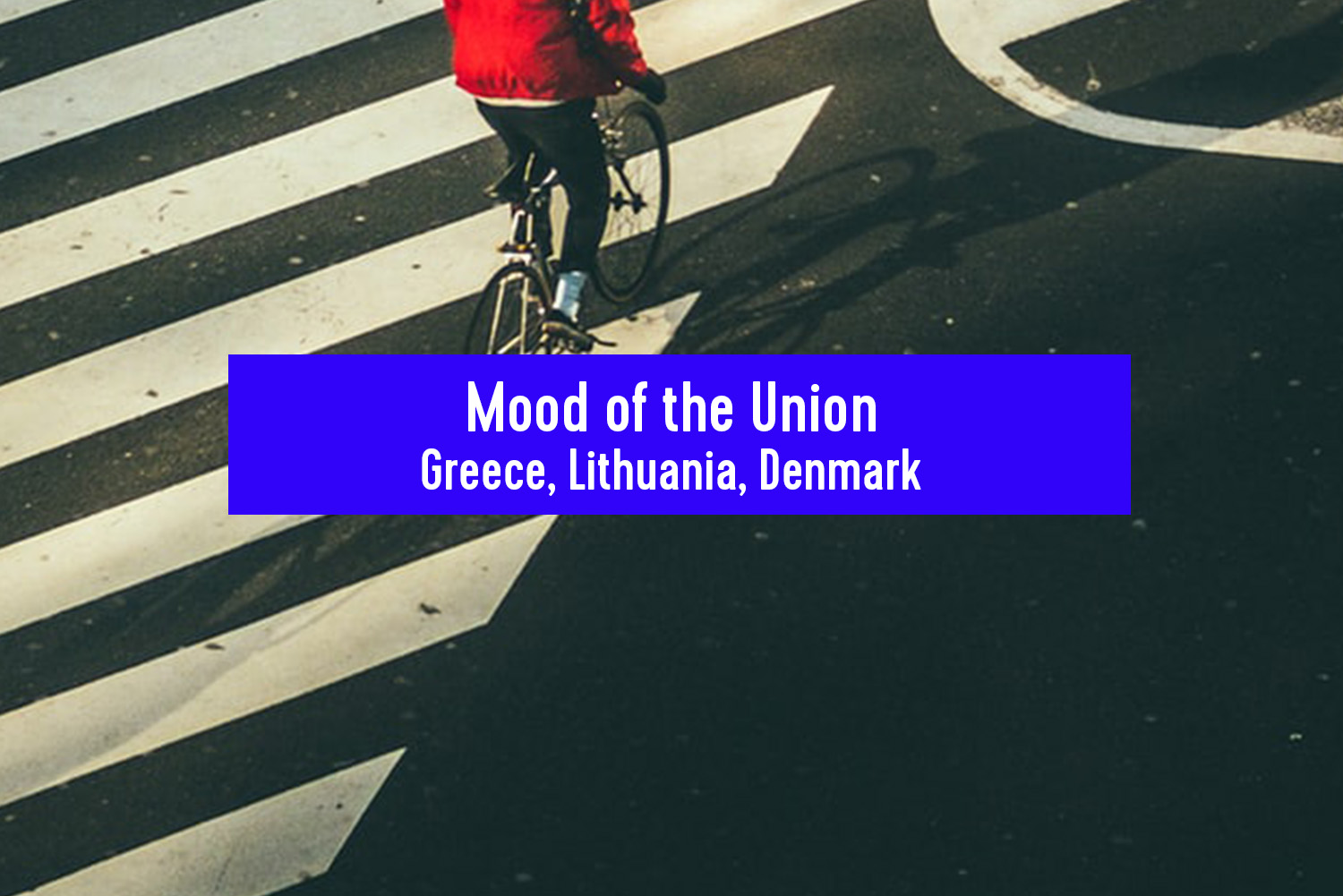 Photo by Arlindo Camacho on Unsplash.

Following the comprehensive defeat of Syriza in both the European election and concurrent local elections in Greece, and the triumph of the liberal-conservative New Democracy party, a snap national election is to be held on 7 July. The grounds for ultimately neglecting the key issues of European politics are various and sometimes alarmingly obscure.

There were at least three distractions that made people stop thinking about the European elections per se for a while and focus instead on what specifically characterized the Greek situation on 26 May.

DiEM25 could just as well be called the European Realistic Disobedience Front but is actually known in full as Democracy in Europe Movement 2025. Predictions for the new Pan-European political party ranged from 2.99 to 3.01 percent – depending on when you looked. But ultimately the party failed to win the 3 percent that a Greek political party requires to secure a seat in the European Parliament.

Thus Yanis Varoufakis, the former minister of economics who dominated the first year of the rule of ‘leftist’ party Syriza in Greece (2015), came quite close but not close enough to gaining a seat last May. Or rather his movement did, Varoufakis himself ran for election without success in Berlin and not Athens. So the whole discussion about DIEM25’s final result proved something of a double distraction from the true importance of the EP Elections in Greece.

Another new political party that ran in May is known as ‘Greek Solution’. Anything but pan-European, it was successfully led by Kyriakos Velopoulos, a journalist and the author of the three-volume (almost cult) ‘Greece Bleeds’, not to mention a former MP for the far-right LAOS party and former member of New Democracy. The rightwing party won a not inconsiderable 4.18 percent, enough to secure it a seat in the prestigious European Parliament.

However, it seems that many voters confused the name of Fragkos Fragkoulis – a well-known former general, former Chief of the Greek Army and former Minister for National Defence – with the 25-year old dentist Emmanouil Fragkoulis. He is said to have used his nickname (which is apparently ‘Fragkos’) on the voting slip, where he was therefore listed as ‘Fragkos Fragkoulis’. Initial unofficial estimates indicated that the infamous 25-year old dentist may have taken as many as 11,000 votes, just because of the recognition his alleged nickname commanded.

The general himself appeared to be furious at the attempt to use his name so that Greek voters might understandably receive the false impression that he was running to become an MEP. However, the general did not issue any injunction before the elections or file a suit afterwards. Thus the public debate wandered from the true purpose of the EP elections to a singular case of misleading labelling.

Notwithstanding the common and well-justified assumption that a seat in the European Parliament is more prestigious, luxurious and certainly better paid than a seat in the Greek Parliament, the eminent journalist and writer Semina Digeni took the quite unprecedented decision – shortly after being elected an MEP on behalf of the Greek Communist Party – of submitting her resignation in order to run as a candidate for the same party in the national election on 7 July.

Digeni’s unexpected decision constituted the third and final nail in the coffin of the EP election in Greece. It also came as a clear signal that for many good reasons the snap national election may well prove far more important than the recent European vote.

Lithuania: All slogans, promises and verbalism, no critique or vision

The European election was taken much more seriously than previously in Lithuania this year, even if local government elections in March and the presidential election in May were clearly the country’s absolute priorities.

It can certainly be concluded that, as a result, Lithuanian eurosceptics failed in their bid to significantly change the current course of the EU and realize their stated aim of altering its cultural and social identity. Beyond which, the political landscape remains largely unaltered. The Lithuanian conservatives (euro-optimists) won three seats, while two seats each went to the Lithuanian social democrats and the Lithuanian Farmers and Greens Union. The Labour and Liberal parties each have one a piece.

The country’s remaining two mandates went to so-called citizens’ committees, one of which is led by economist Aušra Maldeikienė (affiliated with the EPP), the other by self-appointed ‘minority’s representative’ Valdemar Tomaševski, a Lithuanian-Polish community figure with close ties to Russia (affiliated with the eurosceptic ECR).

In lieu of the will to restructure

This does not necessarily mean that things will proceed smoothly, far from it. The problem is that none of the self-professed pro-European parties in Lithuania has (or for that matter ever had) a concept or even a more or less clear vision as to how Europe’s future should be constructed in the face of abundant political and social problems.

Instead we have been offered slogans, promises and verbalism but no clear-cut critique. This only contributes further to the current chaos in which the EU finds itself. The winners of these elections can hardly be said to possess the kind of ideas or even the willpower required to restructure the EU.

The country saw the greatest turnout for an EP election ever this year, with 66 percent of the electorate having voted. This does not of course automatically enhance the European Union’s democratic legitimacy. However, the outcome does reflect an overwhelming rejection of a nationalist approach to problems that are impossible to solve exclusively from within national borders. Denmark voted green, liberal and social-democratic, which simultaneously dealt a severe blow to the eurosceptic nationalistic Right.

As with the national election that took place ten days later on 5 June, it was the question of climate change that came to the fore. The left-green party Socialistisk Folkeparti, with veteran climate change campaigner and MEP Margrethe Auken, doubled its representation after winning 13.2 percent of the vote and two seats. The Social Liberal Party, which takes the strongest pro-Europe stance in the country, enhanced their position by a comparable margin.

Perhaps most significantly, the Danish People’s Party lost three of their four seats, with their share of the vote being slashed from 26.6 percent in 2014 to 10.76 percent. After the election, former party leader and figurehead Pia Kjaersgaard blamed the party’s loss of support on ‘climate loonies’, making her and her party sound ungracious and out of touch.

The Social Democrats held their ground after drifting to the right without pursuing an explicitly eurosceptic line, while the Liberal Party advanced, probably by winning back a considerable number of votes from the nationalistic Right. The two traditional parties now have three seats each. Further evidence of a growing pro-European feeling in Denmark can be discerned in the leftwing People’s Movement against the EU losing all representation for the first time since 1979.

The Brexit mess has likely influenced the latest preferences among Danish voters, or at least clearly pointed to what lies beyond an unwillingness to cooperate internationally.