Netherlands, Austria and Malta after the European elections

The Labour Party’s surprising success in the Netherlands may merely have proven opinion polls wrong but the political earthquake experienced in Austria will clearly have lasting consequences. Both Austria and Malta happened to achieve gender equality among elected MEPs, prefacing a drive to achieve the same among appointments to top EU jobs.

The surprise success of the Labour Party and the middling performance of a far-right start-up in the Netherlands proved opinion polls to be significantly wide of the mark. Though the Greens decisively increased their share of the vote, the political centre ultimately held its ground fairly convincingly.

Nothing could have prepared the ground for the extraordinary scenes in Vienna just days before the vote. Austria’s coalition government collapsed after the far-right junior partner was rattled by the release of secretly shot footage showing its leader attempting to negotiate transactions in rather compromising circumstances. Chancellor Sebastian Kurz’s party stormed to success in the elections, only for Kurz himself to be ousted in a vote of no-confidence the following day.

Before Brigitte Bierlein was appointed interim chancellor, the first woman to hold the post in the country’s history, slight progress had already been made in both Austria and Malta as regards remedying gender imbalances in European politics: voters in both member states returned an equal number of female and male MEPs. These developments coincided with a recent statement by outgoing President of the European Council Donald Tusk, who said that gender balance is also of the utmost importance when it comes to appointments to the top EU jobs.1 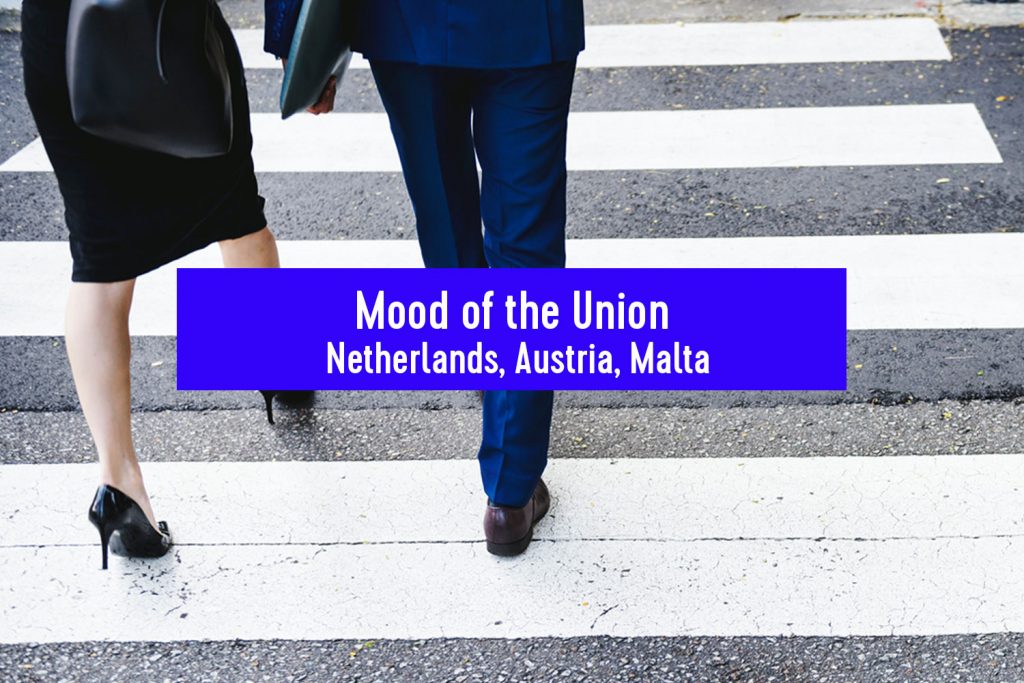 Before the elections, opinion polls indicated two parties to be neck-and-neck, vying for first place: the People’s Party for Freedom and Democracy (VVD), a rightwing liberal member of ALDE led by Prime Minister Mark Rutte, and the new far-right populist party Forum for Democracy (FvD) that suddenly came to prominence in provincial elections in 2016 and is now part of the eurosceptic ECR grouping. But it was the Labour Party (PvdA) that ended up victorious on behalf of the Socialists & Democrats bloc.

This more than made up for its performance in the 2014 EP election, when Labour played a role in coalition with Rutte’s VVD that largely lost the goodwill of leftwing voters. After national elections in 2017, Labour was free to critique Rutte’s third grand coalition from the outside. The real boost then came from S&D veteran lead candidate Frans Timmermans: it was not least the tantalizing prospect of a Dutchman potentially landing a top EU job that propelled Labour to the top of the poll with 18.9 percent and six seats.

As unexpected as the result was, its effect on domestic politics has been limited thus far. VVD has won three national elections in a row under Rutte. Despite never having won a European election, second place means that it remains the strongest party in the current coalition.

FvD, the upstart in the populist bloc, came third with 10.9 percent and three MEPs. Using a cautious anti-EU rhetoric that made no mention of Nexit, they struck a fine balance between EU-scepticism and fears of becoming mired in a Brexit-style process. Among the party’s leading politicians, Derk Jan Eppink had worked in cabinet secretary positions at the European Commission before being elected as an MEP in 2009, when he represented the Belgian LDD party (then known as Lijst Dedecker). Eppink certainly seemed competent during the campaign, allowing party leader Thierry Baudet to use his anti-Islam rhetoric freely in an attempt to woo the traditional populist vote. Denying the human causes of climate change is another of Baudet’s specialties.

The FvD campaign effectively wiped out Geert Wilder’s PVV, which had been aiming to take first place in national elections just two years ago but did not receive a single mandate this time round – unless Brexit finally happens and the re-distribution of seats leads to the PVV securing one MEP position.

The Dutch political system has very low barriers to entry because there are no first-pass-the-post mandates at any level. Neither are there any thresholds in regional elections or those for the lower and upper houses, or indeed for the European Parliament. Nonetheless, leftwing and rightwing populist blocs remain relatively stable. The Green-affiliated parties have increased their overall support.

Turnout increased by 5 percent on 2014 levels and was the highest since 1989. Yet with 41.8 percent, it is still significantly below the EU average. Although the Netherlands has one of the highest non-national populations among member states, it is likely that only a small number of EU nationals voted since the relevant registration process effectively ended before the election campaign began.

The appearance of the Dutch group ‘Vengaboys’ during a demonstration in front of the Austrian president’s office marked the climax of a political storm that brought sudden chaos to the political scene. Tens of thousands of demonstrators sang along, as the band performed ‘We’re going to Ibiza’ in reference to a video secretly recorded on the Spanish island two years ago. A few hours before the performance President Alexander van der Bellen had announced that, for the first time in Austrian history, a woman would lead a caretaker-government until early elections after the summer.

The video, shot in 2017 but published just nine days before the European vote, showed Heinz-Christian Strache, leader of the nationalist Freedom Party (FPÖ), in conversation with a lady he believed to be the niece of a Russian oligarch. Together with deputy Johann Gudenus he promised to support business deals in Austria in return for donations to his party. Within 24 hours of the video appearing in German media outlets both politicians stepped down and all FPÖ ministers resigned. The day after the elections, the Austrian parliament ousted chancellor Sebastian Kurz, another first in the history of the Republic.

European topics had not been high on the agenda during the election campaign even before the scandal broke. Kurz’s Austrian People’s Party (ÖVP) mooted the renegotiation of the Lisbon Treaty and a sharp reduction in EU red tape, a move criticized by most other parties as either anti-European or lacking political substance. Together with Matteo Salvini’s League and Marine Le Pen’s National Rally, the FPÖ had committed to trimming back the EU to a ‘Europe of nations’. The Greens focused on climate change whereas the Social Democrats were preoccupied with internal discussions.

Election night showed that the scandal had hurt the FPÖ, albeit less than most observers had expected. The big winner was the conservative ÖVP, gaining 34 percent of the vote. The Greens, who had failed to enter the Austrian parliament two years ago, managed to stage a comeback with over 14 percent, thus maintaining the stature it had acquired in the last European elections.

Quite where Austrian politics is heading to next remains uncertain. Kurz’s handling of the crisis has antagonized all other parties, which will make it difficult to form a new government. At the same time the strong showing of the Greens indicates that the importance of migration, the dominant topic in Austrian politics for almost a decade, has peaked. Several polls show climate change and environmental issues to be the priority for voters under 30.

Meanwhile European topics have almost disappeared from the political landscape but the election campaign during the coming months promises to get as hot as that night in Ibiza two years ago.

Labour Party leader Joseph Muscat banked on his personal popularity, telling the electorate that a vote for Labour was a vote for him. His rival, Nationalist Party leader Adrian Delia, stoked the embers of Catholic conservative Malta by referring to the European election as a ‘referendum on abortion‘.

There was little that was European about the campaign in Malta for the European Parliament elections. Instead, Muscat and Delia played a game of domestic smoke and mirrors with an electorate that is passionately pro-EU but increasingly disinterested in EU politics.

The campaign slogans typified this swerve towards nationalism with a small ‘n’. Labour ran with ‘Malta in our hearts’ while the Nationalist Party opted for ‘Together for our country’. These tactics also fueled rhetoric that verged on being xenophobic, as Muscat said he would rather see foreign workers than the Maltese doing manual jobs like collecting rubbish and Delia warned about the dangers posed by ‘clans’ of foreigners on the island.

In the end Muscat’s Labour Party swept to victory as predicted, capturing 54 per cent of the vote and leaving the centre-right, increasingly reactionary Nationalist Party more than 16 percentage points behind. Fringe parties made no impact on Malta’s political duopoly whatsoever. Even though levels of participation remain well over the European average, voter enthusiasm is flagging. 27.3 per cent stayed home and 3.6 per cent made their point by spoiling their ballot; both figures are national records.

Three of Malta’s six MEPs will be female, with Labour to send four MEPs to the European Parliament compared to the Nationalists’ two. Meanwhile, Muscat quietly lobbies Brussels for a seat at the EU’s highest tables.