It takes some dedication to get excited about the European elections. Voter turnout has declined consistently since 1979, a tendency not reversed by the accession of the Mediterranean countries in two waves in the 1980s, or even by the enlargement of the 2000s, even though eastern European members make up a huge proportion of the electorate.

Bringing together a set of nations that have been competing and fighting since before the ‘nation state’ even existed, including ones who fought two world wars against each other within a century, the project is still grandiose enough. But, when it comes to this federation, political memory doesn’t seem to cut it for the masses.

Populist critics from East and West now campaign for more national sovereignty, while others demand more centralized efforts against corruption and anti-democratic developments. Some claim ownership of Project Europe in the name of the ‘core countries’; others take offence at this in the name of the semi-peripheries.

And yet, despite all these controversies, there is a tacit understanding among journalists and analysts that Europe is a bore to the general public.

As a network of European journals, Eurozine is in an excellent position to address this paradox. In our new series, The mood of the Union, partner editors from across the continent, together with further journalists and analysts, will be reporting on attitudes towards the elections and what is at stake at the national level. The aim is to provide a more detailed glimpse than one would usually catch from the bird’s-eye view of national media.

The series is curated by Agnieszka Rosner and edited by contributing editor Ben Tendler. 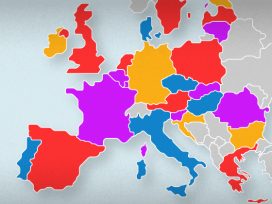 Mood of the Union is published by Eurozine and sponsored by the ERSTE Foundation and the National Endowment for Democracy.

In May, the UK will be holding the EU elections that were never meant to be. With the party system in Britain a state of flux, they will provide the first real picture since the start of the Brexit negotiations of the will of the electorate. In Denmark, the elections will be indicative of the mood of the nation before a significant general election, while in Malta they take place amidst a controversial debate about corruption and the rule of law.

Italy, Latvia and the Czech Republic before the EP elections

Overt euroscepticism pervades the political climate in Italy but is hardly anywhere to be found in Latvia. Meanwhile, low turnout in the Czech Republic may help facilitate a rightwing ‘Europe of nations’, despite the alternatives on the table.

Austria, Bulgaria and Croatia before the EP elections

The coming EP elections will serve as a stress test for the role that Croatia plays as the latest EU member state. It will also deliver a verdict on local elites’ efforts to restore their influence in Bulgaria and gauge popular sentiment regarding Austria’s upside-down political system.

The fear of being torn apart

Hungary, Estonia and Belgium before the EP elections

The products of Hungary’s post-truth laboratory are being received with increasing scepticism, while in Estonia the European elections will be a test of nerve following March’s general election. In Belgium, at least, things are just about holding together.

Greece, Portugal and Germany before the EP elections

The outcome of this year’s European elections is more likely to be determined by the state of nations’ finances than their media landscapes. However, the making and breaking of coalitions is something that money still, it seems, cannot buy.

Many great debates, some Manchurian candidates

Slovenia, Lithuania and France before the EP elections

Eurozine’s series of reports on national debates in Europe in the run-up to the EP elections continues. Views from Maribor, Vilnius and Paris suggest that, amidst the European ennui, the green shoots of grass roots democracy may be showing.

In the run up to the European Parliamentary elections in May, editors from the Eurozine network will be reporting on national debates from across the EU. First up in the series are views from Kraków, Nicosia and Dublin.