Austria, Bulgaria and Croatia before the EP elections

The coming EP elections will serve as a stress test for the role that Croatia plays as the latest EU member state. It will also deliver a verdict on local elites’ efforts to restore their influence in Bulgaria and gauge popular sentiment regarding Austria’s upside-down political system.

European issues are expected to remain peripheral in Austria this May, where the outcome of the EP election will mostly reflect the extent of public support for the government formed in 2017, when things began to take a sharp turn to the right.

In Bulgaria, the creeping restoration of local elites continues independently of European politics, which is determined by a separate set of tactical considerations. Here nationalist populism is a likely tool for state capture.

After joining the European Union in 2013, only a quarter of Croatia’s eligible voters participated in the 2014 European elections. Nonetheless, domestic and European considerations do overlap when it comes to issues such as immigration and labour. 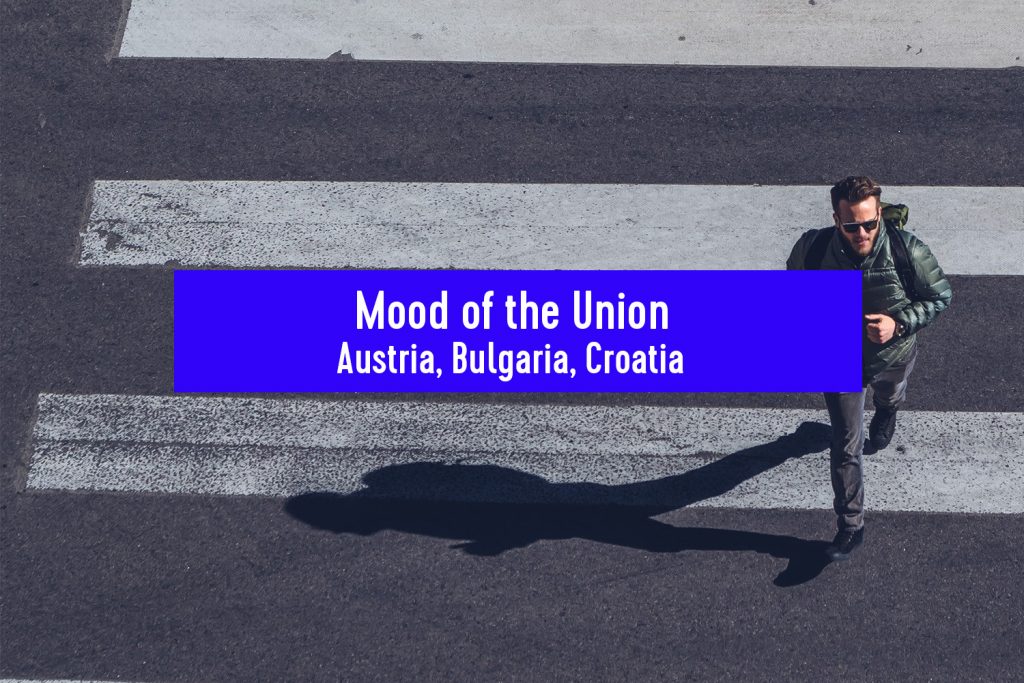 Photo by Hashim Rogers from Pexels

Austria: The European election without Europe

When Austrians go to the polls on 26 May, European topics will not be the primary factor determining how they cast their vote. Instead, the European elections will be the first test of whether the electorate support the government formed after the country’s 2017 parliamentary elections, which turned the political system in Austria upside down. EU policies have not been an important topic thus far, and this is unlikely to change in the coming weeks.

In May 2017, Sebastian Kurz became leader of the conservative Austrian People’s Party (ÖVP), then the junior partner in a coalition government with the Social Democrats. Focusing almost exclusively on preventing illegal migration, he rebranded the party and moved it further to the right. Voters liked what they saw and gave the so-called ‘new ÖVP’ a majority in parliament in October the same year, allowing Kurz to form a government with the far-right Freedom Party of Austria (FPÖ). The Green party failed to re-enter parliament, and the Social Democrats were further weakened by internal power-struggles.

Sharp turn to the right

The center-right coalition of ÖVP and FPÖ now has almost completely free rein to pursue their goals. For the coalition’s supporters, its policies are part of much-needed economic and political reform, for its critics they lead to dire social security cuts and a further tightening of the rules for migrants and asylum-seekers. The government took a sharp turn to the right in autumn 2018, when it became the first country in western Europe to refuse to sign the UN Compact for Safe, Orderly and Regular Migration, with other countries following suit thereafter.

The European elections will be an important test for Sebastian Kurz and his allies in the Freedom Party. They will show whether the Austrian electorate supports the way in which the government is reshaping the country. According to several polls, migration is still the most pressing issue for a majority of voters, with the ‘new ÖVP’ seeming to have the greatest credibility in this field. The lead candidate for the Social Democrats is disliked even by many of his fellow party members.

It will be most interesting to see whether the Green party reproduces its domestic decline in the European Parliament, or instead shows some sign of revival. Another development to watch out for will be the impact that recent revelations about links between the FPÖ and the far-right identitarian movement (Identitäre Bewegung) have on the party’s reputation. The movement came under public scrutiny after it was revealed to have received financial support from the perpetrator of the mosque shootings in Christchurch, New Zealand.

In short, the EP elections will not divulge much about Austrians’ views on Europe or the EU, but rather show whether or not they wish the government to maintain its current course.

Bulgaria: The smokescreen of euroscepticism

Political representation in the European Union is worse than indirect: it is broken. Not only do we not vote directly for European parties with clear political programmes; by voting for national parties, we have no guarantee that our vote will go to a parliamentary group with a clear ideological position. This is because the EPP, S&D, ECR, ALDE and other groups are essentially alliances of tactical interests rather than ideological formations.

After all, even distinctly eurosceptic and nationalist populist parties are members of the supposedly mainstream European alliances. And though Fidesz has now been suspended from the conservative European People’s Party group (EPP), the membership of the Bulgarian Socialist Party (BSP) in the Progressive Alliance of Socialists and Democrats (S&D) has yet to be questioned.

The nationalist populism of the supposedly leftwing BSP has not only failed to preclude an openly pro-Russian stance but has also led to the party explicitly rejecting the Istanbul Convention (to combat violence against women and domestic violence). Despite taking populism to new extremes, the BSP is apparently still not perceived to be populist at the European level.

Across the board, Europe’s eurosceptic populist parties may be expected to double the number of seats they hold in the European Parliament but are hardly likely to take more than one-third of all parliamentary seats. In Bulgaria things look even better at first glance: whereas in 2014 the explicitly nationalist populist parties won two seats, current polls show that if the United Patriots (part of Bulgaria’s coalition government since 2017) and Volya win any seats at all, they still cannot hope for more than three of the country’s 17 seats.

Thus on the face of it, Bulgaria seems like a pro-European country whose nationalist populists cannot threaten the future of the EU. Perhaps then the electoral surge of populist parties across Europe is about to stagnate, along with the most outspoken forms of euroscepticism. Particularly in the wake of the Brexit fiasco, these parties are increasingly in favour of a ‘Europe of nations’, a notion that is currently in vogue in Bulgaria too, whatever this political oxymoron might mean.

According to Timothy Garton Ash, we are witnessing an anti-globalist and anti-liberal counterrevolution. I would put it in milder terms: we are witnessing a creeping restoration of the local elites who were partially declassed by globalization. In eastern Europe, this means the former communist nomenclature, security services and the old cultural elites. For these people, nationalist populism and sovereignism are rarely an existential credo but rather an excellent smokescreen under which to counter even the slightest attempts at external control by European institutions.

Meanwhile, anti-liberalism and the lambasting of civil society (Oh, that Soros!) are the preferred means for blocking domestic resistance; and nationalist populism is a tool for state capture. Populist discourse in Bulgaria is vastly more present now than five years ago, even if outright populist parties have never won a majority. Meanwhile, press freedom has suffered, with Bulgaria’s worldwide ranking falling from 87th in 2013 to 111th in 2018 according to Reporters Without Borders. In 2017, the populist nationalist United Patriots became the junior coalition partner in the government as anti-democratic discourse continued to seep into common usage among all political parties, including the so-called mainstream ones.

Democracy in Bulgaria is deteriorating though not, for the time being, into true authoritarianism: an oligarchy in the style of Vladimir Putin’s or Viktor Orbán’s would be too pure a model for local Bulgarian elites to implement. This is also why the European elections will be presented as a victory of pro-European forces in Bulgaria, even as dealings with Russia on gas, nuclear power plants and other corrupt projects are in full bloom.

Bulgaria is now the amalgam of a pro-European ‘façade’ democracy and a latent eastern European oligarchy – a hybrid that is making less and less effort to clean up its image. But as long as there is no true European representation, this hybridity is not just possible, it is increasingly contagious.

Croatia: The shift from social democracy to the Right

The results of the 2014 European elections in Croatia were a bit of a surprise: candidates from the rightwing Croatian Democratic Union (HDZ) won 41.42% of the votes and six seats (five in the EPP; one in the ECR). The center-left Social Democratic Party (SDP) won 29.93% and four seats (two in S&D; two in ALDE). And finally, the green liberal ORaH took one seat with 9.42% (in the Greens/EFA group).

These results were surprising insofar as the SDP was, up until that moment, the strongest party in Croatia’s parliament, where it led the ruling national coalition from 2011 to 2015. However, having fallen behind the HDZ in the European elections, the SDP lost again to the HDZ in national elections in 2015 and in a re-run in 2016, despite the HDZ becoming embroiled in corruption allegations against the then deputy prime minister. The current crop of Croatian MEPs therefore faithfully reflects the domestic political situation.

On the need to reach out

Before assessing the level of interest in the European elections in Croatia, it should first be stressed that Croatia does not have an MEP in any of the European Parliament’s most important committees, such as the Committee on Budgets or those responsible for sectors that are central to the country’s economy, such as tourism. This may well explain the poor turnout in Croatia in 2014, at just 25.24 per cent of registered voters (950,980 citizens) – considerably lower than in recent Croatian national elections (61.77% in 2011, 61.5% in 2015, and 52.59% in 2016). It is safe to conclude that Croatian citizens’ lack of awareness of the role played by the European Parliament is conditioned by Croatia’s marginalized position in it.

The 2019 European elections are being held with national elections approaching before the end of 2020. Many important issues overlap at European and national levels, such as immigration and labour. It will be interesting to see whether growing domestic political discontent is mirrored in the results of the European elections, which would provide a taste of things to come. Or, alternatively, whether popular support consolidates around some new ‘third option’ that establishes itself ahead of national elections.

Up next in the series: Italy, Latvia, Czech Republic.

Playing to the audience

The televised suicide of Slobodan Praljak

Croatian war criminal Slobodan Praljak’s televised suicide at the ICTY has made him a hero in his home country and is seen as proof of his innocence. Unfortunately, Croatia’s revisionist attitude towards the recent past has precedents elsewhere in Europe, writes Slavenka Drakulić.

Russia’s war on Ukraine is clearly an attack on the whole of Europe, but domestic responses are still stuck with the narrative of patriarchal solidarity and the concern for consumer comfort on the home front. Philipp Ther argues for active solidarity, and with it, to prepare for the end of the convenience Europe has known: it may hurt, but without it, the long-term losses to freedom and welfare are likely to be higher.