Serbia is seeing mass demonstrations against the government, while the leadership tries to play the Kosovo card to get a better position in EU enlargement processes. Montenegro has been under undemocratic rule for a decade, but has recently earned diplomatic points by joining NATO. North Macedonia has made a grand gesture in resolving its name dispute with Greece, but this may prove more of a declamatory stunt than a meaningful development.

Norway, Iceland and Lichtenstein recently celebrated 25 years since deciding to join a different form of affiliation: the European Economic Area. In light of Brexit and the current crisis of the Union, popular approval in these countries for staying out of EU is as high as ever – even if the Brexit discussion has caused discontent with the ‘Norway option’ among the country’s Eurosceptic left. 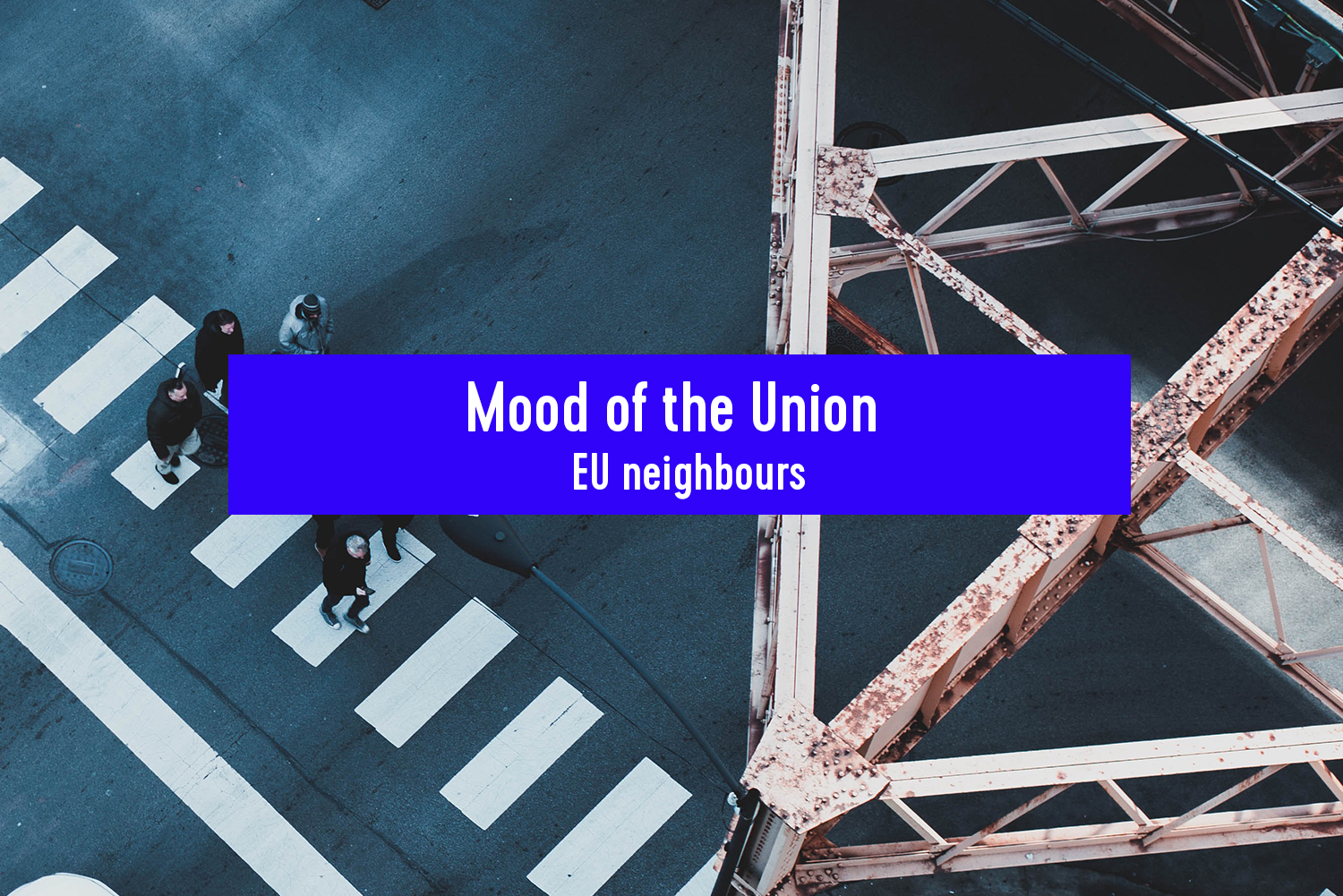 Ask people in the Western Balkans when they think their country will join the EU and you might hear some variation of a joke: ‘when the EU no longer exists’. Questions most pertinent to Serbia, North Macedonia and Montenegro going into the European elections are whether the outcome will improve their chances of joining the enlargement-averse union, and what kind of EU they will be joining if they ever get there. The elections aren’t being given much attention in the region, but the public is aware that there is an emergent ‘Europe of nations’ camp represented by Hungary’s Orbán and Italy’s Salvini, now offering an alternative to the traditional guard personified by Merkel and Macron.

At a recent meeting in Berlin, Merkel and Macron signaled that no Balkan country would be joining the EU anytime soon. Instead, they emphasized the need for ‘stability’. The word stability has become a euphemism for support for the region’s authoritarian leaders.

Despite this, regional support for EU accession remains high. In Serbia, 55 per cent of people say they would vote to join the EU tomorrow. In Montenegro, that number is 65.9%. Nowhere is the mood more Europhilic than in the country recently rechristened North Macedonia to resolve its decades-long name dispute with Greece, where 83% of people would support EU membership.

But these attitudes may not last. In North Macedonia, there is concern that despite the fawning praise from Brussels for its new pro-western government’s historic compromise with Athens, the achievement represents little more than a symbolic victory for the EU at a time when it desperately needs a positive story to tell itself. What the EU has to offer to North Macedonians is yet uncertain. Last year, ex-PM Nikola Gruevski of the nationalist opposition party VMRO-DPMNE secured asylum in Hungary to avoid corruption charges. Like the Orbán government, VMRO waged a public ‘Stop Soros’ campaign against their opponents, who are now in power. In addition, Hungarians with ties to Orbán have made investments in local media, with an editorial policy favoring the European populist right.

Montenegro and Serbia are both currently experiencing large anti-government demonstrations. In Serbia, they are led by an ideologically disparate coalition of opposition parties. This united opposition, Savez za Srbiju, mirrors the Vucic government’s own lack of coherent ideology: some leaders have connections with rightwing parties in the EU, such as Germany’s AfD, while others are linked with the Progressive Alliance of Socialists and Democrats. Like Vucic, they have cultivated ties with both Russia and the West. Following the EP elections, the government and its opponents can shapeshift to accommodate the prevailing mood on the Union. Vucic has also promised that he will resolve Kosovo’s status. But in exchange for recognizing Kosovo’s independence, Belgrade has said it expects something significant in return – something like an EU membership. As long as this remains a distant dream, so too does the resolution of the Kosovo issue.

Djukanovic in Montenegro has ushered the country into NATO, earning him goodwill abroad despite his decades-long, undemocratic rule. His opponents nurse close ties to Russia and are well-versed in anti-globalist rhetoric. As such, they are politically unpalatable to the current EU mainstream. Unless that changes, and Montenegro becomes the EU’s next member state, it will likely do so with the same leader it has had since 1991 – calling the very meaning of ‘EU values’ into question.

In both Montenegro and Serbia, the EU will also be forced to accommodate China, if for no other reason than to prevent both countries from slipping from its financial and regulatory grip in public infrastructure bidding and financing. The ‘Europe of nations’ camp of Orbán and Salvini has signaled that it is more than willing to accommodate China.

Meanwhile, hundreds of thousands of people emigrate each year from all three countries to EU continues, and will continue to do so, regardless of the outcome of the European elections. If the EU doesn’t come to the Balkans, the Balkans will come to the EU.

Norway: EU membership in all but name

On 22 March the prime ministers of Norway, Iceland and Liechtenstein attended the European Council as honorary guests in order to mark the 25th anniversary of the Agreement on the European Economic Area (EEA). However, few if any journalists drew attention to the event, which was largely eclipsed by the Council’s meeting the day before and news of yet another postponement of Brexit.

The EEA agreement entered into force in 1994 and became the fall-back option for Norway’s ‘European integration’ after a referendum that year in which 52.2 percent of voters said no to Norway joining the Union (down from 54 percent in the first referendum in 1972). But after neighbouring Sweden and Finland opted to join the Union the same year along with Austria, the agreement lost much of its potential as the basis for a distinct power block. The small country of Norway became the senior member of a group comprising the even smaller states of Iceland and Liechtenstein.

Since the beginning of the eurocrisis, surveys have indicated an increasing reluctance among Norwegians to join the European Union, with only around 25 percent currently being in favour. The EEA agreement, on the other hand, continues to be well thought of by Norwegians – with the latest poll showing 60 percent of respondents to have a positive view of the agreement.1

The EEA agreement equates to EU membership in all but name, as it requires all EU rules and regulations to be incorporated into national law. While there is an option to veto the implementation of new directives, this has never been used against the 11,000 directives implemented thus far. Indeed, as pro-Europeans have pointed out ever since 1994, the defining feature of the EEA agreement is the lack of political participation it entails, or as some retort, that it provides the alleged benefits without all the political ado about gaining some form of elusive influence over European institutions.

Obstacle to a more just society?

With Brexit looming the EEA agreement has again become the subject of debate both inside and outside of Norway, with a ‘Norway option’ being discussed in the UK as a form of soft Brexit. However, as the EEA agreement actually necessitates everything that Leave voters supposedly voted against – especially the free movement of  labour – it has failed to garner much support.

In contrast to the debate in the UK, where many on the Left consider EU membership to offer social safeguards, significant sections of the labour movement and the Left in Norway perceive the EU as an obstacle to a more just society – precisely because of the EEA agreement. A populist surge in the European Parliament elections will undoubtedly embolden their demand for a renegotiation of the agreement that was regarded as a temporary solution when it was signed a quarter of a century ago.

To read more on EU member countries’ popular sentiment and domestic political reactions to the EP elections, and to explore and compare big data on their their development of the past two decades, check out our visual project ‘Mood of the Union: Facts and Figures.’

Published 14 May 2019
Original in English
First published by Eurozine

The Balkans and the EU: Looking for a way forward