Greece, Portugal and Germany before the EP elections

The outcome of this year’s European elections is more likely to be determined by the state of nations’ finances than their media landscapes. However, the making and breaking of coalitions is something that money still, it seems, cannot buy.

If, as predicted, the Social Democrats receive less than 20 percent of the vote in Germany in the forthcoming European elections, it could spell the end of Germany’s grand coalition. This despite the party’s campaign for grand projects such as a European minimum wage and genuine determination across the board to engage in common European policies.

In Greece the effects of the economic crisis – and lack of solidarity among European institutions and member states in dealing with it – continue to be felt ten years later. Thus interest in the EP elections is extremely limited.

In Portugal, on the other hand, a historic leftist coalition is now able to look back on a highly successful four-year term, in which the country has reversed austerity, restored social rights and grown its economy. Meanwhile, nationalist populism appears to be almost completely absent and support for the European Union is among the highest in Europe, despite regular criticism of the current neoliberal European Commission. 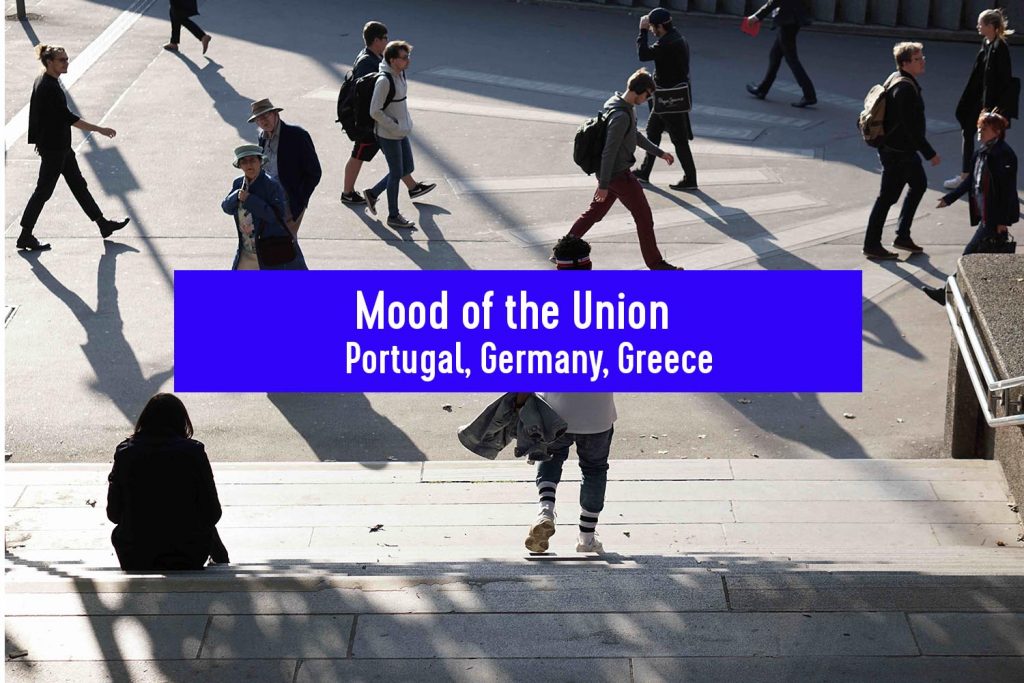 Photo by Tina Bosse on Unsplash

The EP elections take place in Greece at the same time as the Greek municipal elections. However, while there is extraordinary interest in the latter, scarcely anyone seems to be paying much attention to the former.

In Thessaloniki for example, Greece’s second largest city and the capital of the Central Macedonia region, more than 20 parties and hundreds of candidates are to participate in the municipal elections. These unprecedented numbers have prompted scepticism and mocking from bloggers, journalists and the general public on social networks.

As for the European elections, apathy and disinterest are at an all-time high. For most Greek people, the European Parliament is an institution in a faraway place that never helped them deal with the economic crisis – which will have persisted for an entire decade this year. The situation is not expected to change any time soon. So why bother at all?

TV and radio sources, as well as online media have entered into a strange state of seclusion, reporting less and less on international developments. Perhaps the only people to show interest in the European elections are the candidates themselves, who want to be elected in order to receive those MEP salaries, which are rather competitive compared to the Greek average (not to mention sometimes rather lavish expenses and generous pension options).

Polls indicate that the traditional rightwing New Democracy party can be expected to win 9 of the 21 seats available. The ruling party Syriza, with its leftist roots and now rightwing policies, is predicted to win up to seven seats. The notorious extreme right Golden Dawn is expected to win two mandates, as is the so-called Movement for Change, a centre-left alliance derived in part from PASOK, one of two main parties (New Democracy being the other) established after the collapse of the country’s military junta in 1974. After this, the dawn of the current era of democracy in Greece, PASOK went on to dominate politics for over three decades until it was punished for its handling of the economic crisis in national elections in 2015, where its share of the vote completely collapsed. Finally the Communist party KKE may just about scrape together enough votes to win the remaining one or two seats.

For all other Greek citizens who have been repeatedly disheartened by Europe’s utter lack of solidarity towards them, the European elections are simply a forgotten tale in an old European book that was once of great value until financial forces rendered it obsolete.

The 2019 European elections are treated in Portugal as the prelude to the general election due in the autumn. They will be a test of the government and its historic leftwing parliamentary coalition between the Socialist Party, the Unitary Democratic Coalition (CDU) and the Left Bloc. They will also offer another opportunity to take the pulse of the fragmented Right and confirm Portugal’s absence on the map of European nationalist populisms.

During a highly successful four-year term for the ruling coalition, Portugal has seen austerity reversed, economic growth, the restoration of social rights, a reduced deficit and the balancing of the country’s finances. The country’s independent Minister of Finance Mário Centeno was promptly appointed president of the Eurogroup in 2018. It is still uncertain how the liberal-conservative Social Democratic Party will perform following a recent increase in popularity in the polls. The development of relations within the Left will also be particularly interesting to watch as we head towards the autumn, especially when it comes to those between the Socialist Party and the Left Bloc.

Portugal has a highly plural media landscape, to which almost all political forces have access, be it in print, online or broadcast. Coverage of one new campaign may attract significant attention, following the arrival of a set of new rightwing political parties on the scene, some of which are trying to capitalize on the Europe-wide nationalist-populist trend. A case in point is the new alliance Chega Europa (‘Enough Europe’), a strange combination of D21 (liberals), PPM (monarchists), Chega itself (xenophobes and populists) and PPV (an anti-abortion group). It is aiming to surpass the minimum threshold required to win a single seat in the European Parliament.

It is an open question as to whether this new polarization will prompt a decrease in electoral apathy during the European elections, in which only around 35 percent of the population tend to vote. The efficacy of fake news, external influences and biased usage of social media also remain to be seen in a country where support for the European Union is among the highest in Europe, despite regular criticism of the current neoliberal European Commission.

The European elections tend to be something of a domestic affair in Germany. Much of the electorate attributes little significance to their vote, other than as a means of delivering a verdict on the current government. Equally, most pundits are accustomed to interpreting the results as an indicator of the state of the nation rather than of Europe.

The Social Democrats (SPD) are rumoured to be considering leaving the grand coalition with Angela Merkel’s Conservatives after 26 May, should they hit a historic low of less than 20 percent on election day – as predicted. However, there are other signs of change. Germany is less inward-looking now than during the eurocrisis, when the broad public turned a blind eye to the disastrous consequences of austerity programs in Southern Europe, largely imposed by Berlin. It took the reality checks of Brexit and Donald Trump’s win in the United States to trigger consensus on the urgency, if not inevitably, of common European policies. Now the necessity of strengthening the European Union has gained broad support, even if it remains somewhat unclear what this actually means.

The conservative centre, the rise of the Greens, and a European minimum wage

This gradual shift from general but vague support for the European idea to a greater awareness of European politics has been mirrored early on in the campaign. Nowadays it is not only the traditionally pro-European parties like the Greens – who are predicted to take second place after the Conservatives – presenting bold European visions. Even the liberal FDP, which had adopted a rather eurosceptic stance in the run-up to Germany’s 2017 general election, is now calling for a deepening of the eurozone. The SPD has also tried to underscore its European credibility with demands previously unheard of, including that for a European minimum wage.

Meanwhile, the Conservatives are having to attend to their somewhat tarnished image as a proud European party due to their misalliance with Viktor Orbán’s Fidesz and their lukewarm response to Emmanuel Macron’s proposals for a major overhaul of the eurozone. But explicitly anti-European positions can only be found in one, now major, political force: bowing to pressure from its rank and file, the far-right eurosceptic Alternative for Germany (AfD) is now musing about a ‘Dexit’: Germany’s exit from the EU. This is, however, no sign of the times, as the general mood in Germany today is pro-European.

Up next in the series ‘Mood of the Union’: Slovakia, Finland and the Netherlands.