When the Mueller Report failed to provide conclusive evidence that the Trump campaign had colluded directly with the Russian government in 2016, there was outrage. That Trump had merely welcomed Russia’s ‘sweeping and systematic’ interference was felt to be insufficiently damning. That says a lot about how the issues of electoral interference and ‘information war’ play out in domestic politics.

By seeming to fixate on exogenous influence as the primary cause of political failure, anti-populists expose themselves to the charge of blame-shifting – of being bad losers. Liberal complacency and a sense of entitlement may indeed play a part in the narrative of foreign meddling. But the reverse is certainly not true: that anti-liberals and populists only deal honestly and fairly and do not benefit from external support.

The reality is somewhere in between. Among researchers, the consensus is that anti-liberals in the West avail themselves of foreign disinformation and other forms of interference, of which there is no shortage, whenever it suits their purposes. Likewise, Russia promotes anti-liberal forces in the West in so far as they suit its purposes. However, objective observers emphasise that the great majority of disinformation is created and spread by domestic actors. This is crucial.

Far from being the root cause of what we associate with the rise of illiberalism, disinformation is its symptom or, better, its medium. As Péter Krekó argues, disinformation must be understood in the context of a much more fundamental political phenomenon: hyper-partisanship and tribalization. ‘In order to be successful in tribal wars,’ Krekó writes, ‘we need tribal myths: weaponized information against other perceived tribes. Disinformation provides raw material for such myths, which are then used to justify transgressive political acts.’

This observation rings all too true in the UK case, where – according to Adam Ramsay – disinformation was used to inflame hatred of a ‘broken political process’. Writing on December’s elections, he argues that the Conservative strategy was simple: ‘wage war on the political process, on trust, and on truth. Ensure the whole experience is miserable, bewildering and stressful, then ask voters to make it go away.’ This is the now the Conservative government that has announced its intention to massively scale down the BBC and privatize its funding.

A combination of neoliberal dogma and populist opportunism, this assault on an internationally respected public service media organization is so obviously incompatible with countering disinformation that one cannot but conclude that the intention is the opposite. Which is not to say that the BBC is beyond criticism, or that legacy media are the sole guarantors of trustworthy information.

As Dan Hind argues, throughout the Cold War and into the post ’89-era of Gulf conflict and financial crisis, legacy media have been complicit in the orthodoxies of national political elites. The new alliance between legacy media and social media platforms is far from being motivated by genuine concern at disinformation, he suggests. Where both sets of interest converge is in shutting down alternative democratic channels of information. Micah Sifry shares his analysis but argues that democratic oversight rather than popular ownership of the media, particularly social media, is the solution.

Arguments for cultivating independent media in the face of the disinformation threat have a different emphasis in the context of a country such as Poland, with its experience of Russian aggression. Wojciech Przybylski calls for the concept of ‘information sovereignty’ to be reclaimed from autocratic governments for whom ‘hybrid war’ is a pretext for monopolizing national media. What Poland needs is more, not less foreign investment in the media sector. Adam Lelonek also sees the media as central to the defence of democracy, arguing that journalists must embrace their role as actors in the security space.

Realizing that regulation alone cannot combat disinformation, policy makers have been turning to media literacy as a sustainable strategy. Antonija Letinić reports on initiatives in Croatia to restore journalism to its proper democratic role. Howard Rheingold confirms that ‘crap detection’ is an essential skill – along with literacies of attention, participation, collaboration, and network awareness. But only in combination with regulation of the platforms does media literacy have a chance of overcoming the ‘forces of deception’. And Sidney Tarrow, discussing ‘deep fakes’, argues that concerted action by civil society groups, states and social media intermediaries can nip this new danger to democracy in the bud.

Thinking about ‘what to do’ about disinformation means understanding information’s positive quality as a public good. Abandoning a purely reactive strategy will stand democracies in better stead. Contributions to the new Eurozine focal point ‘Information: A public good’ reflect this way of thinking. 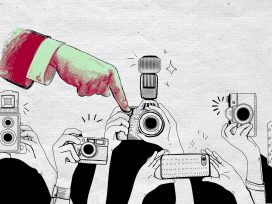 © Eurozine
This Focal Point is co-funded by:

The pandemic and the volatility of international politics have given an upper hand to Russian intelligence services interested in spreading disinformation. Georgia has become a test field for new cyber warfare since the 2008 war and offers invaluable lessons on what to expect.

From anti-vaxxers to terrorists, people often look for hidden causes which match the magnitude of the collapse they are facing. Uncertainty and public distrust are fertile ground for conspiracy theories. When used to legitimize violence, however, such narratives are more a strategy than psychopathology.

Bellingcat’s pathbreaking work on the shooting down of MH17 and on chemical weapons use in Syria has led to open source investigation being recognized as a vital journalistic technique. Eurozine talks to Bellingcat founder and director Eliot Higgins about both stories and the disinformation around them.

The BBC bounces back

In the months before the corona pandemic, the BBC had been battling for its political survival under a constant barrage of criticism. Then, as the crisis hit and ratings for news services rose, the government’s anti-BBC rhetoric started to disappear. Has the emergency changed attitudes to the broadcaster?

The business of disinformation

Disinformation is not always ideologically motivated. On the contrary, most fake news websites serve primarily to make money. The disinformation economy relies heavily on Facebook and Google Ads, a report on five eastern European countries shows.

For many journalists at Radio Algérienne, the broadcaster’s failure to cover the Hirak protests last year was the final straw. Thirty years after Algeria had formally adopted a multi-party system, its public media remained no freer than they had been during the days of the FLN.

The degradation of politics

The Italian far-right’s use of social media to inflame hatred is unprecedented in its extent and intensity. The result is the degradation of political discourse in an already under-regulated media environment. Countermeasures are emerging but the problem is structural and partly rooted in the commercial model of social media.

National populism in North Macedonia is kept in check by the European consensus. Macedonism runs deep, however, and has the potential to erupt. The resumption of the EU accession process is likely to ensure that, unlike its neighbour Bulgaria, North Macedonia stays on a democratic course.

In order to understand disinformation, we need to look beyond its content. Bulgaria provides a stark example of how structural changes in the media environment force journalists to become unwilling participants in the propaganda cycle.

COVID-19 in the disinformation ecosystem

From genocidal accusations to alleged cures, the coronavirus pandemic is accompanied by a swathe of conspiracy theories. These are perpetrated not only by clickbait websites but also authoritarian regimes who exploit the scare for political purposes and try to shift the blame from their failing responses. An international survey and a detailed case study.

Globalization was supposed to connect people but instead ended up connecting the powerful. Local news is rapidly disappearing, a side-effect of digitalization and the ownership concentration in media markets. In an age of technological changes and political pressure, niche publications and a renaissance of zines lead the quest for new, sustainable models in publishing.

The combination of attention engineering and targeted disinformation is destroying the democratic public sphere. What is the solution? Net literacy, though essential, is not enough, argues Howard Rheingold. The monopoly power of the internet companies must be curbed.

Thinking about ‘what to do’ about disinformation means understanding information’s positive quality as a public good. Abandoning a purely reactive strategy will stand democracies in better stead. Contributions to the new Eurozine focal point ‘Information: A public good’ reflect this way of thinking.

Disinformation, hyper-partisanship and the limits of regulation

Eurozine podcast pt. 1: The changing face of the media

Regulation of media platforms has become an increasingly popular response to the challenges posed by disinformation and hyper-partisanship. But does regulation set a new set of traps for free speech and media diversity? And is it even adequate to the problem?

The role of the journalist in the age of disinformation

Information aggressors are not ‘reinventing the wheel’ but exploiting existing media mechanisms and political weaknesses. Journalists have a choice: ignore this fact or accept their role as key players in the security and information space.

Information sovereignty is invoked by autocrats in central Europe to justify media control. However, this should not obscure the concept’s democratic origins. In view of Russia’s ‘hybrid war’, information sovereignty needs to be understood as synonymous with a strong and independent media.