The degradation of politics

The Italian far-right’s use of social media to inflame hatred is unprecedented in its extent and intensity. The result is the degradation of political discourse in an already under-regulated media environment. Countermeasures are emerging but the problem is structural and partly rooted in the commercial model of social media.

Digital media’s impact on democracy was initially expected to be highly positive. It was hoped that the dissemination of information online would facilitate a rich, open and inclusive public domain characterized by broader, pluralistic debate. However, the reality has been quite different.

Despite the internet’s potential for disintermediation and its egalitarian forms of expression, based on freely available services and engaged and informed users, commercial practices increasingly colonize the online sphere. Public opinion is manipulated in a particularly deceptive manner. For the past decade, fake news, targeted disinformation and hate speech have joined concerns about mass surveillance systems. Freedom of expression and pluralism are being threatened on a global scale.

However, the situation is by no means homogeneous: significant differences exist between northwest and southeast Europe. The European University Institute’s ‘Media Pluralism Monitor’ (2017) describes the situation in Italy as particularly ‘alarming’. The country’s lack of journalistic freedom is reflected by a worrying increase in threats and attacks on journalists. 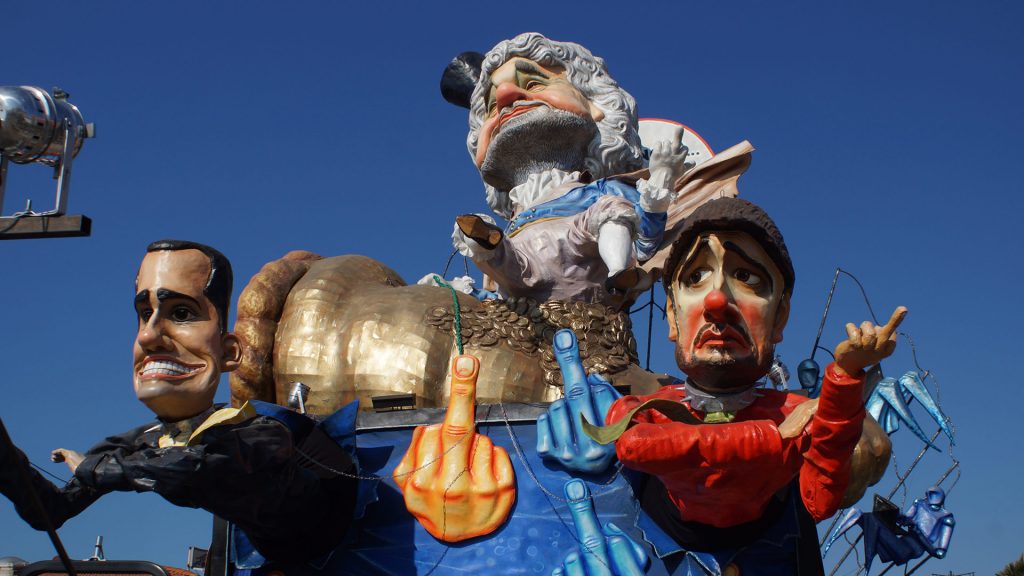 Italy has the highest recorded number of online hate speech cases in Europe. According to data from the European Commission’s Directorate-General for Justice and Consumers in March 2019, Italy registered three times as many cases as Germany and four times as many as France.

The success of Movimento 5 Stelle (M5S) is founded on the participatory image of the internet and its critique of professional journalism. Lega, renowned for its criminalization of immigration and minorities, has also seen a substantial rise in public approval and political power. Rightwing leaders such as Matteo Salvini (Lega) and Giorgia Meloni (Fratelli d’Italia) make significant use of social networks. Available sources, including the media regulatory body AgCom’s 2018 study of online disinformation, point to a disconcerting prevalence of the issue of immigration on social media.

Sources also highlight a link between voting cycles and upsurges in offensive and discriminatory content. Amnesty International’s 2018 report on Italy noted the negative targeting of immigrants, women, Roma and Muslims. Hate speech played a ‘central, qualitative role’ in the country’s 2018 general election campaign. And in the months post-election, ‘attacks on solidarity and those actors concerned was normalized’, as exemplified by the treatment of NGO workers who provided assistance to migrants in the Mediterranean.

The role of politicians is far from marginal. The Amnesty report also noted a number of cases in which Italian politicians were convicted of racial and sexual slander. The best-known are those of the politicians Roberto Calderoli and Simone Pillon, and Matteo Camiciottoli, the mayor of Pontinvrea, all of whom are Lega members. A specific focus on the latest European elections, which looks at 100,000 posts and comments published on Italian candidates’ and party leaders’ Facebook and Twitter accounts between April and May 2019, reveals that 11.5% of the content was offensive or discriminatory, while 1% constituted an incitement to hatred. Politicians frequently targeted other politicians. Amnesty highlighted that politicians’ social media messages – while not legally an incitement to hatred – are enough to trigger a violent backlash among followers. Lega and Fratelli d’Italia politicians are the most frequent offenders: Amnesty’s analysis showed that around 50% of Salvini’s social media content is considered offensive and/or discriminatory.

The lack of clear distinction between official party pages and ‘personal’ pages – as well as between a post and the comments it triggers, or its citation in other contexts – allows for a rise in ambiguity and violence, all in the name of the freedom of expression. An analysis carried out by the activist network Avaaz of Facebook-use during the run-up to the 2019 European elections showed that Facebook removed around 300 pages and accounts (with approximately 13 million interactions and 6 million followers) out of around 500 reported (with 32 million followers and 67 million comments, likes, shares and 553 million views). The removed pages had three times as many followers as the official Facebook pages of all far-right and anti-European parties put together.

Lega’s official page has a particularly large online presence: its near 4 million online interactions doubles that of Germany’s Alternative für Deutschland. Avaaz identified 14 networks, 113 pages and groups, and 49 profiles that had disseminated fake news or content containing divisive anti-migration and hate inducing messages in support of Lega and M5S; together, they had 18 million followers and 23 million interactions. Facebook removed 23 of these pages, which in total had almost 2.5 million followers. It removed around 60% of the other pages reported.

The Avaaz study also highlighted that, in comparison with other countries (Spain, France, Germany, the UK and Poland), profiles removed in Italy had the highest absolute levels of followers and interactions (around 2.5 million each). Only offensive Polish profiles came close, with 2 million followers and almost 1 million interactions. Italy also had a high concentration of ‘malicious’ profiles. For example, 139 out of around 320 reported profiles were removed in Germany, their followers and interactions were far lower in number: around 57,000 out of 890,000 followers and 196,000 out of around 2 million related interactions. An Oxford Internet Institute survey of tweets about the European elections in various languages between 5 and 20 April 2019 reveals that a far higher percentage of Italian language posts came from ‘junk news’ sources (8.7%) than those in French (1.4%), German (2.8%), English (1.4%) and Spanish (1.6%). Only Polish tweets (21%) significantly outweigh the Italian percentage, while tweets in Swedish (6.7%) came closer.

AgCom, Italy’s independent media regulatory body, has no authority to inspect and rectify this situation, not even during election campaigns. There are no national regulations on online and social media access to information during elections, nor on the circulation online of pre-election polls or on pre-election silence. This regulatory vacuum is at odds with expectations raised by AgCom’s intensive two-year investigation on the issue of disinformation and hate speech.

At best, self-regulation has drawn attention to campaign advertising, messaging and investment by various political forces, confirming their interest in these propaganda tools. OpenPolis’s ‘bottom-up civil society monitoring’ strategy for political messages on Facebook – introduced in partnership with Propublica in 2018 – was also notable. It used software that allowed users to transfer political messages from Facebook news feeds onto a public archive, thereby making personalized campaigning visible. The initiative was subsequently quashed by a technical alteration to Facebook.

Given the situation’s complexity, action must be taken on several fronts. Education and media literacy are crucial, as are civil society monitoring and academic research. Equally important are European initiatives to promote information dissemination, such as the European Data News Hub, which includes news agencies from various countries, or the European Data Journalism Network, a project of the Leading European Newspaper Alliance. Also important are international fact-checking networks such as the Social Observatory for Disinformation and Social Media Analysis, as well as the Rapid Alert System, a network of 28 national contact points for the authorities of EU Member States. The European Commission also promotes a number of important self-regulatory measures for the major companies (Facebook, Twitter and Google, and Microsoft) through its Action Plan Against online disinformation. The results are interesting, even if the Commission itself has deemed them only partially satisfactory.

Illegal, offensive content is now being removed quicker and more extensively. Paid ads – their content, cost, who posted them and at least certain information about their target audience – are now more transparent. However, it remains to be seen whether market operators will be the only ones to benefit from this. Facebook has changed its content selection and algorithm, which now prioritizes personal contacts. However, this may not significant alter trends within social networking and might even encourage more intensive data mining of user relationships.

Measures introduced after the European elections at institutional, civil society and journalistic levels have partially increased transparency and countered the most blatantly false, manipulative forms of online communication. The EU’s 2019 Report on the Implementation of the Action Plan against Disinformation underscores that ‘questions remain about the effectiveness of the transparency measures taken by all signatories’ and highlights ‘the lack of engagement from the advertising industry’. The Commission reserves the right to take further action, including those of a ‘regulatory nature’.

Self-regulation seems impractical. But if the digital public sphere’s privatization, quasi-monopolization and user-profile commercialization is not addressed, the internet giants could become ‘super-editors’ with increasing political powers of surveillance. More decisive action must be taken. Cass Sunstein’s proposal for a ‘serendipity button’ that would encourage random access to social network and search engine resources does not go far enough. Avaaz has called for online platforms to amend fake and misleading news, and to publicize any corrections. However, as long as clicks, likes, shares, followers, retweets, views and downloads – in a word, so-called ‘engagements’ – remain the most profitable user-generated revenue for platforms and advertisers, it will be impossible to alter this increasingly imbalanced exchange. Citizens’ freedom of political and even economic choice is at stake. Any action must address this point.

The EU General Data Protection Regulation, which came into force in May 2018, could be a good starting point. We can still oppose the reduction of people ‘to bundles of endlessly available information’, as Antonello Soro, President of the Italian Data Protection Authority, put it. And, amidst the uproar over disinformation, the trap of oversimplification must be avoided. Large proportions of the media and political sectors are involved in this degradation of information exchange, and democratic rules and fundamental principles need to be reasserted across the board. At the same time, it would be wrong to think that societal anger and the rise of the far-right are merely the result of social media. These phenomena are deeply rooted in the structure of contemporary politics and society.

Within this troubled context, the emergence of a new anti-souverainist movement in Italy is significant. The ‘Sardines’ held their first flash mob in the leftwing stronghold of Emilia-Romagna just over two months before Italy’s regional elections at the end of January 2020. They represent a clear opposition to the M5S-PD government that was formed in summer 2019, following the collapse of the previous M5S and Lega coalition. The Sardines target Salvini’s Facebook politics, manipulative online communication and, more generally, the degradation of political exchange and public discourse. The movement has held counter-rallies held near locations where Lega holds its meetings or where it is tries to win seats. Regardless of their actual capacity to mobilize political and electoral support, the Sardines deserve credit for their sheer force of numbers and vigorous demonstrations. Any action that highlights and stigmatizes the hate speech so frequently deployed by leading Italian right-wing political figures must be commended.