UK, Estonia and Latvia after the EP election

What next for Britain and the EU? Though the Brexit Party will now be one of the largest national parties in the European Parliament, combined support for the ‘hard Remain’ parties is greater still. The EP election played out as a referendum on Estonia’s government too, while Latvia was spared a populist surge.

The EP election was widely seen as a second referendum in all but name in the UK, almost three years after the electorate voted to leave the European Union in the first place. But how much longer is the country to languish in Brexit purgatory? As support for the two main parties collapses and a new Conservative prime minister is due to be announced on 23 July, this has long since ceased to be a matter of a one-off protest vote.

After Estonia’s national elections in March, the far right was admitted to the new coalition government. It has now won a seat in the European Parliament. Though the liberal Reform party topped the polls and the rest of the country’s seats remain with the Liberals and Democrats (formerly ALDE, now Renew Europe), the Center Party of Prime Minister Jüri Ratas came in third and far-right incendiary rhetoric continues to disrupt the coalition’s ability to govern.

Finally, though the political landscape in Latvia has never been more fragmented, the Baltic state came out of the elections largely unscathed by populism and with one of the country’s lead candidates in with a good chance of a top EU job. 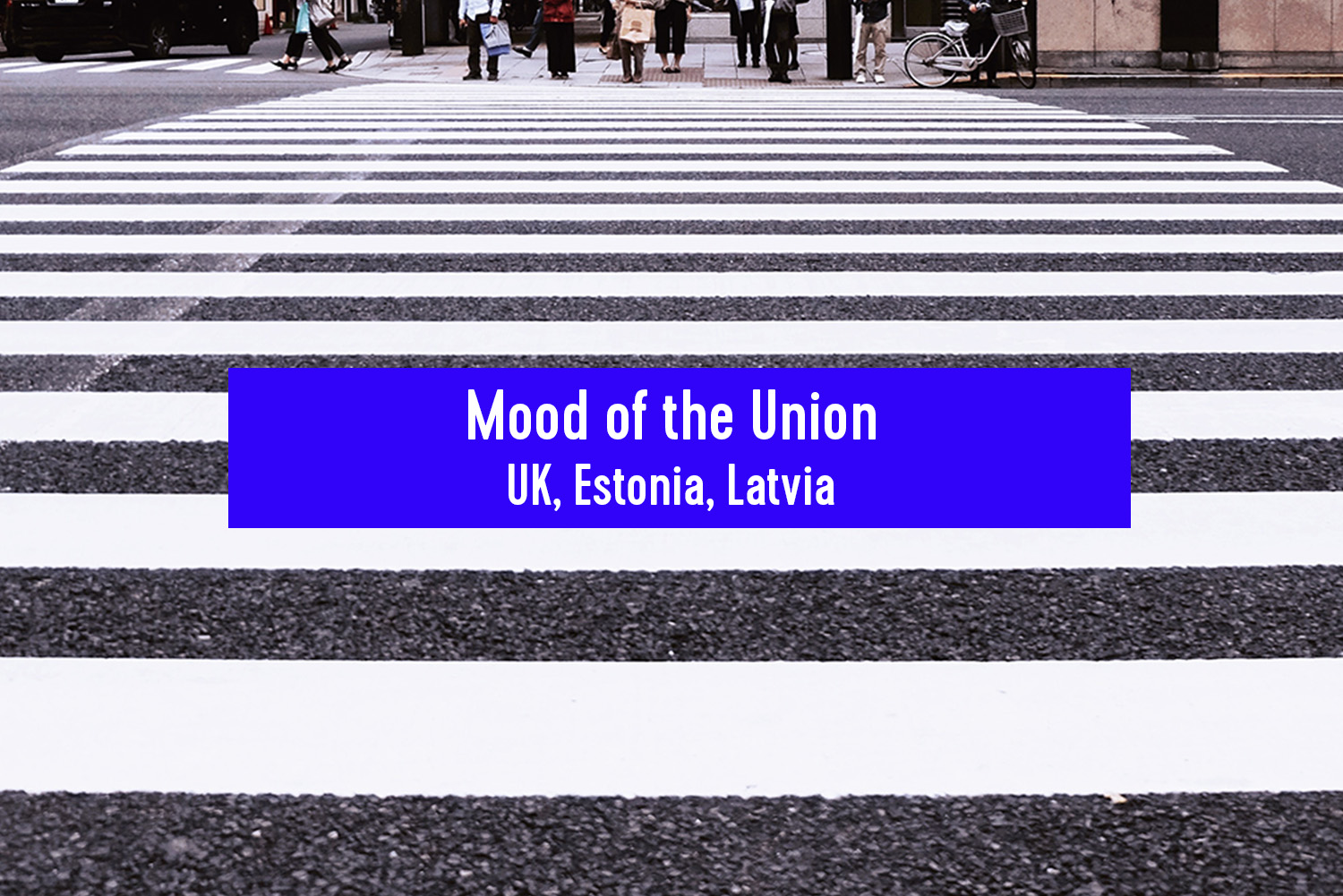 Photo by Daryan Shamkhali on Unsplash

UK: From bastion of good governance to perpetually ‘exiting’ state?

Rightly or wrongly, Britain has often been regarded by political elites across Europe as a bastion of stability and good governance. Today, however, instability rules and this ‘new normal’ of tumultuous politics shows no sign of abating. In this era of fluidity and change, voters are prepared to quickly abandon their previous electoral choices.

In the European elections, the country’s two main parties saw an extraordinary collapse in their support. Whereas at the 2017 General Election the Conservatives and Labour had a combined vote share of 82.3 per cent, in the European elections this figure came to just 23.19 per cent with the Tories scoring a woeful 9.09 per cent. This Conservative result is the worst the party has suffered in any election in the modern era of universal suffrage.

Widely seen as a second referendum in all but name, the battle to interpret the results has seen both Leavers and Remainers adamant that they now have the upper hand in the country’s never-ending Brexit debate. The remarkable showing of the Brexit Party stole many of the headlines. Nigel Farage’s new start-up emerged as the clear winner with 31.6 per cent of the popular vote. They will be sending 29 MEPs to the Parliament, making the Brexit Party one of the largest national parties in the chamber.

Remainers were keen to point out that the combined strength of the ‘hard Remain’ parties far outweighed those of their Brexit equivalents. Totalling up the number of votes for the Liberal Democrats, the Green Party, the Scottish National Party, Plaid Cymru, and Change UK gives a hard Remain vote of 40.39 per cent – considerably in excess of the combined vote of UKIP and the Brexit Party (34.9).

Whether you think of this a fair barometer or not, what was evident from the results is the dramatic collapse in support for some kind of compromise between the Leave/Remain divide; either in the form of Theresa May’s negotiated deal (the only deal currently on the table), or a softer form of exit akin to the Norway or Switzerland models.

The strong showing of the Liberal Democrats and Brexit Party underscores the extent of the polarization between Leave and Remain in Britain. This will also impact UK national politics and cannot just be seen as a one-off protest vote in a European election. National opinion polls since the EP elections have seen a sharp fall in support for the two main parties. One YouGov poll showed the Liberal Democrats in first place and the Brexit Party in second.

A type of purgatory

The two main parties are now forced to pivot to their respective lefts and rights on the question of Europe. In principle, this should be straightforward for the Labour Party because the option of remaining in the EU is the default position and the easiest to execute politically given that their members and voters overwhelmingly support it. However, Jeremy Corbyn and his coterie of close advisors remain highly resistant to making such a move. It seems now without question that this is motivated by an unspoken euroscepticism.

For the Conservatives a set of more politically difficult choices now present themselves. The party’s members and voters are demanding the hardest possible break with the EU, including countenancing a chaotic ‘no deal’. The latter is not a legally or economically viable option for any serious government. Given the practical difficulties presented by the Irish border, May’s deal is the most radical rupture on offer. Such hard truths are unlikely to win out in the Conservative leadership context now underway. It seems likely the winning candidate will be one of those standing on a hard Brexit/no deal ticket. Boris Johnson is currently the favourite. But with the EU refusing to renegotiate the Withdrawal Agreement, the new prime minister will have a limited set of options because the UK Parliament will not support ‘no deal’.

As for the result of all this turbulence for the rest of Europe? Don’t expect Britain to leave the European Union any time soon. The only practical, tangible way of doing so – a soft Brexit in one form or another – has vanishingly little support in the country. So Britain will remain in the EU, but possibly in the form of an ‘exiting’ state that never finally leaves – a type of purgatory that might befit the polity’s historical attitude to European integration.

As we predicted, the European Parliament elections turned out to be a referendum on the governing parties: the left-liberal Centre Party, conservative Pro Patria, and far right EKRE. After the Centre Party invited the far-right EKRE to coalition talks in March, it has been widely criticized by media, civil society organizations, opposition politicians, and even by some members of the party itself.

A seemingly unending series of scandals has forced Prime Minister Jüri Ratas to apologize for their coalition partner’s behaviour almost every day. EKRE now holds the record for the minister with the shortest tenure (29 hours), as their minister for IT and foreign trade had to resign after being accused of serial domestic abuse. EKRE has called for liberal journalists working in public broadcasting to be ‘punished’, promised to dismantle the administrative ‘deep state’, and embarrassed even Marine Le Pen with white power ‘OK’ hand gestures which they have called ‘pure trolling’. Combined with disappointing revenue projections, which have led to plans for budget cuts, the new government is not exactly awash with popularity.

The EP election results reflect this dissatisfaction. Though the elections have always been more about personalities than party politics, the outcome is nevertheless telling. The opposition parties, Social Democrats and the liberal Reform party won 49.5 percent of the vote and four out of six seats in the European Parliament. Smaller non-parliamentary parties collected another 5.9 percent of the vote. Raimond Kaljulaid, a former Centre Party member, who left the party in protest of its support for the far right, won 6.2 percent of the vote. Equally concerning for the Centre Party must be the loss of its traditional Russian vote. In the mostly Russian-speaking Lasnamäe district of Tallinn, the party lost half of the votes it won in the last EP elections. Still, the single seat won by the Centre Party went to Yana Toom, another prominent critic of the current coalition.

In terms of European politics, the distribution of Estonia’s six seats changed little: the far right gained one mandate, but most seats went to Renew Europe. Domestically, however, interesting times are ahead. Now that the Centre Party no longer has to fight elections, it must concentrate on governing. Two months into its new four-year term, the party is already showing signs of fatigue. EKRE’s daily cascade of incendiary rhetoric is frustrating to both coalition partners. The next few months may yield strikes by academics, rescue workers and oil shale miners. For Centre Party politicians who campaign in liberal areas, Russian-speaking areas or who already personally find the far right repugnant, the EP results are an ominous sign.

Latvia: In the absence of a populist surge

As elsewhere, the centre lost ground in Latvia. EPP member New Unity used to have four seats, now they only have two. But the feared populist surge also failed to materialize. Truth be told, it was never much of a threat in Latvia to begin with and the two politicians elected on the National Alliance/ECR ticket are both politely moderate. One cannot imagine them offering their support to Salvini’s insurrection, let alone Farage’s incendiaries.

Thus the political landscape has become more fragmented, with five parties now representing five political groups – EPP, S&D and ECR each have two seats in the European Parliament, Renew Europe and the Greens each have one. Participation was up from 30 percent in 2014 to 33.5 percent, but still below the European average.

Domestic influence and the top jobs in the EU

The European elections will have domestic political effects. Although New Unity did worse than in the last European elections, their 26 percent was a dramatic improvement on the 7 percent they received in national elections last October. This will strengthen the hand of the party’s prime minister Krišjānis Kariņš while weakening the positions of two of his coalition partners who did not make it into the European Parliament.

In a curious twist, the result might also solidify New Unity’s place in the EPP political group. Vice-President of the European Commission Valdis Dombrovskis was the undisputed individual winner in the elections, having been re-nominated by his country’s government for a second spell at the EC. Having expanded his portfolio to include financial services after the UK’s Jonathan Hill resigned in the wake of the Brexit referendum, Dombrovskis’s prospects continue to look good, not least since Kariņš has been selected as one of the two political leaders representing the EPP in ongoing negotiations.

To read more on EU member countries’ popular sentiment and domestic political reactions to the EP elections, and to explore and compare big data on their development of the past two decades, check out our visual project ‘Mood of the Union: Facts and Figures’.

Italy, Latvia and the Czech Republic before the EP elections