A thousand people for democracy

The G1000 was a citizens’ summit held in Brussels on 11 November 2011, based on the idea that Belgium’s recent political crisis was not only a national crisis, but a wider crisis for democracy. A participant describes the proceedings.

The people who set up G1000 did not, as you might suppose, have a thousand different ideas about democracy; they just had one – but it was a big one. It involved getting 1000 people – representing the “people of Belgium” – to say something useful about their society and how they were governed. Did it mean that they were rejecting the existing form of democracy? No, because Belgium already enjoys high-quality democracy. It was meant to be a significant addition to current democratic practice that could make it much more satisfactory.

The origins of the big idea

In January 2011, Paul Hermant, who writes leaders for the French press, was, almost by chance, exchanging ideas in a Brussels bistro about the political situation with David Van Reybrouck, who is well-known in Flanders, among other things for his amazing book Congo – A History. They felt that democracy had lost its momentum; that it was running out of steam and that its ossified structures had moved too far from the governed, and not just in Belgium. A group was set up and people found that they agreed with the diagnosis; the vision of a “wider democracy” was developed. A charitable organization was established because people wanted to “act”, not just write, and this provided them with a subsistence. One thing led to another and a programme was agreed; a website was created and a “Citizens’ Summit” day planned for 11 November 2011, from which would come a citizens’ report to the country that would appear in spring 2012. It was incredible how quickly this vision and concrete programme were agreed by everyone who had anything to do with it.

On 14 June 2011, G1000 was launched on radio, on TV and in the press in the north, south and east of the country. Within a few days the G1000 Manifesto had been signed by several thousand people. The approach was simple: read the Manifesto, sign it on the website if you agree, then send your proposals to be debated by 1000 Belgians, chosen at random from across the whole country. Make your contribution to the cost of the event, estimated at a total 465,000 euros; sign up to be a volunteer for one of the tasks listed, because there is a lot to be done. And please note: no one is behind us, no political parties, no lobbying organizations, no advertising, no economic or social interests. Everything is based on two convictions: first, that a “wider democracy” is something that the population regards as essential, as a need and as a goal; second, that there must be thousands of people that such a vision can mobilize. What followed exceeded all expectations. 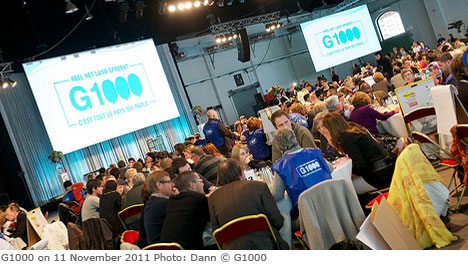 What is the aim?

The G1000 Manifesto is well-conceived. It gets to the point by explaining what it sees as the existing democratic deficit. It points out that the way of life, the technology, the means and the expectations of the people governed in our democracies have undergone major changes since the establishment of representative democracy in the nineteenth century. Back then, steam trains, even stagecoaches, linotype printing, wireless telegraphy and the earliest faltering attempts at radio communication to some extent rendered inevitable the compromise between the ideal of direct democracy and what was materially possible through elected representatives. Today, new communications technology in particular has transformed the context and the actual reasons for choosing “representative democracy”. Without in any way aiming to return to the direct democracy of the so-called Athenian “golden age”, the G1000 Manifesto maintains that “deliberative democracy”1 can be used to complement, improve and enrich the existing system of representation and create greater citizen satisfaction through increased participation.

The aim, then, is not to replace the representative system but to complement it by providing a forum for debate upstream of the political powers and decision takers (parliaments, governments), an “ante-chamber” where the important questions can be discussed for their own sake whilst avoiding, from the outset, the power struggles between parties, and without assigning responsibilities for implementing policies to anyone. This is done in such a way that the official powers in the democracy and in the parties know the views of the vox populi on the major questions affecting the common good.

Within a few weeks, the G1000 site received several thousand proposals for debate. These were not publicized but analysed, grouped and synthesised by a G1000 team. This made it possible to identify the three or four major questions to be debated on 11 November and create a working document for the 32 volunteers (“G32”) who would continue work after 11 November. 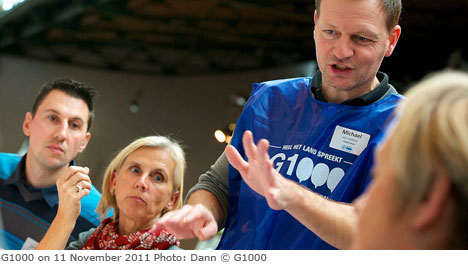 In the course of the summer, volunteers registered on the site got to work on a variety of jobs, including setting up consciousness-raising and mobilization groups across the country, manning a lively stall on 21 July in the streets of Brussels. In September an independent polling organization began the work of randomly selecting 1000 citizens from across the whole of Belgium, “in the same way that we do when we’re doing pre-election polling”. Those who replied: “Yes, OK, we’ll be there on 11 November” were then contacted by volunteer “ambassadors” who explained in greater detail the whys and wherefores of the process. In addition, hundreds of well co-ordinated volunteers were engaged in a thousand and one logistical tasks, seeing to catering, carpets, microphones, setting up a network, Internet, electronic voting, 100 tables and 1000 chairs, the recruitment and training of 100 facilitators for the hundred tables. They also set up a system to enable Internet participation from home (“GHome”) and “GOff” groups which were to hold their own “Mini Citizens’ Summit” in several towns across the country. In short, this was an incredible amount of work to be have been carried out by a voluntary organization that did not even exist six months previously. And, on that level too, everything was impeccable.

On the morning of the Great Day, just over 700 delegates finally turned up at Tour et Taxis. Some 1,600 people had been contacted; about 1,350 immediately replied “Yes, I’ll be there”. (Would you have?) Over 950 confirmed to the “ambassadors” that they would come and in the end over 700 came to spend their day off debating four major topics. In short, of the people initially contacted, one out of two turned up. This was an unprecedented success for something that was the first of its kind and that involves such a degree of commitment. Democracy can still mobilize people in Belgium! 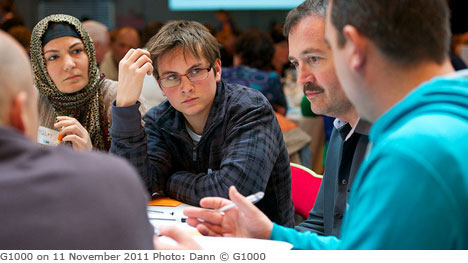 David Van Reybrouck and Paul Hermant gave resounding welcome speeches in impressively simple and fair terms. After various explanations about how the day would unfold, especially as regards the voting system, people set to work. Three major topics had been placed on the agenda: social security, survival in a period of crisis and immigration, with a fourth topic to be chosen by the assembly as a whole. Each topic was introduced in an informative and succinct manner by two “experts”. Then each table of ten, with the help of the facilitator/interpreter, debated the topic, identifying a number of problems, aspects or suggestions which, after half an hour, were passed to the central panel. The panel showed them on the large screen and each delegate, equipped with a little voting machine, indicated their two, three or four priorities. In this way they were able to arrive at an order of priority for the views of the assembly. At the same time, the “GHome” and “GOff” participants formed a kind of “hundred and first large table” and could take part, debate and convey their views via the network.

It is not possible here to reproduce the debates or their results (G1000 has undertaken to make its work known in an appropriate fashion). However, two or three things can already be stressed. First is the quality of the introductory exposés on each of the topics; second, the enthusiasm of the participants. What we also noted was the astonishing maturity of the discussions at each of the tables, combined with a surprising capacity for careful listening and close attention. Finally, we stress the surprise and admiration of the panel of eight international observers, who had never seen such a process organized spontaneously without any kind of “patronage” from the authorities. 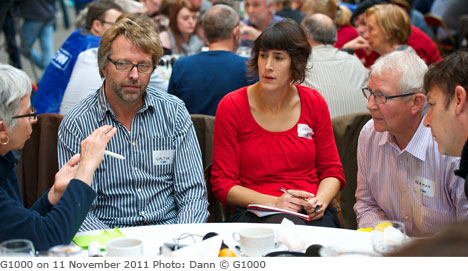 Of the 700 delegates present, 300 (!) volunteered to be part of the “G32” group and to continue discussion for three working weekends from now until the end of April 2012. The “Report to the Country” by G1000 is to be published soon after that.

In the meantime, remember a remark by one of the facilitators during the buffet dinner at the end of the day: “The conclusion on my table was that each of us has learnt a new way to talk politics to each other; we’ve changed since this morning!” Even if it amounted nothing more than that, it was worthwhile, don’t you think?

Let the political pundits to decree, after due deliberation, precisely which scientific epithet (if any) should be attached to the version of democracy pursued by G1000: deliberative? participatory? consultative? wider...? Personally, I will stick with the terminology used in the G1000 Manifesto and claim to do no more than report on "something that is happening in our neck of the woods"!