Ireland, Poland and the Western Balkans after the EP election

The European elections have been key to determining citizens’ priorities, albeit with one significant caveat in Ireland. In Poland, voters clearly care more about social welfare than abstract issues like rule of law. And issues of real consequence for the Western Balkans may finally be addressed, now that the elections are over.

While turnout improved across the EU last month, in Ireland it declined, not least because of the absence of a far-right threat. The Greens gained two seats, having had no representation in the last parliament at all, and the radical left enjoyed a better showing than they tend to in domestic elections. There was also something of a skewed result among the country’s two largest parties.

Pollsters were wrong footed in Poland concerning the efficacy of the ‘European Coalition’, a group of centrist parties opposing the ruling Law and Justice (PiS) party. With this autumn’s national parliamentary elections fast approaching, harsh lessons need to be learned quickly if a strategic rethink can have any chance of loosening PiS’s grip on power.

Meanwhile, timing is everything in the Western Balkans. Just days after the vote, the European Commission published its annual report on the prospects for EU enlargement in the region. This may well focus minds on the delicate issues that the region’s countries face, though the EU’s own lack of consensus about the way forward may prove a major obstacle to their resolution. 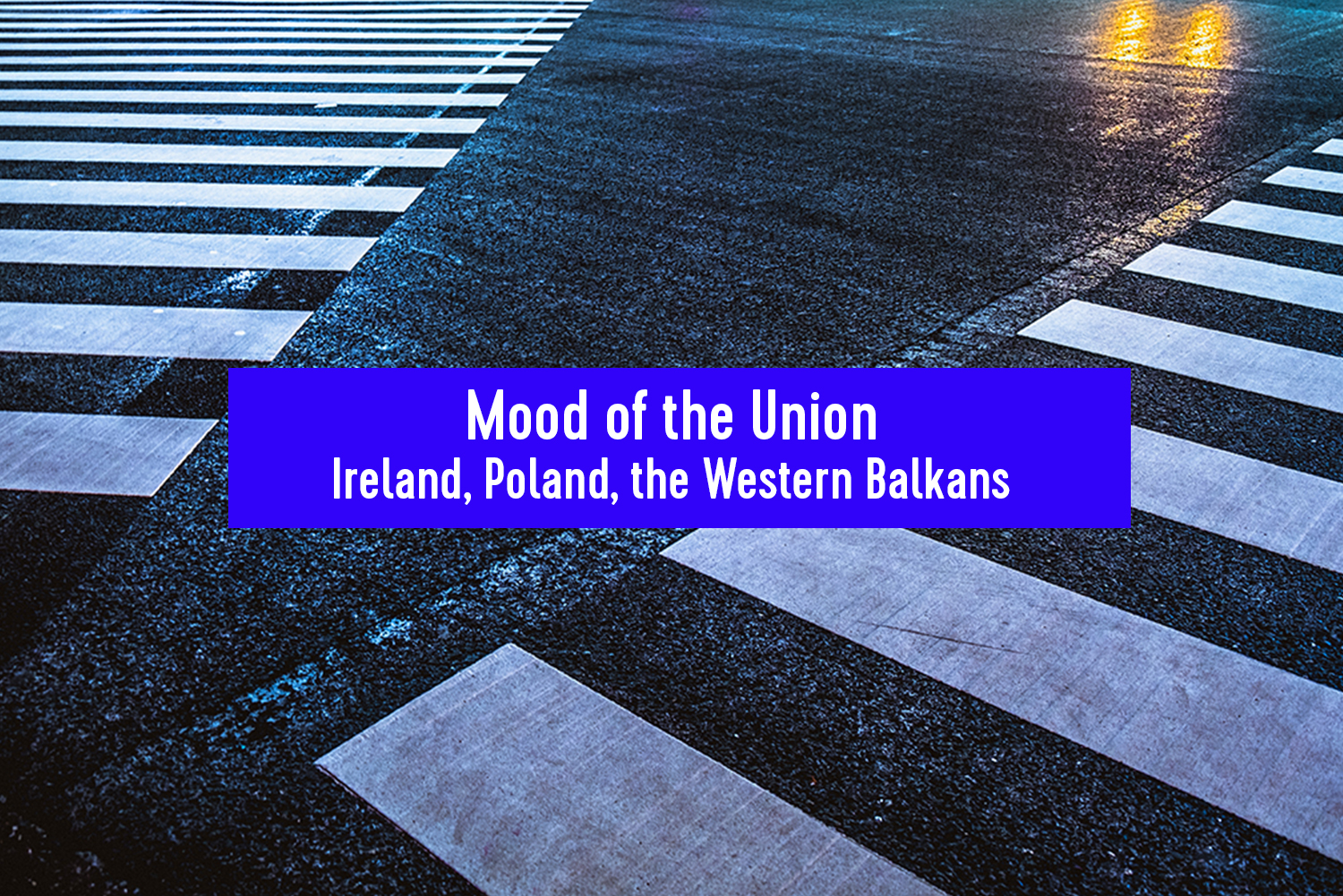 Photo by Erik Eastman on Unsplash

One of the features Ireland shared with some other, chiefly Western European electorates, was a turn towards the Greens. Though not quite the huge ‘surge’ that was predicted after exit polls, the party made a creditable jump from 4.9 percent to 11.4 percent nationally, and from no seats to two.

However, while in most member states turnout increased, it declined in Ireland. If the increase elsewhere was provoked by the existential challenge that the far right posed to Europe (and the response to that challenge), in Ireland there was no such spur as the far right scarcely exists. Anti-immigration and anti-European views were given an airing by some independent candidates, but on the whole these themes are not yet vote-winners here. No far-right MEPs were returned.

Determining the priorities of the citizens

Voting took place on the same day as local elections, with more media interest in the latter (seen as a better indicator of public opinion ahead of the next general election). The division of seats, including the two which will only be occupied after Brexit, was Fine Gael/EPP 5; Fianna Fáil/ALDE 2; Greens 2; I4C, a loose leftwing coalition whose MEPs will probably be affiliated with GUE/NGL, 2; Sinn Féin 1; Independent/GUE/NGL 1.

In some ways these figures illustrate the peculiarity of European elections. First, the radical left is not quite as strong nationally as four seats out of 13 would suggest. Second, the actual relative strength of the two biggest (centre-right and centre) parties looked totally different, and is probably more faithfully reflected in the local election results, where Fine Gael received 25.26 percent and Fianna Fáil 26.92 percent of the vote. European elections are important in determining the priorities of the citizens. But they can also return rather freakish results.

Harsh lessons for the Polish opposition

The victory of the ruling Law and Justice (PiS) party in Poland has certainly set the tone for the country’s autumn parliamentary elections. The most striking result concerned turnout, which at 45.68 percent was nearly double than in 2014. This means Polish society is expected to be relatively engaged throughout the next couple of months as the national campaign gains momentum.

Prior to the EP elections, most polls and observers had expected the final result to be extremely close. The majority of centrist opposition parties on the left and right had united to form the European Coalition and challenge PiS’s dominance. It had seemed that a tie, or even victory over the ruling party, was on the cards. The final results, however, brought a crushing victory for PiS and new questions as to whether the opposition’s strategy will be effective in the autumn.

PiS won the election with 45.4 percent of the vote, with the opposition achieving a distant second and 38.5 percent. The new progressive Wiosna (Spring) party received 6 percent of the vote, just inching over the 5 percent threshold. Other parties, including the far-right Konfederacja (Confederation) which campaigned on eurosceptic and antisemitic slogans, did not make it into the European Parliament.

The election result is now forcing the centrist opposition to rethink its strategy. The outcome shows that Polish voters clearly care more about social welfare support programmes and less about abstract issues like rule of law. It also proves that the opposition needs to create an attractive programme of its own rather than merely campaigning against the ruling party.

The urban-rural divide is another issue to bear in mind, as cities were largely won by the European Coalition, while the countryside voted overwhelmingly for PiS. Critics note that the opposition spent too little time campaigning outside the main cities, while PiS was extremely active in medium-sized cities, small towns and villages, where they met with locals. In just a few months’ time, we will find out whether or not the opposition has learned the harsh lessons of the European elections.

The Balkans in limbo

Some decisions of real consequence for the Western Balkans may finally be addressed now that the European elections are over. The release of the European Commission’s annual country reports on the region was delayed until after the elections so as not to stir populist sentiment on the touchy issue of enlargement ahead of the vote. With the reports now out, apprehension bordering on panic is beginning to set in in some capitals.

All eyes are on North Macedonia. The country signed the historic Prespa Agreement with Greece last summer, adding ‘North’ to its name and settling the longstanding dispute over ownership of the name (and associated history) of Macedonia. As a reward, the European Commission has recommended that the EU immediately start membership talks with Skopje.

But individual EU member states are not ‘speaking with the same voice’ on the issue of enlargement, and North Macedonia’s membership talks have controversially been linked with Albania’s. Reportedly, this is not a move that Merkel’s CDU supports, while France has been particularly reticent about enlargement per se. EU member states were expected to discuss the opening of negotiations with North Macedonia at a meeting in Luxembourg later this month, but Paris and Berlin have postponed that discussion to September.

In the meantime, leaders in Skopje and their foreign supporters have warned that the EU’s failure to reward North Macedonia for its historic compromise with Athens could be catastrophic. Prime Minister Zoran Zaev has said he will resign if the EU refuses to open negotiations. He has warned that early elections are also a possibility. Some analysts predict failure to move forward with membership talks will mean rising euroscepticism not only in North Macedonia but across the Balkans, saying that the country could fall prey to other, more malign foreign influences as a result.

Delaying a decision on North Macedonia’s future in the EU could carry other consequences as well. The conservative New Democracy party (ND) beat the ruling Syriza in the EP election in Greece, prompting prime minister Alexis Tsipras – who ratified the Prespa Agreement with Zaev – to call early elections for 7 July. New Democracy opposes the Prespa Agreement. If ND wins the upcoming election, and Zaev calls early elections too, there is a very remote possibility that the entire Prespa Agreement could be imperilled. Even if such a scenario does not materialize, the EU’s foot dragging and perceived political recklessness with the region mean its credibility will be dealt a blow.

The European Commission’s report on Serbia was far more critical than in previous years. It emphasized the opposition’s ongoing boycott of parliament, which began in February. Major opposition parties have said that they will not return to parliament until the country has a free media and can hold free and fair elections. President Aleksandar Vucic’s inability to persuade the opposition to return to parliament for nearly six months has frustrated European leaders. It demonstrates that Vucic is no longer in control of one of the major institutions of government, rendering parliamentary sessions essentially useless.

A few weeks ago, a special session on Kosovo was called in parliament – the first such session in six years. Vucic said what his increasingly frustrated backers in the EU wanted to hear: that Kosovo was lost, that compromise meant victory, not defeat. But with the opposition boycott, it amounted to little more than political theatre for a foreign audience. To bring the opposition back to parliament, Vucic will be inclined to use all means at his disposal, including political blackmail. Meanwhile, he will likely continue playing the Kosovo card with European leaders, dangling the possibility of an imminent solution, or fearmongering about unrest that only he can control, for as long as it keeps him in power.

Rule of law vs spheres of influence

In neighbouring Montenegro, not much looks poised to change. The same man, Milo Djukanovic, has been in power for 30 years. The European Commission’s report highlighted the country’s glaring rule of law issues. Djukanovic long ago learned to convince his Western partners that they should overlook these problems and offer Montenegro membership in various institutions to prevent other foreign actors, especially Russia, from gaining a stronger foothold in the country. How long this message will continue to resonate with the EU, and at what expense, remains to be seen.

The outcome of the European elections will likely mean more of the same for the Balkans. One celebrated takeaway from the elections was high voter turnout. But high turnout does not necessarily mean greater European unity. Voters supported parties representing radically divergent visions for the future of the EU. And as long as EU member states remain divided on enlargement, the EU’s internal disunity will keep the Western Balkans in limbo.

Next up in the series of evaluations are UK, Estonia and Latvia.

To read more on EU member countries’ popular sentiment and domestic political reactions to the EP elections, and to explore and compare big data on their their development of the past two decades, check out our visual project ‘Mood of the Union: Facts and Figures.’