‘Theory should not be more coherent than the society to which it applies. It must not refrain from integrating the transitional, the unclear, the indeterminate into a theory of society.’1 This observation, by the sociologist Dirk Baecker, sums up an assumption that has shaped governmental thinking since 9/11 at the latest: that the world, which was supposed to have become predictable, and in the process structured like a computer programme, today evinces a degree of unpredictability; and that the future, which once seemed predictable, has become uncertain and incoherent. Uncertainty and incoherence, which for some may seem a mere accident or the troubling by-product of a computable world,2 have become an important element of computerized governmentality. The management of chaotic crowds, an increasing phenomenon in times of climate-related disasters or war, is symptomatic of this.

Large-scale protests are training camps for computerized crowd management techniques that seek to make uncertainty productive. During the G20 summit in Hamburg in 2017, the numbers of police officers in attendance rose like a thermometer: 15,000, 20,000, 23,000 – in the end, over 31,000 were reported. The figures illustrated to great effect a calculated crisis scenario and the capabilities of the police, which had forecast the biggest and toughest intervention of recent times. A container prison settlement complete with court for rapid convictions was set up on the outskirts of the city, and the ‘entire equipment’ of the German police was put in place: drones, water cannons and above all helicopters, which for weeks before the summit, as well as during it, had hovered over the city, often deafeningly loudly, in order to represent the omnipresence of the militarized police. 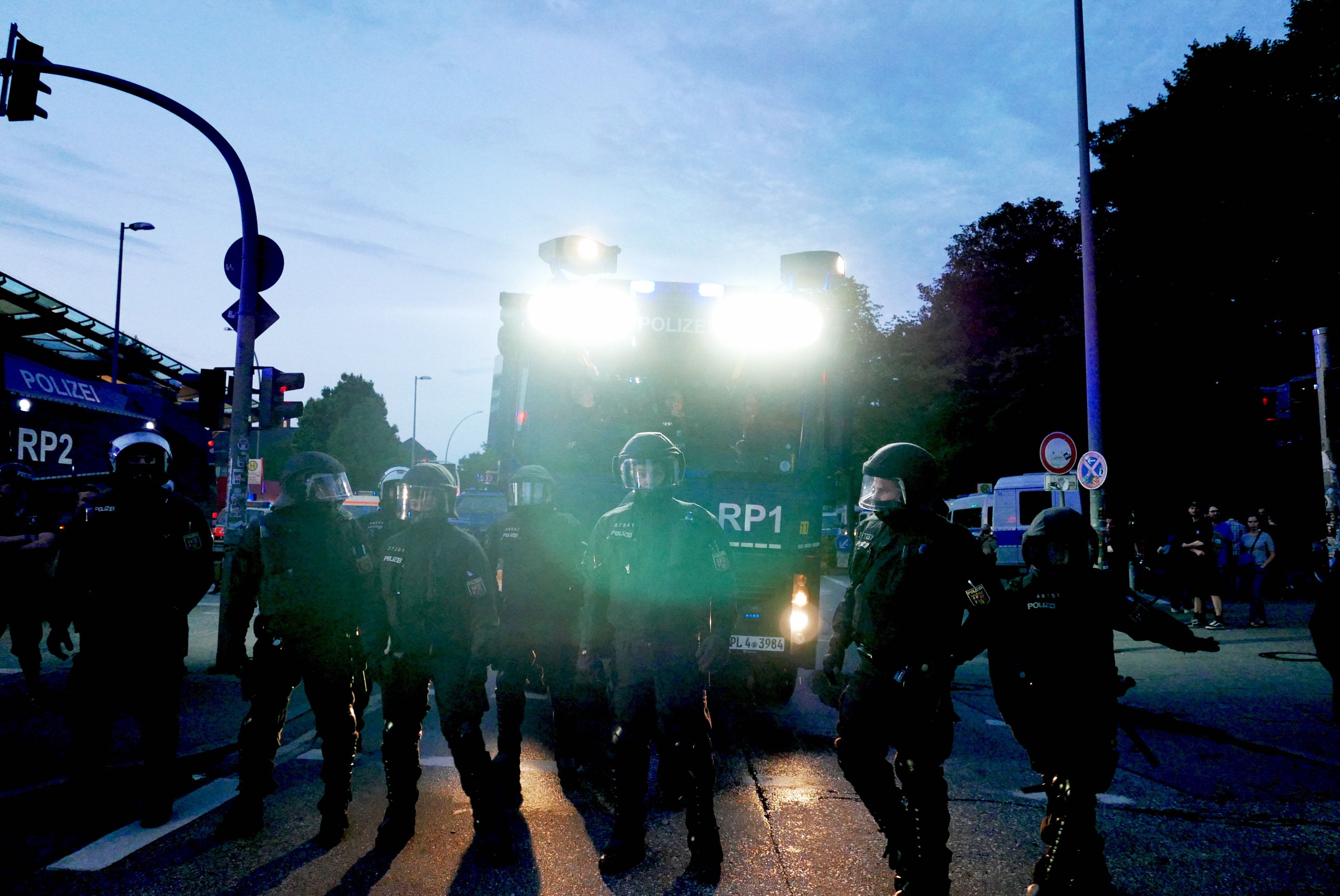 In this context, the helicopter can be understood as a minimal systemic intervention. Or, more to the point, as something that in the 1990s cyberneticist James Wilk first characterized as a ‘nudge’.3 A nudge sets a psycho-political standard that modifies the environment in order to trigger automatic cognitive processes. Human behaviours change and articulate varying tendencies, thereby becoming predictable and controllable. Conceptualized thus, the helicopter supplements protocols in programmed environments that in turn create stages on which ‘several actors can meet, not only to define the … dimensions of the stage, but also their slant, so that those who act on it tend in one direction rather than another, seemingly of their own volition.’4

Understood such, the helicopters deployed in the police operation during the G20 summit became the central instrument of a police strategy of pre-emption. This is not the same as the strategy of prevention, which seeks to forestall unwelcome behaviour; and it is also different from ‘predictive policing’, which anticipates crime in order to prevent it. Instead, pre-emption postulates that while threats are not entirely preventable, they are calculable to a degree. In order to make them more calculable, the threat scenario is actively generated, rather than allowed to unfold autonomously, so that the rules of the game can be stipulated and the situation controlled. Pre-emption is therefore a power technique in which control and repression emerge from the future, as it were. Future scenarios calculated on the basis of machine intelligence establish a framework for action intended to influence the present.

Violence from the future

The strategy of pre-emption was developed by thinktanks around George W. Bush after 9/11 and initially focused on the seemingly limitless field of terrorism. Later, pre-emption was put into action during natural disasters and demonstrations, such as the Toronto G20 Summit in 20105 and Hurricane Sandy in 2012. Although there is no hard evidence, there are a number of indications for its deployment during the Hamburg G20 summit too. First, no efforts were made to prevent the rioting; on the contrary, legal modifications and political propaganda set the scene for escalation ahead of the summit. Sociologist Elke Stevens commented on the generative momentum of such strategy: ‘If you criminalize each and every protest, then in the final analysis you contribute to an escalation.’6 Second, there was no sign of any prior attempts to protect the city and its residents. Police records show that police protection was only foreseen for the summit’s high-ranking official guests.7

With the state’s monopoly of power, it was possible to test and demonstrate not only crowd management procedures, partly under conditions resembling civil war, but also to reclaim the city from ‘hostile elements’, both symbolically and literally – an echo of the post-Hurricane Katrina campaign in 2005, which focused on ‘taking back the city from insurgents’.8 At that time, the city was New Orleans and the ‘insurgents’ were Afro-Americans. In Hamburg, they were the political left.

The logic of cybernetics plays a central role in the strategy of preemption. Its claim is to make large systems manageable, on the basis of computation. Cybernetics developed from the end of World War II and has taken on a new lease of life in the era of digitization. The data needed to calculate governmental management options are now generated, collected, retained and processed in the necessary volumes. The crowds that gathered in Hamburg during the G20 Summit are likely to have been used to produce considerable amounts of data – trackable devices like cell phones and digital cameras belong to protest equipment as a matter of course.

Cybernetic control fantasies were faced with a particular challenge in Hamburg. Those involved in strategic planning knew that anyone on the streets during the G20 summit would be involved in some way. There could be no uninvolved parties. Amongst the mass of protesters, individual profiles became indistinguishable. This represented a problem for the police. People in the streets were repeatedly ordered to give up their anonymity (the appeals ranged from ‘those not involved in the demo must separate themselves from the demonstrators’ and ‘peaceful bystanders must move away from trouble-makers’ to ‘hooded activists must discard their disguises’). But police actions also revealed another approach. Establishing individual identifiability was secondary to the effort to fragment the masses. Police manoeuvres aimed to dissolve group solidarity, so that everyone became indistinguishable in their isolation. The omnipresent helicopters played an important supporting role, in keeping with the military dictum that ‘whoever controls the air, generally controls the surface’.9

In Hamburg, control of the air meant two things: first, helicopters (which industry likes to refer to as ‘force multipliers’) expanded the network of stationary and mobile data collectors by acting as flying nodes of the urban code/space, while also complementing the drone and satellite grid with manned air modules that could be used for automated calculations and for giving instructions to ground forces. Second, the nerve-wracking rotor noise gripped the entire city in an all-enveloping info-smog; everyone within its sphere became part of a ‘riot without a narrative’ – that is, without a meaningful context, as previously seen at the G8 Summit in Genoa.10 The observation that ‘air power obliterates any useful distinction between suspect and bystander, target and non-target’11 was confirmed.

This physically and psychologically warped situation generated a condition in which interaction was made indistinguishable. This also became evident on the eve of the summit, at the ‘Welcome to Hell’ demo. After being ordered to assemble, the demo remained stationary for over an hour. At its front was a narrow street, Hafenstrasse, flanked by high walls, with a large array of water cannons blocking the way; at the far end was the fish market, with crowds crammed together into an extremely confined space, the river Elbe forming a dangerous abyss behind them. On the pretext that not enough people had obeyed the order to remove their disguise, the police repeatedly stormed, in exaggeratedly martial fashion, the front and rear blocs of the demo, which included wheelchair users. Through the partly unlawful use of riot units, CS gas, grenade pistols, rubber bullets, pepper spray, truncheons, water cannons and helicopters, a shocking scene of excessive violence was unleashed from nowhere. This changed a static situation into chaotic movements that were later interpreted as a foreshadowing of the highest escalation level, which was then reached the following evening by the Special Task Force’s ‘counter-insurgency combat’.

The crowd veered between impotence and resistance, causing the degree of indistinguishability to continually fluctuate. While the pre-emptive thrusts may have caused some people to turn violent, interaction was not so much de-anonymised as modulated. The fluid boundaries between passers-by, onlookers and demonstrators were constantly redrawn. The impression arose that the police were not trying to identify the ‘G20 criminals’12 before they were able to commit a crime, but that they were steering the movements of the masses; in other words, that the intervention was not so much about the removal of anonymity as about the formation and shaping of anonymity, on conditions determined by the police. It was not the profiles of individuals that were the focus, but the movement profile of a fluid crowd.

This demonstrated the high price to be paid for pre-emption and its promise to make the unpredictable predictable and the uncertain and incoherent calculable. Later, many commentators remarked that during the ‘Welcome to Hell’ demo, the police had risked fatalities with their intervention. After the summit, the overall assessment was that the security of the people of Hamburg and all those gathered in the city – not to mention private property and public infrastructure – had been endangered.

Preparations for the summit in the preceding weeks had placed everyone in the city under general suspicion.13 The city became a trap: subtle, partly cryptic and partly opaque legal amendments, among other things concerning the right to demonstrate, favoured arbitrary police action and left most of those assembled in Hamburg unclear about their rights. The result was an imperceptibly imbalanced public scenario, the conscious – and most often unconscious – ‘non-acceptance’ of which ‘could be punished as [illegal] resistance’.14

The deafening hovering of the police helicopters created an aural backdrop against which the new extra-legal space appeared as an all-encompassing environment – not quite distinct and tangible, yet nevertheless omnipresent. The consequence was political and psychological confusion: who could form a ‘we’ – in other words, a collective political entity? The indistinguishability of crowds allow for all manner of answers. But what if war is declared on the material infrastructure that allows subject and object to enter into a relationship? What if war is declared on the very conditions for meaningful interaction? Does this not also attack the basis of the political, in other words where political subjectivities meet and, in doing so, first develop as such? What happens if we encounter a set of conditions that, in the spirit of pre-emptive governmentality, exploit the indistinguishability of interaction in order to control the fluid and malleable masses? Does not such crowd management aid and abet the pre-emption of politics?

James Bridle bases his book on this wrong assumption. Cf. James Bridle, New Dark Age: Technology and the End of the Future. London 2018.