Post-revolutionary Ukrainian society displays a unique mix of hope, enthusiasm, social creativity, collective trauma of war, radicalism and disillusionment. With the Maidan becoming history, the focal point ‘Ukraine in European Dialogue’ explores the new challenges facing the young democracy, its place in Europe, and the lessons it might offer for the future of the European project.

This focal point stems from the project ‘Ukraine in European Dialogue’ at the Institute for Human Sciences (IWM) in Vienna. The focal point is edited by Katherine Younger at the IWM. From 2016 to 2018 it was edited by Tatiana Zhurzhenko. Further texts have been contributed by journals in the Eurozine network. 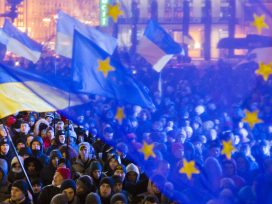 Seven consequences of the Dutch referendum

A majority of almost two-thirds opposed the Association Agreement between the European Union and Ukraine in a referendum in the Netherlands on 6 April. As the public debate surrounding the referendum gained pace, the Ukrainian independent TV channel Hromadske became an important forum for associated discussion. Now that the results are in, Hromadske journalist Volodymyr Yermolenko assesses the implications for EU-Ukraine relations, and European politics in general.

It seems that, subsequent to the “hybrid war” between Ukraine and Russia, reconciliation efforts have ensued – but only at first glance. In fact, what we witness is a continuation of war by other means, writes Tatiana Zhurzhenko. Mapping the growing alienation between the two nations, she asks: under what conditions is dialogue possible?

Self-reflection through the visual

Notes on some Maidan documentaries

Today, the Maidan revolution lives on in a wealth of documentary films about the events of 2013-14 in Ukraine. Yustyna Kravchuk compares and contrasts the approaches of the films’ creators, and the implications of these for the articulation of collective political desires.

Yes to security in Europe

Russia has adopted an open policy of dividing the European Union and undermining the security of its members, of which the Dutch referendum questioning the Association Agreement with Ukraine is simply a small part. So says Timothy Snyder in a succinct account of the background to the 6 April referendum.

Between old legacies and a new social contract

With president Petro Poroshenko and prime minister Arseniy Yatseniuk having lost their image as radical reformers of late, Iryna Solonenko says it is up to Ukraine’s new reform-minded actors in both government and civil society to secure a new social contract. However, the challenges they face are formidable, as the legacies of previous regimes persist and resistance to change among the old guard remains fierce.

Back to the future in Ukraine

The Maidan protests have given Ukraine a chance to stop and look at its future, and plan it the way she wanted to, writes Kateryna Botanova. Now it’s becoming apparent how to make the revolutionary shift from continual fighting, distrust and questioning of legitimacy to mutual support, collaboration and growth.

Post-Soviet science fiction and the war in Ukraine

Today’s mass-produced Russian science fiction is brimming with motifs of imperial revenge, the “rewriting of history” and a cult of military aggression. Moreover, writes Konstantin Skorkin, the imperial visions of science fiction authors have turned into a guide to action.

A church caught between?

When Pope Francis and Patriarch Kirill met in Havana, for one part of the Catholic Church the past seemed to be repeating itself, writes Katherine Younger. In the nineteenth century, the Ukrainian Greek Catholic Church found itself in the middle of both diplomatic negotiations and ideological clashes between the Vatican and Russia – and it is again today.

From peninsula to island

Though Russia’s annexation of Crimea in March 2014 moved at breakneck pace, it followed a long anti-Ukrainian propaganda campaign. Ekaterina Sergatskova, a former Russian journalist who lived in Crimea for some years before moving to Kyiv, describes the growing mutual alienation between the inhabitants of the peninsula and mainland Ukraine.

A litmus test for post-Maidan democracy

The political discourse on LGBT rights has shifted in Ukraine after the Maidan and as a result of the conflict with Russia, which aggressively promotes “traditional values”. However, writes Maria Teteriuk, the efficacy of recent legal reform concerning LGBT rights, introduced as part of the visa-free deal with the EU, remains to be seen.

Patterns of illiberalism in central Europe

A conversation with Anton Shekhovtsov

Poland’s turn to the right has refocused attention on the roots of the region’s illiberal democracies. Anton Shekhovtsov considers the implications of these developments for Europe as a whole.

From Euromaidan to euroscepticism

Ukraine’s Revolution of Dignity was triggered by the government’s decision to postpone signing the long-awaited Association Agreement with the European Union. Protesters on Kyiv’s streets chanted “Ukraine is Europe!”, and waved EU and Ukrainian flags side-by-side. Two years after the victory of the Maidan protests, what is left of this pro-European idealism? Ukrainian journalist and essayist Mikhail Dubinyansky takes stock.

Diaries and memoirs of the Maidan

In these impressions of the Maidan protests collected by Timothy Snyder and Tatiana Zhurzhenko, one hears the voices of those who witnessed history in the making. The role of civil society and the Russian-speaking middle class, as well as individual existential decisions, also come to the fore.