In recent years, issues of solidarity have dominated political debates on both sides of the Atlantic. In the aftermath of the 2008 financial crisis, questions of inequality and solidarity have become intertwined – especially in countries that have implemented severe austerity measures. Over the past year, however, questions of both national and international solidarity have also been central in connection to the treatment of refugees and migrants. These ‘crises’ have led to polarization, but also to an increase in grass-roots mobilization to express discontent with national governments and/or EU policies, as well as to create alternative forms of community support within European societies and beyond.

This Focal Point is based on panel discussions held at the 27th European Meeting of Cultural Journals / 10th Conference on Solidarity in Gdańsk, 4-6 November 2016.

The conference was organized jointly by Eurozine, the Institute for Human Sciences in Vienna, the European Solidarity Centre in Gdańsk and Res Publica Foundation.

In partnership with:
Erste Foundation and Mayor of Gdańsk 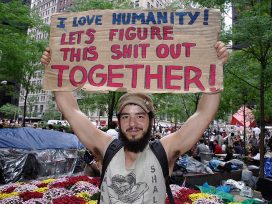 Europe after Brexit and with Trump

Britain’s vote to leave the Union and the advent of a US president who regards the EU as dysfunctional pose a major challenge to the remaining 27 members. Whether the EU continues to decline depends on whether Germany and France can strike a new bargain to strengthen the eurozone after their elections this year.

The enfranchisement of migrants can overcome the democratic deficit, however ethno-nationalism’s xenophobic understanding of the political community requires a political, not a legal solution, argues social anthropologist Shalini Randeria.

Solidarity after Machiavelli: An interview with Ira Katznelson

Solidarity in liberal democracies is pluralistic, argues political scientist Ira Katznelson; it allows particularities of time and place while satisfying a widely held human interest. Democracy, too, takes a variety of forms and is best measured by historical standards.

Liberalism, populism and the challenges of post-transformation in eastern Europe and beyond

The migration crisis has triggered a shift in politics away from an ethics of ultimate ends to an ethic of responsibility, the question of the ‘we’ to whom we owe solidarity reappearing in pre-political concepts like ethnicity and national culture.

The limits of solidarity

The success of Germany’s anti-immigrant party signals a mood-swing in public debate on the refugee crisis. The solidarity expressed by Angela Merkel’s ‘We can manage’ has given way to something much less generous, writes Daniel Leisegang.

On the borders of solidarity

An ethical perspective on migration

The debate about migration in political and media discourse is dominated by issues of economics and culture, while only the ethical approach reveals the question of power, writes Phillip Cole. The left must on one hand understand anxieties people have about immigration, but on the other show courage in contesting beliefs based on untruths.

The crisis of neoliberalism in Europe

Europe has abandoned norms of equality and social solidarity in favour of market freedoms, writes Michael Rustin. A founding editor of Soundings (UK), Rustin considers the damage, disruption and antagonism caused by the neoliberal doctrines that dominate life in the European Union, and whether such trends are reversible following the outcome of the UK referendum.

Utopian dreams beyond the border

If the financial crisis divided the EU between creditors and debtors, opening a gap between North and South, the refugee crisis re-opened the gap between East and West. What we witness today, writes Ivan Krastev, is not what Brussels describes as a lack of solidarity, but a clash of solidarities: national, ethnic and religious solidarity chafing against our obligations as human beings.

The politics of nature in the Anthropocene

In dialogue with Dipesh Chakrabarty, Kathleen McAfee considers the grounds on which a politics of broader solidarity can and must emerge in the face of an unprecedented ecological turning point; a turning point that is simultaneously a crisis of subsistence for billions of people, albeit to different degrees and in different ways.

Strangers when we meet: Identity and solidarity

The urgency of global challenges such as climate change and the need for collective action might be expected to reduce the importance of identity politics and questions of difference. Yet it remains the case that there is no neutral conception of humanity for us all to belong to. Roshi Naidoo considers the options for fashioning new languages of solidarity.

Refugees and new divisions in Europe

Hannah Arendt once remarked that the rights of man proved to be unenforceable in postwar Europe. Currently, observes Valeria Korablyova, the refugee crisis looks like proving the idea of Europe itself to be unenforceable. So what will remain if equality and solidarity finally fail to become the principles of cooperation between EU member states now riven by common fears?

He and his family fled Iraq for Poland in the 1970s, never to return. Basil Kerski knows from firsthand experience that integration can be a long and difficult process, but it usually enriches receiving societies and new arrivals alike. As further migrations and intercultural encounters undoubtedly await Europe, Kerski argues in favour of European solidarity.

Europe as a republic

The story of Europe in the twenty-first century

Without equality and fraternity, freedom brings enslavement, writes Krzysztof Czyzewski. And overcoming the ego-centric tendencies that shape contemporary culture remains the central challenge of our times: the search for a culture of solidarity continues.

As the culture and the institutions of the Gutenberg Galaxy wane, Felix Stalder looks to commons, assemblies, swarms and weak networks as a basis for remaking society in a more inclusive and diverse way, which expands autonomy and solidarity at the same time.