Is it accurate historically to apply the term ‘fascism’ to America under Trump? And is to do so strategically astute? A special issue of ‘Public Seminar’ weighs in on the debate over the f-word. With contributions from Jan-Werner Müller, David Bell, Natasha Lennard and more.

When Alexandria Ocasio-Cortez declared on social media last year that the 2020 US presidential race was about ‘stopping fascism in the United States’, the f-word returned with a vengeance to America’s political lexicon. ‘But is it accurate historically to apply the term “fascism” to regimes like America under Trump, but also to the far-right in Europe?’ asks Public Seminar editor James Miller. ‘And is to do so strategically astute, given that the term’s historical associations will necessarily define the political response?’ A special issue of Public Seminar, curated in collaboration with Eurozine, aims to put these recent developments into a much broader context. 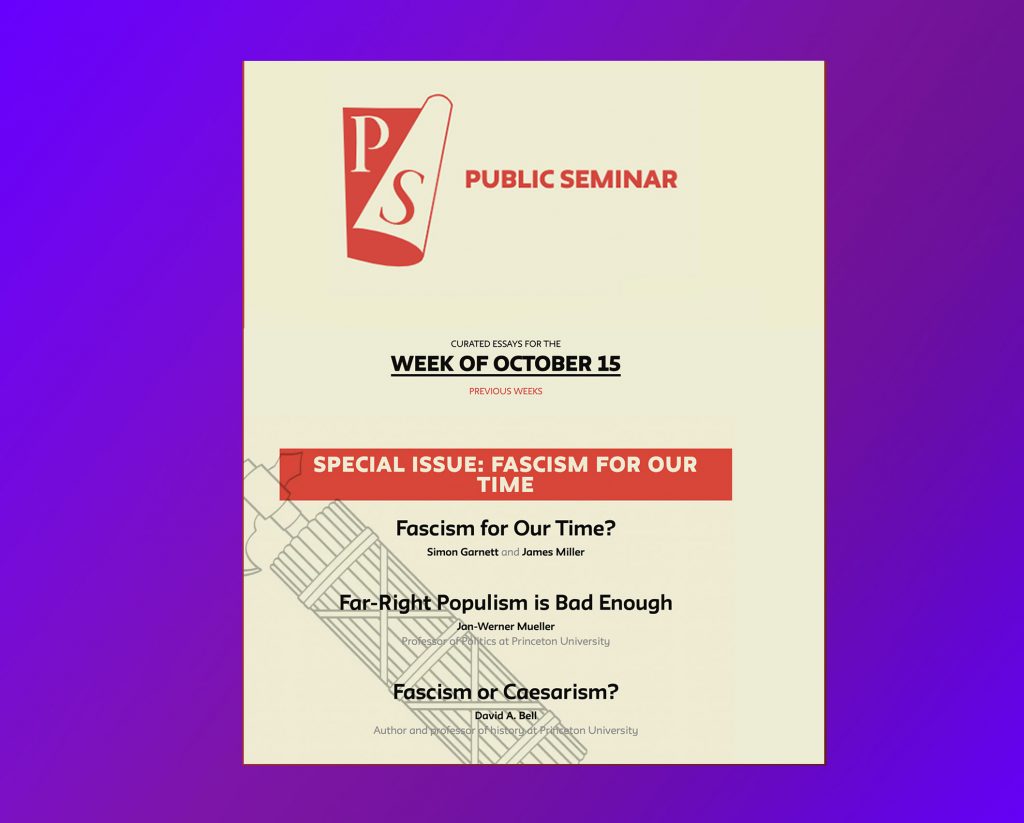 There are various reasons why it is politically expedient to call Trump a fascist, writes Jan-Werner Müller. But ‘as historians of the twentieth-century have long taught us, not every dictatorship was fascist; losing the distinction between revolutionary fascism committed to a mobilization and re-formatting of society as a whole, and relatively static authoritarianism (which can also be violent) is to diminish our capacity for political judgment.’

‘We would be very short-sighted indeed if we saw Donald Trump as the only potential authoritarian on the horizon’, warns David A. Bell. ‘It is possible that, as the country pitches further and further into vicious partisan conflict and political paralysis, the greater the opening will be for a true Caesarist figure who claims to stand above and beyond the parties, and to provide a source of national unity.’

Does ‘counter-violence’ damage the antifascist cause? Or is it delusory to talk about non-violence in the face of an opponent with no such scruples? Natasha Lennard argues that ‘appeals to truth, reason, fairness, etc., will not break through to groups organized toward white supremacist ends, like Identity Evropa, Patriot Prayer, the Proud Boys, and other racist militia movement contingents. Interventions must instead make their lives as difficult as possible.’

Antifa claims to draw on the 20th-century tradition of antifascist resistance, however, is blind to its variety, claims Mitchell Abidor. While the paramilitary antifascist organizations in interwar Germany and Italy were ultimately ineffective, the French Popular Front managed both to repel the fascist threat and instal a government. Its success lay in its ability to form a broad coalition on the left and to reach strata of the population traditionally ignored by Communist parties. This is a lesson that antifa today could do well to learn, according to Abidor. ‘Confrontations between antifa and the far right might feel rewarding in the moment, but they do nothing to deflect America’s current drift toward autocracy, and authoritarianism.’

Mischa Gabowitsch argues that understanding the varieties of Soviet and post-Soviet antifascism can de-parochialize the debate and add to a conversation appropriate to the global challenge of authoritarian ultra-nationalism And Anton Shekhovtsov says that if Trump ist to be compared with anything, then it is with Europe’s rightwing populists. But is factual accuracy even the point when it comes to the discourse of antifascism?

Why street fighting is no way to resist fascism