Slow, indecisive, vulnerable to manipulation: the charges against democracy are familiar. But as contributions to ‘Esprit’ argue, what makes democracy fragile also makes it strong. Including Michaël Fœssel on democracy’s relation to time, and Axel Honneth on the new spirit of participation.

In 1947, Winston Churchill described democracy as the worst form of government, except for all the others. In their introduction to an issue of Esprit on the ‘myth of democratic weakness’, Jonathan Chalier and Michaël Fœssel round up the charges: slow, indecisive, vulnerable to manipulation, weak. Especially during crises, authoritarian disregard for consensus and legality can seem temptingly efficient. But as the contributions to the issue show, what makes democracy fragile also makes it strong: the ability to tolerate criticism, cooperation over coercion, trust over fear, collective debate over individual decisions. 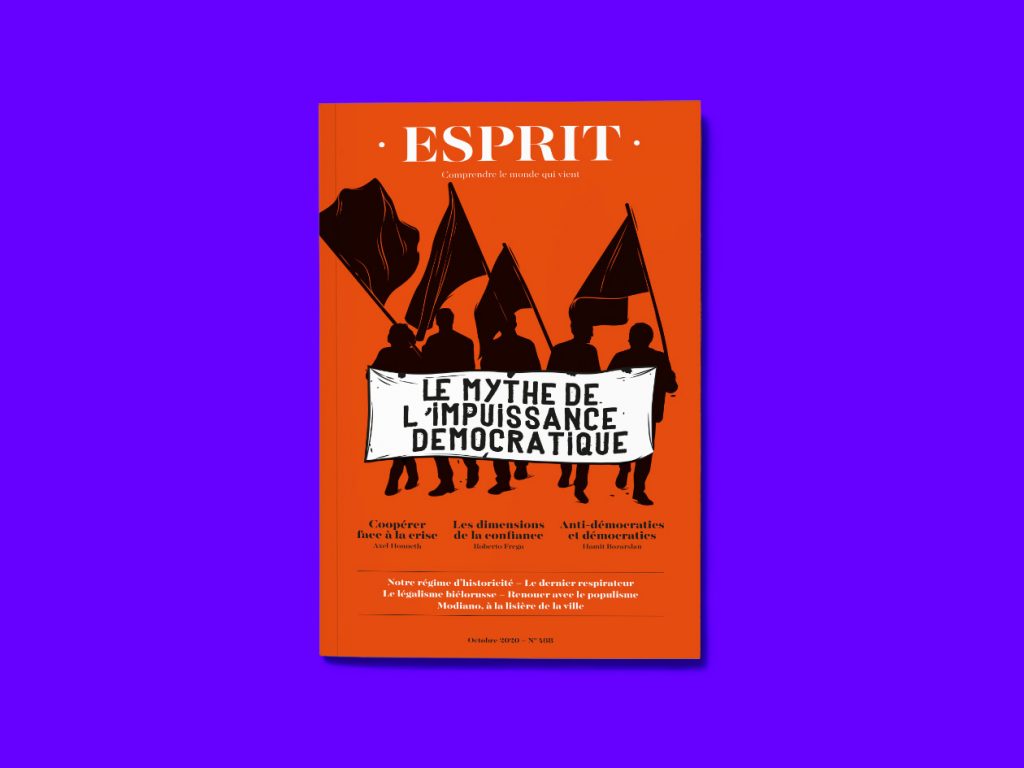 The relationship between democracy and time is complex, writes Michaël Fœssel. If time is seen as external to action, it is easy to conclude that vertical decision-making is most efficient. However, collaboration and debate can transform the coordinates of time. For collapsologists, time is not just a commodity but a burden; the phrase ‘race against time’ has been used frequently during the pandemic. But democracy happens when time is negotiated rather than endured.

Instead of a fixed past on which to build a national myth, history can be endlessly reinterpreted; instead of a defeatist vision of decline, the ability to deliberate enables an alternative future to be chosen. Authoritarianism cannot create consensus, so it relies on fear – but fear prevents collective initiative by presenting time as something unchangeable. The indeterminate time of democracy makes it fragile, but not weak.

Countries that handled the pandemic best tend to fall at either end of the authoritarian–democratic spectrum: China and certain western European countries. Axel Honneth derides the ‘triumphant lamentation of Foucauldian intellectuals’ who see the pandemic as confirmation of the encroachment of state biopower, arguing that the ‘informed majority of the citizens willingly accept small but not catastrophic limitations of civil liberties in order to cooperatively help one other reduce the physical dangers of the virus’.

Honneth acknowledges that ‘the vertical exercise of power has become stronger because of the need for quick and concentrated measures against the crisis’, however is cautiously optimistic that reliance on participation has led to greater social integration, ‘at least in some European countries where citizens had to learn how much they depend on each other’.

In a series of short discussion pieces, Didier Fassin argues that lockdown has demonstrated the principle of biolegitimacy: life takes precedence over everything else, even in prisons. Raphaël Kempf documents increasingly authoritarian tendencies in France since 2001: the pandemic has continued this trend, creating an oxymoronic ‘authoritarian democracy’. Jean-Claude Monod argues that the drift towards oligarchy in many western democracies is not an inherent feature of liberal democracy. Florence Padovani describes daily life in Beijing, where residents are reassured by anti-COVID measures seen as draconian in Europe.

For Nicolas Léger, Italy’s recent success in battling the virus was due to its communal culture, which engendered a strong sense of solidarity and mutual responsibility. Livia Velpry and Pierre A. Vidal-Naquet discuss the democratic aspects of lockdown in terms of how people have adapted to or bent the rules. Nicolas Henckes argues that if health is primarily the capacity to act, the goal should not be to fight the virus but to learn to live with it.