There are various reasons why it is politically expedient to call Trump a fascist, but doing so clouds our judgement about the kind of authoritarianism he represents. Trump’s encouragement of ethnic antagonism is typical of far-right populism globally and will endure in the US beyond his presidency.

From more or less mad Roman emperors to – of course – Adolf Hitler, by now it would seem easier to name historical figures to whom Donald Trump has not been linked than ones whom he has been said to resemble. By the same token, there has been a deluge of articles pointing to prescient thinkers, from Musil to Adorno to Rorty.

Arguably, this evermore outlandish search for analogies and prophetic theories is itself without precedent. It has been enabled by a media environment where attention is scarce but publication space on the web is virtually unlimited, attracting not just pundits but academics subject to the imperative of relentless self-promotion (‘democracy will die, unless you buy my book!’). In a previous era, with not much going on beyond the printed opinion page, editors might not have made it a priority to feature musings about whether ‘Martin Luther was the Donald Trump of 1517’.

At the same time, there have been more serious voices linking Trump with what arguably remains the one concept with the most potential to mobilize alarmed democratic citizens: fascism. 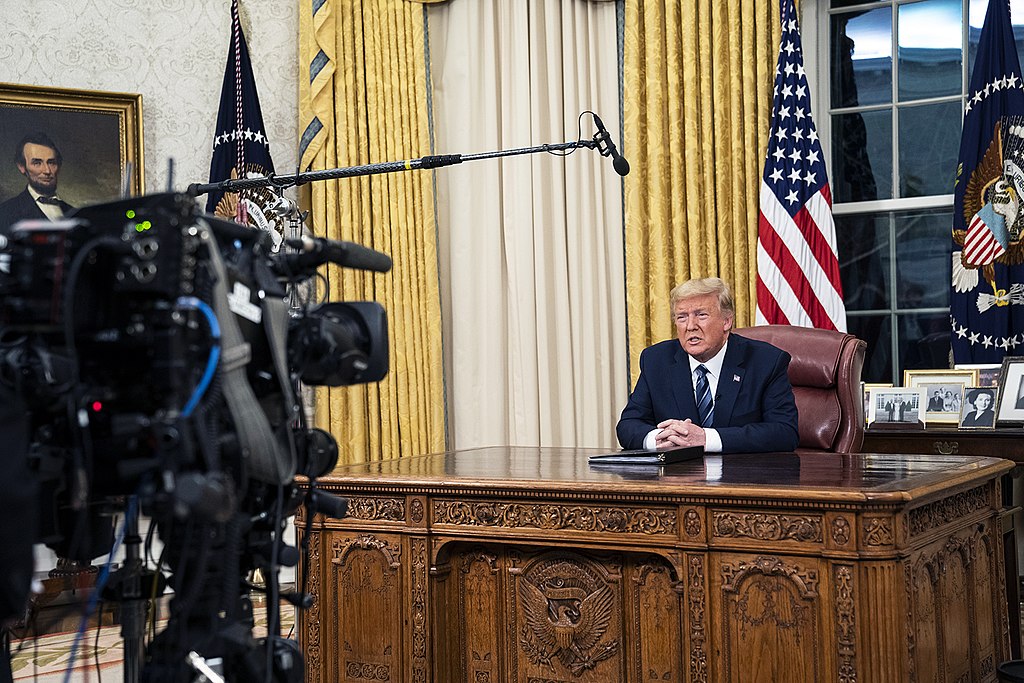 Photo via The White House from Washington, DC / Public domain

It’s not difficult to see why this concept has proven attractive for figures who otherwise share little, if anything. Neoconservatives labeling Trump a fascist can both suggest forming a broad anti-fascist coalition and deflect embarrassing questions about how they themselves might have paved the road to Trump’s victory with reckless military interventions, widespread surveillance, and the justification of torture amidst a ‘war on terror’. The Far Left, seeking a wider indictment of liberal capitalism, can claim that Trump has merely made latent fascist tendencies manifest.

The more serious contributors to the debate have usually conceded that, in 2020, there is no coherent fascist movement in the US and that Trump and his allies have not established anything that plausibly could be called a fascist regime. That’s not the end of the discussion, of course; it would be foolish to start reflecting on fascism only when it’s fully-fledged. But can one meaningfully speak of strong intimations of fascism?

As David Bell points out, it is an implausible stretch to dissociate the concept of fascism from a particular constellation of ideas and institutions: a regimented mass movement, a systematic cult of a leader with unlimited authority, a no-less-systematic cult of violence, and a basic commitment to ‘living dangerously’ and finding life’s meaning in mortal confrontations with enemies. Kampf was and is the keyword of fascism.

More important still for our moment, it’s important to remember that fascism presented itself as a genuine revolution (a point that would probably be conceded even by those who argue with Antonio Gramsci that fascism constituted a ‘passive revolution’ that served to preserve crucial elements of capitalist modernity).

Fascists advanced a systematic idea about how to mobilize as well as profoundly restructure society (in line with notions of racial hierarchies). That is not to say that every manifestation of fascism must feature some kind of more or less coherent system of thought (as is well known: the self-appointed philosophical leaders of fascism, be they Gentile or Rosenberg, were completely sidelined within the regimes; Hermann Göring , a powerful figure in the Nazi Party, proclaimed proudly that he joined because he was a revolutionary, not because of the ideologischer Kram – the ideological stuff. Nor is it to say that a regime will in practice empirically have to make good on the claim of totally dominating a collective of ‘new men’. But without anything resembling such ambitions on the part of influential actors, as opposed to marginal trolls, it’s difficult to see how we can meaningfully speak of fascism. Terms like ‘semi-fascism’, ‘para-fascism’, or ‘fascist tactics’ invoke a family resemblance (and get the surplus shock value of the ‘f-word’), while at the same time hinting that the relatives might be so distant as to have very little to do with each other.

True, Trump himself and plenty of his followers are committed to an ideal (if that’s the right word) of domination. The President and his collaborators have turned politics and administration into a theatre of cruelty (the actions of the Department of Homeland Security are only the most conspicuous). It is also true that Trump and his supporters seek to shore up gender and racial hierarchies. But we have a perfectly good concept for that: authoritarianism, and far-right authoritarianism in particular.

As historians of the twentieth-century have long taught us, not every dictatorship was fascist; losing the distinction between revolutionary fascism committed to a mobilization and re-formatting of society as a whole, and relatively static authoritarianism (which can also be violent) is to diminish our capacity for political judgment.

Not all authoritarianisms have the same public justification. What is particular about Trump – and plenty of other leaders today – is the claim that he, and only he, represents the American people, something that proponents of bureaucratic authoritarianism would never have said. I have suggested in a number of writings that the concept of populism – and authoritarian rightwing populism in particular – can be of help here. (Though, arguably, less so in the American context where, for historical reasons, ‘populism’ is often primarily imagined as bona fide grassroots pressure on oligarchies, as defending Main Street against Wall Street, etc.)

Populism, I submit, is not so much about anti-elitism but anti-pluralism. Populists hold that they, and only they, represent what they often call ‘the real people’. As a consequence, they declare all other contenders for power fundamentally illegitimate. Instead of arguing over policies and values, as happens in a healthy liberal democracy, populists simply malign their rivals as traitors, politicians who are corrupt, or ‘crooked’. Less obviously, they insinuate incessantly that those among the people who do not share their particular symbolic conception of popular sovereignty do not properly belong to the people at all.

Rightwing authoritarian populists in particular reduce all political questions to questions of belonging: Trump does not answer his critics with arguments, but condemns them as un-American or instructs them to return to the foreign ‘shitholes’ from whence they allegedly came. Ohio Republican Congressman and Trump lackey Jim Jordan, in a more sanitized version, tweets, ‘Americans love America. They don’t want their neighborhoods turning into San Francisco.’

This has consequences. Populist talk results in what Kate Manne calls ‘trickle-down aggression’. During Trump’s presidency, the number of hate crimes in the United States rose dramatically. Many Republicans are now ready to ‘take the law into their own hands’ to defend the country against the threat supposedly posed by those who appear to them as un-American American citizens (not to speak of the undocumented).

Those sceptical of the applicability of fascism don’t have to be committed to some notion of American exceptionalism — as in, ‘It could never happen here.’ On the contrary: what is so striking is precisely the family resemblances between what I would call a ‘populist art of governance’ in various countries, from the US and Turkey to Brazil and India, not to mention Hungary and Poland, the European pioneers of far-right populism in power. These similarities do not prove that far-right populism everywhere has the same cause (tempting, and comforting, as it can be to pinpoint one universal macro-cause, such as the ‘resentment of the losers of globalization’); rather, it shows that the populist art of governance can be appropriated across borders and that the relevant actors are busy learning from each other. Certain best – or rather, worst – practices of ‘autocratic legalism’ (e.g. legitimate-sounding laws against ‘foreign agents’ designed to harass non-governmental organizations) can travel.

None of this should be taken as a reason to be less concerned, let alone to ease up in the fight for democracy. Far-right populism really does destroy democracy, as is evident in Hungary. It can also always radicalize further in its racism. Even those who somehow don’t feel bothered by all the unsavoury stuff right now might eventually suffer the consequences. In the fall of 2017, Trump gave a preview of his carelessness and cruelty during the pandemic when he frivolously tossed paper rolls at the inhabitants of a Puerto Rico devastated by hurricane Maria. (Another instance, one might say, of the ‘boomerang effect’ discussed by Hannah Arendt and Aimé Césaire: whatever is tried out in the colonies on non-citizens or second-class citizens eventually hits the metropolis).

For now, far-right militias fortunately remain marginal in the U.S. But the ‘ethnic antagonism’ – the fear that black and brown people will destroy white Christian America – keeps being stoked not just by Trump but by plenty of more polite-sounding people in the GOP. Such fear can pave the way for something much worse than the nightmare the US has been living in over the past four years. Of course, as the Black Lives Matter movement has rightly insisted, it was a nightmare for many people even before Trump; and it and may well continue to be one in a post-Trump era, when everyone might simply congratulate themselves on a return to American normality.

The challenge is to do justice to two thoughts simultaneously: the authoritarian populist threat is real; but to rescue democracy, we must at the same time profoundly transform it.