A first-hand account of the COVID-19 losses from Bergamo, Italy

Not only the infected are in danger, hospitals don’t have capacity to deal with other emergencies either. Caskets are piling up as the cemetery cannot keep up with the number of deaths every day. From social workers to friars to cleaning staff, everyone who serves the sick are at risk at the epicentre of the contagion in Bergamo province.

I live in the epicentre of the contagion, a few kilometres from Alzano’s hospital, the heart of this disaster for Bergamo province. According to major of Bergamo, Giorgio Gori, there are way more deaths than the official counts, because not everyone who recently died had been swab-tested. Indeed, already on March 8, city hospitals started having issues admitting those in need, therefore some have to stay home and cure the disease on their own as long as they can. There are so many dead that the Bergamo crematorium cannot handle the pressure, and they run out of urns. The father of a friend of mine died 13 March and the cremation is planned for 23 March. Today it takes 10 days or more to cremate a deceased, with the crematorium working non-stop. Caskets stay in the houses for days because funeral parlours and the cemetery are at their limit. At the Bergamo graveyard, caskets are stockpiling and are all over the place.

In the last five days, more people have died than usually die in weeks. In Nembro, a city of little more than eleven thousand residents, 90 people have died in the last twenty days. The local retirement home is emptying out strikingly fast. In the valley some of the towns’ churches’ bells do not toll for the dead anymore, otherwise, they would have to do so without interruption. Bells toll once a day, sort as a forfeit, for the dead of the previous day. Many die not of the virus but because doctors cannot handle emergencies anymore. If you have a heart attack here, today, you have to wait, even if you have no time. Those who die, do not get a proper funeral.

Bergamo has become the ‘entrance’ to Italy, thanks to an airport that, with low-cost flights, brings a huge amount of tourists, a magnitude of mobility one couldn’t have even imagined a few years ago. It produces euro millions in revenue for satellite activities and creates millions of contacts. After the 2007/08 crisis, this airport sustained the touristic boom for Bergamo. 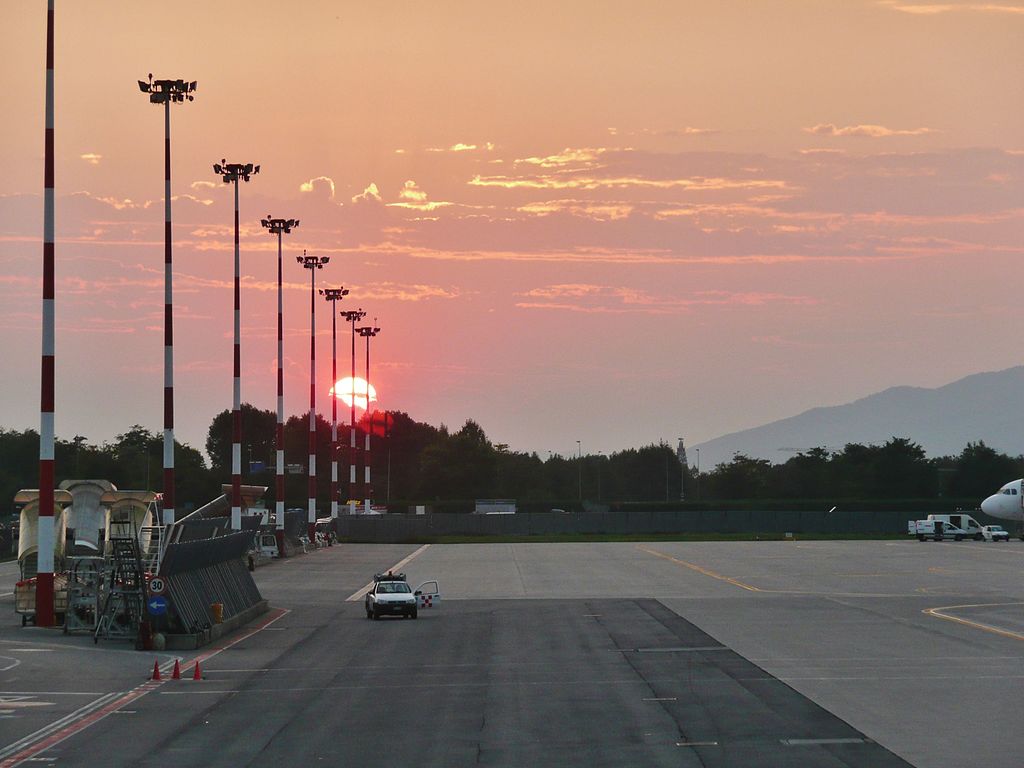 Sun sets on the Bergamo Airport, Italy. Photo from 2008 by qwesy qwesy from Wikimedia Commons.

Seriana valley, the wider area of Bergamo is not only densely populated but also one of the most productive areas in Europe, so much so that the lockdown was unthinkable for fears of an economic disaster. Alzano’s major Bertocchi said already in early March that a red area will cause immeasurable damages. There are hundreds of factories in this valley, employing people from all over the province. The train to the valley stops about ten times between Albino, Nembro, Alzano (the cities at the heart of this disaster), with thousands of students and workers riding daily. Up until very recently, the train must have heavily contributed to the spread of the contagion. It is an ‘aging valley’, much like the province in general, with more elderly than the national average, in part due to the regional economy.

Many over 65 do not think of themselves as seniors, and hence vulnerable; probably because until twenty days ago many of them were supporting themselves and their families as well. Many are retired homeowners who watch the grandnephews, help their children in times of need, run errands for them, hoping to buy them a house with their life savings. They are healthy, thanks to the best healthcare system of the area. They are ‘youthful’: they hike in the mountains, go to the seaside, living capable lives.

Now their reality turned upside down: above the age of 65 they can be quickly nailed to bed with high temperature for 8-10 days, sometimes attached to a ventilator, and in some cases they go straight to the cemetery, queueing up at the crematorium. Many of the elderly, however, cannot fathom this. They are in the streets, more than young people, even now, despite the daily losses.

In the last few days ambulance runs have decreased, they cannot pick up patients that the hospital cannot accept any more of them. Most residents of the province count two or more deaths a day in friends or family circles. The psychological impact is devastating.

Doctors and nurses risk their lives on the service. Last Sunday saw the first deceased first responder. The following day, an obstetrician aged 58 died in Alzano, after taking care of her mother, killed by the coronavirus as well. It is not only the medical and nursing personnel to be exhausted and staggering. It’s getting worse for low-income professionals like educators and social workers too.

Some friars of Patronato San Vincenzo, servicing the homeless around the train station, have tested positive. Cleaning personnel are also at risk, many of them immigrants, at the forefront in clinics, hospitals and nursing homes, employed by unions. And yet, they keep up the work, either because they have to or because they treat it as public service.

A Bosnian resident of the area, now in his seventies, was in Sarajevo during the siege, assisting an Imam, washing the dead before taking them outside the city. Later he moved to Bergamo with his family. He said the only experience close to the Sarajevo siege is Bergamo today, with its constant sirens, citizens locked up at home, medical personnel on the edge of breakdown, and the dead that piling up. Of course, there is no bombing here.

March on Rome under scrutiny

Giorgia Meloni could become Italy’s first female prime minister. Her political rise is no isolated case: ‘femonationalism’ is flourishing throughout Europe, disguising extremes as the next socially acceptable, mainstream choice.