Beware the magic of metrics

Coronavirus further intensified the fetishization of science. Experts are being cast as saviours; orderly lines of masked marketgoers mimic religious processions, and daily press conferences function as mass. But metrics have to be relieved from spiritual obligations.

We are witnessing the return of the uncanny. Its German cousin, das Unheimliche, is an even better description of the predicament we currently confront. We do not recognize our home, our Heimat, anymore. More importantly, we can no longer control it. In a Heideggerian twist, the world, as our tool, is no longer readily available to us.

As others have pointed out already, the uncanny invites a return to magical thinking. But not only are we performing exorcisms, and expecting some to die for the greater good, science itself is becoming fetishized as the Dr. Faucis and Dr. Drostens of the world are being cast as modern-day saviours. The daily press conferences of national leaders and crisis boards have taken the place of mass; orderly lines of masked marketgoers mimic the role of religious processions.

Prophecies are no longer proclaimed from the mountaintop but from the metrics. But metrics are not just numbers. Metrics are the numbers that matter. Numbers are empirical, metrics are normative. They are the magic that turns numbers into meanings. But for the magic of metrics to work we need to believe in them.

Anthropologists have long known that religion, magic and science have some things in common. They each require some deference to authority, they each use specific tools and substances to do their work, they each promise meaning and results. But the differences between them are crucial, too. Religion tells us how the world works, what the great powers are, why human suffering exists, all in general terms. Magic is for individuals and tells them how to solve a specific problem in their individual lives. It is a bespoke religion. Science, the third member of this triptych, emerges when religion is replaced by empirical techniques of measurement, testing and verification. Science thus has a natural affinity with magic, for both rely on concrete, often material, tools and techniques.

Metrics are both magic and technology. And we do use them both ways. Worldometer, a website dedicated to global statistics, became the 28th most-trafficked website worldwide in April 2020, a mindboggling 36,928% increase from April 2019. We read case numbers, death numbers, numbers of critical cases and recoveries like scripture. But few numbers make sense in isolation. What should we really make of the fact that there were these many deaths today as opposed to yesterday? 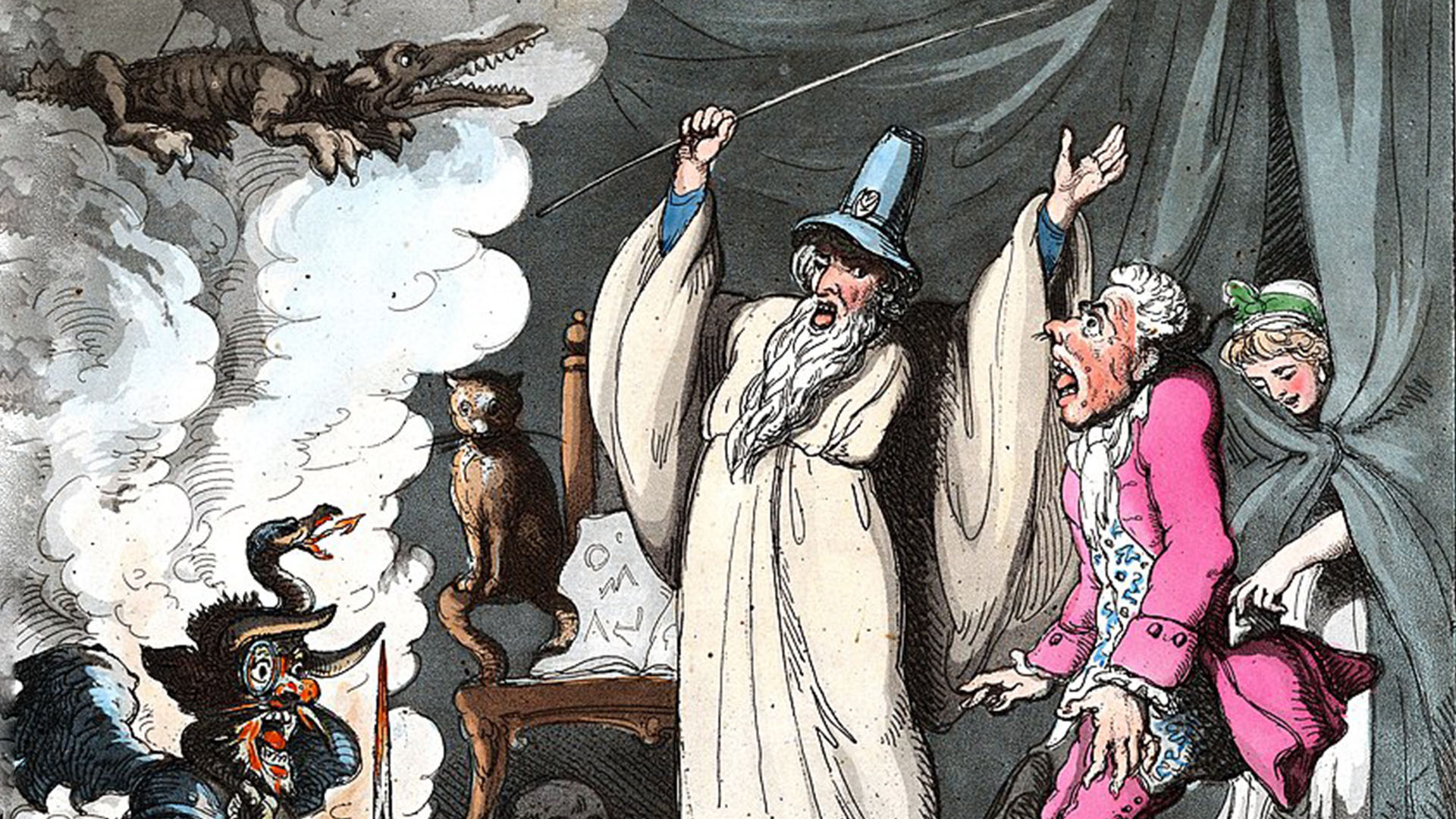 Humbugging, or Raising the Devil (Thomas Rowlandson, 1800), depicting the public as a credulous simpleton being distracted by a display of ‘the miraculous,’ Photo via Flickr from Wikimedia Commons Thomas Rowlandson / Public domain

And yet there is a strange sense of satisfaction to be derived from mindlessly checking numbers regardless. What already feels bad, actually is bad. The numbers tell us as much. Alternatively, if we want to tell a different story, the numbers can simply be rearranged. Therein lies the beauty in numbers. We can reshuffle them, like a deck of cards, until they tell us what we want to hear. Metrics, which are a way to measure the significance of numbers, are what make this shuffling possible.

Metrics, and the numbers on which they are based, provide a sense of order when reality no longer fits a familiar frame. They are a way for quantity to control the ambiguities of quality. We are reminded of the famous anthropologist Mary Douglas’s definition of ‘dirt as matter out of place.’ The virus is also matter out of place, even more so in its racialized description as a ‘foreign’ body from a foreign land, threatening our bodies and our lands. Checking case numbers and charting the curve not only helps us put the virus back into its place epidemiologically, but also epistemologically: what we can measure we feel we understand.

This is not to suggest that the numbers have no meaning. But it is to suggest that numbers rarely speak for themselves. Numbers need narratives. They can also be silenced. Metrics are the means by which we measure the success and failure of numbers. This raises the question of who controls and contextualizes them.

We first learned to rely on metrics through our participation in the market economy. Metrics not only measure performance but also progress over time. We buy stocks, take out mortgages, shift debt from one credit card to another, get second mortgages by leveraging original mortgages, all in the hope that, even though all evidence points to the contrary, our investments will pay off eventually. Even as we become victims of numbers, frequently hit by rising interest rates, falling wages, ballooning mortgage payments, and puzzling credit scores, we never lose faith in the power of some metric about our income, our assets, or our debts to come to our rescue at some point.

The modern financialized marketplace taught many citizens to think of metrics as having the magical power to save them from their economic sins. Metrics represent an unfailing belief that even if the arc of the financial universe is long, it too bends toward justice.

In the time of COVID-19, we have transferred this habit to the disease. By tracking deaths, survivals, contacts and exposures, we hope to capture that in quantity which eludes us in quality. But since the numbers themselves are confusing, and reports of undercounting and misreporting abound, we are tempted to turn to the sacred authorities we most respect to read into the numbers for us what we most want to get out of them. This is the magical move, part science, part religion: from uncertainty in the facts to certainty in solutions.

Metrics can be meaningful measures of progress, but it’s important to remain aware of their limitations. Blind faith in metrics can mean that only that which is counted counts, but the hard part is knowing what to count, to begin with, and the extent to which we can count what counts. Saviours, numerical or not, are often set up for failure – and the fall can be steep when the trust in government and trust in technology is already eroding. In mapping out the relationship between magic and metrics, we encourage the exploration of a more measured path out of this crisis, one that focuses less on how to return to normal, but first and foremost what normal is worth returning to. We lament the loss of control over our home. But perhaps what makes our current Heimat so unheimlich is precisely the realization that we were never in control over our home, to begin with.

It might be easier to imagine the end of the world than the end of capitalism. And capitalism, much like globalization, will retain its appeal. But perhaps we have also reached the point at which one particular brand of capitalism has become ripe for disruption: that which is focused on mindless consumerism; growth at all costs, including staggering inequality, institutionalized racism, and irreversible environmental destruction; and that which retains what even the Economist describes as a dangerous gap between the world of finance and the world we live in ourselves; its own kind of uncanny.

One of us has spoken elsewhere of how the market has acquired the authority of something we experience as ‘the transcendent, moral, and ethical source of order in our lives.’ Now that this order is being turned on its head, we can reconsider what counts. Will we be able to seize the opportunity and return the sacred back to the social by relieving metrics of the obligation of doing the work of magic?

Learning to live with the madness

In the Danish online journal: Ignác Semmelweis, hand soap and the hygiene revolution; history of vaccination in Denmark; and Madagascan bathing rituals and the language of anthropology.