Osteuropa publishes a handbook on Belarus: including the economic foundations of Lukashenka’s authoritarian system; forms of Belarusian protest culture since the ’90s; Russia’s influence; EU neighbourhood policy; accounts of police violence; contemporary prose and poetry; memorial culture and much more.

The new issue of Osteuropa explores the dramatic events in Belarus following the fraudulent presidential elections last summer. Across more than 430 pages, renowned researchers and experts discuss the political, economic and structural factors behind the Belarusian people’s historic struggle for political self-determination.

Contributions examine the long decline of Aleksandr Lukashenka and his world view, Russia’s influence in Belarus, and Lithuania’s and Poland’s policies towards their awkward neighbour. Shocking accounts of police violence are accompanied by analysis of protest forms and considerations of possible scenarios for exiting the crisis. Completing probably the most comprehensive source available on the Belarusian protests are articles on specific issues such as the Belarusian IT sector and the atomic power plant Astranec, surveys of contemporary Belarusian prose and poetry, and a section on memorial culture. 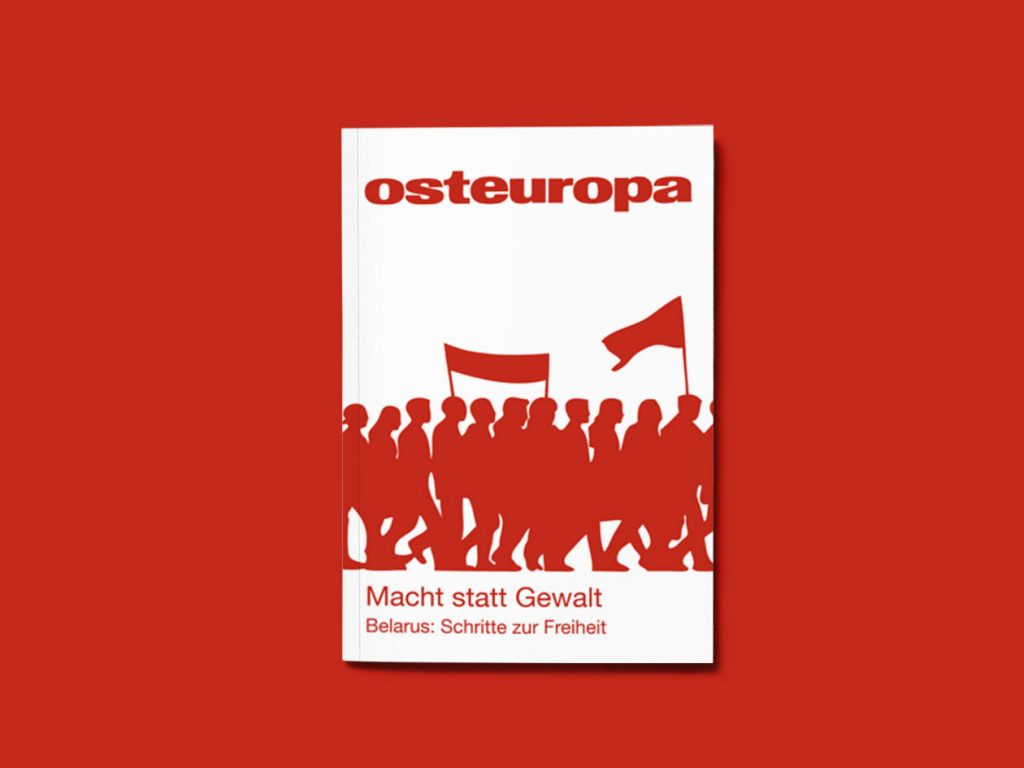 While the Baltic states, Ukraine and Russia pushed through free-market reforms relatively swiftly after the collapse of the Soviet Union, Belarus opted for another route unique in the post-Soviet world, writes economist Roland Götz in an examination of the economic foundations of Lukashenka’s authoritarian system. Ever since being elected in 1994, Lukashenka has sought state and political control over the economy, which according to estimates in 2019 account for around 60 per cent of the GDP.

But even the Belarusian economy is transforming, albeit as a result of ‘global and regional processes’ rather than targeted structural reforms. Götz explores in detail the international connections of Belarusian companies, showing among other things the heavy involvement of Austrian banks and telecom companies. He also demonstrates the significance of Russian oil and gas in the development of the Belarusian economy and the impacts of Belarus’s role as a transit country in income distribution.

What emerges is that, since 2007, the Belarusian economy has undergone constant decline and that the state-run companies have become an increasing burden. Crucial for long-term economic prospects in the country will be ‘how long and how firmly Belarus continues to hold on to its peculiar state-capitalist model.’ Götz does not believe that a union with Russia would be a way to compensate for the necessary economic reforms, since ‘the costs of reunification would impact negatively on Russia’s national budget for a long period of transition’, while the ‘political advantages of such a step for Russia are incalculable’.

Uprising, revolution, protest – various terms have been used for the citizens’ movement that has emerged in Belarus to break the bonds of authoritarianism. There is no disagreement, however, about the peaceful, mutable and creative character of the protests. In a highly informative article, Ingo Petz examines various forms of expression in protest culture, from music, art and theatre, to flash-mobs, human chains and graffiti.

Petz also looks at the roots and evolution of Belarusian protest culture since the 1990s, when musicians such as Lavon Volski and bands like N.R.M. set out to occupy niches resistant to the ossified and outmoded cultural symbolism of the regime. From the mid-2000s, a younger generation adapted this strategy to the web, which increasingly became the space for media and cultural projects: ‘Conscious that the opposition could not win a direct confrontation with the heavily armed regime, the protests increasingly shifted to niches that had been left to non-conformists, artists, free spirits and activists – under the watch of the state, of course.’

Practiced over decades, these partisan strategies for survival, occupation and dissemination serve the protest movement in its attempt to wrest public and virtual space from the control of the regime. As Petz writes: ‘The authorities understand the power of the image, which is why they disabled the internet for several days after 9 August. Parts of the country’s young IT scene, such as Cyber-Partizany, respond with attacks on ministry websites. There is little the regime can do to counter the protest scene’s hip imagery and design language, and the speed with which the movement can act.’

Out with the old

The philosopher Olga Shparaga, a member of the Organization Council initiated by Sviatlana Tsikhanouskaya, has become an influential voice of the protests. After being detained for 15 days last October, Shparaga crossed over into Lithuania, where she advised Tsikhanouskaya on education policy. In conversation with Osteuropa editor Volker Weichsel, Shparaga describes and categorizes the features of the nascent democracy movement, and explains why the movement has failed to completely mobilize factory workers and other public employees:

‘Perhaps because this revolution is very much defined by the “creative class”. The workers are to a greater extent dependent on the state, which makes them vulnerable – and they are not unified amongst themselves. Many of the younger ones are confident and convinced of their cause, but many also doubt that society will succeed in changing the situation in the country. Yet the majority of workers are dissatisfied with current situation.’ Shparaga is nevertheless optimistic that the change will come. ‘We are witnessing a conflict between an old and new social order. This is precisely why I am confident that our revolution will succeed. After all, no one has yet been successful in attempting to stop time.’