La Revue nouvelle publishes a 75th-anniversary retrospective, reactivating the archive through commentaries. Including dialogues on sexual liberation, prisoners’ rights, postcolonial Africa, paraliteratures, theatre and screen, and scientists vs. the rest.

La Revue nouvelle marks its 75th anniversary with reprints of social and political analyses published in the journal between the 1960s and the 1990s, along with newly commissioned responses. 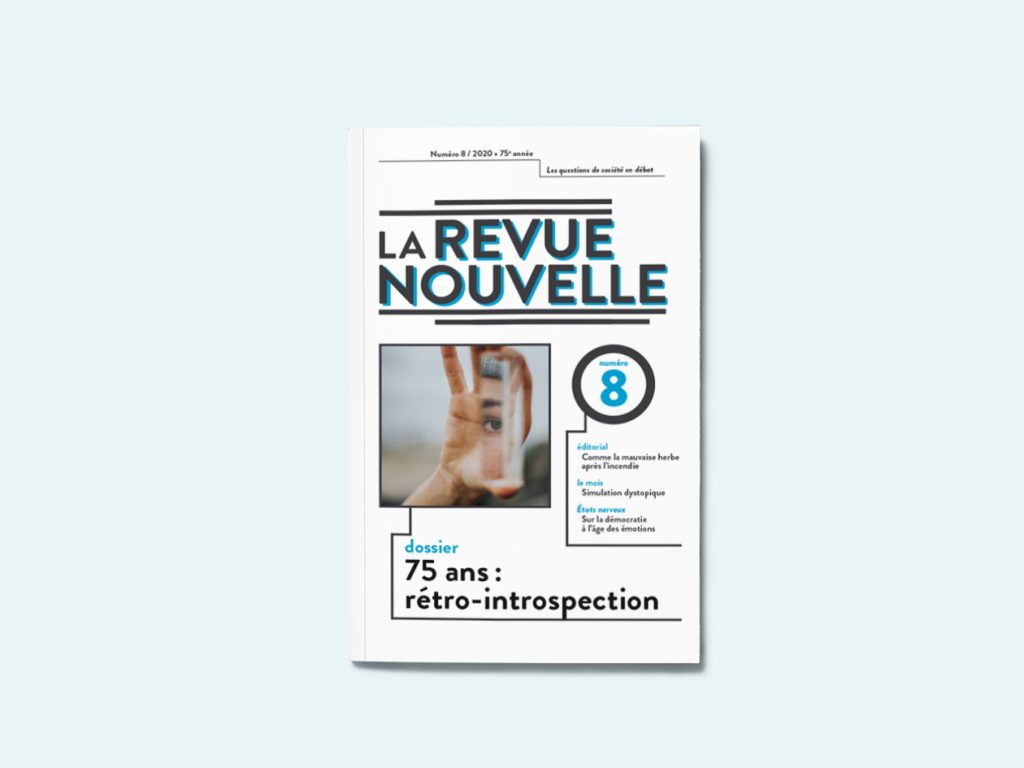 Writing in 1982, Nadine Plateau discussed the obstacles in the way of women’s sexual liberation. Although stereotypes had been eroded to the extent that women could speak in their own name, the ’80s saw feminist demands appropriated by consumer advertising, and sexuality treated as one more target for ‘optimization’. As prohibitions were replaced by subtle obligations, ‘liberation’ threatened to become an onerous duty rather than a pleasure. Media objectification continued unabashed, and among the unwanted side-effects of access to contraception was the expectation of constant sexual availability.

For the writer in 1982, a ‘new sexuality’ was still some way off, especially in ‘a society where women are still beaten, raped, economically exploited and culturally devalued’. Returning to the topic today, Plateau cites the successes of the #metoo campaign in changing laws and perceptions. Meanwhile, the emergence of a fuller scientific view of women’s sexual biology, along with new cinematic representations of female sexuality, are contributing to the ‘decolonisation of the imaginary’ necessary for true liberation.

Writing in 1979 on prisoners’ rights, Jean François deplored a situation ‘in total contradiction … with the elementary demands of respect for human rights’. UN recommendations on the treatment of prisoners were laid down in the early twentieth century, but national governments had been in no hurry to implement them. In Belgium, ‘rights’ were in fact discretionary privileges subject to arbitrary withdrawal, with no guarantee of legal recourse for prisoners.

Responding to this account of a ‘legal void’, Christopher Mincke looks at the Belgian situation today. New infrastructure, a new legal framework, and improvements in conditions are in place, but massive prison overpopulation has attenuated their positive effects. Change was also slow to come – laws explicitly stating that prisoners, deprived of their liberty, retain all of their other rights were only passed in 2005. It remains difficult to challenge decisions made by prison authorities, however, and the system is increasingly guided by ‘managerial logic’ more than ‘humanist ideals’. While the safeguarding of prisoners’ rights has progressed, it still lags well behind societal attitudes outside the prison walls.

The unspoken of postcolonialism

In 1967, La Revue Nouvelle published extracts from the journal of the missionary Jean Savoie, in which he reflected on the lukewarm reception given by the Congolese to Belgian ‘technical assistants’ arriving in their midst. Savoie set out a vision of how relations with the Congolese might progress toward ‘an authentic and loving encounter with the other’, anticipating a time when self-governance would be uncontested and foreigners would be welcomed unreservedly.

Also writing in 1967, Congolese priest Martin Ekwa advised that, while western volunteers must offer more than mere good intentions, it was not just a matter of skills and expertise: they also had to acknowledge the faults of colonialism. According to Ekwa, what Africans want above all is a meeting of equals, ‘an encounter that renders both of them more entitled to their status as a human.’

Rereading these two texts addressing the ‘unspoken of postcolonialism’, Véronique Clette-Gakuba salutes Savoie for acknowledging ‘the profundity of the gaping wound left by colonialism’. But she also questions his blithe optimism and reliance on a narrative of progress. While Savoie wrote in colonialist terms, Ekwa, speaking from the point of view of resistance against colonial authority, is able to diagnose the true maladies of postcolonial Congolese society.

Revisiting Eliane Boucquey’s 1975 article on women in the work of crime novelist Frédéric Dard, Laurence Rosier advocates the study of ‘paraliteratures’; playwright Florence Minder updates Daniel Simon’s 1992 text on the uneasy relationship between theatre and television; and Pierre de Buyl echoes the concerns voiced by Paul Thielen in 1969 on science and technology and the gap between ‘those who know’ and the rest of us.

For three decades, Memorial has delivered the facts that have enabled Russians to seek the truth about the Soviet past. Without its research, international accounts of the GULAG would also have been impossible. The attempt to close the NGO is the latest move in the Putin regime’s attempt to monopolize history.