Gateways to the world or fortress Europe? Attached to harbour cities are all sorts of often contradictory metaphors that appear both to encourage movement and to restrict it. Local, national and global processes impose their mark on the development and self-understanding of this particular urban space. Rightly associated with informality, cosmopolitanism and adventure, European harbour cities also bear the traces of a darker past: of colonialism, slavery and penal regimes. In the twenty-first century, maritime memories are recycled for heritage as de-populated mega-ports arise in zones disconnected from harbour cities themselves. Made redundant by containerization, communities formerly dependent on port economies are replaced by a tertiary sector seeking the prestige and space of waterside locations. At the same time, harbours and their environs remain peripheral zones attracting those seeking out the shadows of surveillance society.

In advance of the Eurozine conference 2012 in Hamburg, entitled Arrivals/Departures: European harbour cities as places of migration, articles explored how European societies deal variously with the cultural legacy of the “harbour city”. 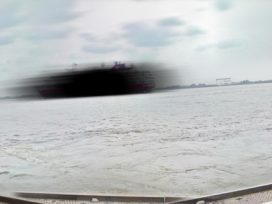 Migration in the harbour city of Hamburg

Hamburg is one of the principle harbour cities in Europe and probably the most powerful in economic terms. Situated about 80 kilometres from the coast, the city was once part of the “Hanse”, or Hanseatic League – a powerful confederation of the shipping and trading cities within German territory. Hamburg developed from a free and independent, sovereign state into what is today: Germany’s second largest city. This article is based on a harbour tour held 15 September 2012 as part of Eurozine’s 24th European Meeting of Cultural Journals in Hamburg.

Far more than in the past, urban space today registers the profitability of non-urban economies – the economy of the port, the mine, the plantation. Why and how? The key is the rise of intermediate services for firms: all firms today need more lawyers, accountants, insurance, and financial and consulting services than they did even 30 years ago. Thus a dynamic port will feed the growth of a very urbane professional class in whatever the major city servicing the port. Clearly, urban economies – professional services, design industries – also contribute to reshape urban space.

From Ottoman rule through the colonial period, Algiers’ function as military and economic power has been interwoven with processes of migration. Saïb Musette surveys this histoire croisée and asks where Algeria’s international metropolis is heading in the future.

Marseille: A community of strangers

Lacking any unified vision of itself, Marseille proves the possibility of a good society based on simple co-presence rather than intimate co-existence. As such, it offers an alternative approach to the diversity of Europe as a whole, argues Joëlle Zask.

From the late eighteenth century until the 1960s, Gothenburg’s port served as an industrial centre for the region and point of arrival and departure for migrants of all nationalities. This social-economic history is all but absent in the “harbour identity” promoted today, writes Britta Söderqvist.

From economic powerhouse to cultural destination: like harbour cites throughout the north, Bremerhaven’s former docks have been reinvented as a centre for scientific research and a symbolic universe dedicated to the local maritime tradition, writes Helmuth Berking.

Is it chance or social class that determines where one gets on and off the bus? “Right to the City” activist Nicole Vrenegor takes the number 3 from Hamburg’s outskirts to the new HafenCity development, stopping along the way to talk to people who oppose the sell out of the city.

On the pioneering role of European harbour cities

The globalization of the harbour workforce challenges the democratic political culture typical of traditional port cities. As prime examples of the convergence of economics and multi-culture, European harbour cities can lead the way in revitalizing forms of urban citizenship.

Deciding the future of the Mediterranean

Regeneration of the Mediterranean region must draw on its legacy of cosmopolitan democracy while offering prospects for ecological, energy-political and scientific development. The Mediterranean may then re-enter the European consciousness as the Mare nostrum, with all the joint responsibilities that entails.

On the new geography of containerization

Ports as points of juncture in the globalized transport network, operating mechanisms of access and arrest; the oceans remapped by containerization, cargo-shipping setting the pace of world commerce; the new harbours as decontextualized zones, nautical memories recycled for heritage: Olivier Mongin outlines a social geography of the global maritime system.

The container is the universal unit of the global commodity society, facilitating the swift exchange of all kinds of product. Precarity, likewise, connotes a basic form of labour that submissively and flexibly adjusts to any form of employment and system of production.

Ghosts on the waterfront

An interview with Marcus Rediker

In an excerpt from his acclaimed book The Slave Ship: A Human History, historian Marcus Rediker describes the deep-sea sailing ship as linchpin of the emergent transatlantic economic order and instrument of terror for slaves brought from Africa to the Americas. In a subsequent interview, he discusses the role played by European harbour cities in the slave trade and their responsibilities in reckoning with its moral legacy.

Walter Benjamin’s description of Naples as a “porous city” absorbent of heterogeneity applies equally to other harbour cities, write Jude Bloomfield and Franco Bianchini. On cultural hybridity, economies of informality and strategies of creativity in four European ports.

Recent historiography emphasizing the egalitarian-democratic character of eighteenth-century piracy undermines Carl Schmitt’s quasi-legal distinction between the partisan and the pirate and reinstates the pirate as political actor within the emergent maritime state order, argues Dominique Weber.

Colonial elisions in the Swedish self-image

The re-launch of a reconstructed eighteenth-century merchant ship was supposed to promote Sweden’s image as reliable trading partner with an immaculate past. But the failure throughout the project to acknowledge the colonial involvements of the ship’s former owner suggests a less complimentary story, writes Mikela Lundahl.