The City Plaza Hotel in Athens had been abandoned before local activists and refugees occupied the building from 2016 to 2019. Together, they converted the building into a self-managed refugee accommodation and support centre; the Greek government’s reluctance to help those who flee war zones in Africa and Asia had driven the group to take initiative. The resultant facility was an excellent example of commoning, the creation of common space through inventive, collaborative action.

The city may often be considered the product of institutional decisions and market mechanisms but creative processes developed through everyday practices can explicitly or implicitly mobilize the transformative potential of its inhabitants. Henri Lefebvre describes the city as ‘the perpetual oeuvre of the inhabitants, themselves mobile and mobilized for and by this oeuvre [… where] time-spaces become works of art’.1 Rather than identifying the city as an existing, accomplished spatial order, he sees it as a developing process with inherent promise.

Lefebvre continues: ’[T]he urban remains in a state of dispersed and alienated actuality, as kernel and virtuality’.2 Although ‘virtuality’ could be read here in relation to capitalist productive forces, tied to value extraction and severed from their time-freeing potential, such an interpretation would reduce this statement to the canonic Marxist approach that considers the development of productive forces as an inherently liberating process constrained and captured by the capitalist appropriation of production. Instead, I believe Lefebvre, in line with his reinterpretation of everyday life, is asking us to explore the dynamics of city life as a source of emancipating spatial practices. Indeed, the ‘right to the city’ becomes the right to collectively produce it through creative cooperation.

Acts that reclaim the city as commons reflect Lefebvre’s approach. Contemporary endeavours to re-appropriate the city are not only a product shared by everyone, but also a process developed by everyone through sharing. At the root of such collective creativity, usually forced to adapt to dominant market rules, lies a shared capacity that originates in urban life itself – the capacity not only to adjust oneself to existing spaces but also to invent spaces and, even more remarkably, to envision, imagine and represent potential spaces. Through this multileveled capacity shared by everyone but often alienated by dominant habits, people can actually transcend both the limitations of urban order and the limitations of the sensible.3 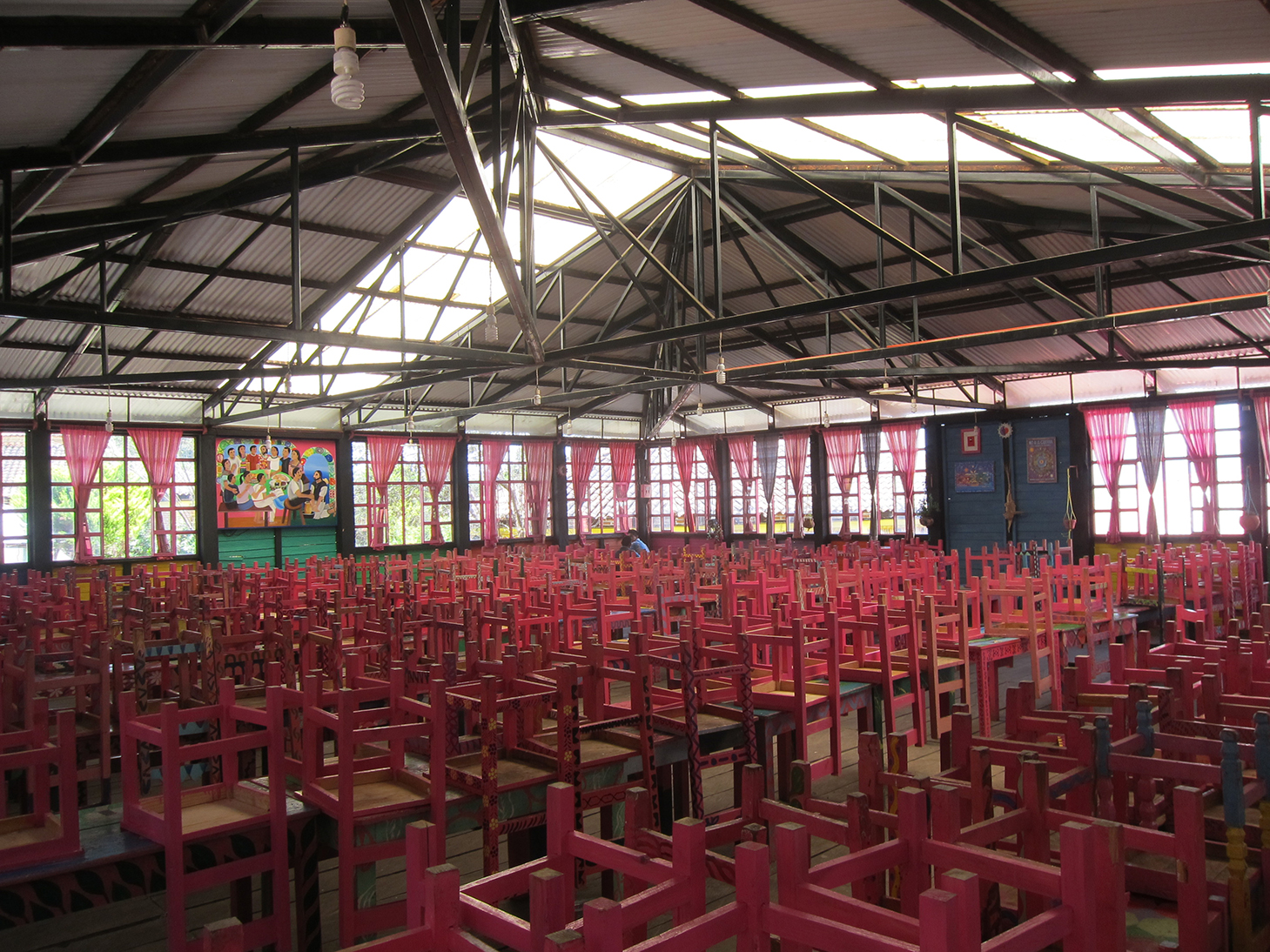 Urban commoning seems to release the visionary potential to perceive, inhabit, think and imagine spaces. It is not limited to establishing rules that ensure the distribution of urban space considered good for sharing. ‘Urban space’ is indeed a term that encompasses many levels of material and immaterial realities, including: entities such as buildings and roads; and shared experiences such as centre-periphery, proximity and distance, and predominance and subordination relations, which are all power relations translated into spatial qualities.

The creation of ‘common worlds’ is not only a result but also a fundamental starting point at the base of urban commoning. Generally, a common world is crafted within a structure of domination, whereby different levels of access to the means that define the common world’s characteristics often ensure that some people are in a better position to integrate their values and interests to this world.

However, commoning points towards common worlds that are equal to everyone. The inclusion of different approaches and interests allow for negotiations that can challenge rather than reproduce existing geometries of power. Should commoning be capable of moving towards an emancipatory society, it would do so by developing forms of power-sharing that do not cancel out differences but benefit from them. Cooperation practices explicitly test the possibility of achieving equality. Indeed, cooperation specifically oriented towards equality is likely to discover the necessary tools. 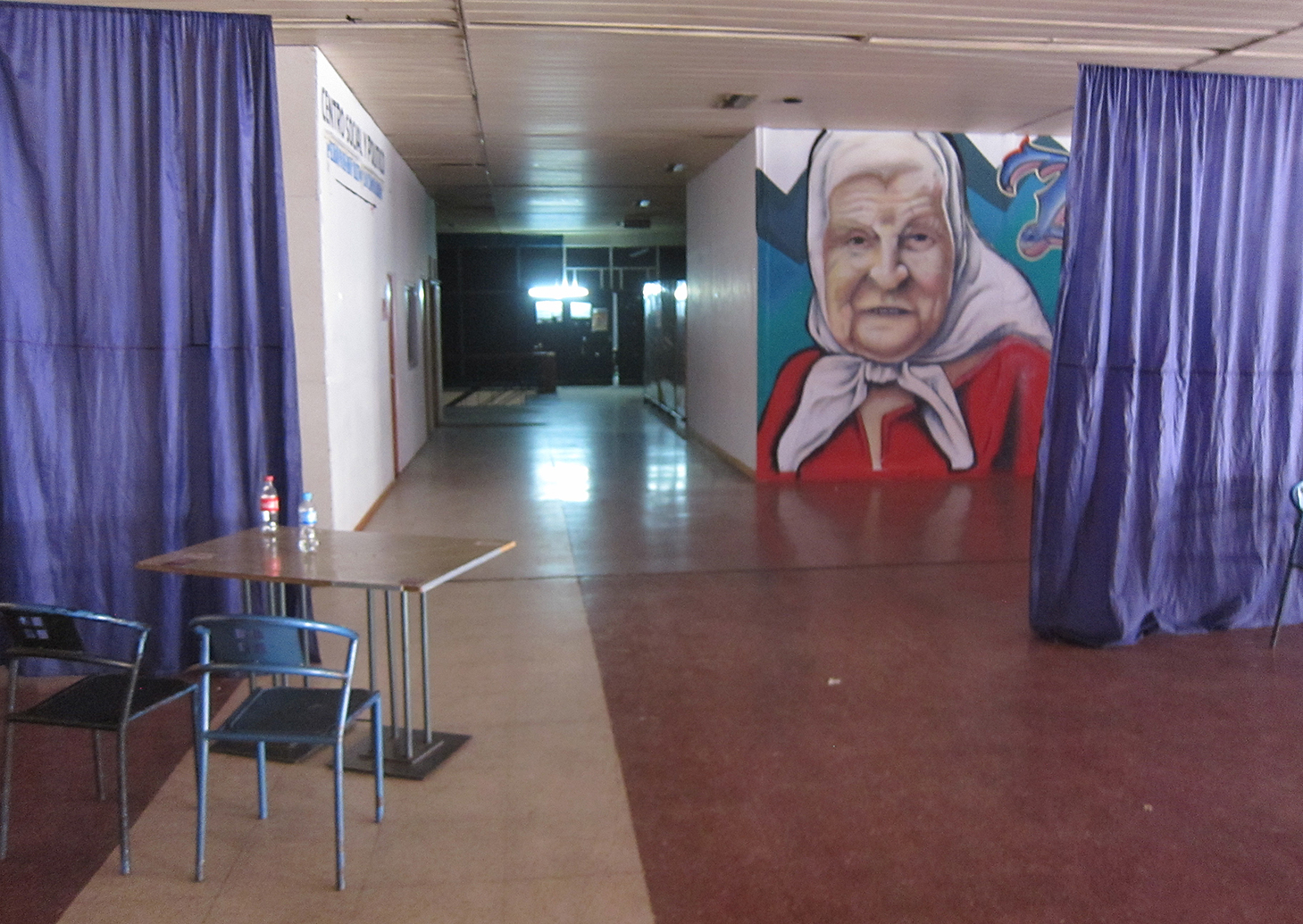 Common worlds can, therefore, be collectively created without imposing homogeneity. Indeed, the term ‘common ground’ may even be clearer. Common ground indicates a more or less temporary accomplishment that results from a specific agreement based on a describable context of negotiation. Common ground does not portray the image of a grand, structured whole as common world possibly does. Common ground can shift. It is not prescribed and is created by the direct involvement of those engaged in becoming commoners.

Common ground’s potential inclusion of agreements and the development of agreed-upon rules, which might even aspire to the construction of a common world, do not automatically translate into spatial qualities. Nevertheless, space, considered as both a set of relations and an arrangement of material elements, is a distinctive factor that shapes commoning.

As in the examples that follow, spaces give additional characteristics to the common ground on which commoning develops. Despite being apparently obvious, the fact that power-sharing acquires its form and defining qualities in and thorough space sharing tends to be forgotten. Just as a patriarchal table or a church square are arrangements that not only express but also reproduce and establish power inequalities, the spatial arrangements of commoning make it what it is – a means for sharing equally.

Common spaces all seem to emerge as spatiotemporal thresholds. They are in-between spaces. As spaces in the making, they are both produced and inhabited as passages rather than places. Passages are indeed mediating spaces, spaces of transition that connect adjacent areas without creating one undivided whole. They articulate space rather than contribute to the production of uniform, homogeneous areas. Passages bring elements into proximity without completely erasing distance. Put another way, passages create areas of encounter and negotiation between areas that are different.

Thresholds also mark in-between periods of time, which are full of potential change and expectations as well as risks. This quality corresponds to the temporal conditions activated by common spaces. The development of common spaces disrupts society’s established, linear time and the cyclical character of established habits. Space commoning opens ruptures and creates potentialities. Common spaces challenge the standard regulation of space and time that reproduce set social relations within an imposed urban order.

Common space thresholds may also challenge the identities of those entering the commoning process. Identities established within a context of inequalities can be unsettled by negotiations that directly aim to organize cooperation and resource sharing, and indirectly move towards forms of social organization based on power-sharing. Subjects, both individual and collective, are constituted in and through commoning practices. The characteristics of such subjects develop as they produce spaces of becoming rather than places of belonging.

Specific examples illustrate such qualities. In returning to the City Plaza Hotel scenario in Athens, for example, commoning is seen to have empowered refugees involved in their own organization.4 Everyday tasks in the collectively managed co-habitation space were specified and distributed by the general assembly of the building, in which everyone participated. Decisions were based on shared responsibility and egalitarian cooperation.

Although racist attacks and state intervention to assert the hotel’s private ownership occasionally forced City Plaza occupants to barricade the space, its open threshold character, connecting different cultures and mentalities while constructing necessary common ground, was more defining. The City Plaza was a collective experiment that managed to create a different kind of community comprising of local activists, refugees and immigrants, and international solidarity activists – a community always in the making that welcomed newcomers.5 Indeed, many of those involved experienced a productive identity crisis when exposed to different approaches to gender issues, leadership habits, family relations and issues concerning ownership or individual privacy. Self-management was the catalyst for this process open to every difficulty and challenge connected to power-sharing in a community that aspired to be a community of equals. 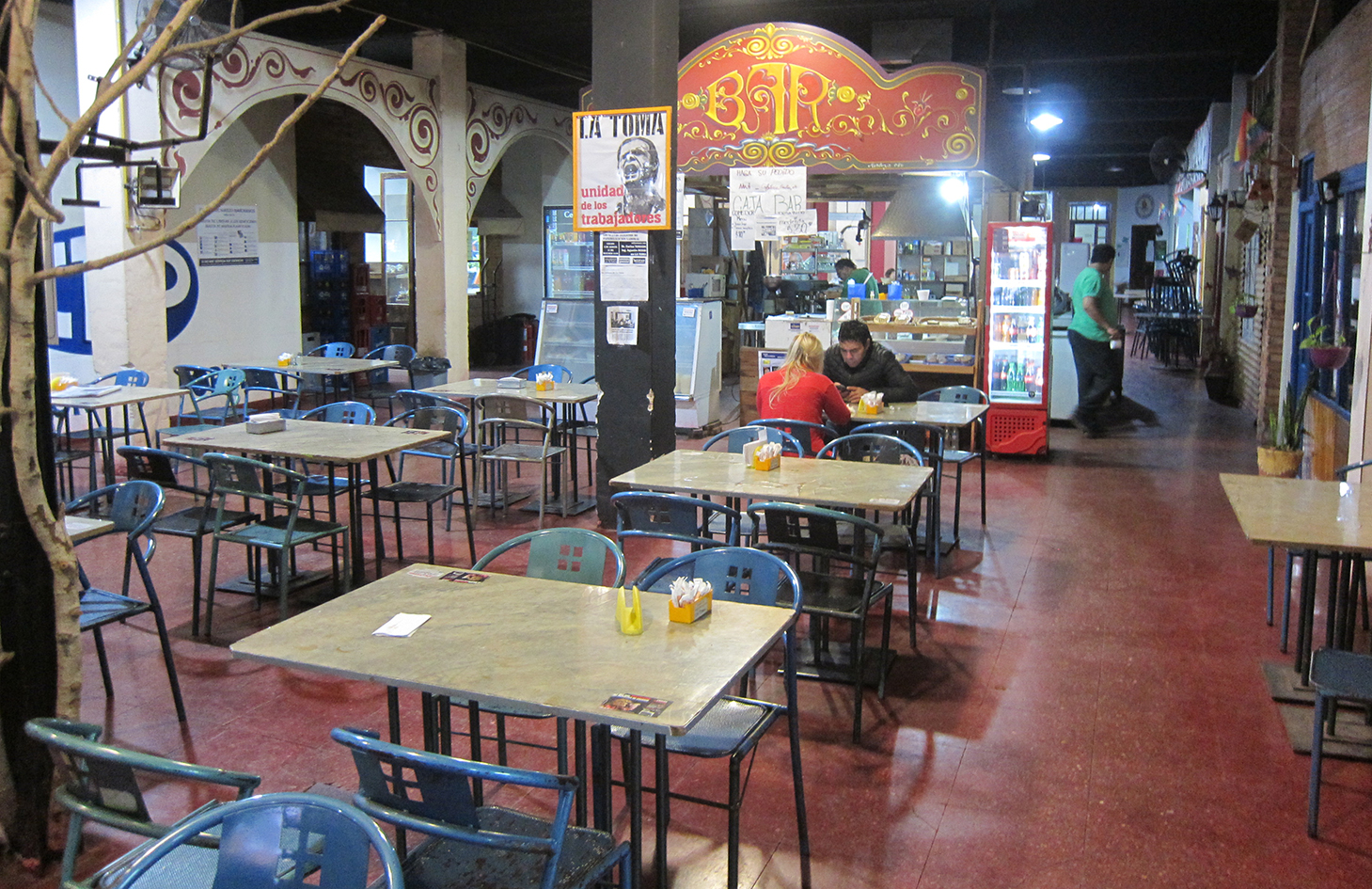 Another example, this time in Rosario, Argentina, follows the story of a supermarket that was first occupied by a group of activists and store workers in 2001.6 With the economic crisis as a backdrop, which had sparked many urban riots, self-managed initiatives were emerging throughout the country. In this case, workers had not been paid by the retail company and decided to take matters into their own hands. The resultant initiative became more than an Argentinian ‘recuperated enterprise’. The thriving self-managed social centre called la Toma (the Take) includes an affordable restaurant, an organic market connected to the Confederation of Workers of the Popular Economy (CTEP), a cultural centre, a bookshop and meeting places for political initiatives. Indeed, this shared socio-cultural space has become an important meeting point for many groups and individuals who are trying to both survive the crisis with dignity and explore relations that transcend standard market logic. Social and political identities are being challenged in this open-ended process.

A final example is provided by a ‘shoeless university’7 in San Cristobal de las Casas, Mexico.8 The Indigenous Centre for Integral Learning (Centro Indígena de Capacitación Integral, CIDECI) is an institution for indigenous people who would not otherwise have the resources to study and are excluded from official higher education. Students are invited to contribute their traditional wisdom, including different approaches to nature and history; the university’s protection and promotion of shared, alternative knowledge are developing a dense network of commoning relations.

The very basis of pedagogy has been challenged – teachers and students, the educated and those in need of education are involved in an ongoing process of exchange that cross-fertilizes indigenous and western knowledge. Young students who return to their communities can put their new knowledge and acquired skills to good use. This common space cultivates new ways of approaching global problems by developing the arts and politics of change. Directly inspired by Zapatista9 autonomy and recently integrated into the Caracoles self-management municipal network, CIDECI produces forms of commoning that aspire to an emancipatory future.

All three examples briefly suggest that space commoning, whether explicitly emerging through collective effort or implicitly being developed through practices of reclaiming the right to a dignified urban life, is always an open process that produces spaces of a threshold character and challenges dominant spatiotemporal order. Space commoning tests forms of cooperation and arrangements of social organization that attempt to go beyond inequality and injustice.

Togetherness and solidarity are, therefore, issues to be explored and pursued not only through debates but also through concrete experiences of real peoples’ real lives. In searching for new forms of ‘we’, commoning avoids uniformity and homogeneity by offering the more risky path to an inclusive, common life open to differences that contribute to its construction.

The Zapatista Liberation Army (EZLN) does not intervene in the management of autonomous communities or the Caracoles system but protects such forms of autonomy from the State and paramilitary aggression.

Published 21 May 2020
Original in English
First published by Springerin 02/2020 (in German), Eurozine (in English)