Public Seminar engages with the intellectual production and vision of the Movement for Black Lives. Why elites need to focus on institutional structures and allocations of resources that reproduce violence; how regime change may be coming home to the USA; and pro and contra the campaign to defund the police. 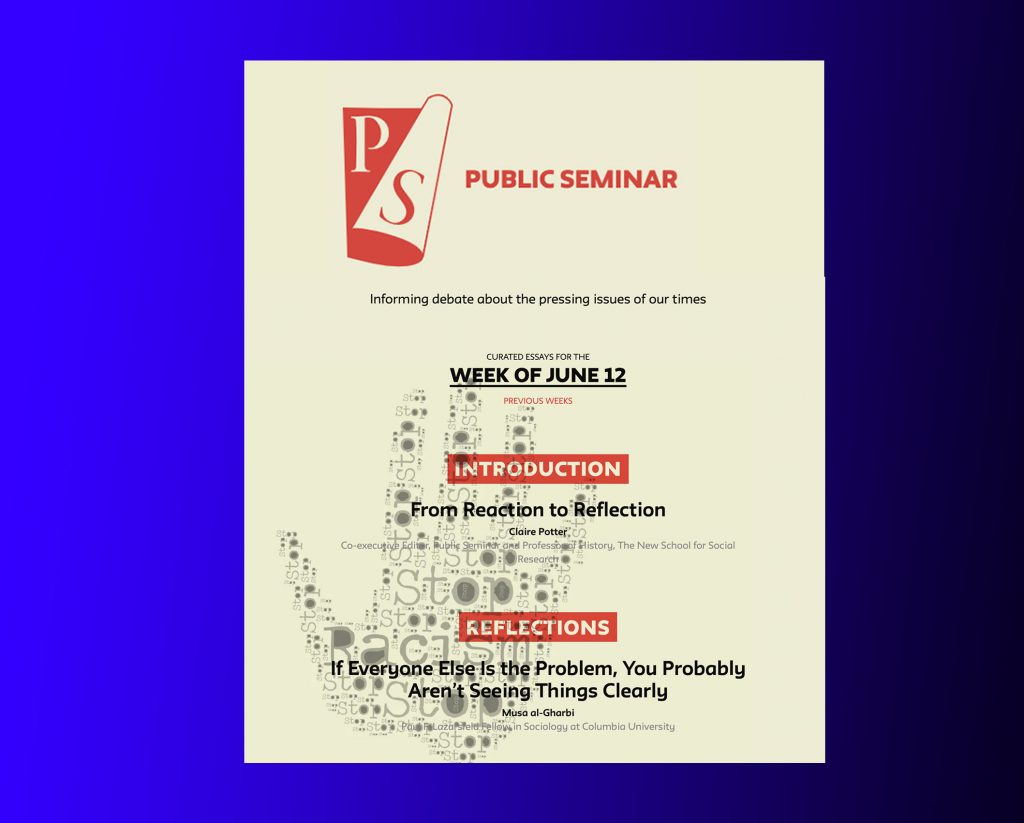 In the wake of protests that have put racial violence at the forefront of the news, Public Seminar has gone from reaction to reflection, writes editor Claire Potter. ‘Our authors are re-engaging the intellectual production and vision of the Movement for Black Lives and immersing us in their vision for structural change.’

Musa al-Gharbi asks elites to stop ruminating on how white people experience racism in themselves and others, and focus instead on the ‘behaviours, institutional structures, and allocations of resources’ that reproduce violence. ‘The tension is that the professional-managerial class in the United States skews liberal, especially on “cultural” issues like race … However, we are also among the primary beneficiaries of systemic inequality. We are heavily invested in “the system” and complicit in its operation.’

Peter Dreier recalls that today’s protests are the culmination of ten years of organizing and resistance: ‘M4BL has helped explain to white Americans that what they are seeing in those videos is not simply the actions of rogue or poorly-trained cops but structural racism. A majority of white Americans now believe that black Americans are not treated fairly by the police and the criminal justice system.’

John Stoehr argues that white Americans are starting to see their country as black Americans see, live, and die in it: ‘“Regime change” is usually what the United States does to other countries. But our history can be understood, perhaps best understood, as one regime changing into another every forty years or so, beginning with a period of flowering, then mainstream acceptance, and then a period of decadence, decay, and illegitimacy, usually amid some kind of crisis.’

Micol Siegal argues that reform is not enough and that the police must be dismantled: ‘The police are the people who inflict the state of exception on those whom it deems unworthy of rights. As things now stand in America, they get the deadly last word. What that means is that in order to be effective, the demands protestors make need to move towards a world without police.’

Abolitionist movements catalyse transformation but have been historically prone to fracture and division, writes Sidney Tarrow. ‘With a broad swath of public opinion outraged over the persistence of African American deaths at the hands of the police … surely there are reform issues around which the progressive and moderate Left and independent voters can unite without raising the provocative banner of “defund the police.”’