The end of illusions?

The Soviet invasion of Czechoslovakia in August 1968 caused the Soviet empire to lose its internal logic even for the communist faithful, writes Samuel Abrahám, who bore witness to the events. Yet today, the naivety of the reform communists of the 1960s serves as a pretext for the cynical dismissal of any vision of a better political system.

The Soviet Union’s invasion of Prague on 21 August 1968 and subsequent developments are now mostly presented in terms of nostalgic memories or dramatic documentaries, while the ideological battle raging over its ruins tells us more about the present state of society than about what happened in 1968.

For the strongest critics, the effort to build “socialism with human face” was either an insincere gesture or a naive attempt to square the circle. For them, the entire period from 1948 to 1989 was not a complex and divided era, but one continuous “totalitarian regime” to which 1968 and the decade as whole was no exception.

The symbol of 1968 – Alexander Dubcek – attracts the greatest abuse today. Except by his faithful supporters, he is presented as a smiling simpleton, a naive or opportunist politician. On the other hand, Gustáv Husák1 is benefiting from unexpected revision: as the fox who thought he could trick Brezhnev and save the torso of the reforms. And when he became the leader, the poor fellow had no other choice. Yet the fact remains that Husák had a thousand chances to act differently. However, he chose the worst course for Czechoslovakian society. He achieved what he had wanted all his life – to be at the top, even if it meant being detested and humiliated.

The motives and actions of individuals and the turbulent political events of the Prague Spring that ran from January to August 1968 are now only historical events. However, there are two factors that still resonate today. First, the invasion had fatal consequences for the communist world and its support base in the West. Second, there was an intense feeling of solidarity in society after the invasion. 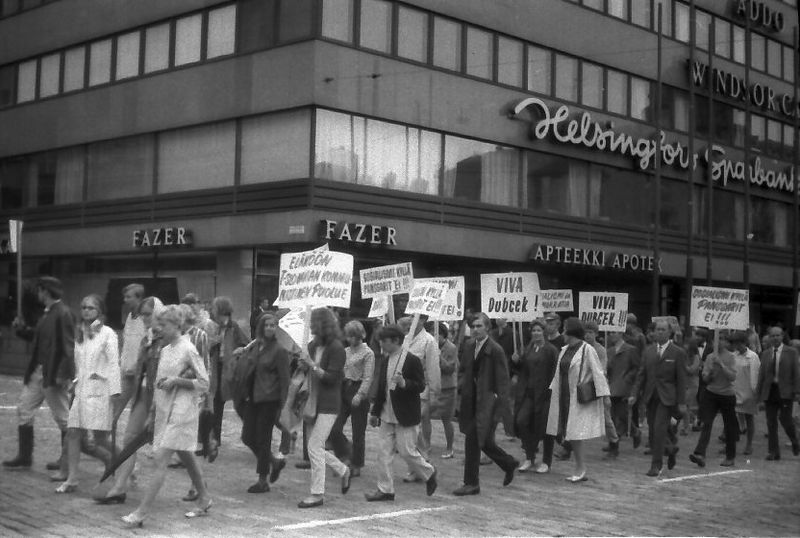 Demonstration in Helsinki against the Soviet-led invasion of Czechoslovakia in August 1968. Source: Szilas/Wikimedia

The 21 August 1968 was, first of all, the end of a great illusion on both sides of the Iron Curtain. The Soviet Empire was perverse from the very beginning, but from that day it also lost its internal logic for the communist faithful. It brought about the collapse of the illusion that in spite of the atrocities and suffering of millions there was a healthy foundation which would save us. Even before 21 August, the majority of the population hated the communist regime, but after it, no intelligent, mature person anywhere from East Berlin to Vladivostok believed that socialism would convince rather than silence its victims. After 1968, the whole Eastern Bloc turned into a cynical apparatus of fear and power, with its leaders united only by the comradeship of a shared lie.

However, a regime or empire without faith in itself, without sincere proclaimers of its ideology or enthusiastic artists, will fall into a state of clinical death. Unfortunately, those in power can prolong this process of dying. In our case, they succeeded for twenty cruel years until 1989.

To general surprise, the Soviet Empire collapsed in 1989. Despite the analyses of Sovietologists or of experts from the camps of Ronald Reagan or Pope John Paul II, it was and is not clear why the Soviet Empire disintegrated almost without putting up a fight. The end of the ideological illusion after the invasion of Czechoslovakia was certainly not the direct cause of the fall of the empire, but it was a basis without which the whole system would not have collapsed so suddenly and in the way it did.

In the West, a whole generation of admirers of the post-Khrushchev thaw were forced to commit intellectual suicide after the invasion of Czechoslovakia. Some retreated into seclusion, others transformed themselves into Euro-communists, environmentalists or feminists. Some even jumped all the way to the far-right or neo-fascism. They made a virtue out of necessity, and one can add that many became more useful than they had been during their communist past.

The second important result of the invasion of Czechoslovakia was the immediate mass resistance. The first eight months of 1968 were a matter for several hundred politicians and intellectuals. On August 21, on the other hand, the whole of society resisted the Soviet troops: non-violently, courageously and with determination, in the tradition of Chelcicky, Tolstoy or Gandhi. Helped, one might add, by typically bitter humour. Those few weeks and months after the invasion have penetrated the genetic code of the political culture of Slovaks and Czechs. Society could be and was humiliated, but nothing could take away the common experience of almost religious solidarity and the feeling of resistance against the occupiers. Obviously, just like today or a hundred years ago – or a hundred years into the future – there were opportunists and cowards who quickly recovered and seized any opportunity to collaborate with the invaders.

So what, one might ask, that people in eastern and western Europe dropped their illusions about one perverse political experiment? Every society has always had and should have illusions, even if the price to pay is great. One criticism of the Prague Spring is that it was a waste of energy: there was no chance that Dubcek could have succeeded against Brezhnev and Suslov. Yet that reproach can be used for any failed but significant endeavours in history. Without illusions we would not have progressed from the caves to the moon. There would have been no religions, no French Revolution or a concept of a just democratic society. There would be no culture either, or art – a pure fruit of human imagination.

Personally, what is most memorable is the feeling of shared faith and solidarity of citizens facing tanks and guns on the streets of Bratislava. I have an indelible image in my mind’s eye of a woman sitting down in front of a roaring tank, putting on her make-up, refusing to pay attention to the machine that could have crushed her in a second. She lost fear but also hope. Six months after the invasion a young student in Prague immolated himself, leaving a note to Czechs and Slovak not to give up the resistance against the Russians and local opportunists. He failed, but the memory of those days and months after the invasion stacked to everybody¹s mind and 1989 was natural continuation of that interrupted revolution.

Today the feeling and message of solidarity of 1968 is gone, so is the hope that a just and fair system is possible. What rules now, forty years on, is a ruthless bureaucratic democracy cushioned by a comfortable consumer lifestyle. The naive hopes of the reform Communists of the 1960s are still used as a pretext to trample any vision of a better and universally just society. On the Left, meanwhile, the battle is still waged on the ersatz battlefields of anti-globalization and environmentalism. Honourable efforts but hopeless goals. It seems that the 1960s was the last time that a sincere hope and vision, however illusory, of a better political system existed.

As deputy premier of Czechoslovakia in 1968, Husák was a supporter Dubcek's reforms, yet went on to reverse his position as general secretary of the Czech communist party (1969-1971) and then as Czechoslovak president (1975-1989). It is controversial whether he is to be remembered as a pragmatist who saw in a period of relative affluence or as the head of a repressive security state -- ed.