Chronicle of a massacre

Sports journalist Brian Glanville was sent to Mexico City in 1968 to cover the Olympics but instead found himself reporting on the anti-government demonstrations at the Plaza de las Tres Culturas. Despite the ensuing massacre, he recalls, indifference reigned at the Olympic Village.

The Olympic Games, like the poor, alas, are always with us. Drug ridden. Insanely expensive. Defying what the communists would call their own internal contradictions. Britain is saddled with them now, and God knows what they will cost in the end. But first, there will be China.

An awakening economic giant, caught between the Scylla and Charybdis of communist repression and rogue capitalism, perhaps the symbol and symptom of the Chinese Olympics is the poor wretches who fall to their deaths off the stadia they are building. Underpaid and underprotected. In Beijing, moreover, the pollution is such that numerous athletes will live outside the city. And Ethiopia’s world-record marathon champion refuses to compete in China, fearing the pollution. We know that the Chinese government imposes ruthless censorship on the media and the Internet. Though fortunately, a grovelling attempt by the British Olympic authorities to prevent any kind of comment by their competing athletes has bitten the dust.

Abortive censorship was the name of the game, or the Games, in Mexico City in 1968. They were the third Olympics I had reported, for the Sunday Times, and I had decided they would be my last. I’d already written my novel The Olympian, which appeared in London and New York the following year. Essentially an allegory, using the figure of an English miler as a kind of Faust, driven to greater and greater illusory efforts. And I knew all too well the narcissistic self-involvement of the athlete, with his or her “event”. Destined to be all too wretchedly exposed.

I arrived in Mexico City from Buenos Aires, where I’d been covering the torrid match between Estudiantes and Manchester United for the world club title. The Olympics would begin the following week, but I had already been told to report on the so-called student riots. Only the previous day, the notorious blue-helmeted riot police, the Granaderos, had battered down the door of a barricaded polytechnic.

So, that first evening in Mexico, I was told to attend the student mitin, as it was called, in the Plaza de las Tres Culturas, at the end of the Paseo de la Reforma. Three cultures, comprising Aztec ruins, a Spanish colonial church and a vast, yellow-tiled apartment block, from one of whose terraces the student leaders would address the crowd.

It poured with rain, the students spoke; nothing happened. Speaking Spanish as I did, I found myself lurking round corners, talking to student activists. To be misled; they were convinced that nothing violent was going to happen.

So it was that when the bullets started flying in the Plaza de las Tres Culturas the following Wednesday night, it wasn’t I but the amiable, modest Guardian athletics correspondent, John Rodda, who found himself lying prone on the student leaders’ balcony, a secret policeman’s gun jammed into his head, while bullets pinged off the wall behind him.

Earlier that day, we had travelled up together on one of the press buses from the Villa Olimpica, the Olympic Village, far from the centre and a kind of Shangri La for athletes. John told me he was going to the mitin. I told him that I wasn’t, since I was certain that nothing exceptional would happen.

Early the following morning, I was phoned in my hotel by my Sunday Times colleague, John Lovesey, who told me that the previous night “all hell had broken loose”. He had been roused from his bed to attend a press conference, to be told that there had been a riot in the square and a few deaths. Where the Mexican officials had seriously miscalculated was in their evident illusion that they were dealing only with a pack of dumb sports journalists. They may well have had a point when it came to the leathery old Americans, permanent adolescents, arrayed in their peaked caps and festooned with badges. When, a few days later, still shell shocked by the events, I ran into large, lumbering Arthur Daley, sports columnist then of the New York Times, and told him what had happened, his reply was, “But that was just one section of the city.”

It would transpire that more than 300 students had been killed, their bodies taken to Campo Militar Numero Uno, to be burned. John and I visited the Plaza that Thursday morning. There was a huge scar left by a bazooka shell running down the yellow-tiled face of the apartments. Tanks stood in the square. Broken glass was everywhere. 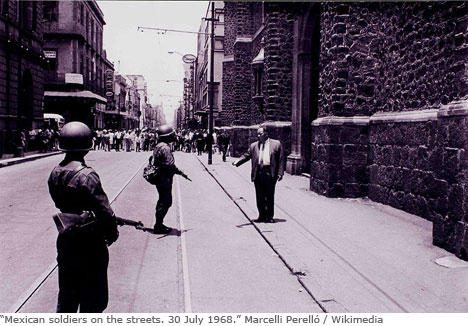 The government, the Partido Revolucionario Institucional (PRI), which had been oppressively in power for 40 years, had seriously miscalculated. For sports journalists, notably those from England, Italy and Germany, turned into outraged investigators; to the fury of the PRI. And so we discovered Por Que and the brothers Mario and Roger Menendez Rodriguez.

Por Que was a cheaply produced but defiant weekly magazine. John and I went to its offices, then on the Colonia Romana. There we found big, hefty, genial Mario and his handsome and more aesthetic brother, the younger Roger. They were scions of a well-known newspaper-owning family in Yucatan. Por Que that week was filled with alarming photographs of the atrocities committed in the Plaza by police and military. Indeed it was the soldiers who had surreptitiously ringed the square, and when a helicopter buzzed overhead and dropped flares, and the white-gloved secret police in the crowd had fired into the air, they had moved in, bayoneting and shooting.

Photographers knew they had no chance of having their pictures in their own newspapers. In a wily sort of censorship, the government of Diaz Ordaz controlled all newsprint, which would simply not be forthcoming for any newspapers which offended. So it was that the photographers took their pictures to Por Que.

Mario, its editor, told us that an attempt had recently been made to kill him. A coach had driven straight at him, but he had jumped in time onto the bonnet of a nearby Renault, so that the man standing innocently next to him had been murdered. John and I duly wrote our report for the paper, which was headed, with echoes of the ice-pick assassination of Leon Trotsky, “Murder in Mexico”.

Meanwhile, at the Villa Olimpica, all was unawareness and indifference, as the athletes concentrated on their events. Sitting on the steep green bank above the training track, I tried to tell what had happened to the pretty, blonde Lillian Board, the English 800-metres contestant. “I know it sounds terrible,” she rejoined, “but I’m more interested in that girl down there. You see, I’m running against her.” A rare exception was the Northern Ireland pentathlon athlete, Mary Peters, who had heard that parents of the killed had been presented with their ashes.

John and I continued to work very hard on the appalling story, wondering the while whether we were under surveillance; even threat. We filed another comprehensive piece for the following Sunday, but to our frustration, it didn’t appear. Those were the high, halcyon days of “legendary” Harry Evans as editor.

A year later, I was back in Mexico City with the England football team, due to return in 1970 to contest the World Cup finals. It was to find Mario in solitary confinement, Roger and Por Que exiled across the Reforma to the grim Calle Xochimilko. Where Mario had kept his gun in his desk, Roger’s lay on the top. He told me that lorry loads of the magazine had been hijacked.

Fast forward again to 1986. I am in Mexico City again, for another World Cup. Walking down a back street in the city centre, I see in a bookstall rack what seems a familiar publication. A magazine which closely resembles Por Que. The title is Por Este – “for this” rather than “why”. I bought it, opened it and there inside on the masthead are the names of Mario and Roger. With excitement, I telephone their office. Mario answers the phone. I tell him it’s I. “Oh yes,” he says casually, as though we’d seen each other the day before, rather than 18 years ago. I arrange to come over.

This I do with my friend and colleague Paul Gardner, an Englishman working for an American television company. There is a splendid reunion. Amazing stories to be told. How Mario was sprung from prison when a guerrilla leader had captured the Rector Elect of the University of Guerrero, and had exchanged him for political prisoners, Mario among them. How Mario had then taken off to spend years in Cuba, working on a PhD. How Roger, in the meantime, had been arrested and tortured, the printing presses of the magazine smashed up, Roger imprisoned. How a new, more democratic, president, Portillo, keen to improve relations with Cuba, had allowed Mario to return, Roger to get out of jail, the magazine paid compensation to restore its printing presses and to publish again: provided it changed its name to Por Este.

Since then, the long, corrupt monopoly of the PRI has come to an end. When the stifling autocracy of the communist regime in China comes to an end, who can guess? The colossal sums they have spent on their Olympics may or may not buy the propaganda success they so much want them to be. Since they no longer seem to be drugging their once all-conquering swimmers, gold medals in the pool will at least be, for them, at a premium. As for the Olympic Games themselves, they remain what they have so long been – a bloated, costly anachronism.

At least there is no longer the bitterly contentious figure of the Spanish reactionary Juan Antonio Samaranch presiding over the Olympic body. Nor yet that of the ineffable Avery Brundage, a Nazi sympathiser at the Berlin Olympic Games of 1936, still Olympic president in 1968 – the man who, when told that the celebrated Italian journalist Oriana Fallacci had been dragged by her hair down the steps from the students’ balcony on La Noche Triste, replied: “What was she doing there?”

Race to Rio still on for Ukraine's Paralympians