We have entered a new phase of debate about privacy – about its sociological definition and ethical value vis-à-vis contemporary communications technologies and the behavioural changes connected to them; about the political value of privacy as a civil right, in the light of secret-service surveillance of the Internet and the securitization of the public sphere; about privacy as a consumer right, given Internet companies’ customer profiling and the marketization of personal data; and accompanying all of these, about the legal definition of privacy, how it should be protected by laws and how those laws should be enforced. 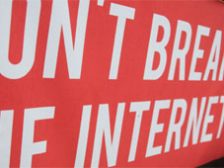 This Focal Point represents a cooperation between Eurozine and the Fritt Ord Foundation.

Are ad-blockers killing the media?

In an exchange dealing with critical issues of both sustainable media strategy and privacy, Matthias Streitz, managing editor of Spiegel Online in Germany, argues that ad-blockers merely aggravate the current crisis in which the media finds itself; while Richard Tynan, technologist for Privacy International, insists that people have a right to protect themselves and their data.

We’re actually entering an era where censorship becomes harder and privacy easier, says Jamie Bartlett. At the same time, we need a strong, publicly supported intelligence architecture. But in a post-Snowden world, the intelligence agencies must become more rather than less open.

Toward a politics of information

A conversation with Luciano Floridi

Privacy and identity are two sides of the same coin, argues Luciano Floridi. And yet, paradoxically, western governments are now eroding privacy in the interests of their own self-preservation. However, collecting data first and asking questions later is not a policy, says Floridi; it’s an affront to one of the foundations of liberal democracy.

Security versus freedom: A misleading trade-off

In the wake of the technological revolution that is the Internet, writes Ilija Trojanow, principles of self-organization and collaboration might be expected to replace established hierarchies and concentrations of power. Instead, the technologies of surveillance now available to states have never been more intrusive.

Taking on the giant

When a group of claimants in the UK took on Google for invasion of privacy, they had little idea that the case would become a landmark in the fight to tame the Internet giant’s intrusion into our lives on the Web, writes Judith Vidal-Hall.

Parading under the banner of a common front for freedom, governments worldwide have embarked on a security clampdown whose political fallout could be more damaging than the threat it seeks to banish, writes Simon Davies.

What is there to lose?

Friendship enables us to relax the rules of privacy we need in other types of social relationship. When friendship goes online, however, controlling privacy becomes more problematic. Are social networks causing a change in friendship as such, and if so, should we be concerned?

Edward Snowden and the control of power

The Snowden revelations revealed just how far some states had departed from the guarantees of privacy enshrined in the human and civil rights agreements of the post-war era. The European Union can play the central role in setting enforceable data protection standards internationally, however resisting the logic of surveillance also depends on pressure from society, writes Peter Schaar.

Smart tales of the city

The smart city industry is continually conquering new terrain. But as the global rollout of the digital electricity and gas meter (smart meter) proceeds apace, Elke Rauth discerns a project that shows disdain for the private sphere and puts the intelligence of governments and city-dwellers to the test.

From the Eurozine archive | In the context of renewed disquiet with Facebook and the data security of its users, we republish this prescient analysis by media scientist Ramón Reichert of how the big data generated by social networks is creating a meta-knowledge based upon an asymmetry of informational power.

The convergence of online policing and security with customer profiling and traffic filtering means that rights of privacy need to be seen in connection with freedom of communication and information. The principle of net neutrality serves this composite claim, explains the director of European Digital Rights Joe McNamee.

The US is exerting heavy pressure on the EU in its negotiations on the Transatlantic Trade and Investment Partnership (TTIP) to waive legislation placing restrictions on data-sharing with third countries. The Trade in Services Agreement (TiSA), which would succeed the GATS agreement, goes even further in hollowing out EU privacy law. To abandon localized data protection arrangements in the EU would be to surrender fundamental rights to economic interest. Political scientist Ralf Bendrath explains.

Edward Snowden and the new era on Earth

The worldwide spying operation is about more than security and counter-terrorism; rather, it is a part of a broader strategy aimed at controlling global information, writes political scientist Elmar Altvater. Opposition needs to grasp the geological significance of the planetary data theft.

The EU’s response to the NSA scandal, a recent landmark European Court of Justice ruling and the European Parliament’s rejection of ACTA: all developments, argue Amandine Scherrer and Jef Huysmans, that show the EU remains key to achieving an Internet commons.

The net is tightening

One of the most important and ominous aspects of the NSA scandal is the secretive essence of the system, writes Ilija Trojanow: transparency is clearly the biggest enemy of the alleged guardians of freedom. This much Trojanow now knows from personal experience.

Cooperation between the communications industry and governments creates unprecedented opportunities for surveillance. Lets not repeat the mistakes of the past and allow companies to assume that users are uninterested in what happens to their data, urge Gus Hosein and Eric King of Privacy International.