‘New Eastern Europe’ focuses on the situation in Donbas: why, six years after the start of hostilities, western Europe still needs to be reminded that Putin is waging war against Ukraine. Also, insights into the escalation in Russian–Polish memory wars. 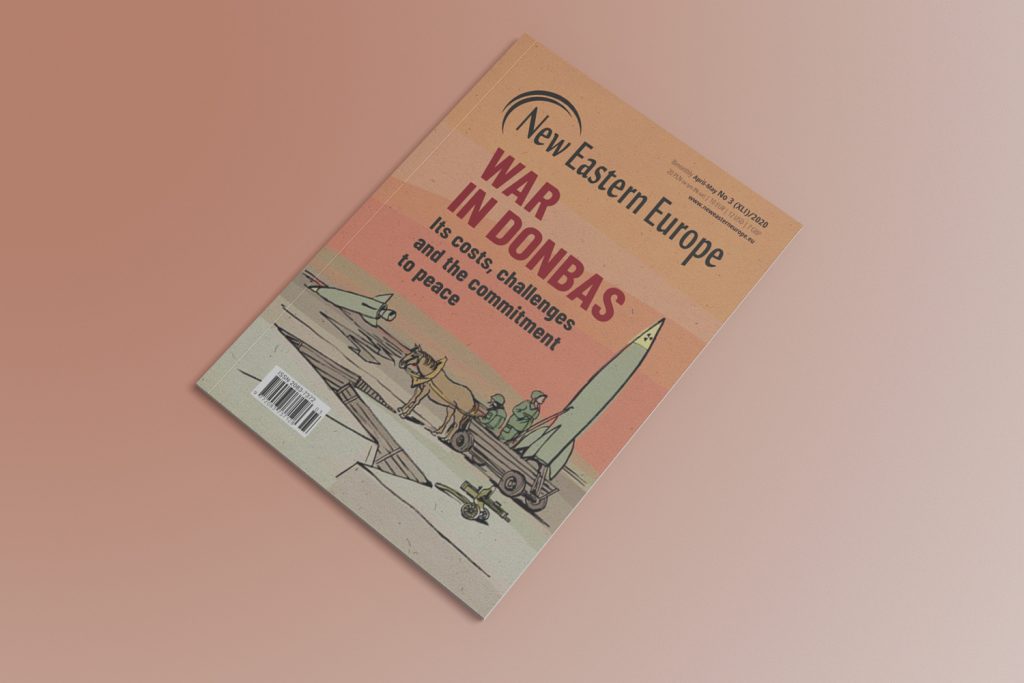 Seventy-five years after the end of WWII, the Kremlin is conducting a systematic campaign of historical revisionism. That in itself is nothing new. However, the conflict between Russia and Poland over responsibility for the outbreak of the War that flared up at the end of 2019, and which was reignited in February 2020 at the Yad Vashem World Holocaust Forum, signal ‘a new level of aggression in Russian historical propaganda’, says Ernest Wyciszkiewicz.

Not only that, according director of the Polish–Russian Centre for Dialogue and Understanding in Warsaw: Poland has become the chief enemy, with Russia exploiting clichés about Polish antisemitism and exaggerating the significance of the Polish annexation of the Zaolzie region of Czechoslovakia in 1938.

So why is Poland in particular now being targeted? According to Wyciszkiewicz, there are various reasons. First, because of the Polish government’s ‘de-communization of public space’ since 2018, which has involved the removal of Red Army monuments — a sacrilege in the eyes of Russia. Second, because Poland has become a frontrunner in countering Russian disinformation in the European Union. And third, because Russia is seeking to exploit what it sees as Poland’s weakness in its conflicts with the rest of the EU.

‘If the Molotov-Ribbentrop Pact and the Soviet invasion of Poland on 17 September 1939 are presented as unavoidable, we are getting close to justifying the use of force as a legitimate form of foreign policy today,’ argues Wyciszkiewicz. ‘This is why this historical debate matters: not only because we should all somehow try and reach the truth, but because it can have practical implications on how the current regional security situation develops.’

The latest issue of New Eastern Europe was launched with a live-streamed event: a conversation between authors and editor Adam Reichardt.

Ukraine: Former German Green MEP Rebecca Harms discusses the ‘alarmingly palpable confusion sown by Moscow’ in western Europe, where, six years after the start of hostilities, ‘it still needs to be made clear that Putin is waging war against Ukraine’. The desire for peace played a major role in Volodymyr Zelensky’s success in the presidential elections, but the ‘majority of Ukrainians do not want peace if the price to be paid is submission to Putin’s conditions’.

Donbas: ‘To stop the fighting’ was Zelensky’s main slogan during the 2019 Ukrainian election campaign, but his calls for peace hid ‘a lack of understanding of the situation on the ground’, writes Hanna Shelest. Only in Donbas have the president’s slogans evolved into more substantial plans for a ceasefire, social reconciliation and political reintegration. The undeniable necessity of solving humanitarian issues ‘is not an excuse for a lack of vision and conflict management strategies’.

Published 7 May 2020
Original in English

The many names of Chernovtsy in Ukraine attest to the tumultuous military and political history of Europe, borne out in cultural and linguistic competition, conflict and compromise in literature, music and art. What traces of this past can still be seen in the city today?