Tearing down the ivory tower

Abusing the COVID-19 crisis to close the 'wokest' university

It took a while for even the faculty to realize that the Istanbul Şehir University has effectively been closed down. It had stood its ground against Erdoğan’s interventions for years, but the pandemic served as the perfect opportunity for a swift and silent takeover. Now the same can happen to any of the other independent universities in Turkey.

Since rising to power in 2002, Turkish president Recep Tayyip Erdoğan has imprisoned scores of reporters and NGO leaders, closed magazines and television stations, banned democratic rallies and pride marches, annulled election results, shut down Twitter, YouTube and Wikipedia, and forced Netflix to remove a gay character from a Turkish rom-com. But never before has he seized control of a whole university, forcing all its eminent staff to resign, taking over their campus, libraries and other academic properties, and cutting bursaries of its Erasmus students to silence dissenting voices.

On 30 June, keeping his promise to ‘get rid of Turkey’s opposition viruses’ while fighting Covid-19, Erdoğan cancelled the operating licence of Istanbul Şehir University, a prestigious university founded in 2009 that became an intersection point between Marxists, liberals and Islamists.

Şehir’s founding principles were established through talks with the country’s top intellectuals: Halil Berktay, an expert on the Armenian Genocide, the Harvard historian Cemal Kafadar, and two dozen others. Bilim ve Sanat Vakfi (Science and Arts) – a foundation co-established by Ahmet Davutoğlu, a professor of international relations who served as Turkey’s penultimate prime minister before the position was abolished – administered Şehir for a decade, hiring seasoned scholars of Ottoman culture, politics and literature who held decolonising views and amassed large social media followings. But nowadays Davutoğlu’s foundation is demonised, and its administrators are intimidated into silence.

Fatih Altuğ is a leading scholar of Turkish literature who ran Şehir’s Comparative Literature Centre for more than a decade. He was 32 when he joined the college. Its promise to be a ‘democratic, pluralist institution not ruled by any political group’ attracted him. The financial support of Murat Ülker, a leading industrialist and a founding member of Bilim ve Sanat Vakfi, was also encouraging. Before its closure, Şehir was the third highest salary-paying university in the country, after Koç and Sabancı, private colleges owned by two of Turkey’s most prosperous tycoons.

Şehir’s multiculturalist agenda prioritised public intellectualism, and the school’s roster featured scholars who were outspoken about Kurdish rights. Altuğ describes their student base as ‘children of mostly conservative families who were very open to liberal or leftist forms of conservative thought’. Students enrolled at Şehir were among the best in the country, chosen from among the 2,000 highest-scoring pupils in the country-wide university exam. 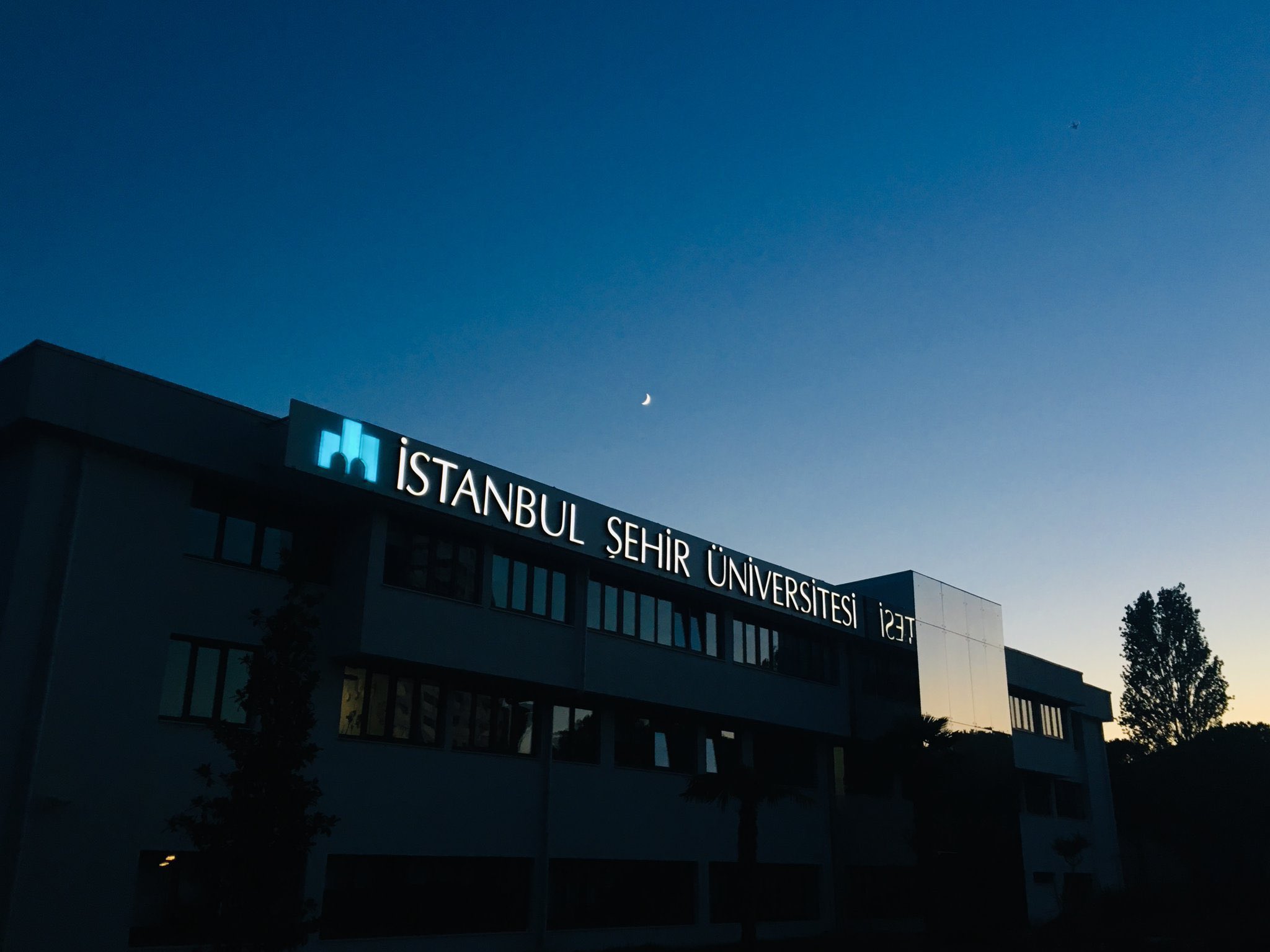 Sehir University under the crescent moon, the facade still displaying its original name in October 2020. Photo by @nosehir on Twitter. 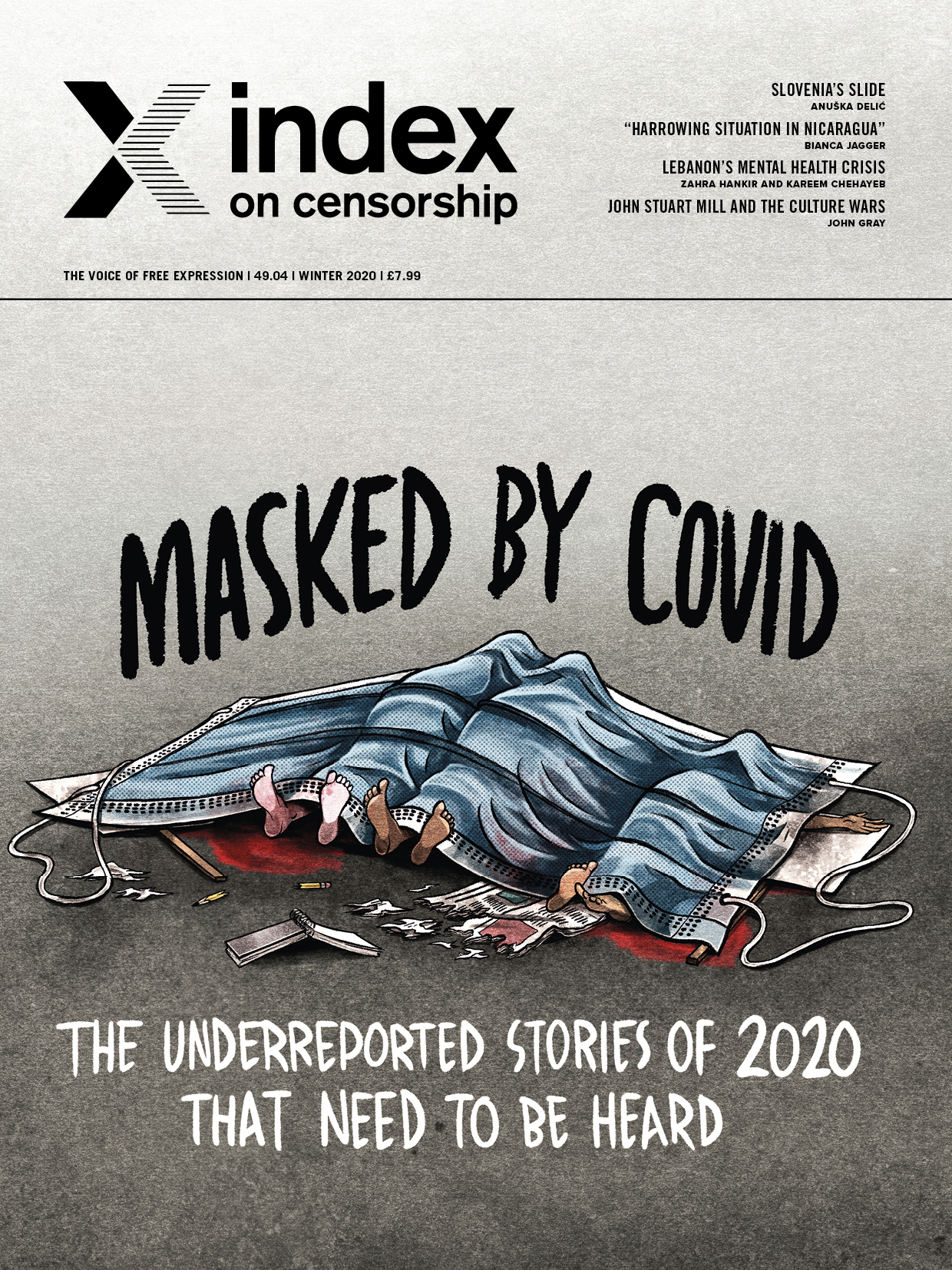 This article first appeared in the Winter 2020 issue of Index on Censorship magazine, which looks at how Covid-19 has been used by authoritarian leaders to bury stories they don’t want the world to hear about. Click here to find out more about the latest issue.

Şehir students, too, were fearless. One studied the representations of the Armenian genocide in the Kurdish novel. ‘It was a doubly dangerous theme,’ said Altuğ, ‘but we faced no problems.’ Another student wrote a thesis on Zaven Biberyan and Ahmet Hamdi Tanpınar, discussing an Armenian and a Turkish writer’s representations of the Armenian genocide. ‘We heard nothing from the Higher Education Council. Perhaps they are not yet aware of the contents of these theses,’ Altuğ added.

But the scholar, now 43, is visibly shaken while recounting what happened next. After Erdoğan fired Davutoğlu and abolished the prime ministerial post to build his one-man regime, Davutoğlu founded The Future Party and everything changed. By December last year, the former prime minister had become the most vocal critic of Erdoğan’s regime. Having amassed a wealth of insider information about Turkey’s autocratic system, Davutoğlu quickly became a hate figure in the pro-government press. Soon, Şehir staff found themselves in the eye of an anti-Davutoğlu campaign.

‘They called us „untrustworthy liberals who hide out at Şehir”’, recalled Altuğ. ‘We were called „intellectuals who poison conservative kids”’ One nationalist labelled Altuğ and his Şehir colleagues ‘orientalist zoologists who look at Turkish literature from a foreign perspective’. In response, they changed their WhatsApp group’s name to ‘Orientalist Zoologists’.

The government chose a curious moment to finally close Şehir: it did so during the Covid-19 crisis. Its takedown of the college, swift and methodical, was a lesson in authoritarianism. News of Şehir’s demise was drowned out among news about the pandemic, becoming one of the most under-reported stories of 2020 despite its enormous implications. 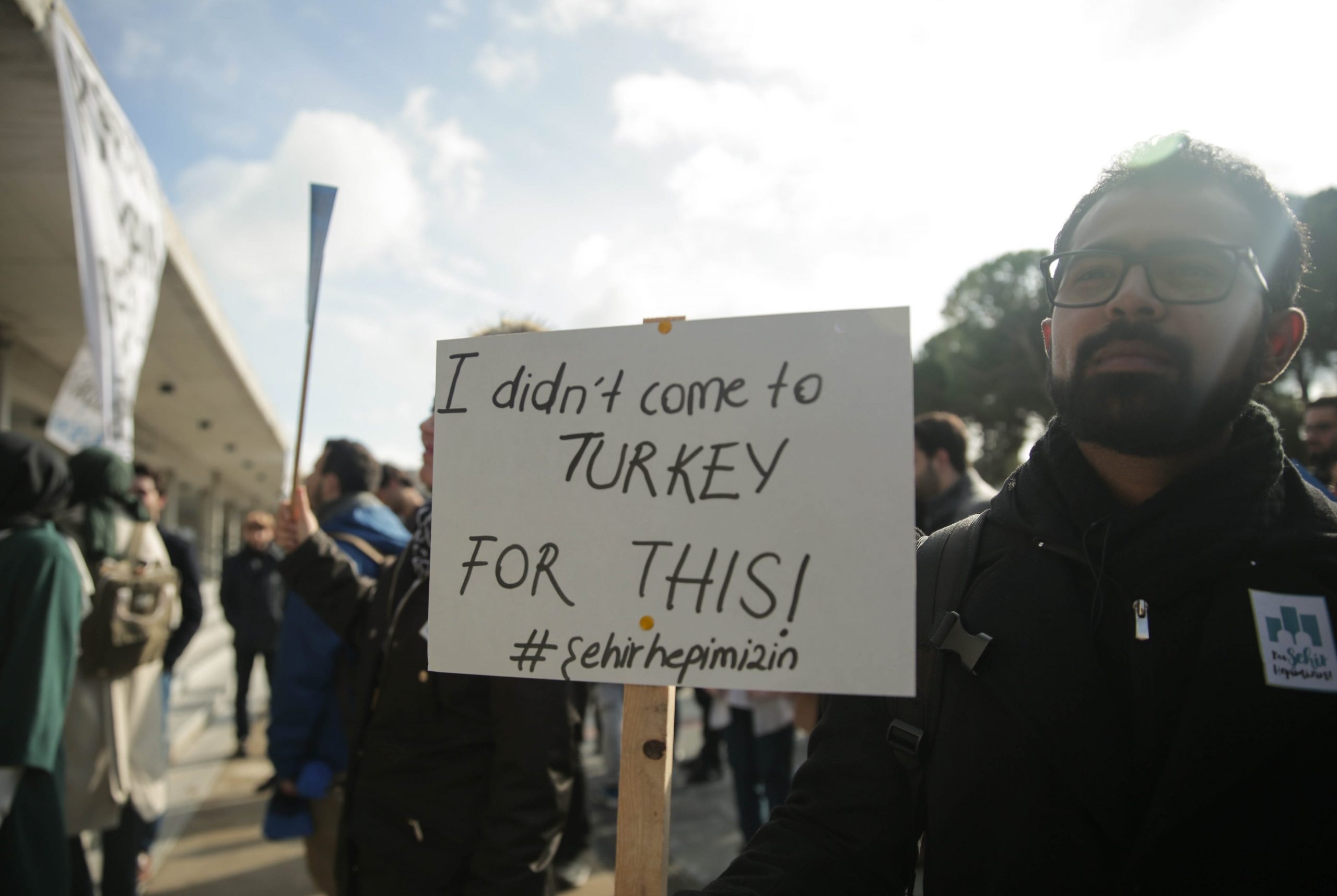 International student protesting outside of Sehir University. Photo from @sehirhepimizin on Twitter.

After appointing an administrative caretaker for the college, Erdoğan published a decree in April which made it possible to close Şehir, as well as other private colleges, immediately instead of waiting for three years after a takeover as the law demanded. Altuğ had a 9am class on the day the takeover decree was announced. ‘Students were trying to get used to online education. Professors were trying to survive financially and not to reflect Şehir’s difficulties to students. I talked with my class for 15 minutes about the situation. I felt I had to keep on doing my job properly despite our ordeals.’

But that became impossible as Şehir stopped functioning. Food was no longer served in the school’s cafeteria. Students on Erasmus scholarships couldn’t receive their money. Altuğ went unpaid for three consecutive months. Online education and Covid-19 made it easier to ignore the physical reality for a while, but after Ömer Çelik, vice-president of the ruling Justice and Development Party (AKP), announced that the school’s operating licence was cancelled following an AKP central committee meeting, Altuğ realised he was ‘in stark denial of the situation’. Closure was what the state wanted, and there was no escape from it.

In the summer, soon after the lockdowns lifted, he visited the school one last time to collect his belongings. ‘I had 20 boxes of books at my office,’ he said. ‘When I visited the campus in June, the security guards working at the college for a decade had been replaced by guards from a state college. After I entered the school premises, they accompanied me to my office. They waited there, taking notes about what I did inside, which boxes I took. This was one of the saddest moments of my life. This place, [which] once I considered home, I could now only enter by a guard shadowing me.’

Under its caretaker, Şehir has turned into a ghost town. When Altuğ took a final walk on the campus, he saw that the grass was overgrown because gardeners had not mown it. In the past, there had been great animal diversity on the campus with lots of cats, dogs and birds. Now there were just a few stray dogs. In the corridors, there were photocopied papers scattered on the ground. ‘It was so sad to see it so deserted,’ he said.

In response to the closure, a group of students organised a protest as early as April. But when they came to the campus that month they were refused entry to Şehir. Şuhedanur Hacıalioğlu, a professional archer who plans to have an academic career in literature, was among those who protested at the university’s gates.

‘The conflict played out during my final year as an undergraduate,’ she told Index. ‘Once we understood its nature we began raising our voices on social media. As we did so we noticed how all other voices had sunk into silence.’ Hacıalioğlu and her fellow graduates tried to reach journalists to tell their stories, but intimidated reporters chose to ignore them. The platform she joined, Şehirhepimizin (Şehir Belongs to Us All), held meetings and planned marches and issued political statements. ‘Because I’m a literature graduate, I helped write the first statement. We went to the parliament and talked with MPs. We held our protest march. We just wanted to defend our school and raise our voices against injustice.’

According to Altuğ, Turkey’s academic community doesn’t yet realise the significance of the decree which makes seizing universities easier. ‘It was created specifically for Şehir but it may help take over all private colleges in the country,’ he said. ‘The calamity has not yet been comprehended. Even if it is his own son’s university, the president can find economic or other excuses to take over a school overnight.’ He warns that if private colleges such as Koç, Sabancı and Bilgi rattle the government just one bit, they will face a similar end.

Today, Bilim ve Sanat Vakfi plans to take the case to the European Court of Human Rights, but with Erdoğan’s autocratic rule still in place, there seems little prospect that Şehir will be returned to its owners. ‘This can happen to any school from now on,’ Altuğ said. ‘And what we experienced will set the agenda and the tone for academic life in Turkey in the near future.’