Lebanon’s uprising despite the pandemic

The corona crisis acts as a double-edged sword for Lebanese protesters: it reinforces the grievances that have fuelled the uprising, but it also provides an opportunity to political elites to bolster their support, offering welfare for political loyalty.

The recent protests in Lebanon have shown that the Lebanese, to an increasing extent, are willing to defy the lockdown in order to express their anger with the country’s political and financial elites. But the coronavirus also provides an opportunity for these same elites to put their strongest survival tool into work: the exchange of welfare for political loyalty. 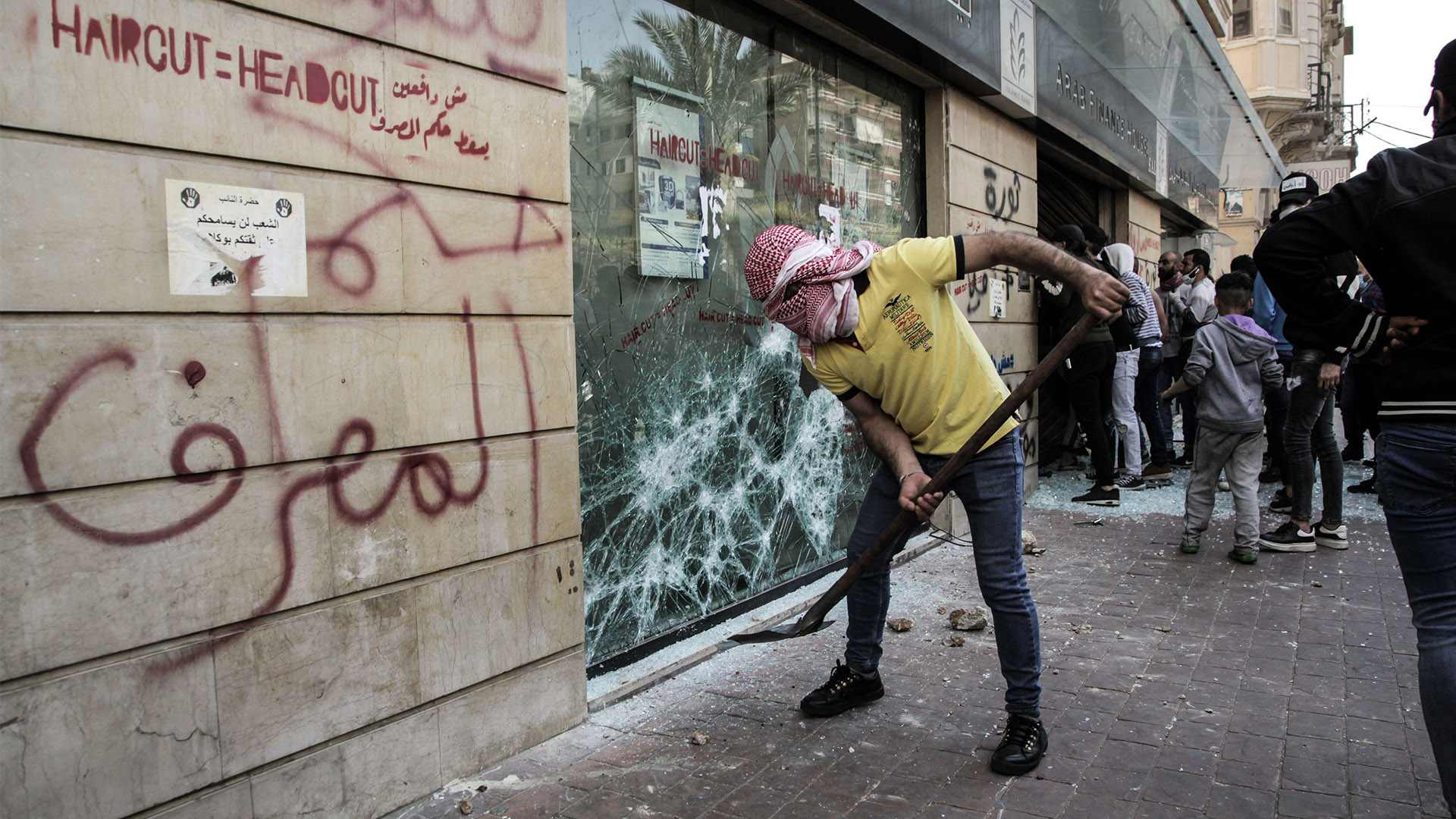 Protesters attack a branch of the Arabic Bank during riots that broke out following the death of a protestor shot by the army during protests triggered by economic collapse the previous night. Elizabeth Fitt / Alamy Stock Photo.

On 15 March, the Lebanese government declared a medical emergency to fight the coronavirus. Eleven days later, a curfew was introduced, which banned people from leaving their homes between 7pm and 5am.

Since 17 October last year, Lebanese had been taking to the streets in a nationwide protest wave. By February, weekly marches were still held in Beirut with some hundred attendees, demonstrations still erupted across the country, and about 50-60 activists had remained camping in the centre of the capital. But the intensity of the protests was slowing down.

When the coronavirus hit Lebanon, the police cleared the streets, and the security forces pulled down the tent camps in Beirut and in Tripoli, and for a moment, it looked as if the virus could put the uprising on hold. But things look much different now. While the lockdown has led many people to stay away from the streets, the past weeks have proved that the coronavirus crisis has not at all been a deathblow to the protests.

No sooner had the government imposed the lockdown back in March than small groups of protesters poured into the streets across the country. In April these demonstrations have increased in intensity and scale.

On Friday, 17 April, the country saw the first large nationwide protests since the lockdown was implemented. Several hundred people took to the streets to mark the six months anniversary of the uprising. In Tripoli, protesters refused to leave when the curfew came into effect. Few days later, on 21 April, parades of cars drove across the country, as the parliament convened for the first time since Lebanon went into lockdown. On 23 April, people gathered in front of the Lebanese Central Bank in Beirut, while social media channels reported that protesters had blocked highways at several locations.

The protests took yet another turn on Sunday, 26 April, when the 26-year old Fawaz Fouad al-Samman was shot by soldiers as he was protesting in Tripoli and died as a result on the following day. After that incident, protests were held almost daily in several areas of the country, including Sunday 3 May, when people from around the country drove to Tripoli to commemorate Al-Samman.

Reports from the recent protests highlight two main reasons why Lebanese take to the streets in defiance of the lockdown. The first is a desire to show perseverance; that the coronavirus will not stand in the way of their revolution. The second is a need to defend their basic livelihood. In Beirut, protesters yelled ‘We want to eat, we want to live.’ In Tripoli, Lebanon’s second-largest city, a similar message is heard: ‘Dying from the coronavirus is better than starving to death’ Tripoli was one of the first places where protesters took to the streets under the lockdown, and it has remained one of the most active protest sites over the past weeks. This is hardly surprising. The city is one of Lebanon’s poorest areas, and the coronavirus crisis has thrown many of its most vulnerable residents into a struggle for survival. Many workers have refused to close their shops and clashed with security forces as a result. Unemployment has risen, and those who still work, are only earning a fraction of what they used to.

A crisis in a crisis

Lebanon is already struggling with high poverty levels. Exactly how high, remains unknown. In 2018, the national poverty rate was 27.4%, but this number is based on survey data from 2011/12, and poverty projections are unavailable due to the past years’ structural changes, particularly the refugee influx from Syria. What remains certain, however, is that the number of poor people in Lebanon – refugees as well as Lebanese nationals – grows by the day.

In fact, it is most accurate to describe the coronavirus as the latest development in an ongoing economic collapse; a crisis in a crisis. The value of the Lebanese Pound, for example, has been dropping for a long time. But with the coronavirus crisis it has taken an unprecedented fall. At the beginning of the year, dollars were unofficially exchanged for 2000-3000 Lira, far below the official pegged rate of 1,507. Now the price of a dollar is approaching 4,000 Lebanese Pounds.

Lebanon’s Social Affairs Minister, Ramzi Moucharafieh, has estimated that some 75 percent of the population is now in need of assistance. At the same time, the government has been struggling to meet this need. Recently, the cash assistance program that was supposed to distribute a one-time payment of LBP 400,000 to vulnerable families has been postponed due to ‘errors’ in the list of families, which were selected to receive the help.

In short, the coronavirus crisis pushes the Lebanese economy further down the path it was already on, and the same can be said regarding its effect on the October uprising. Months before anyone knew that a pandemic would paralyze the world, the Lebanese protests had been changing in character, reflecting the deteriorating social and economic conditions in the country. The demonstrations no longer looked like the mass celebrations that took place in October, and from which iconic pictures went worldwide, showing DJ Madi Karimeh playing to a crowd of thousands of dancing protesters from a balcony in Tripoli.

While Lebanon’s economy kept crashing and banks implemented stricter measures of capital control, the protests turned increasingly aggressive, culminating in large clashes with the Internal Security Forces in Beirut in January. As some of the people who were present at these clashes argued: ‘We gave them three months of non-violence. Now we’re out of patience’.

Pictures and footage from the recent weeks clearly show that the protests keep turning more aggressive. On 28 April, in what has been dubbed Lebanon’s ‘night of the Molotov’, protesters used Molotov cocktails to set banks on fire in several cities, including Saida and Tripoli.

Many of those on the frontlines belong to the poorest and most marginalized groups in Lebanon. Since its beginning, analyses of the 17 October uprising have highlighted the large participation of the poorer segments of society, which have been less present in previous anti-establishment protests.

‘The stronger the grievances, the larger tendency to protest’ is a phrase from classical theories about social movements. Given that the Lebanese – and especially the poorest groups – have been facing increasingly strained conditions under the coronavirus crisis, it could seem likely that this phrase will become reality in Lebanon. Yet, there are also factors pulling in the other direction.

An opportunity for political elites

The Lebanese state is notoriously weak and fails to deliver basic services such as electricity, water, education and healthcare to its citizens. Instead, the main political parties in the country act as welfare suppliers, by offering hospital treatment, scholarships, and social assistance programs to their constituents in return for political loyalty.

With the coronavirus crisis, the sect-based political parties in Lebanon have been explicitly providing assistance to the needy and making sure it is known that they are the ones doing it. This includes for instance face masks with party logos. According to its spokespersons, Hezbollah has mobilized 25,000 people and dedicated one of its affiliated hospitals in Beirut to treating coronavirus patients. The organization has also rented another four disused hospitals and prepared 32 medical centres across Lebanon. The two major Christian parties, the Free Patriotic Movement and the Lebanese Forces, as well as the Druze-led Progressive Socialist Party, have sent disinfectant crews to the streets. And in a similar vein, former Prime Minister Saad Hariri, head of the Sunni Future Movement, announced that he will personally contribute LBP 100 million.

According to several analysts and activists, the coronavirus is creating an opportunity for Lebanon’s sectarian political parties to build up the support and legitimacy that was eroded by the October uprising. In a Middle East Eye article, for instance, Jamil Moawad, a lecturer in Politics at the American University of Beirut, argues that the parties are aiming to nourish and sustain sentiments of insecurity and vulnerability amid the pandemic in order to consolidate control over their respective areas.

The last weeks of intensified demonstrations have clearly given renewed strength to the protests and proved that many Lebanese are willing to defy the lockdown in order to express their anger with the country’s political and financial elites. As people were heard chanting: ‘Corona, corona, we don’t care about corona. Corona, corona, Riad Salameh (governor of Lebanon’s Central Bank) is corona.’

Nevertheless, the corona crisis remains a double-edged sword, seen from the perspective of the Lebanese protesters. On the one hand, it reinforces the grievances that have fuelled the uprising since its outset. On the other hand, these same elites are seeking to use the pandemic to bolster their support, by providing much needed health facilities and aid. While numbers in the streets kept rising, the majority of the Lebanese still stayed at home. As the country gradually opens up again, it remains to be seen which side of the sword has been the most forceful.

How public education reached its breaking point in Hungary