Responding to the Islamist terror in France and Austria, Blätter publishes contributions calling for a more critical approach to Islamism on the left: why secular Islam must wrest back cultural hegemony from militants in order to avoid complicity; and how left apologetics are rooted in delusions about an anti-capitalist alliance with fundamentalists.

In Blätter für deutsche und internationale Politik, Cinzia Sciuto argues that accusations of Islamophobia have served to suppress debate about the immediate threat posed by an exclusory form of Islam in Europe. Social and economic disadvantage and real racism cannot serve as an excuse for an anti-democratic and anti-secular ideology, Sciuto writes.

Although far less widespread than its integrative equivalent, exclusory Islam – i.e. an Islam founded on the rejection of majority society – succeeds in monopolizing the public discourse. ‘The visibility and the political weight of secular Muslims in western societies is still small. This means that much more conservative Islamic associations bring themselves into play and claim to be the representatives of all Muslims.’ Integrative, secular Muslims are complicit insofar as they accept this, argues Sciuto.

‘Social processes are always the result of interplay between structural conditions and subjective action. It is therefore essential that secular Muslims take part, become visible, demonstrate and begin to influence public discourse. It’s not about distancing oneself from something, but about claiming a public and cultural space that will otherwise be appropriated by more militant representatives, who are almost always more conservative and reactionary. It’s about cultivating the common good, about (re)gaining cultural hegemony, about taking responsibility, being part of a larger community.’ 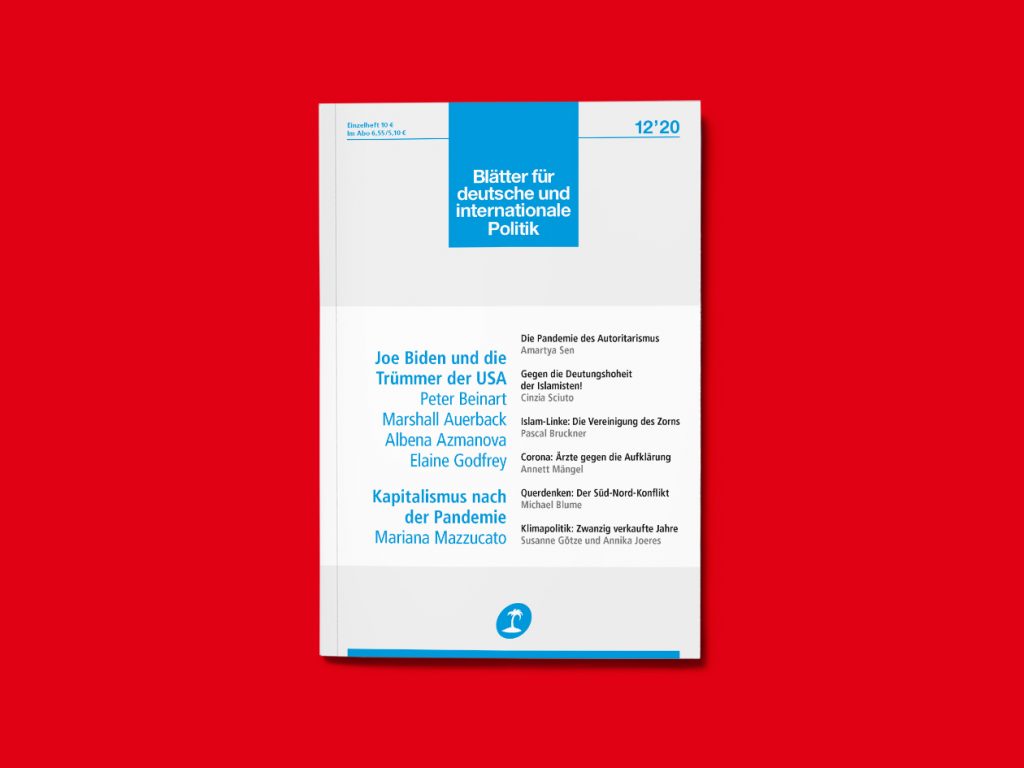 For Pascal Bruckner, it is the left that needs to examine its conscience after the latest atrocities. Bruckner accuses prominent French leftists including Alain Badiou, Michel Onfray, Edwy Plenel and Edgar Morin for deludedly imagining that radical Islamism stands with the left in opposition to capitalism.

‘For the left, solidarity with Muslims is solely another stick with which to beat bourgeois society, which they are unable to destroy. This shift within the left goes back to the overthrow of the Shah in 1979 and 1980, which was where the matrix for our current blindness originated.’

Today, according to Bruckner, class war is cloaked in a discourse of victimhood: ‘The murderers on the pavements were the ones who were traumatized, while the customers mown down in the bars were the privileged. The conclusion is obvious: that the victims were murderers without knowing it, and the murderers the unfortunate victims.’

Blätter editor Annett Mängel on the minority of doctors and scientists who play down the dangers of corona: ‘The idea that we have to “learn to live with the virus” is no answer to the current escalation of the pandemic … There is no way we can protect high-risk groups when we don’t all protect ourselves.’ And political scientist Michael Blume on why Germany’s corona debate is polarized not along East-West lines, but North-South ones: from Baden to Saxony, there is a deep-seated scepticism towards authority and science.