‘Blätter’ publishes a major new essay by Jürgen Habermas on the German-European dialectic: why Merkel’s volte face on the European Recovery Fund is a response to the delayed effects of German reunification. Also: Orbán’s hollow boast and the complicity of European conservatism; and Israeli women against Benjamin Netanyahu.

Parallels between the emergence of global capitalism after 1989 and the global economic crisis brought by the corona pandemic may seem far-fetched. But if Europe is to respond constructively to the latter, then in one respect a comparison proves instructive, writes Jürgen Habermas in a major new essay in Blätter für deutsche und internationale Politik.

In 1989, German unification and European unification acted as ‘communicating vessels’. Thirty years later, this connection is less obvious. And yet, new awareness of internal unification issues has forced German politics to confront its responsibility for the future of Europe, according to Habermas. Fear for the continued existence of the monetary union has prompted the German government to suddenly heed French appeals for closer fiscal cooperation. The European Recovery Fund ‘may introduce the first major spurt of integration since the Treaty of Maastricht’. 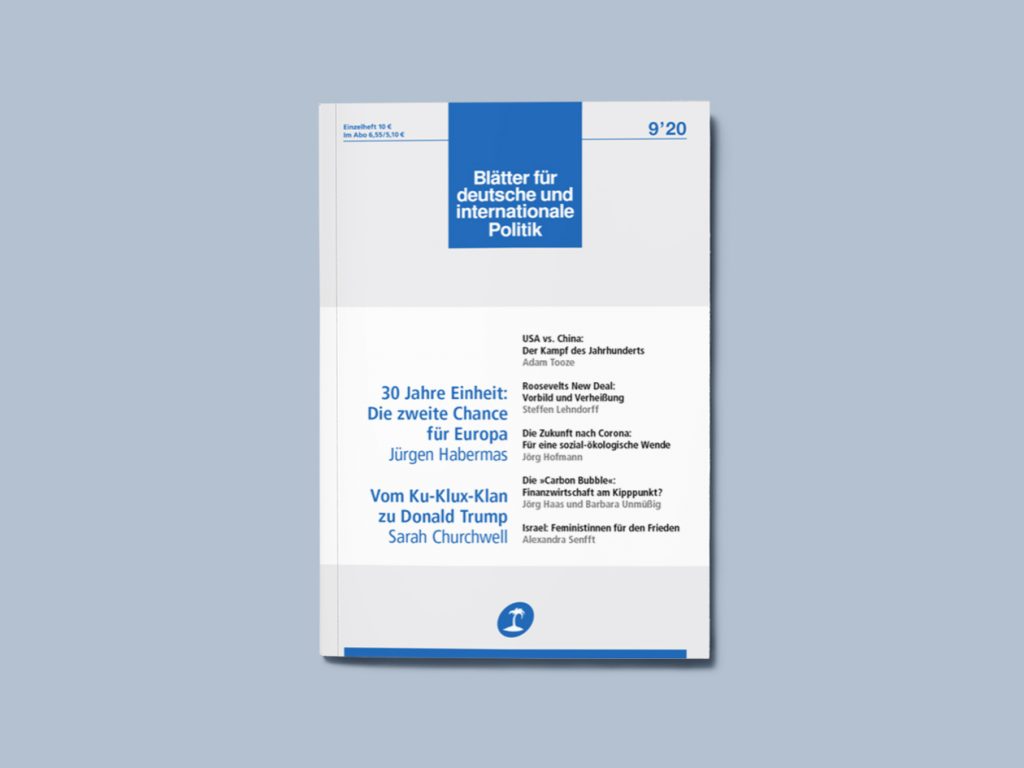 What has driven this volte-face from Merkel, ‘a deeply pragmatic, cautious, opinion-poll driven politician’? Not the polls alone, argues Habermas. Behind Merkel’s shift is a reaction to the shifting balance of power in Germany’s party-political landscape. With the AfD, a party now exists to the right of the CDU that combines Euroscepticism with ‘nakedly ethnocentric nationalism’.

Conflict between AfD and CDU came to a head in July 2020, when the AfD MEP Jörg Meuthen berated German support for the ERC using the very same arguments that the CDU has been employing to justify its austerity politics for the past decade. The challenge has prompted the CDU to readdress the problems resulting from reunification. This newly obtained historical distance, argues Habermas, is not a result of commemoration so much as ‘the polarization of political attitudes’ to the events of 89.

Hungary and the EU

Orbán’s boast about Hungary’s ‘success’ in removing rule of law commitments from the ERF deal agreed by the European Council at the end of July was not entirely wrong. Even though member states had in fact agreed on a clause making sanctions possible, the deal appeared as a concession. As Moritz Elliesen and Maximilian Pichl write, conditions for sanctions were weakened so that the onus for forming a majority now lie with Member States who support sanctions rather than those who reject them.

Regardless of whether and in what form sanctions for rule of law violations end up being passed – the Council resolution was rejected by the EU Parliament on these and other (ecological) grounds – they alone will be unable to halt Orbán’s authoritarian course. Part of the responsibility lies with the EU and above all the conservative parties in Europe, particularly Germany, who have failed to distance themselves clearly from Orbán’s ethno-nationalism and that of his imitators across Europe.

For weeks, thousands of Israelis have been protesting for the resignation of prime minister Benjamin Netanyahu. At the forefront of the protests have been women. Islam expert Alexandra Senfft portrays the central protagonists of this new feminist movement. For years, they have been fighting for equal representation on Israeli politics and against the militarization of society, which continues to take place to women’s disadvantage, particularly of Palestinian Israeli women.