Lest dissent seem easy from afar, ‘Index’ offers a global range of case studies showing ‘why and when we choose to censor ourselves’. Including articles on China’s CCTV culture, media dependencies in France, microchipping in Sweden, the crisis of Bulgarian journalism and much more. 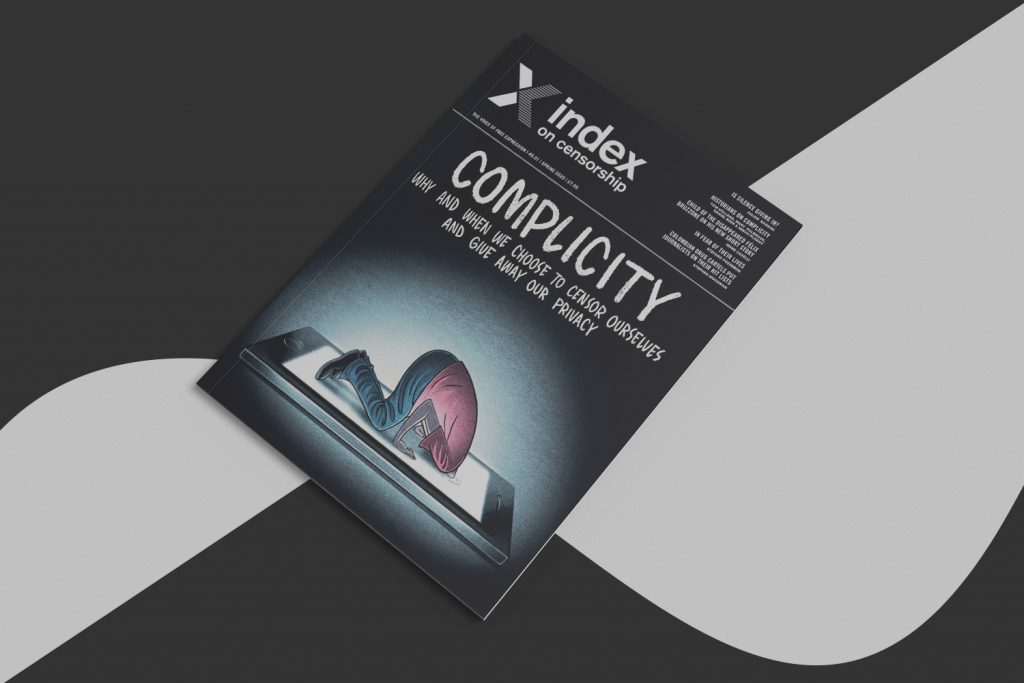 ‘When we are afraid, we are most at risk from the pressure that others might place on us not to speak out or criticize,’ writes Rachael Jolley in her editorial to the new issue of Index on Censorship — entitled ‘Complicity’. Lest dissent seem easy from afar, the issue offers a global range of case studies showing ‘why and when we choose to censor ourselves and give away our privacy’.

China: At the current rate, there will be 490 million CCTV cameras in China by 2021. The explosion has been accompanied by massive urban development, writes journalist Noelle Mateer. The government calls it ‘beautification’, but it is actually policing. As traditional districts are cleared and their inhabitants displaced, informal neighbourhood-watch systems have been replaced by CCTV. Yet Chinese citizens seem complicit in this process. Although demand for consumer video devices does not exceed the US market, in China private security tech has surged alongside state surveillance.

France: French journalism is famous for its cosiness with power. However, the system of special access has never seemed more problematic, writes Jean-Paul Marthoz. Controversy blew up in September 2019 when, in Le Monde diplomatique, the investigative journalist Pierre Péan accused a younger generation of colleagues of being ‘accomplices in a drama that they did not control’.

‘Journalism inevitably implies transactions and compromises. But complicity, whatever form it takes, is a scourge for journalism. It deprives the public of part of the facts that it needs to forge its “informed consent”. When it is paired with conformity and the dominant narrative, it marginalises dissident voices who may be closer to the “truth”, or may at least bring a minimum of balance in a story.’ Only 25 per cent of the French public thinks that journalists are independent, while the Gilets jaunes have turned media-bashing into a ‘contact sport’.

Also: Moa Petersén on why ‘microchipping’ — having ID chips implanted under the skin — has taken off in Sweden, and whether it is as ominous as it sounds (probably not). Victoria Pavlova on how political influence in Bulgaria’s media has seen high-profile journalists pushed out of their jobs (a topic also recently covered in Eurozine). And family discussions in China and Turkey on how taboos or censorship have changed over three generations (freedom of speech in Turkish universities; sex and relationships in China).

This article is part of the 6/2020 Eurozine review. Click here to subscribe to our weekly newsletter, to get updates on reviews and our latest publishing

Talk of a new Cold War between the US and China emphasizes military capacity and economic prowess. Warrior discourse presents a mono-dimensional situation in which conflict is inevitable. But couldn’t China’s stratospheric rise be better understood and handled by looking at the cultural complexities behind its advances?