Our US associate Public Seminar looks into the most significant social unrest since the civil rights movement. On white ‘moral credentialing’; the making of Black Lives Matter; and the endorsement debate dividing the Democrats. 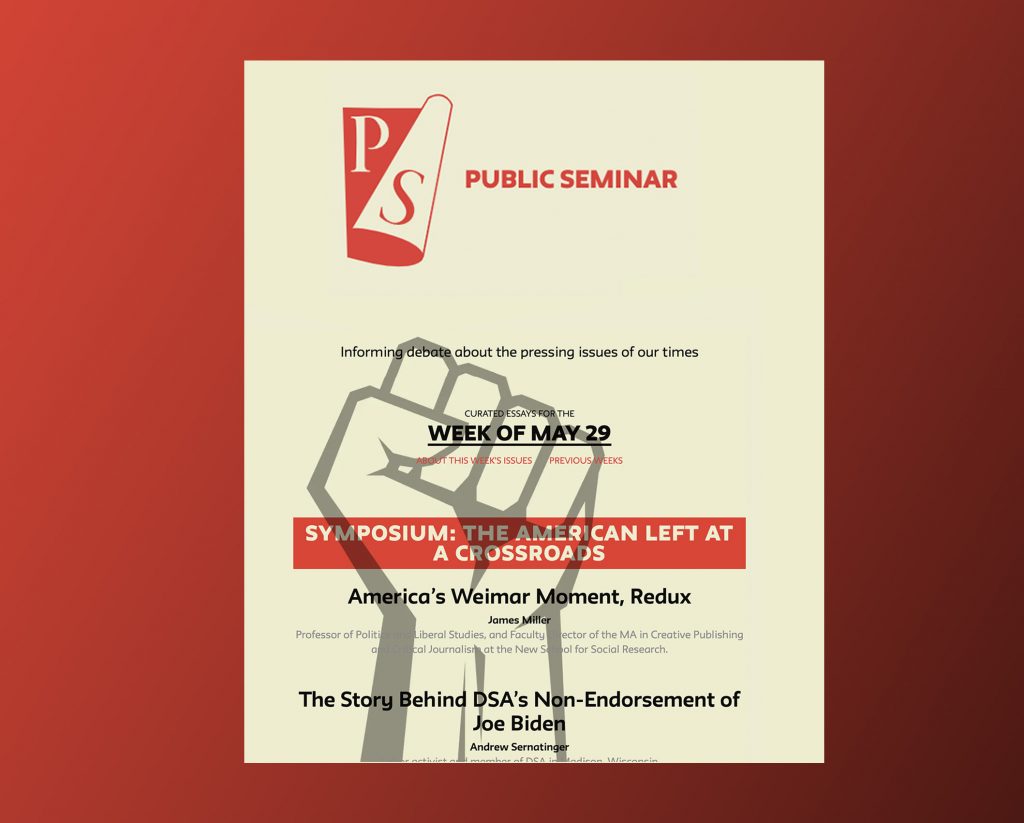 Claims that the protests have been incited by the radical left have a history, writes Natasha Lennard: ‘The suggestion that oppressed black communities cannot and would not themselves rise up is as racist now as it was when the Ku Klux Klan blamed communists for inciting black people’s organized revolts against white supremacy.’ The uprising is ‘both exhilarating and inspiring,’ writes Lennard, ‘the most energetic and potent social eruption I’ve experienced, which shows no signs of stopping’.

If Donald Trump’s tweet about Antifa was intended to polarize the conflict even further, then it had the desired effect. But, as Musa al-Gharbi writes, white liberals need to be aware of a more insidious form of racism. ‘Moral credentialing’ — in this case, explicitly denouncing racism — can increase the likelihood of white people acting ‘in ways that favour other whites’, al-Gharbi argues.

‘These exercises in ritual purification do precious little to help people from historically marginalized or disadvantaged groups. They don’t even meaningfully raise awareness, as they circulate primarily among those who are already the most “aware”. More than anything else, these campaigns are a form of catharsis for white elites. With each op-ed and retweet, they reassure themselves that they are “different” from those other whites, the ones who are ignorant, unenlightened, fearful of diversity.’

In an excerpt from his book The Making of Black Lives Matter, political philosopher Christopher Lebron details the deaths of two black women as a result of police violence, in order to make a broader point about the ‘historically and socially complicated relationship between race and gender’.

After Bernie Sanders lost the Democratic nomination, the Democratic Socialists of America resolved not to endorse Joe Biden. In a special issue, Public Seminar airs both sides of the argument. DSA activist Andrew Sernatinger, who submitted the non-endorsement motion, explains the strategic rationale. And Robert J. S. Ross, founding member of the Students for a Democratic Society (SDS) in 1960 and organizer of An Open Letter to the New New Left from the Old New Left, explains why supporters of the Sanders Campaign need to join ‘the Anti-Trump Front’.

This article is part of the 10/2020 Eurozine review. Click here to subscribe to our weekly newsletter, to get updates on reviews and our latest publishing