Fragments from a broken mirror

Pessimists fear that the Trump phenomenon has not so much derailed American democracy as revealed long-standing problems in the system itself. But if the causes of the crisis are apparent, prospects of a way out are lacking in a country bitterly divided.

The great baseball player/philosopher Yogi Berra said it best: ‘It ain’t over till it’s over.’ It doesn’t appear to be over.

Frankly, nobody knows when it will be. Some say December 14, when the Electoral College, America’s archaic voting system, is scheduled to declare a winner of the 2020 election – if it can. Though Biden’s win appears to be rock-solid, certain manoeuvres in state legislatures and the courts could freeze the procedure in its tracks.

Others say it won’t be over till January 20, when the new president is sworn in. But if Trump holes up in the White House, and the White House is where Biden is supposed to live, will Biden call out the National Guard to evict Trump from the nation’s most luxurious public housing facility?

Pessimists fear that it will never be over – that the Trump phenomenon has not so much temporarily derailed American democracy as revealed long-standing problems in the system itself, and profound distortions in the way Americans look at themselves.

So, in the spirit of the country’s present mood of high anxiety, here are some thoughts about America’s recent past and immediate future. Given the chaos and uncertainty, fragments from a broken mirror are all that anyone can honestly offer.

Over the past four years, Trump and the Black Lives Matter movement worked hand in hand to debunk the notion of the US as a beacon of moral purity – Jonathan Edwards’s ‘city on the hill’, which Ronald Reagan with Hollywood hyperbole amped up to a ‘shining city on a hill’. 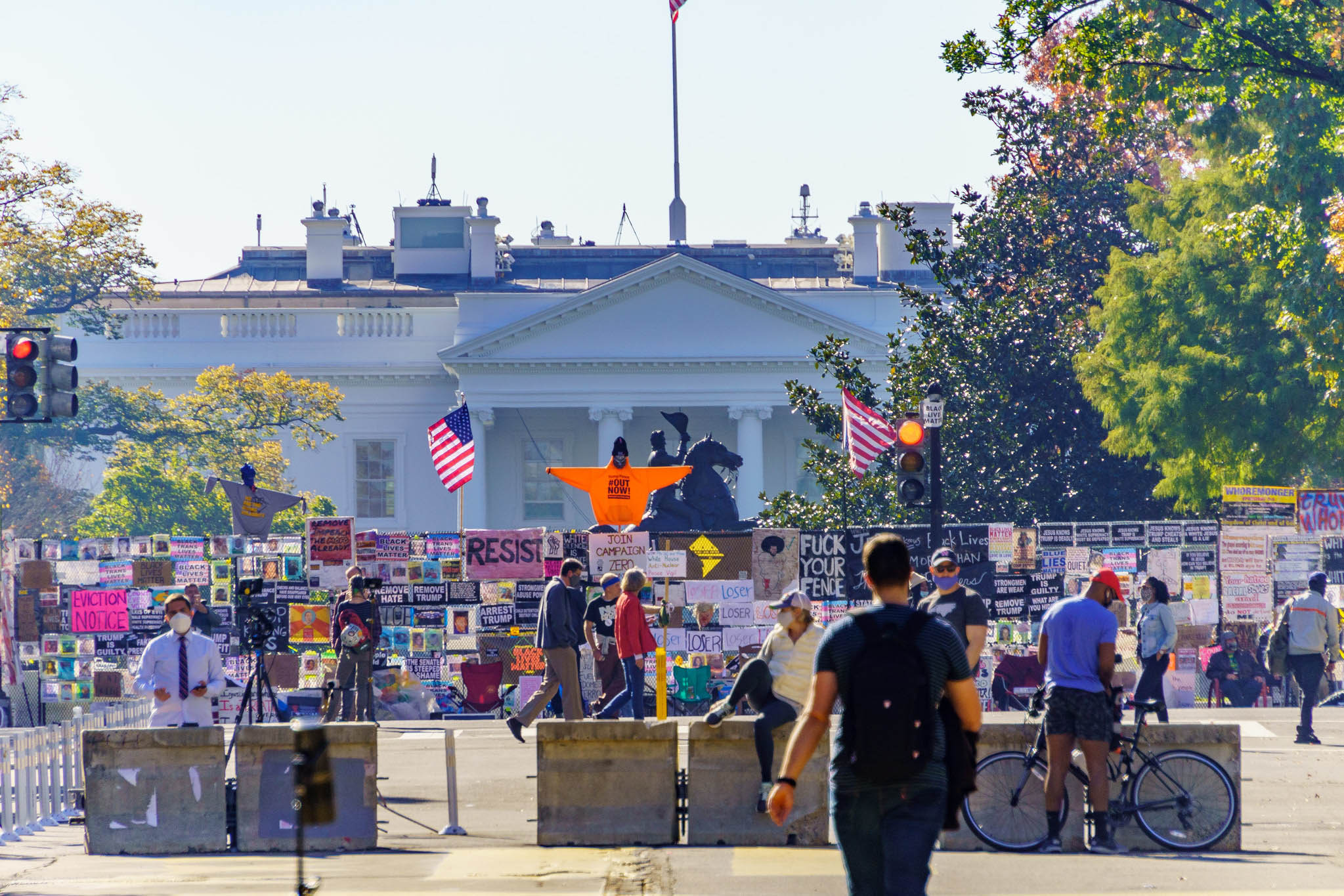 In front of the White House, hours before Joe Biden is declared the winner of the 2020 Presidential Election
Photo by Ted Eytan from Flickr (CC BY-SA 2.0)

Trump’s contribution was a grotesque stress-test of the system, pushing it to extremes in all directions while demonstrating what every demagogue knows in their gut: that no political system can function by laws alone. In Trump’s case, he laid bare a set of attitudes that have always been implicit in the American psyche – that ‘freedom’ means the right to cling to a narrow set of personal interests and disregard everyone else; that there’s a hidden conspiracy constantly working to take away one’s personal ‘liberties’; and that the American Dream is only about the accumulation of wealth.

Black Lives Matter questioned American exceptionalism in an even more blatant way. It made it impossible to ignore that America’s history is tainted, and that the economic and psychological effects of slavery haven’t come close to being resolved. The 1619 Project of the New York Times, inspired by BLM, has shown that the US has never been an equal-opportunity haven for immigrants. The pandemic has further demonstrated that everything from income to health is worse for people of colour.

Both Trump and Black Lives Matter have forced the country to look past its rhetoric and admit some painful truths. We can’t be regarded anymore as the bastion of liberty and equality. Our commitment to the central tenet of the Declaration of Independence – ‘all men are created equal’ – is dubious, and our national motto – ‘E Pluribus Unum’ – is equally doubtful. Not only are there systemic inequities in America, but a significant percentage of Americans has no interest in addressing them.

In the eyes of the world – and in our own eyes – the US is in a very different place from four years ago. The question that we face as we wait for Joe Biden to take office is as basic as it gets: can we rebuild the country on the ruins of our illusions about ourselves?

If, in the space of four years, Trump morphed from a clown into the model of a demagogue, it’s worth taking a quick look at what kind of demagogue he became, and whether it suggests what future Trump spinoffs will look like.

Trump’s style of demagoguery was a quirky one, different in essential ways from antecedents, which is why it was hard to describe him as a fascist, or even a power-hungry authoritarian. Not only did he use the most contemporary forms of social interaction to create an illusion, a meme of himself as a kind of pretend dictator, but unlike earlier demagogues, he was less interested in power than in winning and money – the two major preoccupations of this quantitative, competitive century.

In terms of exercise of power, Trump did very little. In foreign affairs he was timid. His only practical efforts were in trying to sign trade deals and making sure that his properties made money. He forced no major legislation through Congress, spending most of his time dismantling Obama’s achievements and exiting international treaties: hardly the program of a megalomaniac. Rather than having an agenda, what he really wanted was to show everyone that he was better than his predecessors. A schoolboy bully’s pride in winning (or fear of losing) was what counted most, which explains why the public humiliation of the election result hurt him so much.

There was a comic aspect to Trump’s insistence on his superiority in every aspect of his life that the internet and comedians picked up on quickly: how he won the 2016 election in the greatest landslide in history, had the biggest inauguration crowd in history, was the richest man in history, had an astronomically high IQ… Fans and detractors alike were mesmerized by this pompous braggart – a character that ancient Greek comedy-writers called an alazon and Roman playwrights Miles Gloriosus – whose vanity turned reality into a mirror to reflect his self-importance.

Nobody really took the Donald seriously, which was part of the fun – until this year, when COVID-19 and the George Floyd murder forced Americans to see that they weren’t living in a TV comedy sketch. Trump’s narcissism, his disregard for people’s suffering, his willingness to call in Federal troops to break up legal demonstrations turned farce into something much darker. Whether it was neglect of responsibility or overuse of power, he wasn’t a meme anymore but an actual dictator. Real people – hundreds of thousands of them – were dead or dying.

If Biden had won more decisively, one might have imagined a far different scenario for America: one in which Biden ushered in a more aggressive approach to COVID, while the GOP re-evaluated the direction it had taken since the 90s, gently shoved aside the radical Right and brought back the establishment Republicans who have been waiting in the wings since 2016. Trump might have taken his 39% and formed a new party. Or Biden, with his working class credentials and promises of a vast infrastructure bill, might have wooed some of Trump’s supporters back into the Democratic fold.

But except for winning the presidency, the Democrats did poorly. This isn’t the time or place to analyse why, but the fact is indisputable.

Not only did they lose several seats in the House and fail to change the makeup of state legislatures (three-fifths of which are Republican), they’re also likely to lose two Senatorial seats in a run-off on January 5. Though Mitch McConnell, the Republican majority leader who stood squarely in Obama’s way for eight years, is reputed to be an old friend of Biden’s, he may prove as recalcitrant as he was during the Obama period.

To repeat a truism: the country is bitterly divided.

The 73 million people who voted for Trump are firmly dug in. If Trump gets past his legal troubles and isn’t tried for treason for giving away military secrets, he plans to run again in 2024. The Supreme Court now has a decisive conservative majority that can undermine not only future Democratic legislation but decades-old standing laws. Progressives on the Left, whose influence helped get out the vote for Biden, show no interest in finding common ground with the Right. Alexandria Ocasio-Cortez has declared that bipartisanship is dead and is supporting the ‘Trump Accountability Project’, a public list of Trump ex-employees, intended to hold them to some sort of reckoning. As gentle a soul as Biden appears to be, he may not be able to heal this divide.

Two further obstacles stand in the way of change in the US system. The first is the constitution itself. What we’ve seen in the past four years is that the apparatus of government is creaky, slow-moving. The executive has steadily taken over powers that used to be the domain of Congress, which is in a perpetual stalemate. Our election system is outmoded, with the Electoral College giving an unfair advantage to rural states. But we can’t change any of this. To amend the constitution requires two-thirds of both houses and the ratification of three-quarters of the state legislatures. The last time the US passed a constitutional amendment was forty years ago.

A second problem is in the area of values. In the US there has always existed an ideological war between two sets of values: individualism on one hand, and a wish to build an equitable society on the other. The Founding Fathers believed that John Locke’s concept of ‘enlightened self-interest’ – that self-interest, if tempered by reason, would recognize the need for a support system of other people – would provide a middle position between these poles.

In some periods of American history, this worked. Not now. The sides are too far apart and are ready to confront each other in the kind of massive rallies that we’ve seen over the last four years. More than likely this will lead to continued fighting and killing in the streets. Which leaves the future of democratic government in the US in real doubt. If people aren’t willing to compromise, how can freedom and community be reconciled? Or rather, since ‘freedom’ has come to be a synonym for pure self-interest, and ‘community’ sounds to American ears like ‘communism,’ how can we even find a way to re-examine the terms themselves?