Civilization is doomed. Nothing can be done. The question is not ‘if’, but ‘when’. Anthropologist Aet Annist connects climate fatalism to global inequality, since angst about being inconvenienced assumes we live comfortable lives to begin with. Fear produces radically different responses: hope for individual survival or a demand for global intergenerational equality.

‘Recently I came to realize how vulnerable my hometown is, that the arrival of wildfires and floods is not a question of “if,” but “when”. How would we continue our spiritual practices in the event of a catastrophe? How would I work with my community, if climate apathy prevents them form mobilizing? How do we prepare ourselves mentally and ecologically?

‘In choosing where to lead your post-collapse lives, definitely consider how neglected nuclear reactors will pose a threat to large territories!’

‘What does the group think – what will our currency be after a financial collapse. Silver? Gold? An eye for an eye?’

These statements are taken from social media discussion boards. They are brought together by their conviction that  climate catastrophe in the near future is inevitable. In the light of such a movement, it is surprising that, in some countries, climate change is still not seen as a significant environmental issue. In Estonia, only one per cent of Estonians believe climate change is an important problem.1

Estonia’s geographic location means its people have, until now, felt relatively few consequences of climate change. Because of this, Estonia’s climate change deniers have not had to confront obvious facts and lived experiences. On the other hand, the country’s scientific community still includes powerful voices from previous generations downplaying climate issues and sometimes promoting oil shale development. This is in harmony with nearly a quarter a century of neoliberal orthodoxy and political forces seeking questionable political capital by portraying climate activists as ‘conspiracy theorists’ or ‘attention seekers’.2

In many developed capitalist societies, the percentage of people expressing significant concern over climate change has been on the rise.3

The more intense feelings of ‘climate fear’, in the form of ‘pre-traumatic stress disorder’ and ‘climate grief’, have become objects of psychological study.4

The following discussion relies partly on my twenty-five years’ participation in climate-related discussions as a concerned citizen, as well as a new pilot project among groups that have acknowledged the grave danger climate change may pose. This research aims to unveil how climate fear affects relations with others and ability to participate in society. 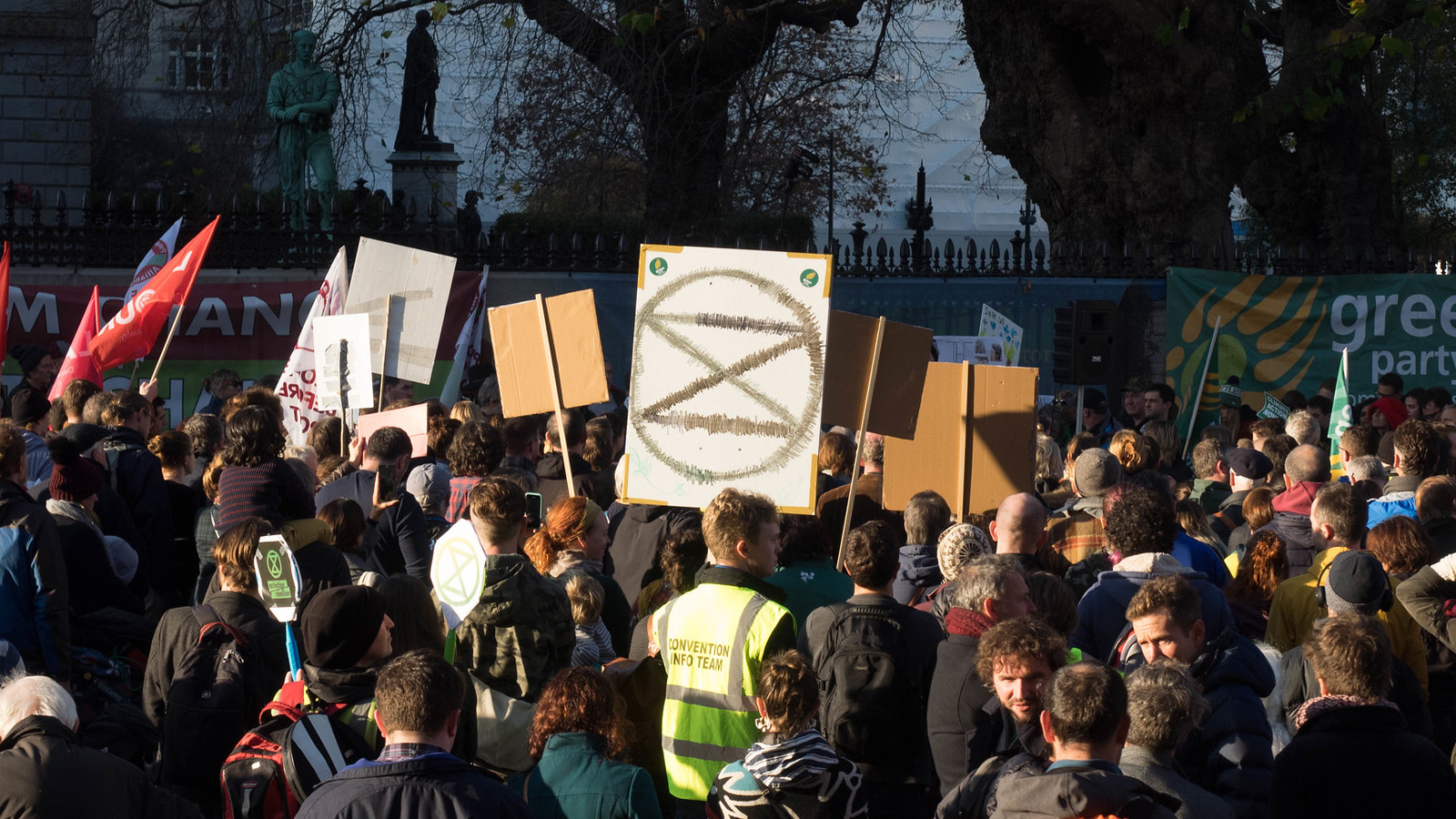 Responses to the coming disaster

Generally speaking, climate fear moves along two axes: from individual to social responses, and from apathetic grief to energetic action. Among individualistic responses, one of the increasing trends seems to be a deep grief for both real and anticipated losses amidst other people’s indifference. This may also create apathy, which is, however, difficult to capture and study its social ripple-effect because it may not be reflected in anything observable. The ‘grievers’ find others sharing their despair on the internet. Paradoxically, one such community, predicting the destruction of humanity in the very near future, is also the oldest. Some emerging communities organize according to what is most important in their grief – from deep reflections on their feelings of sadness to searching for meaning of life in the face of destruction.

Those who have moved from despair to action may, nevertheless, remain individualists. There is a long history of such groups in the United States, predating climate fear, holding the ‘Wild West’-style conviction that the modern state may turn out to be temporary, vulnerable, or even a repressive phenomenon. Private individuals would be wise to be ready for the unfolding of the ‘WTSHTF’ (‘when the shit hits the fan’) scenario at any moment, when everyone has to fend for themselves.

For survivalists and ‘doomsday-preppers’, the primary goal is defending themselves and their families and surviving by themselves the worst aftermaths of catastrophes: stockpiling food and potable water, building and maintaining ‘bug-out’ shelters with supplies, but also acquiring self-defence skills. In the United States, this also means stocking up on guns and ammunition. Such preparations also point towards the central conviction of the preppers: that, in the midst of a catastrophe, the rest of the population becomes a feral mob against whom their life, liberty, and property need to be defended at any cost. At the same time, the individualistic climate preppers do understand that this may well be a long term project for which it is necessary to seek the support of other like-minded ‘survivors’. Thus, preppers are often, in fact, moving towards collective solutions, seeking trustworthy people with whom they hope to survive in the post-apocalyptic world.

Various eco-communities form in similar ways, though they generally lack the ‘zombie apocalypse’ presuppositions about other peoples’ behaviour. Many such communities emerged before the apex of climate fear, primarily motivated by the goal of living harmoniously with nature. These groups mitigate climate fear with plans for living simple, offline, autarchic lives. At the same time, entire industries have emerged to cater to wealthier preppers who believe that their money can shield them from the apocalypse.

The new logic of protest

The most active response to climate fears is public protest. This aims to forge a path towards a ‘new world order’ to lessen the consequences of ecological collapse although they still presume this is inevitable. Whilst some analysts think fear is an inappropriate source of mobilization.5

Since 2018, the climate protest movements Extinction Rebellion and Fridays for Future have become global phenomena. Fear is central to both groups’ rhetoric. Likewise, social media groups focussing on climate-related anxieties show that fear can, in fact, catalyse actions that have, until recently, been rejected as ‘too radical’.

Climate change is the primary source of the problem, but fear remains a reaction of the socially privileged who are concerned about the loss of their social position and their ability to pass it down to their children. Fear’s selfish and self-destructive potential is enormous, and it is already amplifying social, global, and generational inequality. In other words, we cannot separate climate change from other social problems and must confront the belief that it is possible to sustain unequally privileged lifestyles on an interconnected planet.

When some of the individualists move from ‘go-it-alone’ self-reliance to seeking out cosurvivalists, they may recognise that, in a more egalitarian society, there are fewer sources of fear since everyone is in it together. But this search may also lead to the wish to drive inequality to its logical extreme, making sure that only the (already) privileged survive.

Recent outrages, such as the mass shooting in El Paso, Texas, offer examples of what happens when the effects of combinations of racist hate and ‘green’ ideologies become dominant: the pettiest and the cruellest would thrive.6

It is telling that today’s political populists have directed their fearmongering not against climate change but migration, given how climate change has become one of its principal triggers.7

Crisis and fear trigger extreme responses that help disentangle radically different social responses: a hope to save one’s own skin over the bodies of ‘foreigners’ on the one hand, and the aim to put things right and find a collective way out of the extraordinary danger by creating more global, generational, and social equality on the other.

In the first scenario, the power to act involves making inequality more socially acceptable. These efforts inevitably lessen how much attention is given to alleviating the catastrophe. This approach also excludes solutions that could prove to be effective if they come from the ‘wrong’ people. In this case, climate change itself becomes a problem of secondary importance. Avoiding this approach should be a goal for both those who understand that a problem with a global scope requires our complete and undivided attention as well as those for whom there is no guarantee that they will end up on the side of the ‘right’ people who survive. Not even the most carefully crafted and maintained inequality can guarantee even those with privilege, not even the super-rich, the slightest certainty that they can personally continue to live the ‘good life’.8

Weighing these options, everyone can think about how they might fare in the future ‘Hunger Games’ and whether to contribute towards the first solution (reinforced individualism and accelerating inequality) or the second (a more egalitarian world where fellow citizens need not be feared). They can simultaneously consider which solutions are already implicitly supported by which political actors. Climate change may well turn out to be a test in a classroom that has, thus far, been divided into bullies who coast on the backs of others and the bullied. Achieving a passing grade will require real cooperation.