The Ukrainian government has announced a scheme to use AI to fight corruption in the Verkhovna Rada, the country’s parliament. The technology, dubbed ‘Big Brother’, is supposed to detect MPs’ voting patterns and to flag anomalies. AI is used worldwide for a variety of anti-corruption purposes. So will it work here?

Transparency International’s 2018 Corruption Perception Index (CPI) puts Ukraine in 120th place out of 180 countries. With a CPI score of 32, where 0 is highly corrupt and 100 is very clean, Ukraine has a long way to go in its fight against corruption. Since the country became an independent state in 1991, every government administration has vowed to tackle corruption. While the country has started to implement extensive anti-corruption measures in recent years, it has not shown any significant improvement.

In August this year, Ukraine’s newly elected parliament, dominated by President Volodymyr Zelensky’s Servant of the People party, announced plans to use artificial intelligence (or AI) technology to prevent corruption in Ukraine’s parliament, the Verkhovna Rada. How this new initiative can help in Ukraine’s fight against corruption remains to be seen.

Transparency International scores countries on how corrupt their public sector is viewed by analysts, businesspeople and other experts. It began ranking Ukraine’s perceived level of corruption in 1998, when it ranked 69 out of 85 countries. On the scale of 0 to 10, Ukraine ranked 2.8 at the time. Over the next two decades, Transparency International added more countries and territories to the CPI index. While there were times when Ukraine improved in the rankings – in 2012, for instance, it moved from 152ndto 144th – its CPI score has remained consistently low. Under the CPI 10-point scoring system in place until 2011, Ukraine, year after year, hovered within the 1.5 to 2.8 range. Since the 100-point scoring system was adopted in 2012, the highest CPI score Ukraine has ever received was 32.

Various Ukrainian governments have recognised corruption as a ‘major problem’. One after another, the country’s leaders have pledged to eradicate corruption: from Leonid Kravchuk, Ukraine’s first president, to Volodymyr Zelensky, today’s incumbent president and a former TV comedian. Since 2014, at the insistence of the International Monetary Fund and the European Commission, anti-corruption reforms in Ukraine have finally begun to take off. The recent anti-corruption initiatives are too numerous to list here. To name just a few, following the adoption of several anti-corruption laws, Ukraine’s government has established the National Agency for Prevention of Corruption (NAPC), a state agency responsible for the formulation and adoption of the national anti-corruption policy. Ukraine has also equipped itself with a slew of investigative and prosecutorial bodies specialising in public corruption. They include: the National Anti-Corruption Bureau of Ukraine (NABU); the State Bureau of Investigation; a national agency for finding, tracing and management of assets derived from corruption and other crimes; and a specialised anti-corruption prosecutor’s office.

The Verkhovna Rada, Ukraine’s parliament, also has a specialised anti-corruption committee – the Committee on Preventing and Combatting Corruption of the Verkhovna Rada of Ukraine, which is tasked with carrying out anti-corruption investigations. Other measures include the creation of an online procurement system, called ProZorro, and an electronic asset declaration system for public officials. These initiatives, all taken within a span of less than five years, are remarkable. But they have not resulted in real change. Few cases have been referred to prosecution and even fewer cases have resulted in convictions. The NAPC and the specialised prosecutor’s office have themselves been involved in some scandals. Without adequate auditing and data verification, the e-procurement and e-declaration systems have had a slow start.

On 4 August 2019 Zelensky’s Servant of the People party added a new twist to the anti-corruption reforms, this time aimed at the Verkhovna Rada itself. David Arahamiya, the Servant of the People’s leader, announced his party’s intention to use AI technology to fight potential corruption in parliament. Arahamiya did not say what AI platform they may use or explain the technical aspects of the initiative. He only offered a general outline and description of the technology and called it ‘Big Brother’. According to Arahamiya, ‘Big Brother’ will continuously monitor votes, detecting patterns and flagging ‘anomalies’ for further investigation.

The term ‘artificial intelligence’ was coined in 1956 by John McCarthy, one of the founders of AI research, who defined it as ‘getting a computer to do things which, when done by people, are said to involve intelligence’. Many different definitions for AI exist today, but it generally refers to ‘machines that respond to stimulation consistent with traditional responses from humans, given the human capacity for contemplation, judgment, and intention … AI works by combining large amounts of data with fast, iterative processing and intelligent algorithms, allowing the software to learn automatically from patterns or features in the data’.

There are four main types of AI systems: reactive machines, limited memory, theory of mind and self-awareness. AI has numerous applications, from game playing to navigation to self-driving cars. AI is used in these and other contexts through the application of a number of processes, including machine learning, deep learning, natural language processing, expert systems and fuzzy logic. Various industries employ AI, including healthcare, education, automotive, retail, finance, and legal.

Using AI technology as an anti-corruption tool is not entirely new. Sweden, for example,uses it to uncover fraud and tax evasion. The UK government also uses AI to identify welfare fraud. AI technology looks for patterns in submitted claims, such as the same phone number or descriptions written in a similar style, and flags suspicious claims for further investigation. The government of Singapore has tested AI to identify procurement fraud through an analysis of financial data, procurement requests, tender approvals, and the names of government and vendor employees and their family members. 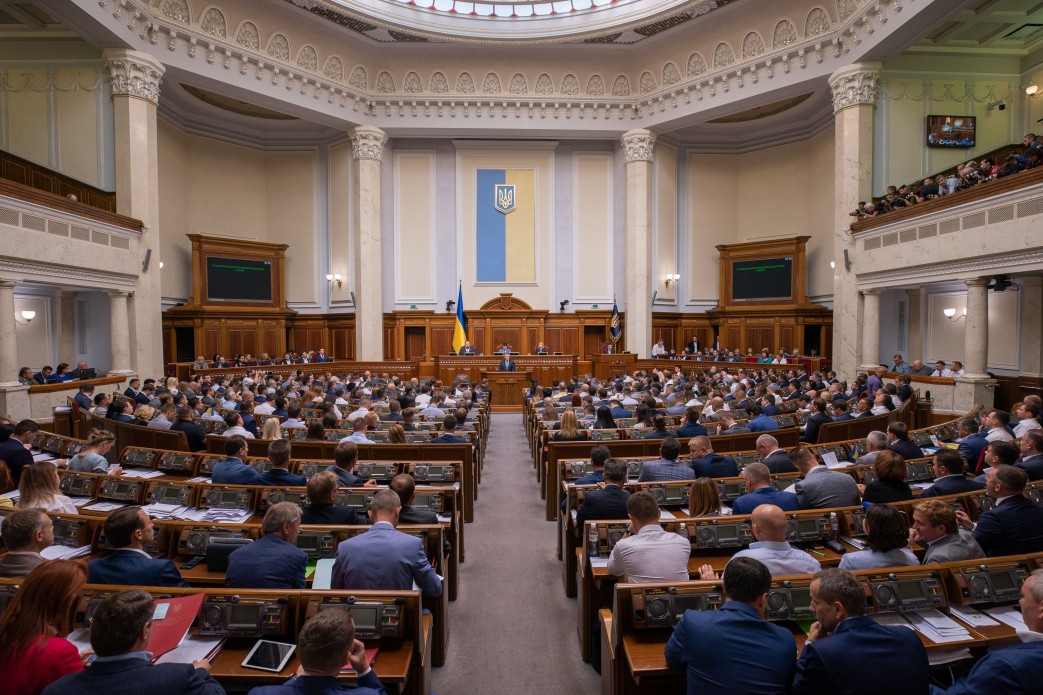 Source: The Office of the President of Ukraine

The benefits of AI are immense; it has the ability to analyse vast amounts of data and reveal patterns and anomalies and identify relationships, all at the speed and complexity that no human can match. However an AI platform will only be as good as the data provided and the human training it receives. Considering this, it is not clear whether, or how, AI technology could be of benefit in fighting against corruption in the Rada.

Little is known about how the Rada would employ ‘Big Brother’. To explain how AI may assist with the detection of voting aimed to benefit corrupt interests, Arahamiya offered the following hypothetical: ‘Imagine, someone votes for two months in a certain way, and then all of a sudden, nine people vote according to a different scenario … in a way different from usual.’ There are 450 deputies in the Verkhovna Rada. If they vote on, say, 100 legislative proposals a day, the amount of data may be well suited for AI assistance.

Yet the data may lack quality from the AI’s perspective for two reasons. First, ‘button pushing’, or non-personal voting on behalf of, or instead of, absent delegates has been a long-standing practice in the Rada. Until this problem has been addressed, no AI platform can analyse voting history or patterns effectively since one cannot be sure who cast the votes. Second, considering the wide range of issues legislators vote on daily, there may be too many apples and oranges for the AI to compare. To illustrate this, in June this year, the Rada voted in favour of the establishment of boundaries of the Sokal district of the Lviv region, military chaplaincy and professional higher education. On 11 July the Rada adopted legislation on a myriad of issues, including sexual offenders’ registration, alternative energy resources and a free trade agreement between Ukraine and Israel. If one were to load all of these votes into an AI system, it is difficult to see how corrupt tendencies could emerge.

It seems that patterns or anomalies could only be detected if one were to categorise votes to see how a particular Rada deputy has voted, for example, on all the bills related to alternative energy resources or trade agreements. Once that is done, however, AI does not seem necessary, as the size of data would shrink considerably. With corruption a hot topic in Ukraine for such a long time now, artificial intelligence, as a tool against it in the new Rada, will likely spark interest. Whether this will materialise into something tangible is less certain.

Big Tech: The law of power