Why liberal elites can be dangerous to democracy

Interviewed by Ludger Hagedorn, Czech political scientist Pavel Barša makes the case for a balance between the ideals of liberalism and collective sovereignty. Barša argues that individual freedom and civil solidarity are not possible without collective re-distribution and social solidarity, in his response to Timothy Snyder’s book ‘The Road to Unfreedom’.

Ludger Hagedorn: We are witnessing the resurgence of anti-liberal and anti-democratic movements on a global scale. Yet, despite their many resemblances, each seems to be caused by quite particular factors. Or, to invoke the title of Timothy Snyder’s book:1 is there one road to unfreedom, or many?

Pavel Barša: First of all, we should acknowledge that some of these movements are illiberal but not necessarily anti-democratic, at least rhetorically: most of them invoke the territorialized people, its will and its sovereignty, against the global elites who live everywhere and belong nowhere. As such, this does not make them anti-democratic. Everything depends on how they define the people and what methods they use in their struggle. The reproach that elites are not representative of the people refers to the very basic principle of democracy. It may be wrong, but it is not illegitimate.

Having said that, the answer is yes: it is important to grasp the global resemblances of populist movements. There are many similarities between western neo-nationalist leaders and non-western challengers to liberal democracies such as Narendra Modi in India, Jair Bolsonaro in Brazil or Rodriguo Duterte in the Philippines. Still, I would not place them in the same category as European populists. Similarly, Russian nationalist neo-imperialism is a category of its own. As regards the European and Central European neo-nationalists, it is a simple fact that many entered parliament or gained executive power without the help of Putin or even before Putin’s neo-imperialist turn. To understand the sources of their success, we have to look at endogenous factors. On a very general level, the current wave of neo-nationalism in Europe is a reaction against the processes of globalization and trans-nationalization that have taken place over the last forty years.

Pitting ‘the people’ against ‘the elites’ is an essential aspect of populist rhetoric, but it also functions as a characteristic pattern of nationalist debates. How dangerous is nationalism’s resurgence?

Nationalism is not a priori anti-democratic. We could even claim the opposite: the rise of nationalism in the 19th century was connected to processes of democratization. Without the democratic idea of popular sovereignty, there could be no sovereignty of a particular people. In other words, collective sovereignty has both a democratic and a nationalistic aspect. So far, we have not seen any democracy which has not been embedded in the form of the territorial nation-state. 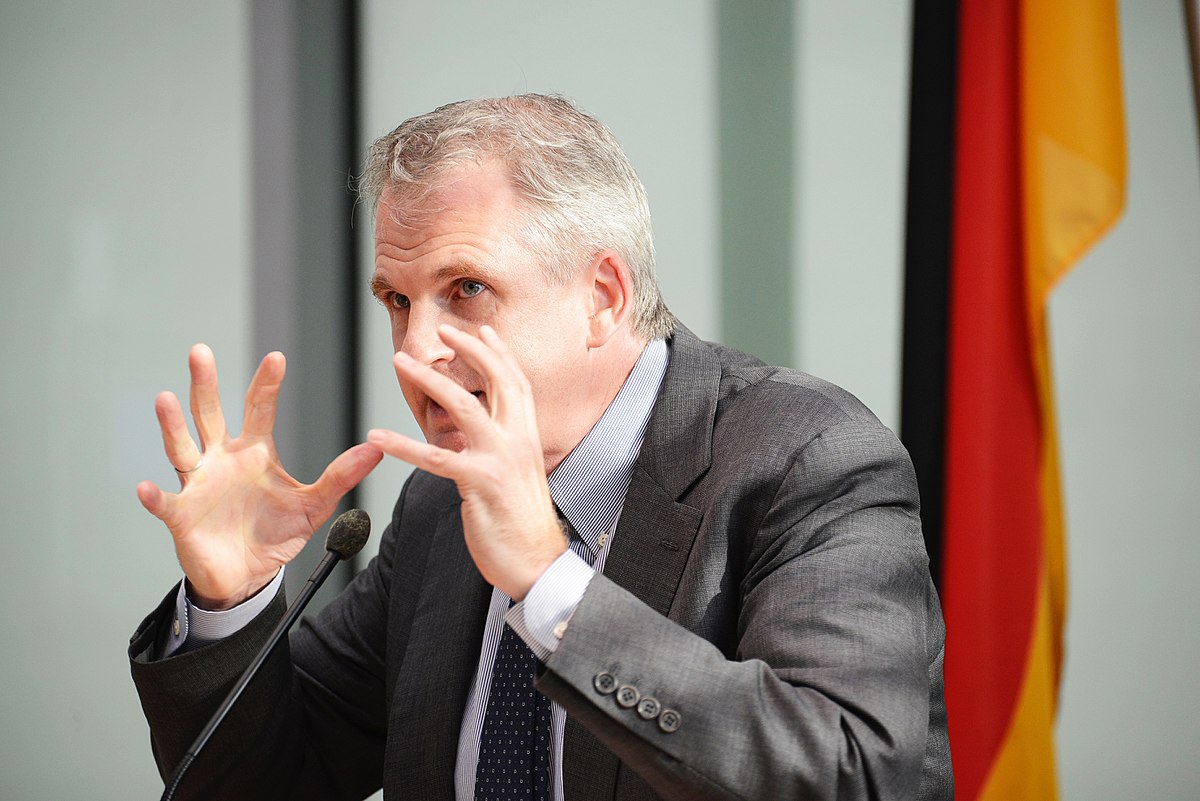 Mapping the road to unfreedom

But what is important is that not only nationalists or populists, but also liberals can represent a challenge to democracy. There have always been liberals — such as Friedrich von Hayek before the Second World War — who defended transnational federalism against the nation-state, precisely because they feared the interference of the collective will of the people with the supposedly spontaneous self-organization of markets, which are the oligopolistic domain of economic elites. Hayek sided with the economic elites; other liberals sided with the cultural elites. John Stuart Mill famously suggested that the votes of the educated be given greater weight than those of the uneducated. In other words, members of the liberal elites can be as dangerous to democracy as the self-styled spokespersons of the people.

You have emphasized that the difference between elites and the common people is not a fantasy of populist demagogues. Because elites are gifted with resources (economic, cultural, political), they tend to value meritocracy and individualism. People without these resources, on the other hand, tend to value collectivism and solidarity and demand the re-distribution of resources as an affirmation of their dignity. What does this imply for democracy?

It indeed has important consequences. Democrats, as I see it, should not fall into the trap of a Manichean opposition between meritocratic individualism and egalitarian collectivism, between civil society and the state, and between personal freedom and social solidarity. We should not uncritically follow a tradition that I would call anti-totalitarian liberalism. This is inclined to define liberal-democratic values by their opposition to collectivist values, which it in turn associates all too easily with totalitarian rule — whether it be buttressed by the ideology of the far left or the far right.

We have to look at the legacy of anti-totalitarian liberalism critically. We are living in an era that has been shaped by its hegemony in the 1990s and 2000s. Today’s neo-nationalists and authoritarians challenge this hegemony. The anti-totalitarian movements of the 20th century can inspire us, and I consider myself an inheritor of their legacy. Yet their one-sided defense of freedoms and rights against the state also helped de-regulate capitalism, which led to huge social inequalities and, ultimately, undermined democracy.

How, then, do we account for the heavy use of the concept of ‘solidarity’ that characterizes these anti-totalitarian movements?

Yes, that is a very interesting point. If you take a closer look, you can easily tell what is going on, namely that social solidarity, i.e. solidarity that is implemented within the borders of nation-states, has been replaced by human solidarity or civic solidarity, which is without borders and which concentrates on human rights and equal citizenship. These anti-totalitarian groupings belonged to what are sometime called ‘new social movements.’ The ‘old’ social movements were the trade unions and social democratic parties that entered the political system in order to produce state policies. The new social movements operate within civil society, which they seek to defend against the state. These civic movements have occasionally been able to overthrow authoritarian regimes. But they are incapable of building free and egalitarian societies. Their ideological and political victories in the 1980s and 1990s stemmed from the fact that they stepped into the vacuum created by the demise of socialism and anti-colonial nationalism. 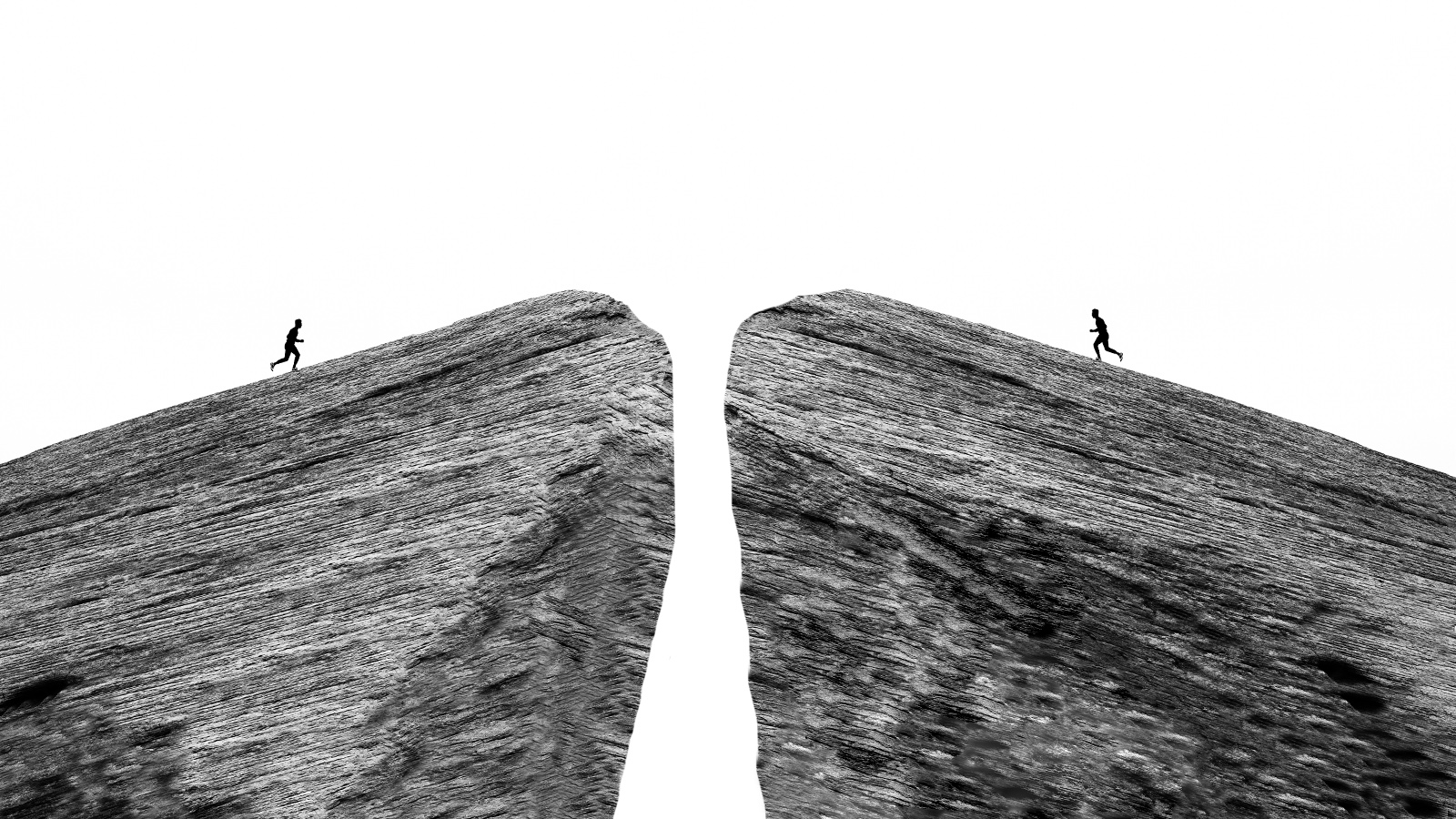 Illustration by Merve Akyel based on a photo by Jeremy Lapak on Unsplash.

So, would you say that a collectivist utopia was replaced by an individualistic one?

Very much so. The utopias of class and national emancipation were carried out by the state, which had been captured by revolution. The new individualistic utopias of emancipation were to be realized against the state. The latter kind of emancipation is embraced by people endowed with the necessary resources (economic and cultural), which help them obtain self-realization in the global arena. Some anti-totalitarian liberals in Central Europe, such as György Konrád, openly claimed that the civil society of the post-communist era would be a society of the educated middle class. Konrád thought that the bourgeoisie should claim the mantle of the universal class from the proletariat. Those who did not belong to this class became the losers of globalization. After being abandoned by the socialist parties, which also turned liberal and dropped their original re-distributive agenda in the 1990s, they have tended to vote for the populists, who promise them the restoration of the strong national state which is able to protect them from anonymous global forces. This is our situation today.

It seems that you consider the nation state to be indispensable to social solidarity, without wanting to advocate nationalism. What, then, is your answer to the situation you have outlined?

Well, we should definitely not reply to it with the old anti-totalitarian ideology, because this once again confirms and strengthens the gap between the educated elites (winners of globalization) and the common people (who tend to be its losers). This plays into the hands of the populists, who are thriving precisely because of this gap and because of the huge social inequality produced by forty years of capitalist deregulation. If we really want to counter populism, we should do the opposite — bridge the gap. This entails that we do not pit individualism against collectivism, but try to conceive them as mutually conditioned. Our slogan should be that there is — and should be — no individual freedom and civil solidarity without collective re-distribution and social solidarity. 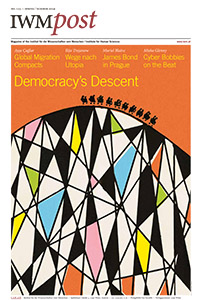 The ideas developed in this interview were first presented by Pavel Barša in a public debate with Timothy Snyder at Charles University, Faculty of Arts, on November 22, 2018, under the title ‘One Road to Unfreedom, or Many?’ The Lecture was part of a program at IWM that is generously supported by the Ministry of Foreign Affair of the Czech Republic.