This February, I had planned to go to Ukraine on a research trip. I am involved in an interdisciplinary project on challenges to liberal democracy; my interest is what these mean for the borders and border regions of Ukraine. My destination was supposed to have been Kharkiv, Ukraine’s second largest city, forty kilometres from the border with Russia. I had also intended to conduct interviews in near-border towns of the Kharkiv region. A new wave of COVID-19 forced me to cancel the trip, but I hoped that in early spring it would finally be possible.

Instead, for the last four weeks I have been sitting at my computer watching a fully-fledged war launched by Putin’s Russia, causing immense suffering for millions of Ukrainian families. The largely Russian-speaking metropolis of Kharkiv, my birthplace and the home for several generations of my family, increasingly looks like Aleppo. Before the war a flourishing cultural and academic centre, Kharkiv is now half empty. As of 8 March, 600,000 inhabitants had left the city by train alone.

While the horrific pictures that I cannot stop watching evoke my grandmother’s stories about Kharkiv during World War Two, my Kharkovite friends and colleagues try to reach me from Lviv, Kraków, Berlin or somewhere near the Ukrainian-Hungarian border. Vovchansk and Kupiansk – the small towns in the Kharkiv region that I planned to visit – have been taken by Russian troops; a few days ago, videos of a desperate pro-Ukrainian protest in Kupiansk circulated on social media. Peaceful mass protests were held in Kherson, Melitopol, Berdiansk and other cities currently under Russian control. Mariupol, Ukraine’s stronghold on the Azov Sea and a laboratory for post-Maidan reforms situated at the contact line with the so-called ‘people’s republics’, is under siege and being systematically destroyed by the Russian army.

For Ukrainians, this uneven fight is about the survival of Ukraine as an independent nation, which Putin has repeatedly referred to as ‘non-existent’. However, it is also about the defence of liberal democratic values and the right to decide where the country belongs, namely in the European Union. 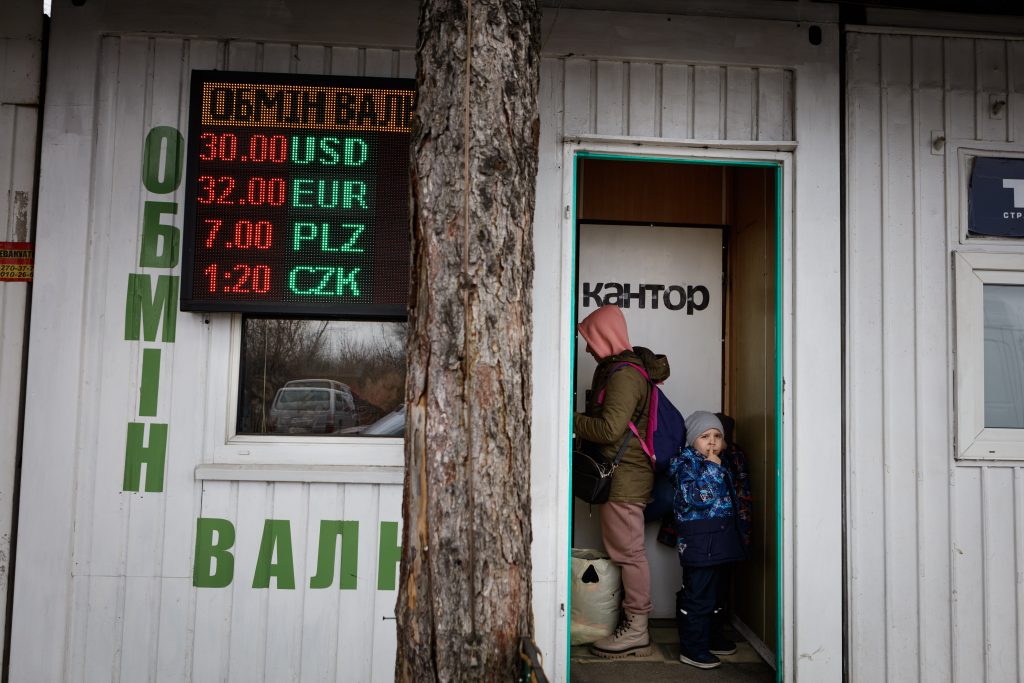 A new challenge for the Western liberal order

It is for these values that hundreds of thousands of Ukrainians protested on Kyiv’s Maidan in 2004 and 2013/14. There is no denying that post-Soviet Ukraine has had problems with corruption and populism. It was a society haunted by divisions and radicalization at its political margins – like almost every country in (eastern) Europe. But these domestic challenges to liberal democracy do not alter the fact that the main threat – not only for Ukraine, but for Europe – now comes from Putin’s Russia. With his war on Ukraine, Putin is seeking to destroy the post-Cold War order and the very principles on which European societies are built.

According to pro-Putin voices in Russia, the ‘Russian World’ is fighting the ‘western liberal order’. Ukraine is certainly not a perfect model of the latter, but for years it has offered an escape for oppositional journalists and intellectuals from Russia. Today, as a country under attack, it is still more free and democratic than the aggressor state, which has banned all independent media and is currently seeing an emigration wave of the educated class reminiscent of the exodus after the October Revolution.

To repeat, Ukraine is not the only and maybe not even the main target of Putin’s Russia. This war represents an odd mix of old-fashioned military combat and new types of war. Having observed the political impact of the refugee crisis of 2015 in western Europe and Lukashenka’s weaponization of migration at the Belarusian-Polish border, Russia is now trying to destabilize the EU by pushing millions of Ukrainians out of their country.

But the destruction of Ukraine and its pro-European aspirations is also a moral weapon. Moscow is punishing and humiliating the European Union by exposing its weakness, its lack of strategic thinking and political resolve. If Ukraine’s western partners are unable to stop the Russian aggression in Ukraine, they lose moral credibility. The collective West will then exit this crisis considerably weakened, especially in the eyes of eastern Europe. To leave Russian war crimes in Ukraine unpunished would undermine what generations of Europeans have come to see as the moral order established with the defeat of Nazi Germany and the Nuremberg Trials. That really would be the end of history.

Almost daily I speak to a close friend who is still in Kharkiv. One of the reasons she is not ready to leave is that she wants to be close to her relatives living in the Luhansk oblast. With one of Moscow’s demands being the drawing of the boundaries of the so-called ‘people’s republics’ along the administrative boundaries of the Donetsk and Luhansk oblasts, her chances of seeing her family soon look slim. On 14 March she called me in desperation. Her relatives had told her that it was the Ukrainian army that had been shelling their town. They had been brainwashed by the Russian TV. Now, she told me crying, the only thing they can say to each other is ‘I am happy you are still alive’.

Russia’s instrumentalization of media for propaganda purposes is nothing new. In 2014, distorted narratives produced and disseminated by the Russian media contributed to the pro-Russian mobilization in eastern Ukraine, legitimized the annexation of Crimea and separatism in Donbas, fuelled the military conflict and destroyed families and friendships. Today, Russia is doing the same on a much larger scale. Moscow’s claims that for the last eight years a Nazi junta in Kyiv has been committing genocide of Russian speakers in Donbas’, or that Ukraine has been working on biological weapons in cooperation with the USA, find an audience both at home and abroad, regardless of their absurdity. The aim is not just to spread lies, but to make truths and lies indistinguishable.

In this respect, too, one should be clear where the threat comes from. Despite its existence being endangered by the Russian invasion, Ukraine has not introduced censorship. Ukrainian and international journalists are free to do their job, often risking their lives in the process. Ukraine is fighting an information war, of course, but Kyiv does not need to produce fake news – the truth about Russia’s war speaks for itself.

This is not the case in Russia. The Kremlin’s attack on independent journalism in Russia did not start yesterday, of course, but the war has opened a new page. The remaining oppositional or simply critical media have been shut down. At the same time, the Russian authorities are restricting access to western media: Facebook and Twitter were recently banned. With others such as YouTube removing their services, it has become very hard for the majority of people to access alternative sources of information.

The result is that, like the family of my friend in Kharkiv, many Russians living abroad cannot communicate with their relatives in Russia: they simply live in different realities. The collapse of communication and the spread of disinformation is another major challenge to liberal democracy, which is bound to truth and thrives on the free exchange of information and opinion. 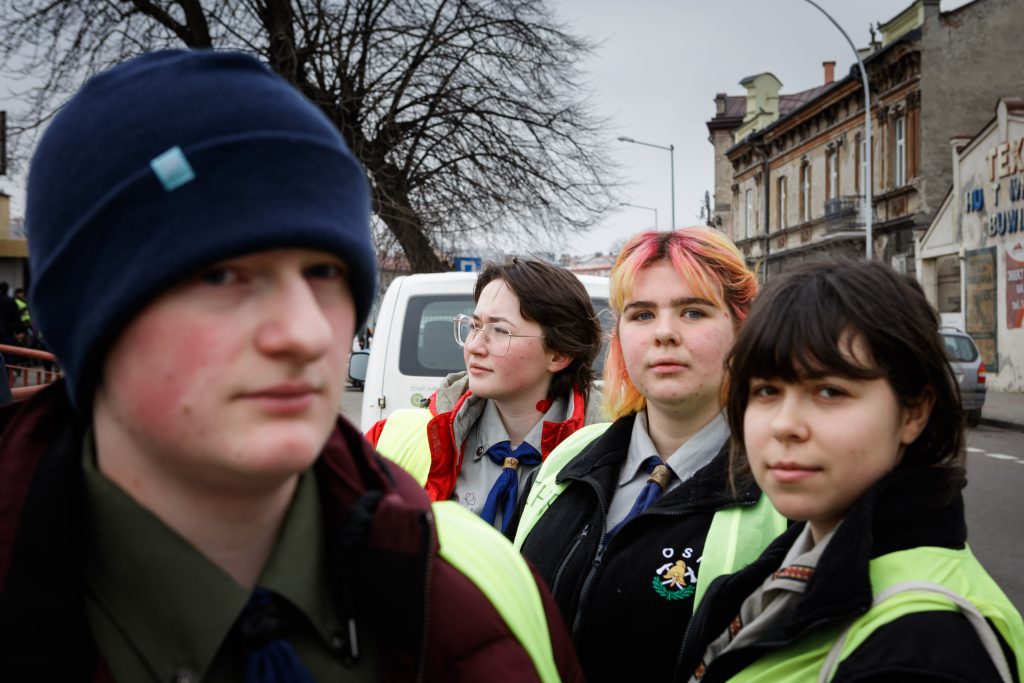 Scouts at Przemyśl station, on the Polish border. Zuza (orange hair) and her friend are both volunteers. © Florian Rainer

What does this mean for Ukraine’s borders, the object and the site of my research? Here, too, we have to get the picture right. The independence and sovereignty of Ukraine in its existing borders was assured in the Budapest Memorandum of 1994, with the Russian Federation as one of the signatories. Russia violated this agreement in 2014 with the annexation of Crimea and the hybrid war in Donbas, and now with the invasion of the whole country. Ukraine has become the arena of a fully-fledged war threatening the lives, health and basic rights of millions of people.

By pushing civilians out of the cities and villages and insisting on an ‘evacuation’ to Russian territory in the name of ‘humanitarian help’, Russia is carrying out a mass displacement of the local population. The purpose is none other than to prepare the ground for a radical redrawing of Ukraine’s borders in the east and south. Belarus in the north is a tacit (albeit still reluctant) ally of Russia, while Moldova in the south-west has become an important transit country for Ukrainian refugees. The border with the de facto state of Transnistria could easily become another military front against Ukraine.

Ukraine’s border with the EU is now the only section that is geopolitically and militarily uncontested. The opening of the border after the Russian invasion has, however, confronted the authorities on both sides with a refugee situation they were not prepared for. Reports in the media and on social networks testify to the chaos and lack of clear rules. There have been frequent cases of bribery and discrimination. Due to martial law, which prohibits adult men from leaving the country, countless families have been separated. Non-Ukrainian citizens residing in Ukraine find themselves in a legal limbo. Discrimination of this kind certainly challenges the liberal order.

However, as a Ukrainian scholar, I find it important to present the whole picture. What we are seeing at the EU border with Ukraine today proves the resilience of liberal democracy and the vitality of European civil society. The Ukraine–EU border has become the site of an unprecedented, collective act of solidarity in response to the challenge from Putin’s Russia.

Ukrainians dream that one day, their country will join the EU and that this border will become invisible. For now, however, they are simply glad that they can cross it and reach a safe haven, a secure territory that Russian tanks and bombs most certainly will not reach.

This is an extended and version of an article first published in SCRIPTS blog.