An interview with Jan-Werner Müller

Germany’s politicians lack deep European convictions yet are susceptible to calls for a more strident role in Europe; and while the mainstream is unlikely to give up what it sees as the recipe for German success, “constitutional patriotism” could allow for greater Europeanization. Jan-Werner Müller talks to Esprit about German contradictions.

Esprit: Europeans, especially the French, have trouble understanding the way Germans have perceived the idea of Europe since reunification. What is the significance of reunification in German public debate and how does Germany perceive itself as a country (once divided, now united) and as a nation? 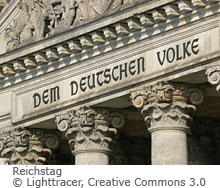 Jan-Werner Müller: Unification and the debates surrounding it were already showing a marked impact on the intellectual sphere by about 1995: an old and very strongly anti-national (and also pacifist) Left – of which Günter Grass, for instance, was an important representative – was decisively weakened; in fact, a whole milieu of the old Bonn Republic began to disappear, although a similar “alternative culture” might now be re-emerging in Berlin. At the same time, efforts to establish a nationalist New Right also clearly failed. Instead, by the end of the 1990s and in the early twenty-first century, a clear consensus emerged that viewed the united Germany as what is sometimes called a “post-classical nation-state”, i.e. a country that bases its identity (even its raison d’être) on continuing to confront the Nazi past, dealing with the East German past, and shouldering more international responsibilities. In a sense, it is an anti-totalitarian consensus, however one that also comes with a certain distrust of popular sovereignty (after all, a parliament voted to give power to Hitler). Moreover, it is a country that has made a decisive break with an ethnic definition of citizenship. Given the fears of many European neighbours in 1990 of a resurgent German nationalism, I think this is a significant achievement and testifies to a real, deeply entrenched liberal democratic culture. But I also get the impression that German political elites, broadly speaking, often lack strategic vision and find it difficult to articulate any normative map of where the country is and what it should do (whether in Europe, Afghanistan or when confronted with the Arab Spring). Of course, we shouldn’t idealize the past: the old West Germany also pursued its long-term and short-term interests through European integration and within the NATO alliance. But it did so, it seems to me, with a stronger moral compass and more inner conviction among elites.

Esprit: Does the transition from the Bonn Republic to the Berlin Republic mean a growing distance towards the European idea or simply the re-definition of Germany’s relationship to Europe? How would you characterize Germany’s European vocation today?

J-WM: Schröder and Merkel were the first German leaders not to have personal memories of the War – this distanced them from the kind of European idealism that Kohl’s generation still exhibited. Fischer was a partial exception: he was, it seems to me, a real believer in Europe, somewhat similar to Habermas. But again, we shouldn’t paint too rosy a picture of the past: all leaders before them also sought to use Europe for national ends, as in fact every member state did and still does. However, it has become increasingly obvious that Schröder and Merkel were left with an incoherent European legacy: a currency union which by itself doesn’t make a lot of sense in terms of the economies it includes, and all in the absence of economic-fiscal integration, not to mention what often without further explanation is called “political integration”. Contrary to what some observers claimed at the time of the failure of the Constitutional Treaty, namely that the EU had found a kind of equilibrium even in the absence of a constitution, the EU has still not found a real political, economic and constitutional settlement.

This situation now has to be addressed by leaders who are clearly not great believers in moral-historical justifications for European unity, and who often obfuscate the issues: Germany’s foreign minister has just called for “more Europe” while a Christian Democratic minister recently even demanded the creation of the “United States of Europe” – without saying what in practice this would mean. So I fear that Germany has no real road map of how it wants to relate to Europe, other than preserving what has already been achieved in the way of economic gains and personal freedoms (e.g. travel), while at the same time minimizing the costs.

To be sure, there are also some voices who advocate a much more assertive global role for Germany in conjunction with core Europe (of course France in particular) – for instance the political theorist Herfried Münkler, who in a recent article in Der Spiegel openly expressed his concern that Europe is being destroyed by its periphery (e.g. Greece), instead of adopting a global strategy to increase its power. He explicitly called for “all power to the centre” so as to re-empower European elites and for Germany to exercise more leadership, rather than hoping for some illusory democratization of the EU as it is. This is a coherent stance that may well become attractive for a German government, especially if the current approach of muddling through makes neither Germans nor other Europeans really happy – and fails to solve the Euro crisis.

Esprit: “Constitutional patriotism”, for a long time a central concept of German politics, revolves around the idea that Germany can neither assert its sovereignty nor surrender any form of national identity. Has the concept disappeared since unification, or is it still present through the debate about Europe? The 2009 decision of the Federal Constitutional Court deeming the Lisbon treaty only barely compatible with the German constitution strongly linked political legitimacy and sovereignty to the people’s will and seemed to be an indirect attack on Europe’s lack of democracy. Can the decision be understood as a part of the national debate on German identity and European integration?

J-WM: Many observers predicted that the supposedly artificial construct of constitutional patriotism would completely disappear after 1990, since the special circumstances of West Germany (the burden of the Nazi past, being part of a divided nation) no longer existed. But in my view this hasn’t happened at all: constitutional patriotism continues to play an important role in discussions about integrating immigrants and their descendants. I would even say that those who advocate Leitkultur instead of the allegedly “bloodless” and “abstract” constitutional patriotism have in fact accepted the core ideas of constitutional patriotism – even if they continue to reject the word: an emphasis on political values instead of “national culture” and on the importance of acquiring the German language, albeit for political and practical purposes and not because of some ethnic definition of German-ness.

Something interesting and perhaps even paradoxical might in fact be happening with regard to European integration: as you rightly say, the German constitutional court – in its self-conception the ultimate guardian of German democracy (and statehood) – keeps emphasizing that the German parliament remains crucial in legitimizing European decisions and, furthermore, that the constitution (the Basic Law) actually doesn’t allow much “more Europe” than is already the case. But interestingly, in a recent interview, the president of the court quite openly said that if more Europe was needed, Germany could always adopt a new constitution, adding: “it can’t be done without the people” (“Ohne das Volk geht es nicht!”). And even more recently, the editor of the Süddeutsche Zeitung, Germany’s largest quality daily, actually called for a new constitution that would allow the EU to become a proper state. Given that the Basic Law remains sacred in Germany (unlike the French constitution in France), this is astonishing; ultimately it would mean that after unification Germany gave up the two great symbols of post-war success and stability: the Deutschmark and the Basic Law. But it actually doesn’t seem illusory to think that if all parties and elites put their weight behind a new German European constitution, a referendum on it could be won (although Merkel is notoriously cautious and likes to lead from behind). Incidentally, such a development could still be justified through constitutional patriotism, since the latter isn’t about a particular document but about political values, which might now be better realized in a united Europe.

Esprit: Does Angela Merkel’s European policy represent a change or is it consistent with a form of German bipartisan consensus on economic strategy – Schroeder’s reduction of the welfare state, wage-capping, deficit control, export strategy?

J-WM: This is a complex matter, not least because German self-perceptions and views of the country from the outside often radically diverge: many German political observers think that a broad de facto social-democratic consensus exists which includes the CDU, and that there is neither real conservatism nor real neoliberalism in Germany. But in the eyes of some cultural critics, such as Karl Heinz Bohrer, Germany is a country of Nietzschean last men, sleepy and happy with their comforts, unwilling to engage with the rest of the world, let alone take any real risks – and, if anything, eager to unload risks to others, for example by opting out of nuclear energy while importing it from others. Of course, from the outside, Germany looks like a neoliberal country (in the original sense of the term, not simply as a vulgar synonym for Wall Street greed): free markets which are also closely supervised to avoid monopolies; discipline for governments but also for labour; anti-Keynesianism, etc. Germans think they have done well with this strategy and are unlikely to want to change it because of vague talk about the values of European solidarity. The forces challenging the German mainstream can now be found in something as peculiar as the “Pirate Party”, which is all about civil rights, especially individual liberty and government transparency, and has no clear economic agenda. If the example of the Greens is anything to go by, even the Pirates might become integrated into the party system and become more moderate – but ultimately also reinforce what surely is the ultimate peculiarity of Germany today: a real disjunction between a neoliberal economy, an increasingly left-leaning party spectrum and, lastly, published – not public – opinion which, if anything, is much more right-leaning than in the old Federal Republic. A very strange combination, but not so obviously a structural contradiction.

Join us online for the 31st European Meeting of Cultural Journals
14 November 2020, Saturday

The myth of affordability

Rents are usually considered affordable when below around a third of a household’s income. But this rule of thumb is tailored to middle-class homes, ignoring the financial realities of low earners who struggle to cover necessities.

The increasing use of facial recognition software by security services introduces a new era of surveillance. With it, public anonymity can be eliminated in a stroke. So why does the recent EU white paper on AI make no reference to the democratic risks posed by the new technology?