The emergence of a new Ukraine offers an opportunity to reinvigorate the European project and reaffirm its ideals of union, solidarity, democracy and peace. A strong, successful Ukraine protects against a democratic backslide in the east of the continent. With this in mind, Eurozine is coordinating a media exchange project in partnership with the Open Society Initiative for Europe, OSIFE, that links independent media in Ukraine with “alternative” media in five countries in western Europe: Germany, France, Spain, Italy, and Greece. The aim is to promote critical, informed and nuanced voices that counter the dominant discourse of crisis concerning Ukraine.

The project raises awareness among media professionals and journalists of social, political and cultural debates in Ukraine, and supports them in providing a multifaceted and diverse image of Ukraine to readers and viewers. By facilitating the exchange of media products (articles, TV-reports) between Ukrainian media and media outlets in the target countries, the project introduces an international public to debates in Ukraine on topics such as human rights, the environment, the refugee crisis (both within and outside Ukraine’s borders), labour law and union rights, austerity politics, cultural policy and LGBT rights.

Through a journalists’ exchange programme, journalists will have a unique opportunity to produce reportage, make contact with their Ukrainian colleagues and gain insight into the topics and debates most relevant to them. In the long run, the project is geared toward establishing strong and reliable relationships between journalists and media in Ukraine and European countries that result in long-term media co-operations and widely disseminated reportage about developments in Ukraine beyond crisis communication and the Russia-Ukraine conflict. 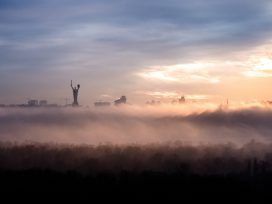 The war in Ukraine, and the fight for minds

There are few places where the new East-West conflict can be observed so clearly as in Kyiv. The weapons are money, networks and propaganda, writes Harald Neuber. He reports on the silent battle for hearts and minds that’s carried out in public but orchestrated from behind the scenes.

The shadow of the far Right in Ukraine

The far Right continues to capitalize on the extremes of the conflict in eastern Ukraine and the country’s deepening economic crisis, writes Kostas Zafeiropoulos, even as key elements at this end of the political spectrum regroup.

Ordinary global brutalism: Or, made in a Ukrainian superblock

The real costs of increasing social inequality are plain for all to see in Ukraine, and not least in Kyiv’s superblocks. But here too, there is a resilience that has to be seen to be believed. Not content with TV reports and YouTube clips, Adeline Marquis pays one such superblock a visit.

One of the legacies of the Maidan in Kyiv is a subcultural revolution that retains its momentum to this day, albeit under increasingly precarious circumstances. Luigi Spinola talks to the DJs, entrepreneurs and politicians who know the scene best.

Every generation of Ukrainians is confronted anew with the country’s historical traumas. However, Ricardo Dudda reports on the dangers of the past distracting reformers’ attention away from Ukraine’s future, especially where Russian propaganda seeks to distort the historical record.

Some splashes of colour against the war

Sloviansk is a grey city in eastern Ukraine. This was already the case, before pro-Russian separatists occupied it and the Ukrainian army brought it back under Kyiv’s control. But young people are now attempting to add some splashes of colour to the wasteland, not far from the frontline. And not only with paintbrushes. Above all, they want to change people’s mentality.

The contradictions of a revolution

Ukraine was ranked 107th out of 180 countries in this year’s World Press Freedom Index. An improvement on 2015, but still indicative of the serious threats that the country’s journalists face. Cecilia Ferrara takes stock of recent developments in the new media landscape.