I want to concentrate on three things that apply to the situation in Britain and Brexit, which I think apply to a lesser degree elsewhere in Europe, and then pull back briefly to grasp the context in which they came together to make Brexit possible. But if there is a broad theme here it is dishonesty – a false narrative about who we Britons are and who we might be and how the debts finally came due for that dishonesty.

The first is immigration. Britain has always been a home to immigrants, but immediately after the Second World War there was a significant surge. Some immigrants came from former colonies – particularly in the Caribbean, Australia, South Africa, Africa and Asia – though initially more came from elsewhere in Europe – Ireland, Italy, Cyprus, Poland, the Baltic States.

Throughout the post-war period the British political establishment refused to engage intelligently with the issue. For decades the issue of race – the colour of people – was generally interchangeable with place – the movement of people. Even when more than half of all Black people in Britain were born there they were still understood as immigrants. The right would stoke prejudice because they knew that’s how they get votes; the Left would indulge it because they knew that’s how they would lose them. The upshot was that precious few in the UK understood what immigration is for, what drives it, or who benefits from it and why.

We did not talk about the wars, trade deals, arms sales, environmental devastation – in which we are complicit – that made people move. Nor did we discuss the needs of an ageing population, or the low wage economy with a creaking welfare state that made immigration so necessary. To provide just one example: the National Health Service made Britons more proud to be British than the monarchy. But without immigrants, the NHS would not be possible. In 1971, 12% of British nurses were Irish nationals; by the turn of the century 73% of family doctors in the Rhondda valley in Wales were south Asian. 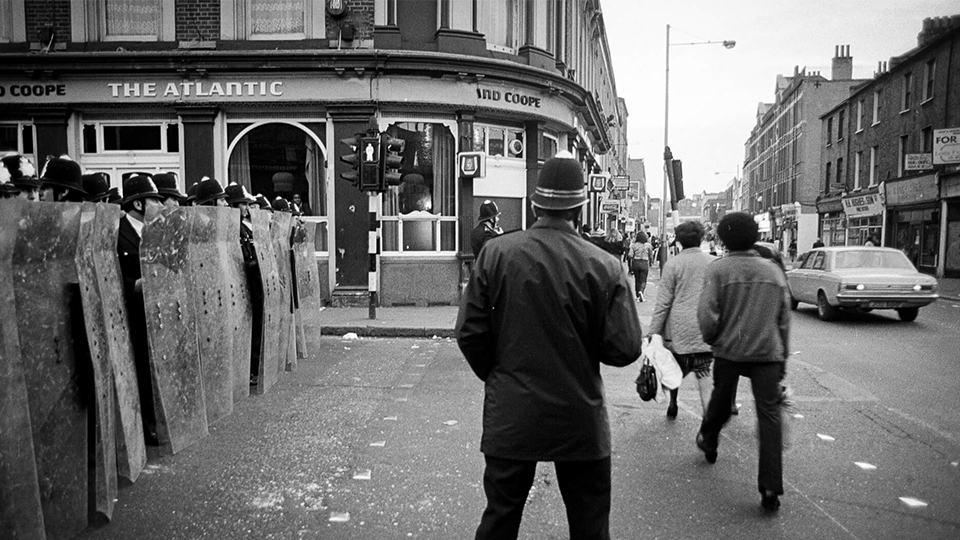 Police with riot shields form a cordon across Atlantic Road at its junction with Coldharbour Lane, 11 April 1981
Photo by Kim Aldis from Wikimedia Commons

We were ignorant. Today, three-quarters of Britons think immigration should reduced. But then they also think migrants comprise 31% of the national population, when the actual number is 13%. No wonder they’re scared. If I thought a puppy was more than twice the size of an actual puppy, I might be scared of puppies.

When the Brexit referendum arrived, we paid the price for the all the difficult debates that had been avoided and the easy roads that had been taken.

Second, there is multiculturalism. In this there was both fact and fiction. The multiculturalism of fact must start from the basis that it is not the same as race or religion. If you took all the black and brown people out of Europe and all the non-Christians, it would still be multicultural. Look at what is happening in Catalonia right now; look at what might happen in Scotland if the UK leaves the European Union. For more successful examples, look at the multi-lingual Swiss, the regional variations of Italy, the revival of the Welsh language and the peace process in Ireland. Europe was never a monoculture and when it comes to race, and religion, we have great examples of success and important examples of failure. Either way, the multicultural nature of Europe is a fact, and race and religion are only part of it.

The multiculturalism of fiction evokes a liberal, state-led policy of encouraging and supporting cultural difference at the expense of national cohesion. In most of Europe, no such co-ordinated policies ever existed. In many places where ‘multiculturalism’ is being read its last rites, it never actually lived in its professed form.

But references to it are everywhere, stirring moral panic. ‘Liberal dilemmas’ abound over issues like freedom of speech or women’s rights. Take the decision in September 2005 of the Danish newspaper, Jyllands Posten, to publish 12 cartoons, some of which depicted the prophet Mohammed, some of which were deeply offensive. When Muslims protested, we were told they didn’t understand freedom of speech. But protesting things you don’t like – so long as you do it peacefully – is freedom of speech.

‘This is a far bigger story than just the question of 12 cartoons in a small Danish newspaper,’ said the paper’s culture editor, Flemming Rose: ‘this is about the question of integration and how compatible is the religion of Islam with a modern secular society.’

He was right in one sense. It was a far bigger story. Just not the one he was selling. In fact, it was a tale of power, hypocrisy and a crippling lack of self-knowledge. Just two years earlier, Danish illustrator Christoffer Zieler offered the paper a series of unsolicited cartoons providing a lighthearted take on the resurrection of Christ. He received an email saying, ‘I don’t think Jyllands-Posten’s readers will enjoy the drawings. As a matter of fact, I think they will provoke an outcry. Therefore I will not use them.’

The question wasn’t whether you could or should draw the line when it comes to religious tolerance and freedom of expression, but where you draw it and who counts and who doesn’t. The bigger story was about the notion of integration as it is understood in the current western model – namely who are you trying to integrate, what are you trying to integrate them into, and on what basis? Since the turn of the century, the British establishment has stoked fears about whether national culture could withstand the integration of Muslims – of whom 70% voted for remain – and paid far too little attention to how to integrate the white working class into the British economy.

Gary Younge in conversation with Susan Neiman and Jan Plamper at the 2019 Eurozine Conference.

Third, there is Empire. I am minded here of the Danish finance minister, Kristian Jensen who said, ‘There are two kinds of European nations. There are small nations, and there are countries that have not yet realized they are small nations.’

Britain is the latter and this painful Brexit process is teaching us how small we are. Since Suez, Britain has struggled with its place in the modern world. Nostalgic about its former glory, anxious about its diminished state, forgetful about its former crimes, bumptious about its future role, it has lived on its reputation as an elderly aristocrat might live on his trust fund – frugally and pompously, with a great sense of entitlement and precious little self-awareness.

Brexit was, in part, an expression of this. They wanted to put the ‘Great’ back into Great Britain. But that is not a plan, it is a slogan – and a delusional one at that. When it came to negotiations, they assumed we could dictate the terms; we can’t. They assumed we could just walk away; we can’t. They had no more plans for leaving than a dog chasing a car has to drive it. They are now finding out how little sovereignty means for a country the size of Britain in a neoliberal, globalised economy beyond blue passports (which are made in France and we could have had anyway).

All European states struggle with the first two challenges – immigration and multiculturalism – as it relates to honesty, anti-racism, pluralism and inclusion. The latter is the burden of a few former colonial powers – primarily France, Belgium, The Netherlands, Portugal – each of which struggles in its own way.

Finally, all of this has taken place in a period when nation states have struggled to assert their will as the primary democratic entity against the might and scale of neoliberal globalisation – a system that ensures that, whomever you vote for, capital gets in. And most recently, during a massive economic crash in which the poorest paid the most for the follies and greed of the wealthy. These too are general problems.

However bizarre Britain appears – and it does appear bizarre – it would be hubris to think that the four horsemen of modern-day political culture: nationalism, racism, alienation and distrust, do not stalk the rest of the continent.

‘The crisis consists precisely in the fact that the old is dying and the new cannot be born,’ wrote Antonio Gramsci. ‘In this interregnum a great variety of morbid symptoms appear.’ Brexit is a symptom of a broader crisis affecting us. In that sense, we are more European than we would like to admit.

‘Ord&Bild’ publishes a big issue on India and Europe. Including articles on the Europeanization of novelist Nirmal Verma; Akbar’s forgotten multiculturalist legacy; the silent suffering of refugee filmmakers; existentialism in Indian literature; and faith in Hindi cinema.