The 30th European Meeting of Cultural Journals took place in Berlin, Germany from 1 to 3 November 2019. The meeting was organized by Eurozine, together with Berlin-based Eurozine partner journals Blätter für deutsche und internationale Politik and Osteuropa, in cooperation with Heinrich-Böll-Stiftung and co-funded by the Bundeszentrale für politische Bildung and the Creative Europe Programme of the European Union. The conference brought together representatives of Eurozine’s partner journals and associates, journalists, researchers and other culture and media professionals. Parts of the conference programme were open to the public. In all, more than 400 people attended the event. 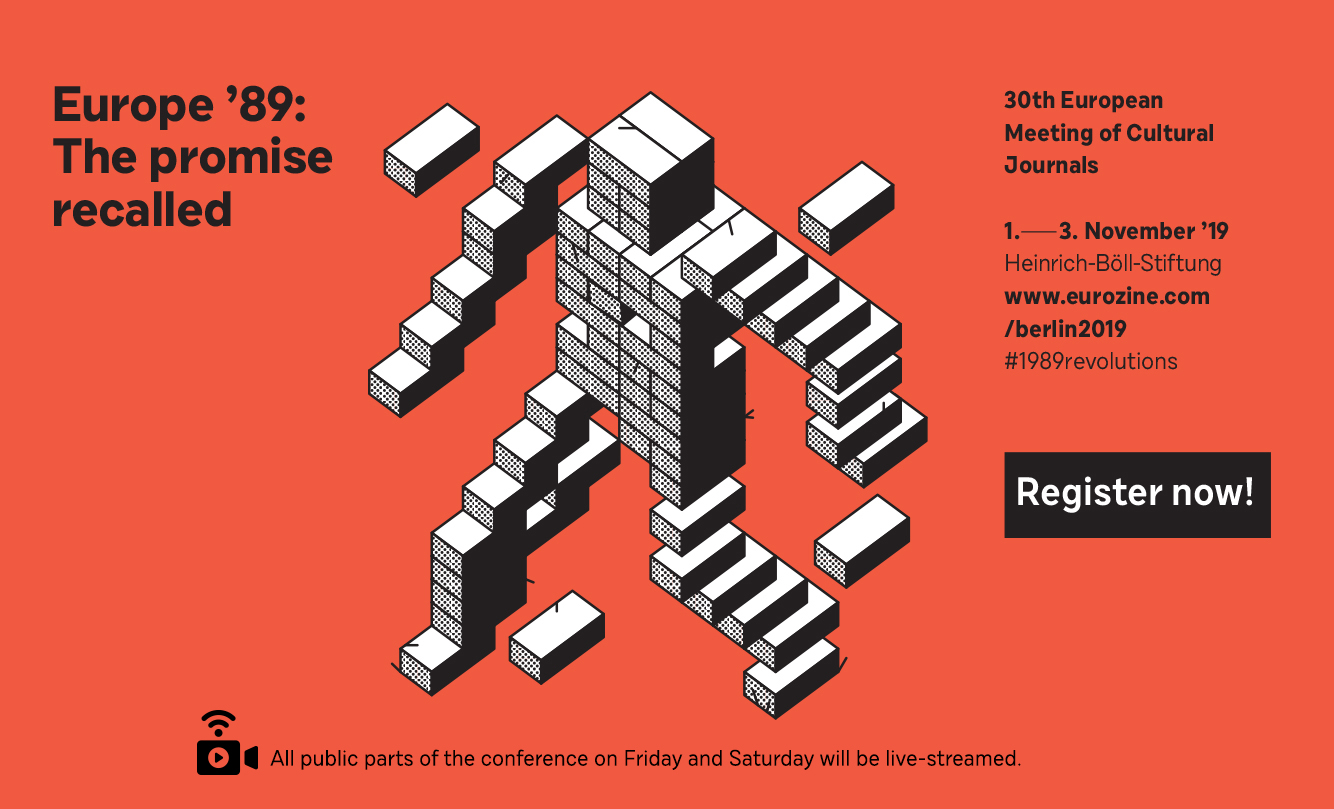 Thirty years ago the wave of peaceful revolutions swept across central eastern Europe. Country by country, and with breath-taking speed, four decades of Soviet rule came to an end. For all their diversity, the revolutionary movements were united in a belief in Europe – defined not only as an end to the division of the continent but also as a return to the path of democracy and self-determination.

This year’s European Meeting of Cultural Journals recalls the ideas expressed in 1989 and retraces the development of Europe since. In turbulent times, scholars, writers and activists will reflect on the successes, but also the failures of the last three decades: for the first time ever, a member state is exiting the Union; new boundaries are being drawn within the EU and lines of conflict are becoming ever more entrenched; social-economic inequalities are growing; national identity and sovereignty are pitted against institutions and individuals advocating for a liberal and more social European Union; and across the continent, populist rightwing movements and parties increasingly set the tone. They deliberately encourage distrust in the political system, its representatives and the media – and have trained their sights on parliamentary democracy itself.

All the more important for us to maintain and strengthen transnational discourse within the European public spheres. Together with its partners, this year’s European Meeting of Cultural Journals will seek to form an alliance of learning and action for Europe, 30 years after ’89. And where better to do so than in Berlin, a city whose identity is uniquely bound up with the history of division and reunification?

The keynote, entitled ‘For an open country with free people: Germany and Europe 30 years after 1989’, was given by the poet and essayist Durs Grünbein, in conversation with the cultural and literary scholar Aleida Assmann. The discussion was moderated by Ellen Ueberschär, President of the Böll Foundation. Grünbein recalled the hopes and fears of the protesters in the GDR – how, amidst the euphoria, the fear of another Tiananmen loomed large in their minds – and how state socialism’s sudden end left a void soon to be filled by new, national narratives. Assmann offered reflections on how ’89 had brought a transnational revolution in memory and historiography, not only as the archives opened in the East but also in the West. Taking questions from the floor, the panelists discussed the impacts of ’89 on east Germany New Right, the meaning of ’89 for ‘European identity’, and what that year signifies for those on the EU’s peripheries – Ukraine, the Middle East – who are still waiting for their moment of freedom.

The processes set in motion by the disintegration of the socialist economy in eastern Europe eluded all analytical frameworks, he argued. It was a time of ‘wild thinking’, in which received ideas were reconsidered and values re-assessed. We are still living through this troubled era, Schlögel cautioned: fighting the fights of the present is harder than revisiting the fights of the past.

His reflections were followed up in discussion with Karolina Wigura, historian and editor of the Polish journal Kulturna Liberalna. The conversation was moderated by Réka Kinga Papp and focused on the intergenerational aspects of the legacy of ’89, particularly on processes of politicization and depoliticization. Wigura argued that in Poland, the political idiom of the liberal generation formed by the repressions of 1968 had come adrift from political realities, as a new wave of protest (black protests/candle protests) comes to the fore. Younger eastern Europeans, she argued, were rebelling against an ‘older generation with nothing left to say’. Schlögel responded by critiquing a ‘culture of suspicion’ at German universities, referring to the recent wave of intimidation and defamation of prominent older academics by a small but vocal far-left section of the student body. Both were able to agree on Schlögel’s key premise that understanding ’89 ‘phenomenologically’ meant departing from rigid analytical schemes; and that the focus on ‘strongmen’ obscured the view for undercurrents of social change.

In the afternoon, Historian Ferenc Laczó and Luka Lisjak Gabrijelcic (editor of the Slovene journal Razpotja) presented the upcoming volume ‘The Legacy of Division’ (CEU Press 2019), an anthology of articles published in the Eurozine focal point of the same name which they have curated.

Their talk was followed by a panel on ‘Belonging in Europe: Nation state, sovereignty and solidarity’, with Jan Plamper (historian, University of London), Susan Neiman (moral philosopher; director, Einstein Forum) and Gary Younge (journalist, author and broadcaster). The panel was moderated by Emilia Salvanou, historian and editor of the Greek journal Historein. Younge began with an impressive set of reflections on Brexit – the price Britain is paying for the failure to hold an honest discussion about immigration, multiculturalism and Empire. That said, it would be a mistake to think that the UK’s problems are without equivalent elsewhere, Younge concluded. The subsequent discussion circled around failures of the Left since ’89 to articulate a positive set of ideals (Neiman), a concept of civic nationhood (Plamper) and a grand narrative of Europe (Younge).

The historian Philipp Ther then took the floor to discuss the effects of the economic restructuring on the European project and more the impacts of crisis of the 2008/2010. Ther’s central thesis: that contra the myths of ‘shock therapy’, transformation was not a one-way street. Rather, it is best defined as a set of ‘neoliberal feedback loops’ between East and West. Transnational convergences accompanied growing internal inequalities, the partial success of neoliberalism taking their toll on peripheries. Today, the pull of populism rests on the promise to protect the losers of neoliberalism from economic relegation, raising the question (unanswered): why did the pendulum not swing to the democratic left?

The final part of the Saturday program sought to ‘recall’ the promise of ’89 by ‘bringing it into the present’. The political scientist Claus Leggewie discussed the future of protest movements with activists Dóra Papp (civic campaigner, Hungary), Radu Vancu (‘We See You’ Movement, Romania) and Helena Marschall (Fridays For Future, Germany). Reflecting on connections between protest, parliamentary forces and social change, the panelists talked about the different types of issue they are addressing in their campaigning: coordinating a fragmented and disoriented opposition through election ‘primaries’ held online (Papp); pressurizing government to withdraw an emergency decree decriminalizing corruption (Vancu); and demanding effective policymaking on climate change in 120 countries simultaneously (Marschall). Numerous members of the audience took up the invitation to join the panel and share their own experiences of activism.

The final conference day begun with a discussion between Ivan Krastev (political scientist, Institute for Human Sciences in Vienna) and Holly Case (historian, Brown University) on ‘The light that failed? Liberal democracy and Eastern Europe’. Krastev recalled the excitement of entering an opening system, the sudden encounter with historical context and the experience of simultaneous cohabitation with the West. Recalling her own fragmentary memories of post-socialist Hungary, Case questioned relations between the ‘creation of the real’ and the ‘role of the material’. Krastev, elaborating on the core theses of his book, talked about the failures of modernization theory and deterministic models of development, as states emerging from socialism rebelled against the compulsion to imitate the West.

Outside the public parts of the conference, Eurozine partner editors shared experiences and discussed editorial and publishing matters, with a plenum meeting on Friday afternoon, chaired by Eurozine’s managing director Filip Zielinski, and a set of workshops on Sunday. Workshop topics included ‘cultural journals and social media’, ‘advocating for cultural journals’ and more. 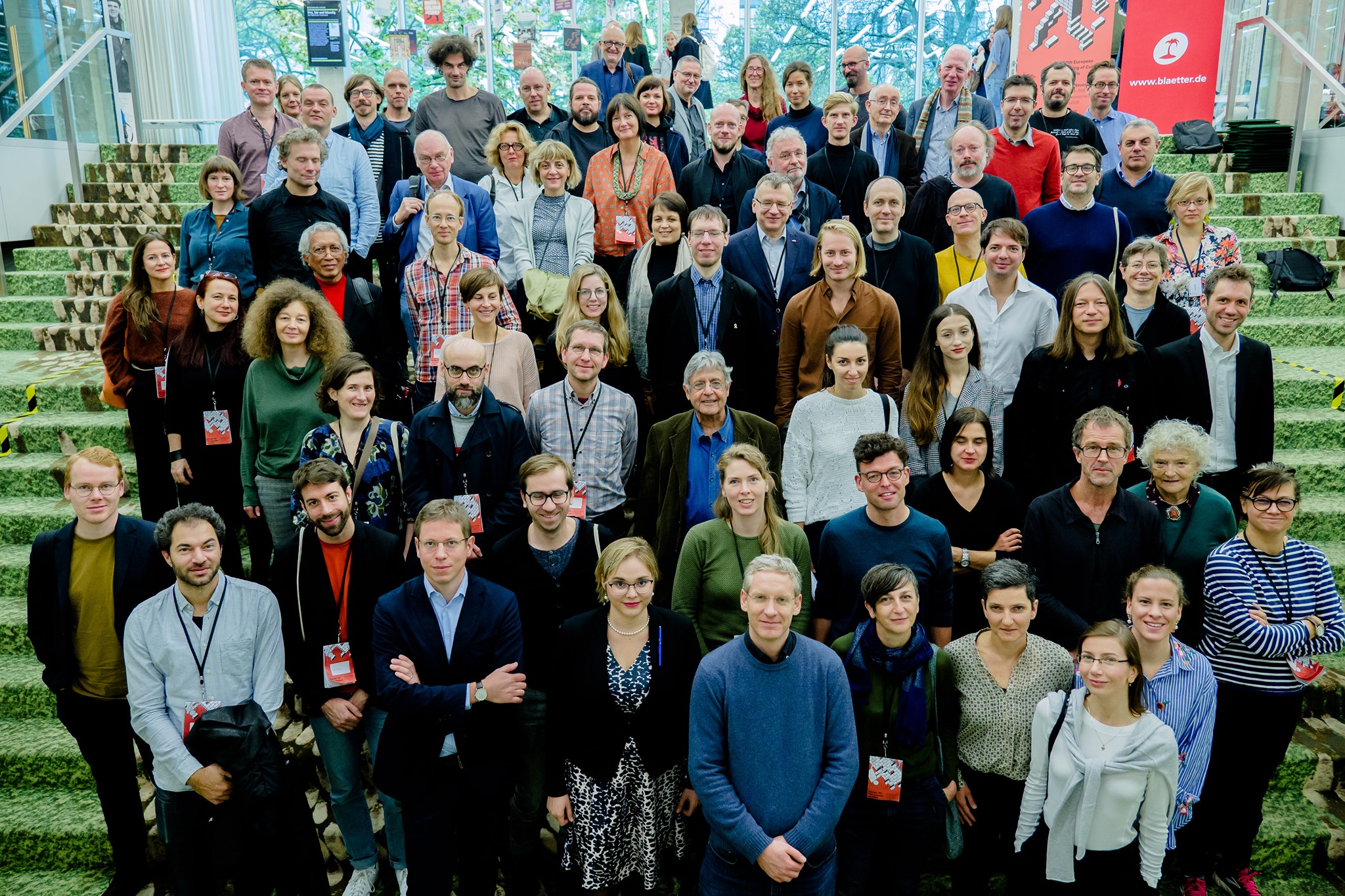 The legacy of division: East and West after 1989
When the Cold War came to a sudden end thirty years ago, the two halves of Europe declared in unison their intention to overcome the legacy of the division. Today, the hopes and ambitions of those heady days can be viewed as unrealistic at best. But is talk of a new East–West divide justified? A new Eurozine focal point asks what happened to ’89 in the intervening years. Read more here.