In the August issue of ‘Blätter’: contributions on the German Catechism debate, the propaganda of technological ‘manageability’, the return of hard borders, and nostalgic anti-liberal democrats.

In Blätter, Micha Brumlik responds to Dirk Moses’s controversial article ‘The German catechism’, published in May on the Swiss website Geschichte der Gegenwart. Moses argued that Holocaust memory serves a quasi-religious, redemptory function for the German nation. This function is threatened by more recent global histories of genocide that place the Holocaust in the context of colonial racial violence, where according to Moses it belongs. To question the ‘singularity theory’ – and the theory of the singularity of German guilt – is to undermine a political understanding between German, Israeli and US elites, according to which Germany is accepted into the international community so long as it observes its unconditional responsibility towards the Israeli state. The catechism is policed by conservative cultural elites and state ‘antisemitism commissioners’, who equate any criticism of Israel with antisemitism and censor accordingly. 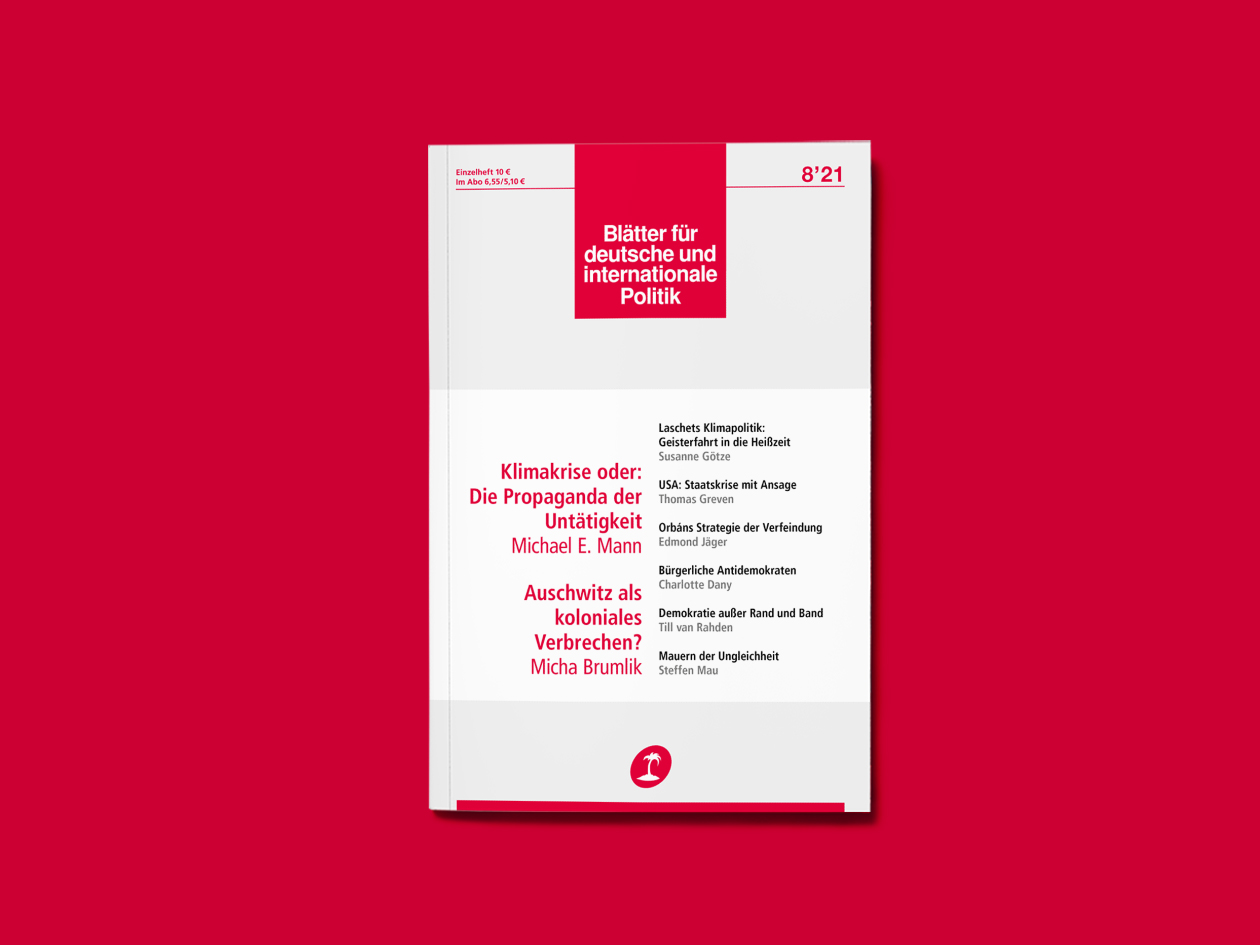 This anti-free speech tendency is drawing criticism from liberal elites in Germany, who reject the IHRA definition of antisemitism, which has been recognized by the German parliament and universities. More problematic still, the ‘German catechism’ alienates ‘new German and non-German’ populations, who are expected to solidarize with Israel but forbidden from identifying with international Islam. These reactions indicate that the ‘catechism’ is losing its integrative function for German society and needs to be replaced by a historical narrative in which the Nazi equation of ethnicity and citizenship is brought into relation with racism in all its forms.

Without dismissing Moses’s claims about the political function of Holocaust memory in Germany, Brumlik notes that the article has provided a vehicle for identitarian ‘ethno-pluralism’ – according to which, the ‘catechism’ has furthered a false policy of assimilation – and the wider far-right critique of Holocaust memory culture. However, Brumlik’s main focus is on Moses’s empirical arguments, with which he broadly agrees. Recent research on, for example, the influence of early 20th-century German eugenicists on ‘concentration camp doctors’, or on the origins of modern, atheist antisemitism in late 19th-century biologistic conspiracy theory, broadly support Moses’s arguments. But a direct connection between German colonialism and Nazism is harder to prove. For example, it is difficult to establish  linearity between the Nuremberg race laws and the miscegenation laws of German colonies, while the history of colonialism fails to account for the redemptory function of Nazi antisemitism for the German nation.

While Jean Améry’s warning about an all-too straightforward theory of continuity subsuming the Holocaust under a ‘century of barbarity’ is no less pertinent today than it was in the 1970s, the notion of the Holocaust as ‘civilizational rupture’ is hard to sustain unless the Holocaust is seen as the culmination of an existing tendency. Brumlik asks: ‘Were the genocides and horrors perpetrated before the Nazi period by the colonial powers – Great Britain, France, Belgium, and the Netherlands – in their colonies really an expression of “civilization”? If so then “Auschwitz,” in all its singularity, must be seen as simply the climax of a trend that began long before – at the latest with the expansion of Europe towards Africa and the Americas.’

Climatologist Michael E. Mann on the propaganda of technological climate crisis ‘manageability’: the advocates of geo-engineering and ‘clean coal’ are merely furthering their own interests at the cost of the rest. Sociologist Steffen Mau on the return of walls: contrary to hopes after 1989, ‘hard borders’ are back between states where economic discrepancies are greatest. Political scientist Charlotte Dany on how the Hambacher Festival, the meeting point in the Rhineland for national liberals during the Vormärz, has become a rallying point for the far-right in Germany.