The use of rape as a weapon of war is not new. The army that terrorizes civilians and targets women today in Ukraine is the same one that has never had to reckon with its own horrific World War II crimes.

Since the first days of April, news have surfaced of horrifying crimes committed against civilians in the occupied cities of Ukraine. Images spreading across social media document atrocities that include the murder of civilians, torture, looting and rape. While these crimes are still in the process of being clearly documented, early reports of sexual violence suggest that victims include the very young, as well as older women unable to flee areas under siege.

The use of rape as a weapon of war is not new. The brutalisation of girls and women in conflict took place in Europe as recently as the 1990s during the Yugoslav Wars, where the majority of victims of Serbian perpetrators were Bosnian Muslims. In the wake of these conflicts in South-Eastern Europe, rape was recognised as a weapon of war. In 2008, the United Nations Security Council accepted Resolution 1820, acknowledging that ‘rape and other forms of sexual violence can constitute war crimes, crimes against humanity, or a constitutive act with respect to genocide.’ Notably as well, the International Criminal Tribunal for the Former Yugoslavia has charged dozens of men with crimes related to sexual violence. As of 2016, 32 had been convicted.

While some perpetrators of sexual violence during wars have been called to account in recent decades, far more have evaded justice. The Russian army has been accused of rape in conflicts in Chechnya, as well as Georgia. The targeting of girls and women by Russian troops, however, predates these wars. The lack of recognition of, or responsibility for, the mass sexual violence committed by the Soviet military during the Second World War creates conditions of acute risk in Ukraine today. 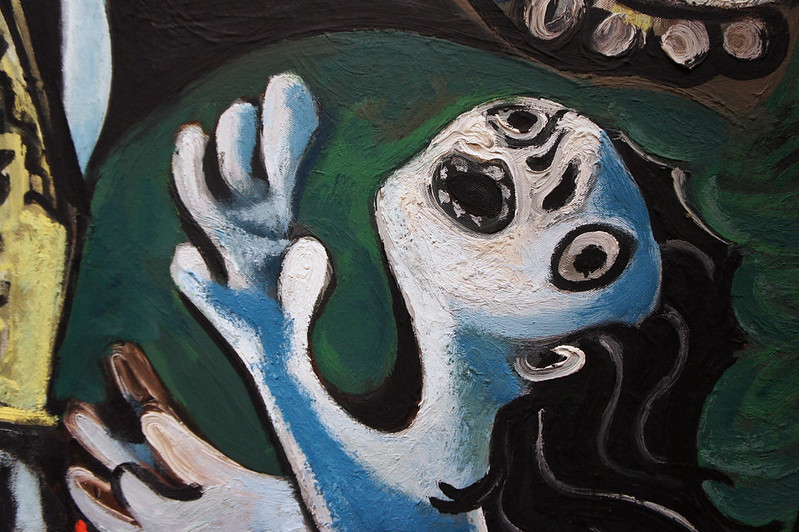 Pablo Picasso, Rape of the Sabine Women, 1963, Oil on Canvas Photo by Peter E from Flickr.

Historians like Antony Beevor have written about the Soviet army’s mass sexual assault on German girls and women at the end of the Second World War, when an estimated two million were raped. Many rapes occurred in the presence of horrified witnesses, including family members, extending the circle of those victimised by the assaults. Gang rape was common. Throughout the war, Soviet propaganda had been relentless in expounding the theme of vengeance against the fascist aggressor. As a result, rape, plunder and killings of civilians in Germany have been broadly explained as being motivated by revenge, and often fueled by alcohol.

In communist East Germany, an ally of the Soviet Union, state authorities forced victimised women to deny the rapes. Even in democratic West Germany, women’s stories were either rarely heard or outright ignored. In the 1950s, a German woman anonymously published her story of brutal post-war violence, including mass rapes, titled A Woman in Berlin. The book received a cold reception from the German public and largely disappeared from public view after the author refused to allow another printing in her lifetime.

For women, ‘political fear and shame – mixed with guilt about Nazi atrocities – created a kind of code of silence.’ Only at the turn of the millennium was the book reprinted in German and widely read. In 2009, a film version of A Woman in Berlin was released.

Another brutal crime committed by Soviet soldiers at the war’s end was the rape of Jewish women survivors of concentration camps, including Stutthof, Ravensbrück and Auschwitz-Birkenau. The Soviet liberators of camps and forced marches terrorised survivors, many of whom had already endured imprisonment and the loss of families and homes. One Czechoslovakian-born woman survivor recalled in an interview for the USC Shoah Foundation’s Visual History Archive, ‘…we were liberated, but this was a new battle.’

This archive, one of many that house the testimonies of Holocaust survivors, contains more than 500 references to sexual assaults at liberation, mostly by the Soviet military. A German-born survivor who had lived through years of Nazi imprisonment remembered in her testimony that on the evening she and her brother were liberated near Gdansk, she was raped by three or four Soviet soldiers:

You don’t think about it… you don’t talk about it… At that time, you didn’t speak about sex, about rape.

As has often been the case with sexual violence, it was the victims, not the perpetrators, who experienced shame.

The rape of Jewish survivors who endured Nazi ghettos, concentrations camps and forced marches is horrifying and unbelievable. After surviving years of Nazi savagery, why would girls and women be victimised by their liberators?

Survivor testimonies have been recorded over decades to ensure that the crimes of the Holocaust are remembered. Among the crimes documented in these testimonies are not only the genocidal atrocities of the Nazis, but also the violence committed by Soviet liberators against girls and women who survived the Holocaust. Testimonies reveal patterns of behaviour.

Some believed that after years of fighting, they were entitled to women’s bodies. A Czechoslovakian Jewish survivor recalled being told, ‘I freed you and you are mine. I can do anything I want with you.’ Some testimonies attest that even dangerously fragile survivors freed from Nazi captivity were at risk of sexual violence:

[Soviet troops] were in the war for who knows how many years… they didn’t care, you had one eye, one foot in the ground, they stretched you out on the ground and they laid on you, they raped you.

Many Soviet soldiers were suspicious of those who survived Nazi camps. Throughout the Second World War, authorities propagated the idea that falling into the hands of the Nazis meant certain death. Nazis and their local collaborators murdered millions of Jews in Europe. Some prisoners, however, lived to see the end of the Holocaust and the conflict.

Many testimonies recount that Soviet troops were suspicious of the prisoners they liberated because of their survival. Troops who assaulted women wrongly accused them of being ‘left alive because [they] were living with Germans’. A German-born survivor recalled her liberation by Soviet troops near Gdansk:

We were suddenly free. But our joy was short-lived… we told them that we were Jewish and had come from a concentration camp. But they would not believe us.

Her account suggests that German Jewish women may have been at particular risk because to the Russian liberators, ‘we were Germans, not Jews.’

Newly liberated women tried to evade the pervasive threat of sexual violence by Soviet troops. Some women hid as best they could, while others disguised themselves as boys, or as old women. Some even claimed to have a contagious disease. A Polish-born survivor recalled that after liberation, she and other women in her barrack barricaded the doors and, using pencils and paper found in an abandoned SS office at the camp, wrote ‘typhoid fever’. They then secured their signs to the doors to discourage the aggressors. She added:

This is why I say, women’s experiences were different than those of men… We had to hide, afraid to be raped. That was our liberation.

Neither the Soviet military nor political authorities showed an inclination to act against sexual violence. Joseph Stalin is rumoured to have said in response to information about Red Army rapes in Yugoslavia, ‘What is so awful in his having fun with a woman?’ Historian Alexander Werth’s book on World War II quotes a retired Russian major: ‘…Our fellows were so sex-starved that they often raped old women of sixty, or seventy or even eighty – much to these grandmothers’ surprise, if not downright delight.’ The cost of this military culture of impunity was paid in women’s lives.

Many decades later, authorities have yet to acknowledge that officers and soldiers engaged in mass sexual atrocities against girls and women during the Second World War. In Russia today, uncritical veneration of Soviet heroism is a key characteristic of political pronouncements, historical accounts and public rituals.

The Russian army’s attack on Ukraine in February has created conditions that recall the Second World War. This includes the violent transgression of sovereign borders, the mass flight of civilians and sexual violence committed by invading troops. There is detailed evidence from Crimea and the Donbas, the territories of Ukraine occupied by Russia since 2014, that sexual and gender-based abuse has been committed against prisoners held in detention.

The wider war initiated in 2022 has brought Russian troops into close contact with civilians in public spaces and private homes. Ukrainian girls and women are clearly at grave risk of sexual violence from an army that has never had to reckon with responsibility for its atrocities. It is incumbent upon decision-makers within the international community to hold those responsible for sexual crimes to account, and to finally ensure that it is the perpetrators, not the victims, who are shamed.

Sharing dinner with her persecutor: How one grandmother’s story testifies to the unexpected horror of forced migration and genocide. From the 19th century and WWII to today’s annexation, Crimean Tatars have faced a long history of oppression but continue to speak out against Russian colonization.